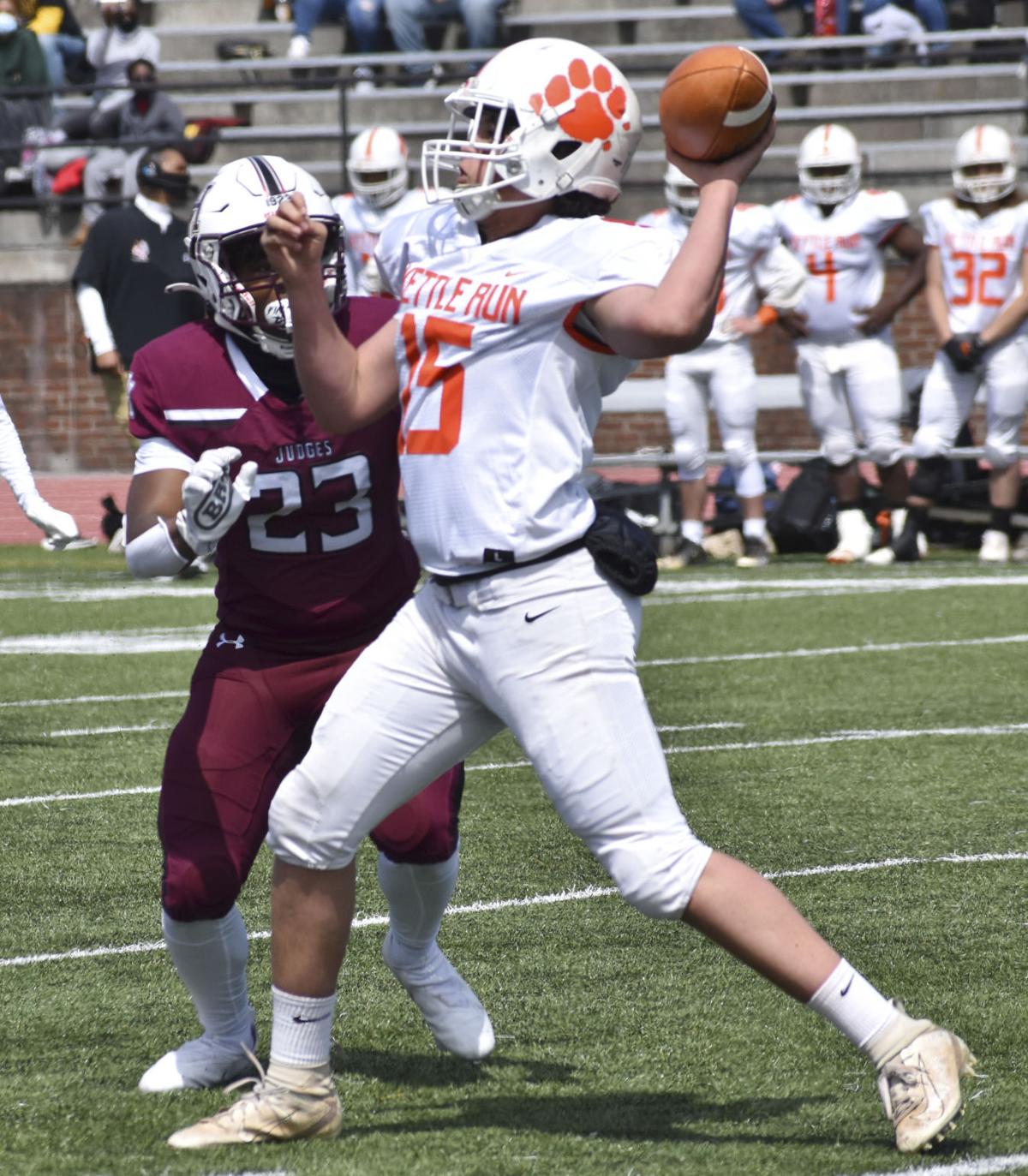 Kettle Run quarterback Elijah Chumley gets rid of the ball before Handley’s Julius Darling arrives during Saturday’s game at James R. Wilkins Jr. Stadium. Chumley threw for five touchdowns in the Cougars’ 39-21 win over the Judges. 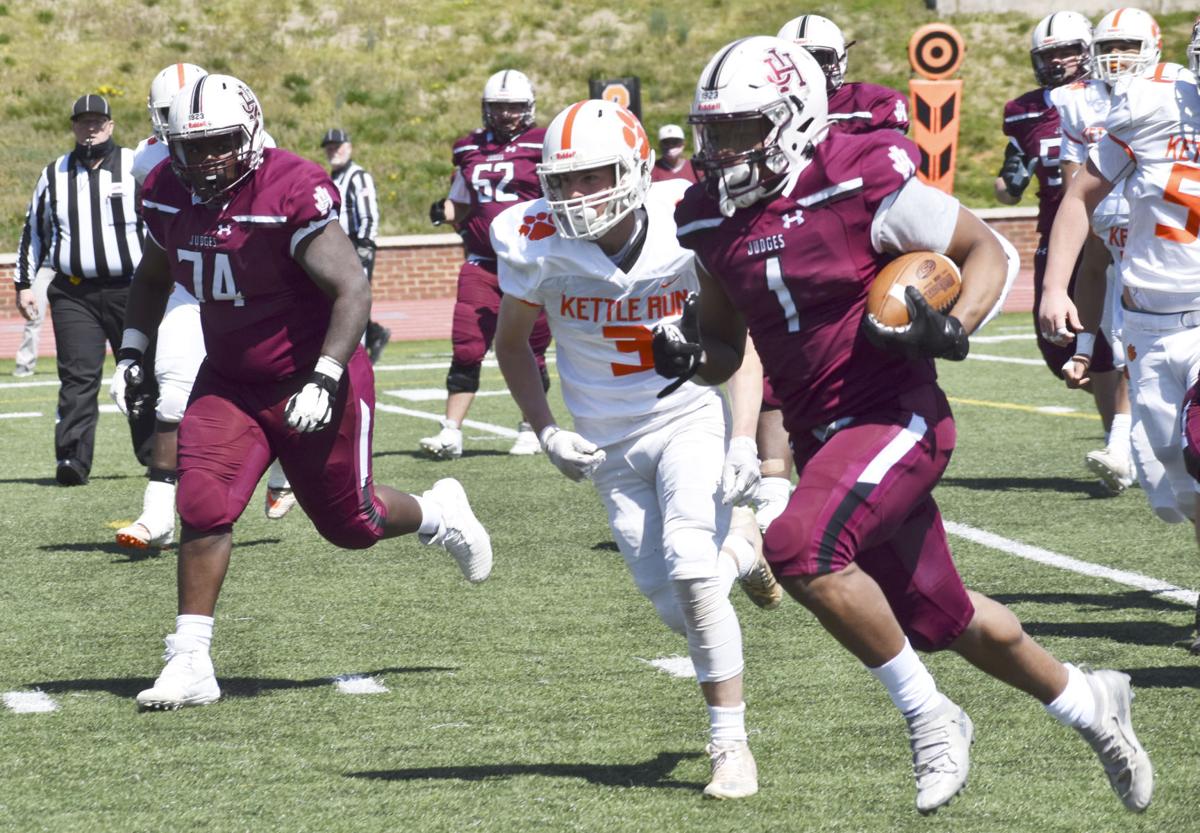 Handley's Dayvon Newman breaks away for a 14-yard touchdown run in the second quarter against Kettle Run on Saturday. Newman had two touchdowns in the Judges' 39-21 loss.

Kettle Run quarterback Elijah Chumley gets rid of the ball before Handley’s Julius Darling arrives during Saturday’s game at James R. Wilkins Jr. Stadium. Chumley threw for five touchdowns in the Cougars’ 39-21 win over the Judges.

Handley's Dayvon Newman breaks away for a 14-yard touchdown run in the second quarter against Kettle Run on Saturday. Newman had two touchdowns in the Judges' 39-21 loss.

He certainly seems to have some of the qualifications needed. As a quarterback, he is skilled at letting it fly and he knows how to use his weapons.

Chumley threw for a career-high five touchdown passes and ran for another score as the unbeaten Cougars knocked off Handley 39-21 for the Class 4 Northwestern District title at James R. Wilkins Jr. Stadium on Saturday afternoon.

Handley probably has seen enough of Chumley, who threw for three scores and ran for two more in Kettle Run’s 48-14 win in Week 1. On Saturday, Chumley completed 10 of 14 passes for 230 yards and threw for three TDs in the first half as the Cougars overcame a 14-7 Handley lead early in the second quarter.

Like he did in their first matchup, Chumley neutralized Handley’s strong pass rush by getting rid of the ball quickly to his talented weapons at receiver.

“It’s tough,” Handley defensive end Stephen Daley said of stopping the Cougars and Chumley, who was 17 of 26 for 316 yards with an interception. “They’re well-coached and that quarterback can get the ball out so quick. Anybody he throws to is pretty good after the catch. They can make a move. They are all fast and have good hands.”

“We have a lot of speed and we have playmakers,” Chumley said. “They are all playmakers, but they have different qualities.”

Handley entered the contest with 10 sacks, but could not get to Chumley for the second time this season.

“He pre-snap reads it,” Handley coach Dan Jones said. “They execute so well that he probably knows where he’s going to throw it before they snap the ball. That’s why he’s so good — he’s smart and the scheme is good. They take what you give them in a sense. It’s tough. It’s hard to get to him.”

“He’s done a great job distributing the ball,” Kettle Run coach Charlie Porterfield said of Chumley. “He has the understanding that he doesn’t have to win the games by himself. He has weapons and as long as he can get the ball to them we are going to have a shot.”

Chumley quickly set the tone Saturday, going 6 for 6 on the game’s opening drive that concluded with an eight-yard TD toss to Jordan Tapscott, who had five catches in the 80-yard march.

But Handley rebounded thanks to some help from the Cougars and its defense. After the Judges got a stop, Kettle Run snapped the ball way over punter Andrew Piercy’s head and he fell after a 32-yard loss to the 4. Dayvon Newman rushed in from the 1 to tie the score at 7-7.

Handley’s defense then held Chumley short on two consecutive carries with less than a yard to go and the Judges took over at the Kettle Run 30. Newman carried three straight times and waltzed in from 14 yards out. Adam Pollak’s extra point gave the Judges the lead with 10:26 to go in the half, but that lead would only last 18 seconds.

On second down, Chumley hit Ahmal Williams streaking down the left sidelines for a 72-yard TD strike that made it 14-14.

“I always go to Ahmal,” Chumley said. “I’ve thrown with him a lot this offseason. He’s just a speedster. I thought I’d give him a chance and just put it up there and the line held up.”

The TD toss immediately flipped the momentum back into Kettle Run’s favor.

“Momentum is so big in high school,” Jones said. “When you get it and if you can ride it good things will happen. When a team turns around and takes it right back, it’s almost worse in a sense because your roller coaster is a lot worse then theirs is.”

When Kettle Run got the ball back, Chumley struck again in two plays, with Alden Williams, Amhal’s twin brother, beating the Handley defense down the middle on a 55-yard TD reception.

Trying to take away the short routes, the Judges got burned deep.

“We make people have to cover the whole field,” Porterfield said. “If we’re hitting those tight things, we know it’s going to open up the deep throws.”

Chumley’s one-yard TD run with 35 seconds left in the half capped a short 29-yard drive after the Judges were hemmed in deep by a good punt. The Judges blocked the extra point and trailed 27-14 at the half.

Taking over after a Handley punt at their 33, the Cougars marched 67 yards to tack on another score to open the third quarter. Chumley was 3 for 3 on the drive and Ahmal Williams went the final 40 yards with a screen pass to make it 33-14 with 5:04 left in the period.

In the fourth quarter, Tapscott picked off an Aidan Haines toss and on the next play was on the receiving end of Chumley’s fifth TD pass from 22 yards out that made in 39-14 with 6:11 to go.

Handley got a little spark when Chris Milotte came in and threw a 58-yard TD pass to Jayden Vardaro (5 catches, 129 yards) and Julius Darling recovered the onside kick with 4:46 to go. But the Judges couldn’t get anything going and had two turnovers down the stretch.

Newman rushed for 77 yards and two TDs on 17 carries, but Handley struggled most of the game offensively. Jones said Kettle Run’s consistency is what he wants to see in his team.

“They just execute so well and that’s what we’re missing,” he said. “We execute well on some plays and on others we kind of miss one step. On offense, you have to have 11 guys execute to have a play be successful. On defense, it’s the same thing. Everybody has got to be on the same page.”

“We had a couple of mistakes that they had big plays off of,” Daley added. “We’ve got to work on it for next week.”

The Judges’ next face a tall task in defending Region 4C champion and 2019 state runner-up Tuscarora, but Jones is happy to have the opportunity.

“It stinks to lose your last game at home,” Jones said. “It stinks to lose at all, but the positive is that we’re still playing. A lot of teams are done. It’s 0-0 now and it doesn’t matter what the records are. If we play our best, then good things can happen.”