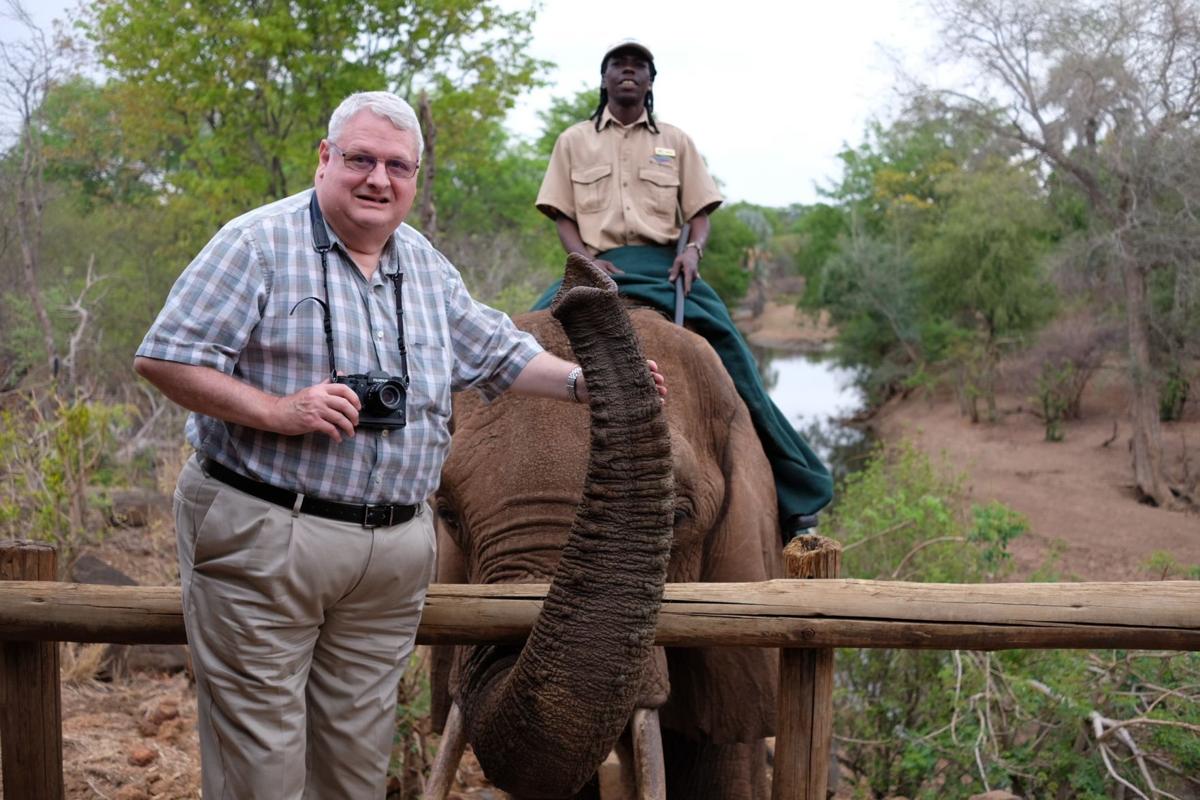 George Stone gets a greeting from an elephant during a trip to Africa. Stone was diagnosed with hemophilia as an infant. Now 67, the Frederick County resident says advances in treatment options let him travel more easily. 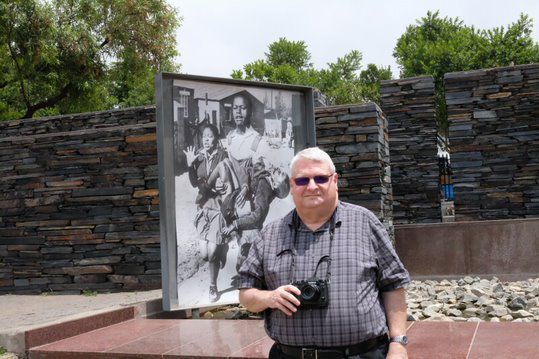 George Stone gets a greeting from an elephant during a trip to Africa. Stone was diagnosed with hemophilia as an infant. Now 67, the Frederick County resident says advances in treatment options let him travel more easily.

LAKE FREDERICK — An encyclopedia entry on hemophilia gave a young George Stone a bleak picture of what he could expect from life.

As Stone remembers it, he was about 9 or 10 years old when he opened the “H” volume to read about his blood disorder only to find out that he shouldn’t expect to live past 14 or 15 years old.

It’s a shocking thing for a child to read, but Stone’s heart goes out to his parents.

“Imagine what my parents were told at the time,” said Stone, now 67, retired from the federal government and living at Lake Frederick with his wife, Cyndi.

Because not only did Stone have hemophilia, so did his younger brother, Randy.

Hemophilia is caused when blood doesn’t clot properly. The rare condition is passed down from mothers to sons, although some cases show no family history. About 400 babies are born with hemophilia A, or classic hemophilia, each year, according to the Centers for Disease Control and Prevention. And estimated 20,000 to 30,000 Americans are living with hemophilia now, Stone said.

The Hollywood version of hemophilia shows someone dying from a bloody nose, Stone said, but that’s not the way it happens. The bleeds — which are painful — typically occur spontaneously in the joints and muscles. By his early school years, Stone had suffered 50 to 100 bleeds in each of his knees and ankles. The leg braces he wore made him a target for his classmates’ teasing.

“If I had to summarize hemophilia in one word it would be ‘pain’” — physical, emotional, financial, Stone wrote in a Facebook post during Bleeding Disorders Awareness Month in March.

There is no cure for hemophilia, but treatments have improved significantly during Stone’s lifetime. A boy born today with hemophilia (at least one whose parents have good insurance) shouldn’t have to endure the painful treatments and crippling joint deformities he had to.

When Stone was young, treatment was limited to stopping the bleeding after it began. If he developed a bleed, he would need an infusion of plasma, kept frozen at the hospital. “I had to take many trips to the emergency room,” Stone said. “Each time it was a four- or five-hour ordeal. I was a tough stick, and then it was drip, drip, drip.”

As he grew, more bags of plasma were required and the process took even longer.

But even though they had two sons regularly requiring lengthy hospital visits, Stone’s parents didn’t tell their boys to sit inside on down-filled cushions all day.

“You’re going to want to go outside and play ball,” Stone recalled his father telling them one day. “Sometimes it’s worth it and something it’s not. And you’ll have to decide. Your mother and I can’t be with you all the time.”

Stone and his brother delivered newspapers in their Connecticut hometown, learned to swim to strengthen their limbs and, yes, played ball sometimes.

By the time Stone was a young teen in the early 1960s, researchers had discovered that clotting factor could be pulled out of the plasma. A patient could stir the factor into sterile water and do the infusion at home. Instead of an infusion requiring 10 bags of plasma, it took just one.

“So I could have the benefit without all the volume,” Stone said. ‘’Once that happened, that gave me some independence.”

Stone was able to move on with his life, graduating from college and then moving to Washington, D.C., to study for a public policy degree at George Washington University. After working on Capitol Hill, he landed a job at the U.S. Department of Interior, where he worked until his retirement in 2009.

In 1981, he and Cyndi married — although he told her would understand if she didn’t want to make a commitment to someone so sick. They decided not to have children. “Sons would be OK, but daughters would be carriers,” Stone said. “We just didn’t want to go down that road.”

The treatment road still had many bumps. The bleeds eventually created bone-on-bone pain in Stone’s joints. He has had five joint replacements, including both his ankles and his right elbow. He got both his knees replaced when he was just 33 years old. “I think I got my money’s worth,” he said.

And then more bad news. The treatment designed to save his life put him in even more danger. In order to obtain enough plasma to extract sufficient clotting factor, there needed be lots of plasma — more than could be obtained by donations through nonprofit blood banks. It had to be purchased from people financially desperate enough to sell their plasma. By the early 1980s, 90% of hemophiliacs had been exposed to Hepatitis C and HIV, and roughly 10% had died, Stone said.

“There was a lot of litigation, and there was some settlements,” said Stone, adding that clotting factor is now created in a lab eliminating the need for paid donors.

Despite having to go through treatments for Hepatitis C and HIV, Stone considers himself fortunate because of the high quality of his medical care. As a government employee, he had excellent health insurance that covered expensive treatments. He sees a specialist in hemophilia at Georgetown University, where he benefits from the latest research and can participate in medical studies.

In late 2016, Stone’s hemotologist told him about a medical study for a new drug called Hemlibra that would let him inject clotting agent into his arm or thigh, much like a diabetic takes insulin. He would no longer have to do infusions through a vein.

“Frankly, sticking my vein is a pain in the derriere,” he said.

And instead of giving himself infusions three times a week — “that’s 150 sticks a year” — Stone can give himself a shot once a week with Hemlibra. In the four years that he’s been on Hemlibra, Stone has had just one breakthrough bleed.

“If only I had something like this when I was a kid,” he said. “Children today are not going to have the bleeds and the joint damage that I’ve had. To me, this is the biggest improvement.”

The drug is expensive. His insurance is billed over $1 million a year for Hemlibra. Stone pays about $800 out of pocket.

“I’m lucky to live in this country,” said Stone, who spends his retirement traveling with Cyndi and volunteering with the Public Lands Foundation, the Hemophilia Federation of America and the Virginia Hemophilia Foundation. “I’m lucky to be in the D.C. metro area. I’ve had a fantastic medical team.”

[Brother Randy also thrived. Married and the father of two sons, he became a successful marketing executive and still lives in Connecticut.]

Hemophilia patients living in India, Africa and South Africa, where patients receive little to no treatment, are not so lucky, Stone said. Their lives, most likely short, will be a cycle of painful bleeds and crippling joints.

“You’re probably not doing very good if you don’t live in North America or Western Europe,” Stone said. “You’re going to have the sort of life that I read about in the encyclopedia.”

According to the U.S. Centers for Disease Control and Prevention, hemophilia occurs in approximately 1 in 5,617 live male births. There are between 30,000 and 33,000 males with hemophilia in the United States.

George Stone has Hemophilia A, also called factor VIII (8) deficiency or classic hemophilia. Hemophilia A is a genetic disorder caused by missing or defective factor VIII (FVIII), a clotting protein. Although it is passed down from parents to children, about a third of cases found have no previous family history. More than half of people diagnosed with hemophilia A have the severe form.