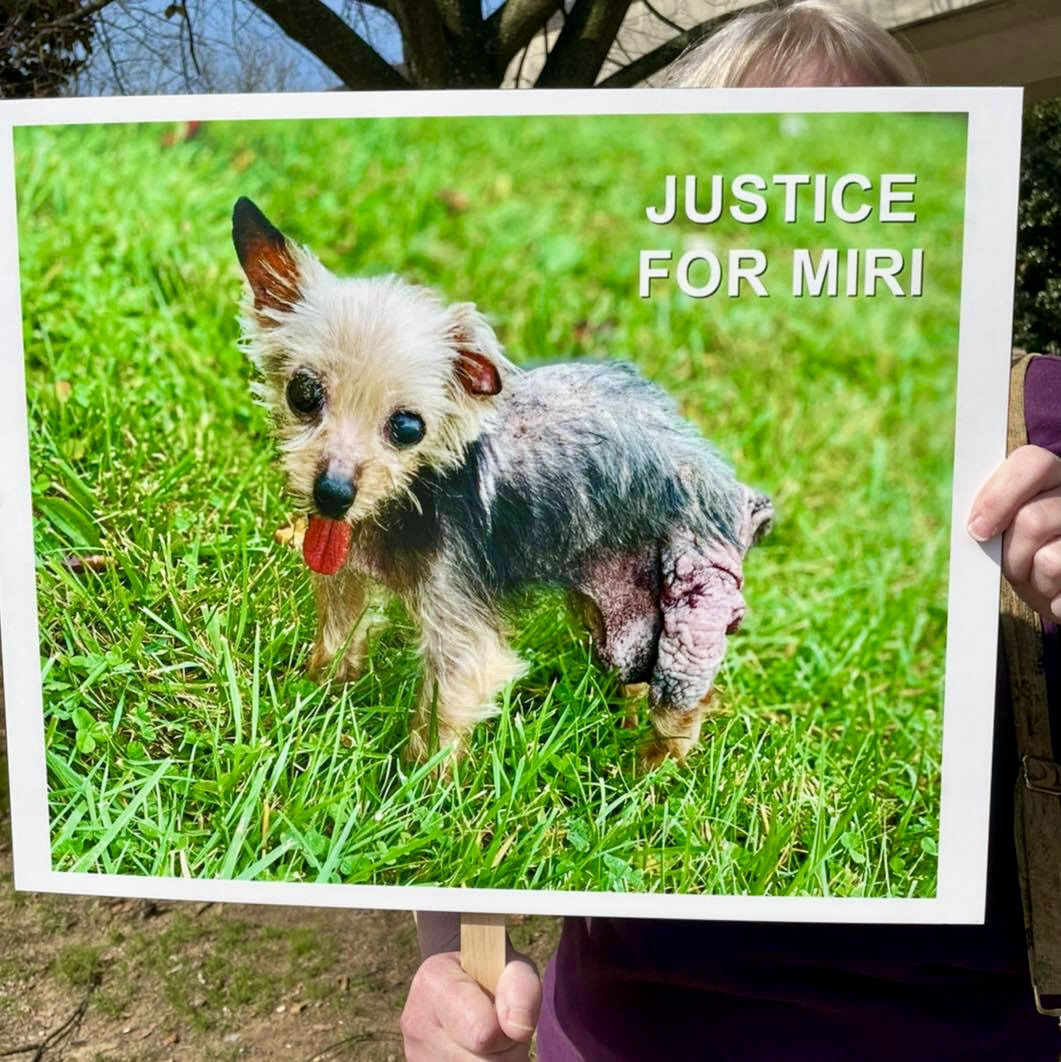 An unidentified woman holds a picket sign depicting Miri, a Yorkshire terrier, on Tuesday morning outside of the Joint Judicial Center in downtown Winchester. Miri's former owners, Gary and Sylvia Helsley, face four criminal charges related to the 11-year-old dog's treatment. They did not appear for their scheduled trial Tuesday in Frederick County General District Court. 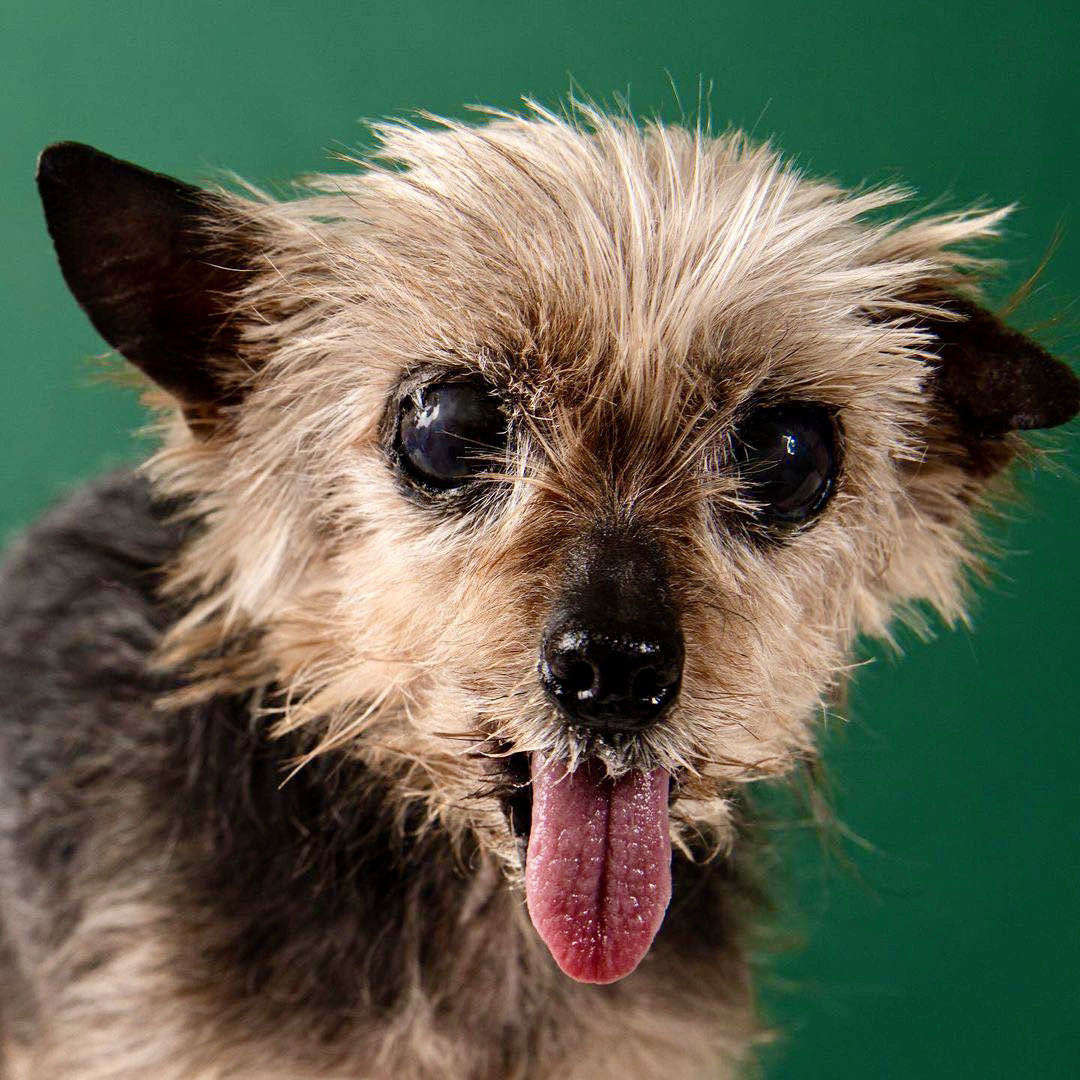 An unidentified woman holds a picket sign depicting Miri, a Yorkshire terrier, on Tuesday morning outside of the Joint Judicial Center in downtown Winchester. Miri's former owners, Gary and Sylvia Helsley, face four criminal charges related to the 11-year-old dog's treatment. They did not appear for their scheduled trial Tuesday in Frederick County General District Court.

This story has been updated to correct the number of people charged in the case.

WINCHESTER — Her name was Miri.

A wisp of a thing, weighing barely 4 pounds soaking wet, this spunky little Yorkshire terrier had deep wellspring eyes that sparkled with trust and melted the hearts of anyone who met her gaze.

Surely this dog was loved by everyone she encountered.

Sadly, that doesn't appear to have been the case. Miri's 11 years of life were reportedly a living hell in which she was forced to breed twice a year, even after the stress on her body became so severe that she could barely stand.

By the time Miri received the medical care she had desperately needed for years, it was too late. She died in January at Gray Face Acres, a nonprofit animal-rescue organization in Prince William County that specializes in caring for older dogs.

The abuse and neglect Miri allegedly endured while in the care of her owners — Gary Wayne Helsley Sr. and his wife, Sylvia Helsley, of the 100 block of Cedar Grove Road in Frederick County — were severe enough to warrant criminal charges. On Oct. 22, the Helsleys were charged with cruelty to animals, failure to have an animal vaccinated and failure to purchase a dog license.

They were supposed to appear for trial Tuesday in Frederick County General District Court, but they didn't show. The Helsleys now face an additional misdemeanor charge of failure to appear and are scheduled to be tried on June 8.

At 4:22 p.m. on Oct. 1, Amber Howard called the Frederick County Sheriff's Office to report she had found a small, flea-ridden dog in a ditch at Crossroads Grocery on Cedar Grove Road near Winchester. Deputy Jesse Suire drove the animal to Valley Veterinary Emergency and Referral Center near Winchester.

Deputy April M. Morris wrote in a criminal complaint that a veterinarian at the animal hospital quickly ascertained that Miri was in alarming condition. She was malnourished, part of her lower jaw and all of her teeth were missing, and she had eye infections, limited vision, muscle wasting and weakness in her hind legs. Miri also suffered from extensive skin and uterine infections, hair loss and an abdominal hernia so severe that her drooping, ulcerated stomach dragged the ground whenever she walked.

Miri spent the night of Oct. 1 at Valley Veterinary, then was transported the next day to the Esther Boyd Animal Shelter in Frederick County.

"The dog's eyes were extremely dry and she was unable to blink her eyes," Morris wrote. "I placed her inside the crate in the back of my animal control vehicle and she collapsed due to being unable to hold herself up or walk."

Miri stayed at the county animal shelter for two weeks, during which time shelter workers started calling her Miracle, or Miri for short. She was then transferred to Gray Face Acres near Manassas.

Georgia Dodson, director of Gray Face Acres' foster and adoption program, did what she could to make Miri happy and comfortable. That included feeding her soft food with a baby spoon because the dog's damaged jaw and missing teeth made it too difficult for her to eat otherwise.

"We got her all the vet care she needed and made her feel as good as she could," Dodson said. "She was a complete mess."

Dodson said the hernia was most likely the result of Miri being bred twice a year for a decade.

Her most recent litter was born in August, but none of the babies survived, Dodson said.

Miri's physical condition ruled out any possibility of her being adopted by another family, so Gray Face Acres became her new home.

Miri basked in Gray Face Acres' love and affection for three months before her frail little body finally gave out and she crossed the Rainbow Bridge on Jan. 2.

"She had a collapsing trachea and a cough that we were trying to manage," Dodson said. "We think it got so severe that she just couldn't breathe."

Dodson shared that information with the Frederick County Sheriff's Office, and Morris paid a visit to Alexander on Oct. 20. According to the deputy's report, Morris learned that Miri's real name was Spring and that Sylvia Helsley had asked Alexander not to post public Facebook comments about the dog's condition.

The next morning, Morris visited the Cedar Grove Road home of Gary and Sylvia Helsley.

"Sylvia advised that she and Gary had owned Spring and she could not afford vet care ... but was aware she just needed to be put down," Morris wrote.

The deputy then learned that Howard, the woman who reportedly found Miri in a ditch, was also the Helsleys' daughter. She and Gary Helsley reportedly came up with the idea of saying Miri was a stray so the Sheriff's Office would cover the cost of having her euthanized.

"Gary explained he and Sylvia did not have the money to have Spring put down, and Spring had been in this condition for approximately two years," Morris wrote. "Gary advised Spring would use the restroom on the steps of their camper because she could not walk down the steps and would drag her rear legs. Gary also advised Spring's skin smelled horrible and he would hear Spring screaming and whining often."

According to Frederick County General District Court records, no charges have been filed against Howard or Alexander. If Gary and Sylvia Helsley are convicted of all four of the misdemeanor charges against them, they each face up to two years behind bars and a maximum fine of $5,500.

Miri's tragic story is coming to light during Prevention of Cruelty to Animals Month, an annual awareness event designed to remind people that responsible pet ownership includes meeting every physical, emotional and medical need of dogs, cats and other companion animals.

Dodson said "a high percentage" of the dogs at Gray Face Acres were rescued from abusive or neglectful owners.

"We've had dogs with broken jaws from being kicked," she said. "We've have dogs come in with all types of medical ailments from long-term neglect. Many of our dogs are on eye drops or ear drops [for infections], or have simply gone blind from lack of care."

Locally, the SPCA of Winchester, Frederick and Clarke Counties reports that only 10% to 20% of the animals it takes in come from abusive or neglectful homes.

"Most animals that come through here were well cared for and well loved," said Lavenda Denney, executive director of the local SPCA.

Sometimes, animals become neglected because their owners have suffered financial setbacks. Denney said the SPCA at 111 Featherbed Lane in Winchester can help in those circumstances with its Pets for Life program, which uses community donations to assist low-income pet owners with expenses such as food or medical care.

Dodson said some people have too much pride or guilt to seek help for a pet they have neglected, but those people need to realize that the longer their animal suffers, the less chance it will have for a long, healthy life.

"If the best thing for your pet is that it go to someone else who can take care of it, then find a rescue or shelter that has the means to do what's needed," Dodson said.

Denney said she takes comfort in knowing that Miri got to experience genuine love and compassion in her final few months.

"In the end, people went above and beyond for this little dog," Denney said. "She probably didn't understand what on earth was happening, why she was getting doted on with special baths and all this wonderful attention, but at least she didn't die in the environment she had been living in. She went surrounded by love and care."

This SOB ought to be hung until he starves to death.

I do not believe you understand how hanging works.

I do agree, he should be punished.

I know exactly how hanging works, I don't need you to tell me. There is a place for a couple like this and it is not Heaven and I hope they burn and burn and burn.