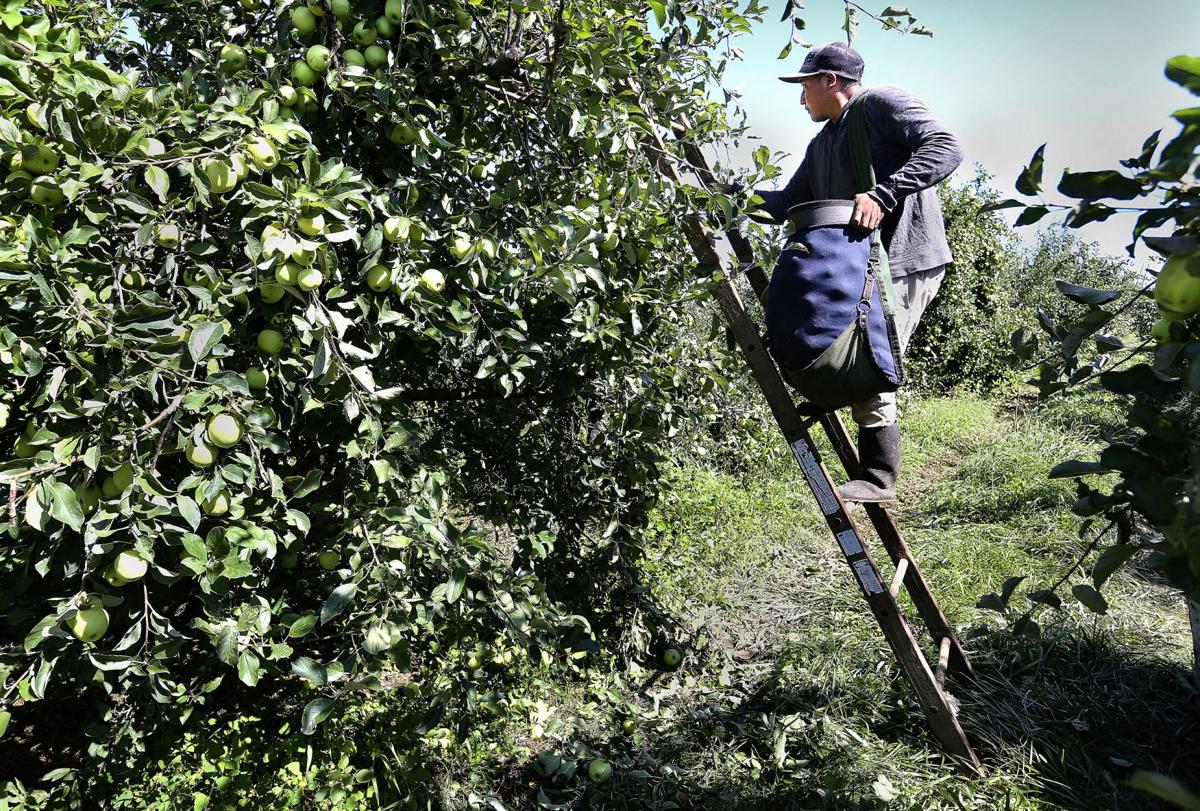 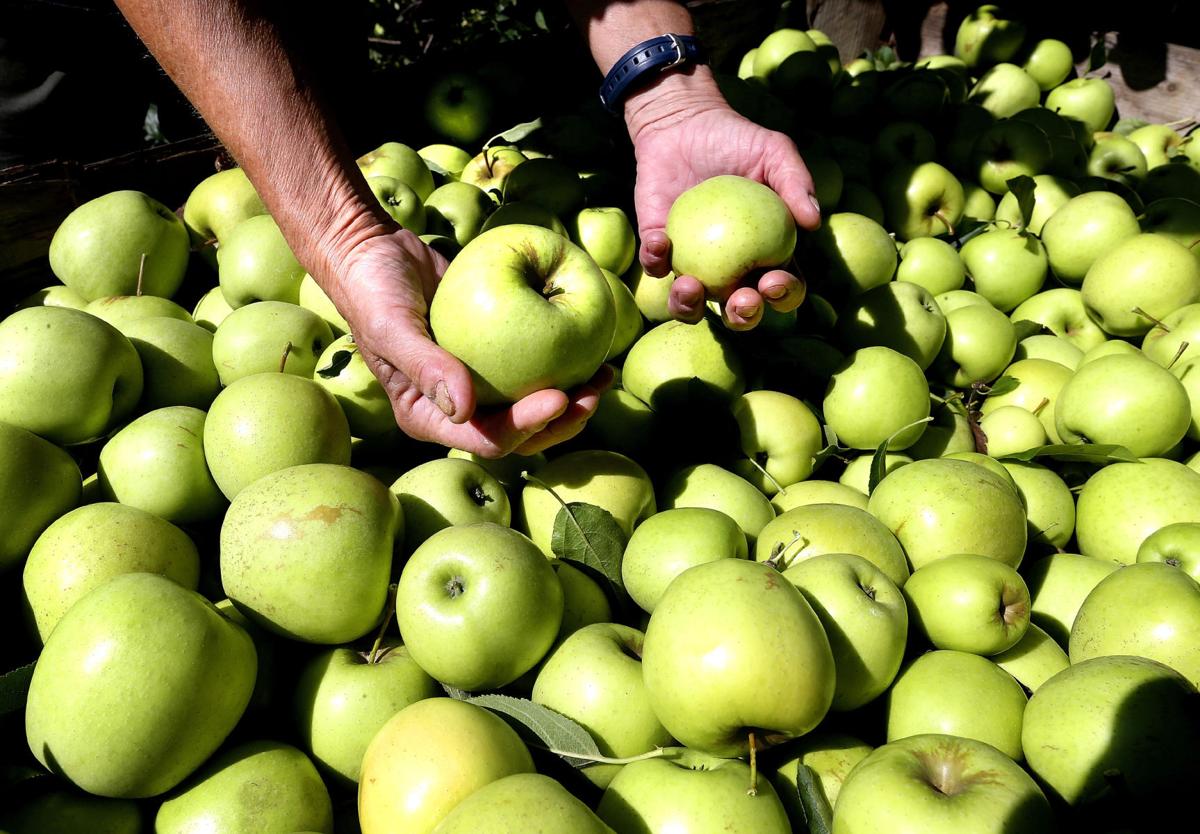 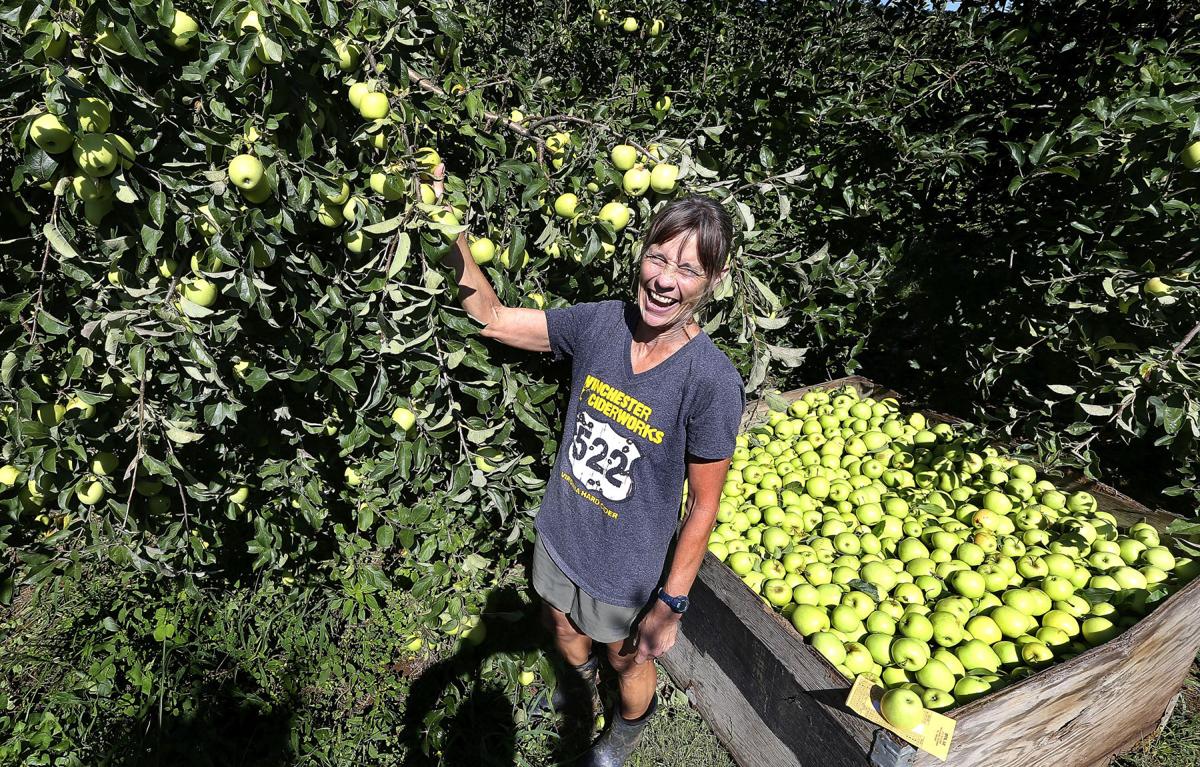 Orchardist Diane Kearns, president of Fruit Hill Orchard, is all smiles with her bumper crop of Golden Delicious apples Thursday.

Orchardist Diane Kearns, president of Fruit Hill Orchard, is all smiles with her bumper crop of Golden Delicious apples Thursday.

WINCHESTER — Despite a hot summer and the ongoing COVID-19 pandemic, local orchardists believe this year’s Apple Harvest is off to a good start.

Marker said the fruit looks “very good” and that his crew has been harvesting for about two weeks. He said last year’s crop was “decent” but anticipates more apples this year. The recent rain may help the apples grow even more throughout the harvest, he added. Some of the most popular apples he sells include Ginger golden, golden, Gala and Honeycrisp.

Diane Kearns, president of Frederick County-based Fruit Hill Orchard Inc., a local apple growing operation with about 700 acres, said the frost from earlier this year ultimately turned out to be a non-issue as there has been a heavy bloom. Because other parts of the country are facing hardships with apple growing, Kearns said more buyers are turning to the northern Shenandoah Valley for apples.

“The good thing is this year’s price is much better than last year’s price,” Kearns said. “And that’s unfortunately on the backs of someone else’s misfortune because North Carolina completely froze out, they have virtually no apples, Michigan is way, way, way down like 15, 20% of the crop. And Michigan is a big processing area. New York and Pennsylvania are more fresh-fruit they’ve got a crop, but there’s not enough processing fruit now. And so now actually, the Michigan buyers are down here, which helps float the boat for us apple growers.”

Kearns said her business lost money last year — within the six-digit range — and she expects this year’s sales to make up for that.

She added that cicadas damaged some smaller trees earlier this year, but not enough to impact the operation significantly.

Kearns said a crew of about 20 workers from Mexico has been picking apples since August. Some days they have picked as many as 4,000 bushels. She hopes to have 225,000 bushels picked by the end of the harvest.

“I think it’s a good crop,” Watt said. “We had a dry July and a very hot August. But all in all we’ve been picking apples for about three weeks, and I think these apples are looking better than I originally thought we would.”

Timber Ridge has over 700 acres and it grows over 30 varieties of Apples.

One of the biggest challenges this year is ensuring the safety of hundreds of workers hired to pick apples amid the coronavirus pandemic. Since August, workers have arrived at a migrant labor camp operated by the Frederick County Fruit Growers Association at 801 Fairmont Ave. The workers stay in one of the camp’s 20 buildings throughout the Harvest, which usually lasts to near the end of October. Many of the workers arrive in crews of about 15.

Camp Manager Joe Robinson said that he expects all workers to arrive by Labor Day. This year, there are about 230 workers, which is down from the between 270-300 who usually worked there before the pandemic. The workforce staying at the camp includes domestic workers and Jamaican and Hispanic workers with H-2A visas.

At the camp, crews are separated into different “pods” where one grower’s team do not interact with other growers’ team. Robinson said the camp is working with the Virginia Health Department in attempts to get all of the workers vaccinated. While the camp will not mandate vaccines, Robinson hopes that about 95% of the workers will get vaccinated. He said the health department has been accommodating.

“If we have somebody who gets sick up here, they come and test them, we isolate them,” Robinson said. “Just like last year. It’s all about the health and safety of the workers.”

Anyone who tests positive for COVID-19 will not be allowed to work and will have to quarantine themselves if they choose to remain at the camp.

Robinson said the workers are not as concerned about COVID-19 this year as they were last year, and he’s been working to convince them the coronavirus is still an issue, even if they are vaccinated.

Kearns said her crew has supported efforts to reduce the spread of the virus and said they were willing to get the vaccine.

“They have not fought me at all about wearing masks; I’m still taking temperatures every morning,” Kearns said. “And the people that didn’t have any vaccines [upon arrival] or ones that needed something else were like, ‘sure, go ahead.’”

Watt said he has about 50 workers from Jamaica and Mexico picking apples. He said that all of his workers are vaccinated for COVID-19.

“We are lucky to have workers,” Watt said. “I feel lucky that these workers are very open-minded to get the COVID vaccination and to have the health department on top of it. They’ve been good to work with.”

Good on the growers and the health department for working together to keep workers healthy. Fresh local apples are a real treat!