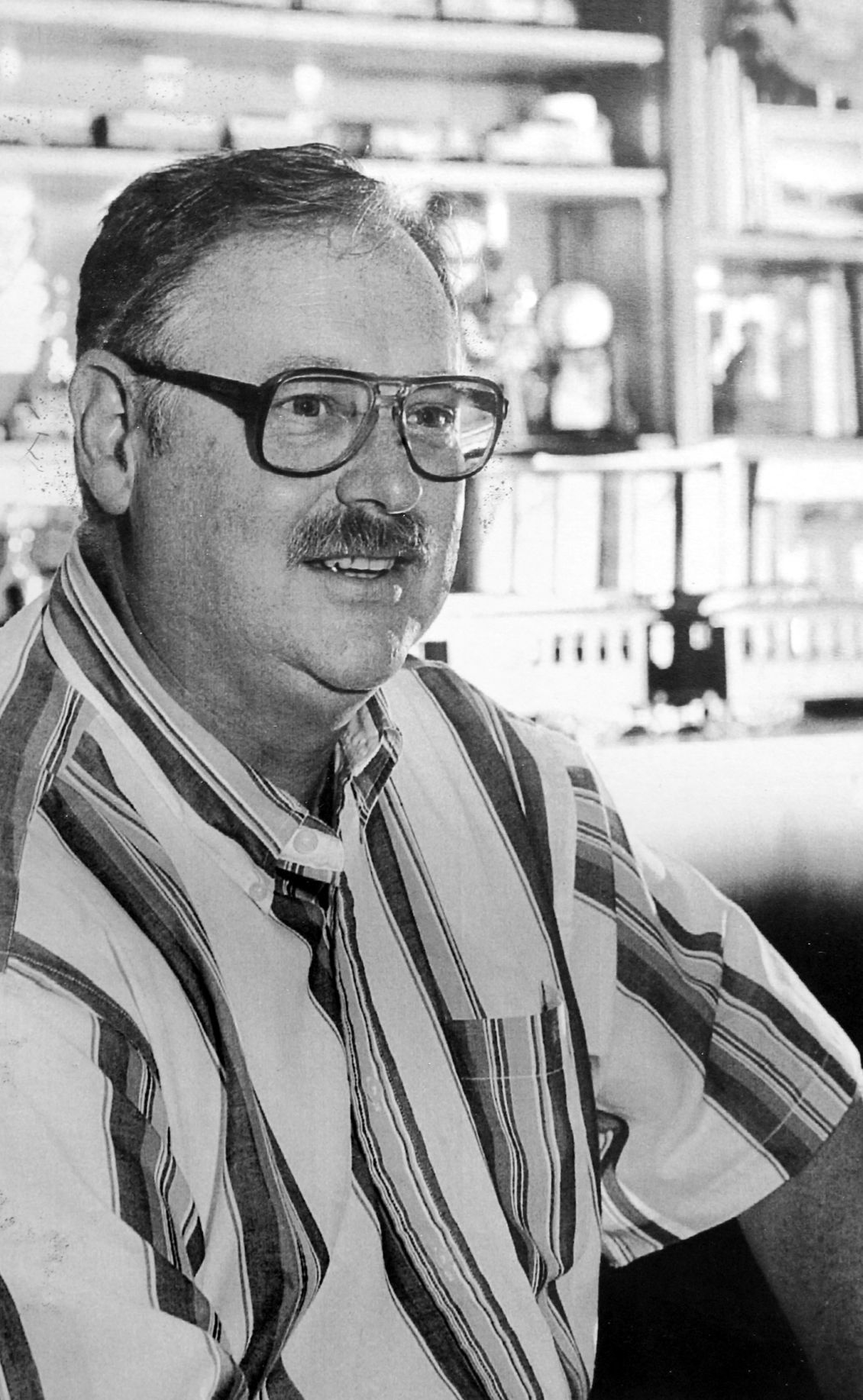 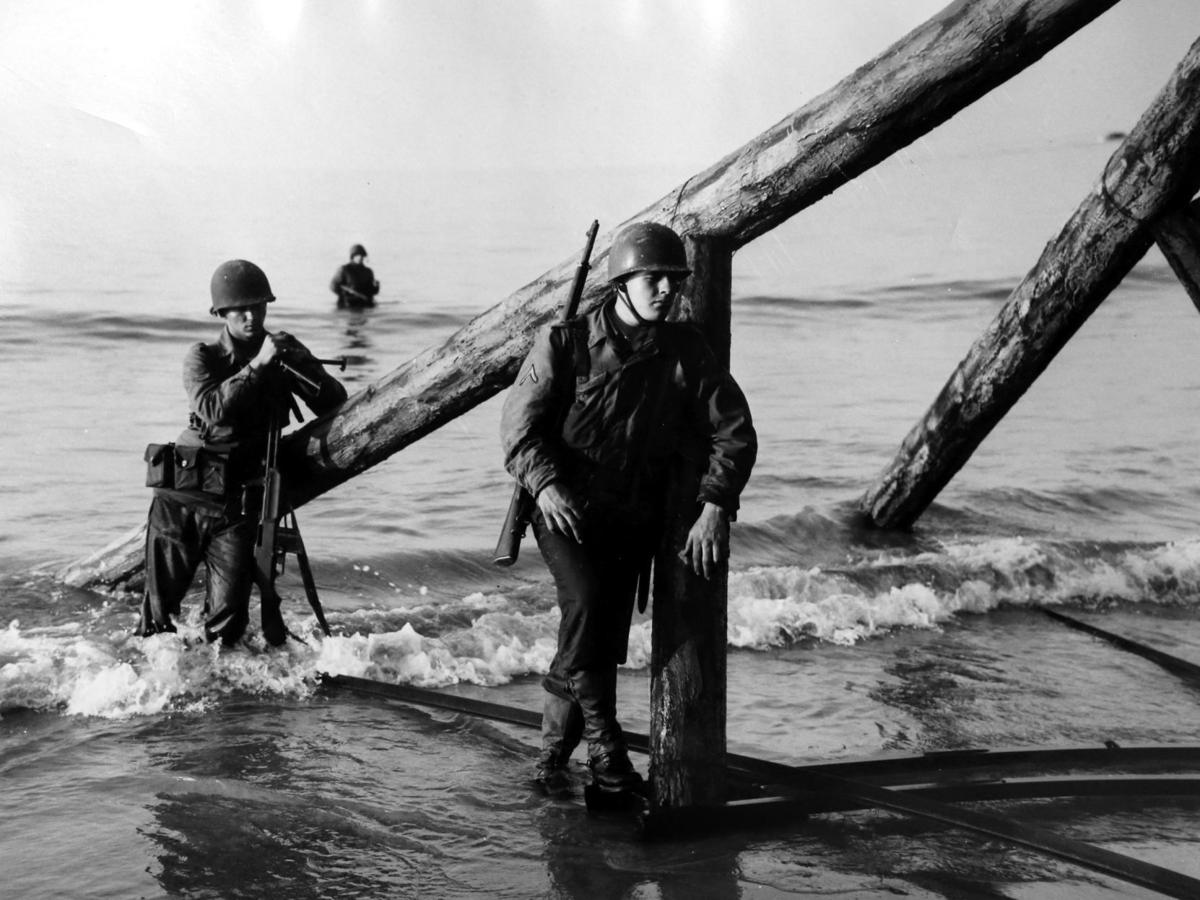 A scene from the 1962 movie "The Longest Day" taken by Winchester resident Larry Sullivan. 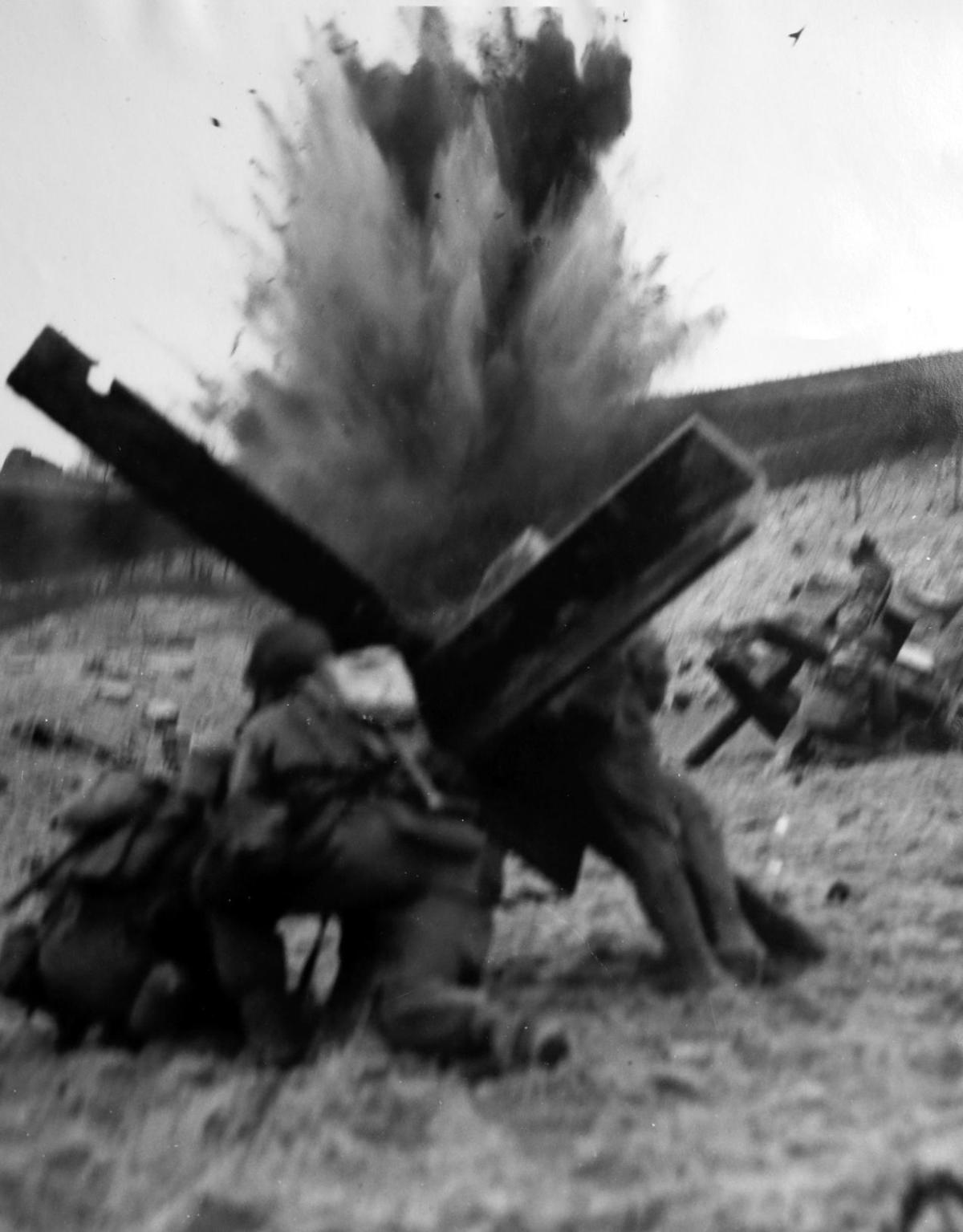 A ovie scene from the 1962 movie "The Longest Day" taken by Winchester resident Larry Sullivan.

A scene from the 1962 movie "The Longest Day" taken by Winchester resident Larry Sullivan.

A ovie scene from the 1962 movie "The Longest Day" taken by Winchester resident Larry Sullivan.

WINCHESTER — If a picture is worth a thousand words, then Larry Sullivan’s life boasts value beyond all measure.

The 77-year-old, well-known for his craft throughout his adopted hometown of Winchester, has been around. He’s been there.

It can be said a person carrying a camera, especially a classic Speed Graphic, and wearing a uniform can go just about anywhere without being questioned.

That was Sullivan, and that was pretty much his heyday a half-century ago when, as a member of the Army’s 532nd Signal Co., he walked on the set of “The Longest Day” and started shooting.

Sullivan’s good fortune — or rather an uncanny ability to be at the right place at the right time with the right camera — continued after his stint in the Army when he came to Winchester to accept a position at The Winchester Star. A hint of what was in store: Future state senator Russ Potts returned home the same week to take over the sports department.

“Looking back, it was like Shangri-La,” Sullivan said in a recent interview. “So much came together. No one planned anything; we just did it.”

For example, Potts, a graduate of the University of Maryland, procured credentials for what proved to be one of the greatest, and most influential, games in NCAA history — Texas Western’s 72-65 upset of Kentucky at Cole Field House in the NCAA finale of 1966. The contest represented the first time an all-black team bested an all-white quintet.

To this day, Sullivan simply leans back and exclaims, “Are you kidding me?”

But he had the camera, the skills, and Potts.

A motion picture is made up of thousands of clips, perhaps only a few of which are shot at one location — no matter how much time a production company sets up shop at that spot. Such was the case with “The Longest Day,” which filmed at a sprawling number of locations — oddly enough very few in Normandy, where D-Day actually transpired.

Halfway down the French coast, though, at La Rochelle on the Bay of Biscay, Sullivan was stationed where the movie was filmed over a matter of weeks.

Sullivan’s talents were at a premium, even though he said his billet was “there by accident.” Before going overseas, he had trained at his hometown Daily News-Record of Harrisonburg under veteran photographer Allen Litten, so he was more than a few steps ahead of the other photographers in the 532nd.

Many days, Sullivan went out in uniform, his trusty Speed Graphic in hand, and shot the same combat scenes many of the professional Hollywood types were taking.

He recalled shooting a bangalore torpedo as it exploded. The photo turned out blurry and, he reminisced, “looks like a combat scene.”

He also had a chance to ogle some of the Hollywood stars whose roles assigned them to La Rochelle — Robert Mitchum (Gen. Norman Cota, for example) and Eddie Albert (Col. Thompson).

Few folks, save Sullivan, realize that the marquee shots for “The Longest Day” are, in fact, his.

When the film was hot property on the theater circuit, Sullivan landed in New York City — only to see his photos staring back at him. “I had given them to someone on the movie set,” he recalled.

Two years later, Sullivan, still in uniform, was in Normandy for the 20th anniversary of the D-Day invasion. Again, fortune smiled on him.

“We met them by accident and interviewed them,” Sullivan said. “(Howard) told us they took (Pegasus Bridge) without a shot. Holding it was tougher.

“Howard also told of a bomb heading right for him, but ended up banging off the bridge.”

Sullivan grew up in Harrisonburg, where his father owned an apartment inhabited by a young woman married to Daily News-Record photographer Allen Litten. The woman introduced Sullivan to Litten — and a photographic career took off.

One of Sullivan’s first jobs was assisting in the summer camp photo routine at Massanetta Springs in Rockingham County. The process involved using a circuit camera capable of taking long shots of camp clients. The photos would be shot on Monday, and then, mid-week, Sullivan, then 16 or 17 years old, would help process the prints and bring them back on Friday to deliver them and collect the money.

Sullivan moved to Winchester when he was 21 to take the job at The Star. Eventually, he moved back to Harrisonburg to assist in a studio operation, which did not prove to his liking from a business standpoint. So he and his wife Cookie, a Winchester girl, returned to Winchester where he opened The Gallery.

Within the decade, Sullivan, who for the last five years has been the administrator at the Winchester Moose, joined and then took over one of the more unique photo businesses extant — the Lemley photo concern in Stephens City. The proprietor, Eldridge Lemley, took most, it not all, of the school pictures in this part of the Valley and had been doing so for years. Before the studio closed, Sullivan assumed this task after Lemley sold the business in 1981.

An odds-on choice for one of the best photos Sullivan ever took came early in his career, in August 1964. Again, serendipity ruled, as Star editor and general manager Jack Davis had just hired him when Anne Douglas Beverley Byrd, wife of U.S. Sen. Harry F. Byrd Sr. of Berryville, died.

Davis asked Sullivan, then 21, to take photos of the funeral, which was taking place at Christ Episcopal Church on Boscawen Street in Winchester. Sullivan set up a darkroom and then walked to the church.

President Lyndon Baines Johnson attended the funeral. The Secret Service informed the photographers that if the president went to Byrd’s car, he would deliver his condolences there. If he walked to his own vehicle, he planned to go to the cemetery.

Byrd came out of the church first, opened his car door, and put his window down. Johnson alighted soon thereafter and was poised to get in his car when he suddenly stopped and walked over to Byrd’s vehicle. Byrd held out his hand, and the president gently kissed it.

And Sullivan got the iconic picture.

Only Davis was not sure that he had, so he enunciated rather firmly, “Did you get the shot?” And then a little louder, “Did you get it right down to the kissed hand?”

Yes, Sullivan had — and, by mid-afternoon, fresh from The Star darkroom, most every afternoon newspaper in the United States had the photo splashed across its front page.

Few folks, save Winchester resident Larry Sullivan, realize that the marquee shots for "The Longest Day" are, in fact, his.

Thank you for creating and sharing this story. The Sullivan family are wonderful people. I went to school with his son, worked with Larry on many occasions, and Larry was my parents wedding photographer back in the 70s. He is loaded with great stories if you ever lucky enough to meet him. Cheers!