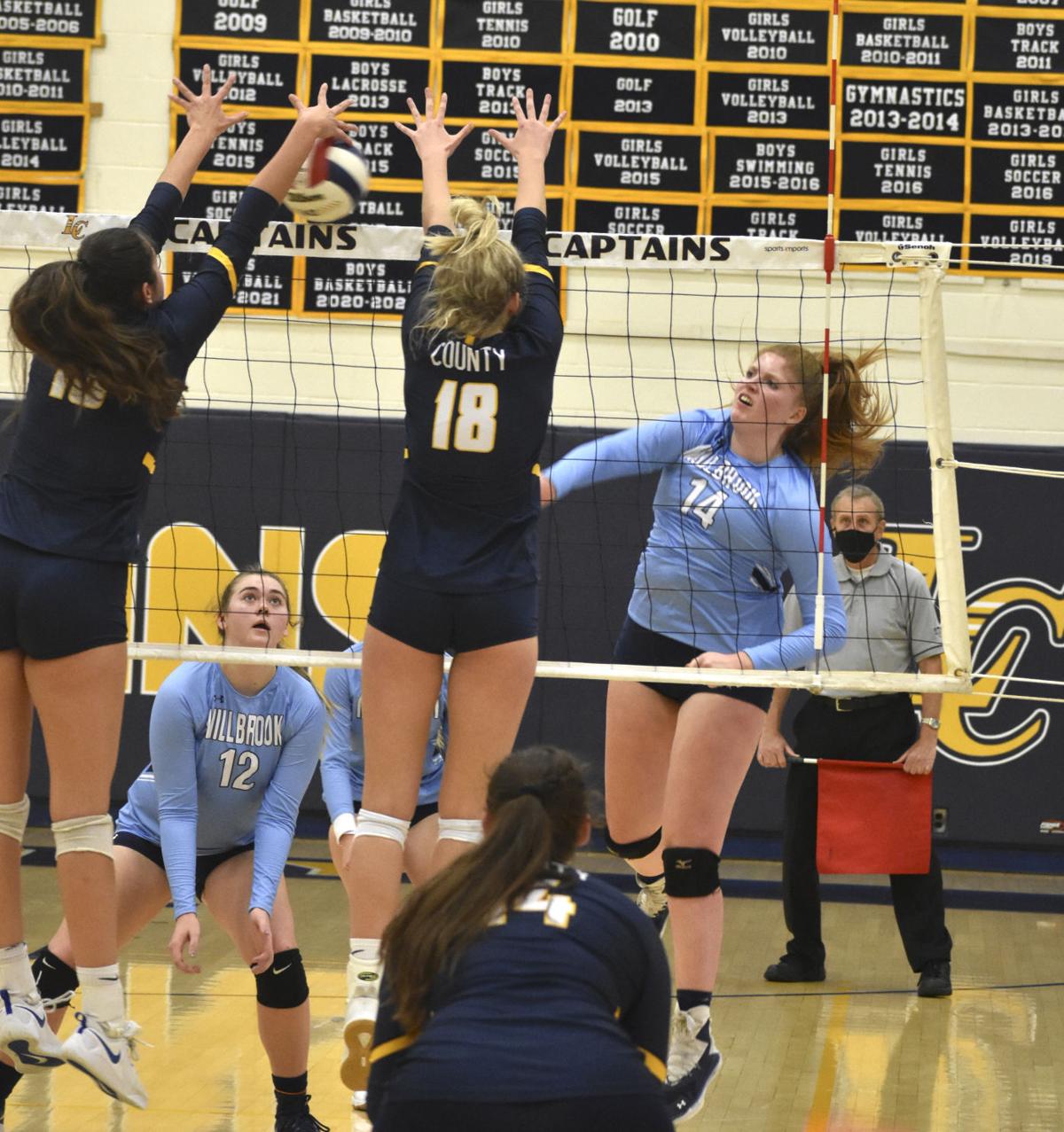 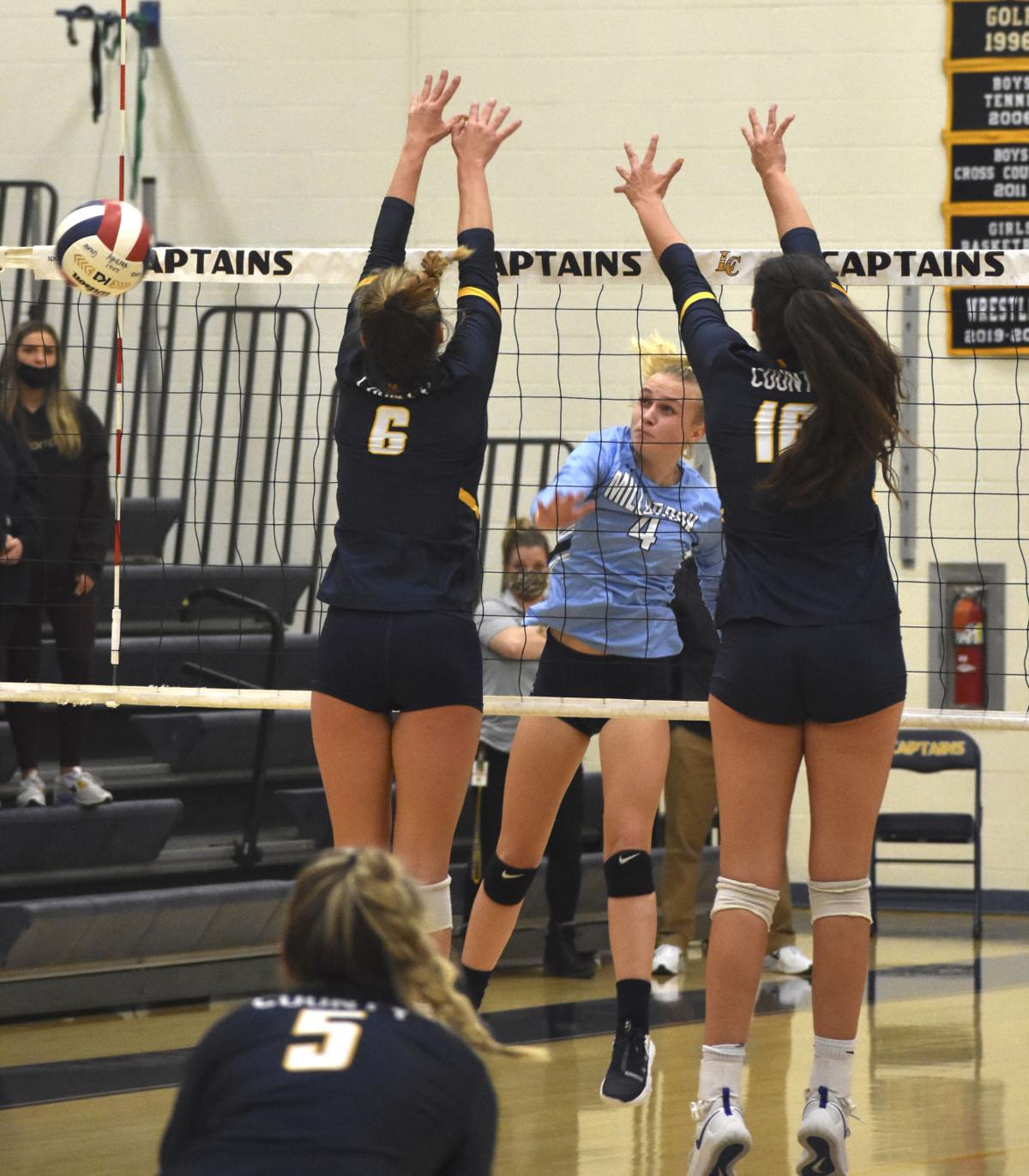 Millbrook’s Ariel Helmick hits the ball down the line in Tuesday’s Class 4 state semifinal at Loudoun County. Helmick had a team-high 12 kills in the Pioneers’ 3-0 loss.

Millbrook’s Ariel Helmick hits the ball down the line in Tuesday’s Class 4 state semifinal at Loudoun County. Helmick had a team-high 12 kills in the Pioneers’ 3-0 loss.

LEESBURG — After a frustrating first two sets, the Millbrook volleyball summoned up one of its patented pushes in the third set.

There was no comeback in store for the Pioneers on Tuesday night, however. Millbrook ran into the program that seemingly always finds a way to push back even harder when it needs to in the postseason.

Nine-time defending state champion Loudoun County ended Millbrook’s season with a 3-0 sweep in the Class 4 state semifinals at Loudoun County High School. After pulling away halfway through each of the first two sets to win 25-13 and 25-18, the Captains (25-2) denied Millbrook’s comeback attempt from a 21-17 deficit in the third to close out the match 26-24.

Sweeps are what Loudoun County does. The Captains have an 18-match winning streak, and 15 of those have ended with 3-0 scores. The Pioneers (23-3) are the only team to take a set off the Captains in their last 10 matches dating back to Oct. 7, doing so in a 3-1 defeat in the Region 4C championship.

Millbrook didn’t have the performance it wanted on Tuesday night, but the Pioneers went out fighting, which was fitting for a team that went 6-0 in five-set matches this year.

“No doubt the effort was there tonight,” Millbrook coach Carla Milton said. “I can’t fault them for that. They gave everything they had all season long and even tonight.

“I know the score doesn’t show it a lot in the first and second sets, but in that third one they were fighting and they never gave up.”

Millbrook senior outside hitter Madelyn White (seven kills, seven digs) thought the Pioneers’ defense was the team’s biggest issue in the first set. The Pioneers had no answer early for outside hitter Delaney Broson (16 kills), who had eight of the Captains’ 16 kills in that set, including three straight to start a 9-0 run that gave Loudoun County a 23-13 lead.

“The blocking really did struggle, and that’s every single person, me included,” White said.

The Captains added 14 more kills in the second set, with Kenly Howerter recording five of her eight kills in a set that ended with two consecutive aces from libero Alayna Johnson.

The Captains went on an 11-2 run to take a 22-13 lead in the second set, though Millbrook did get a brief spark from its defense at the end with three blocks in a 4-0 run to make it 22-17. Madison Koeller (28 assists, four blocks) and senior middle hitter Emily Orndorff each rejected Loudoun County attacks in that spurt.

In the Region 4C final, the Towson commit had a big role on the attack while Hanna Mullen compiled most of the assists. But on Tuesday, Jordan took a commanding role setting up her teammates and occasionally dropping in well-placed shots for kills when she was in a position to set the ball. Jordan had eight kills overall.

“I think [Jordan’s] three rotations at setter, the hitters were effective,” Captains coach John Senchak said. “She had more touches than she usually does. She sets Delaney Broson, our first outside hitter, who was really sharp tonight. Sarah Jordan’s the cornerstone of our team and our go-to player.”

Jordan also had seven service points, including two aces, to help Loudoun County close out the first set on an 11-1 run.

Millbrook — whose biggest lead in the first two sets was 8-5 in the first and 9-6 in the second — picked up its play to start the third set. A kill down the line from senior outside hitter Ariel Helmick — who had six of her team-high 12 kills in the third set — gave the Pioneers a 10-6 lead and prompted Loudoun County to take a timeout.

Millbrook’s lead grew to 12-7 on a Captains attack error. Loudoun County roared back with a 10-1 run for a 17-13 lead. A kill from Madison LaRue after a Millbrook serve return went directly over the net gave Loudoun County a 19-15 lead and prompted the Captains’ student fans to start “Warm up the bus!” chants.

White put an end to that with a kill off a Koeller assist. The teams exchanged points until a 4-0 run from Millbrook that was bookended by kills from Helmick, with the one that made it 21-21 made possible by a stellar dig from senior libero Autumn Stroop (20 digs).

Helmick tied the set at 22-22 with another kill, but Loudoun County won the next two points. A kill by Taylor Weiss (seven kills) and a Captains attack error tied it back up, but a LaRue kill and a Millbrook attack error gave the match to the Captains.

“Credit to Millbrook,” Senchak said. “They did not quit. They kept coming all night. It was a fight.

“A lot of teams when they’re down 2-0 to County and they weren’t really competitive in the first two sets, they kind of lay down in the third. We have nothing but respect for the way Millbrook fought back. That was great.”

“I think we definitely poured our heart out in the last set,” Helmick said.

Though it was a disappointing loss for Millbrook on Thursday, it was a season to remember.

The 23 wins this year are the most any team has achieved at Millbrook under Milton, now in her seventh season. The Pioneers won the Class 4 Northwestern District regular-season and tournament titles for the first time since 2017 and played in the state tournament for just the second time in school history. That 2017 team also lost to Loudoun County in the state semifinals. Millbrook’s only losses were to state finalists (the Pioneers split their season series with Hedgesville, the West Virginia Class AAA runner-up.)

“We played together as a team, and we did what we needed to do this season,” she said.

Helmick said the Pioneers players had a special relationship

“We never wanted to let each other down,” Helmick said. “We always wanted to do the best we could. We just had such a great bond with everyone on the team.”

With six seniors — White, Helmick, Stroop, Orndorff, defensive specialist Victoria McCauley, and injured opposite Amanda Dalton — on its 11-player roster, the Pioneers will look a lot different next year. This year’s group definitely left its mark.

“We went undefeated in the district, we won the tournament, we’re regional runners-up and we’re one of the top four teams in Class 4,” Milton said. ‘There’s a lot to be proud of. I’m just disappointed for them that we’re not going to continue our journey on Friday.”