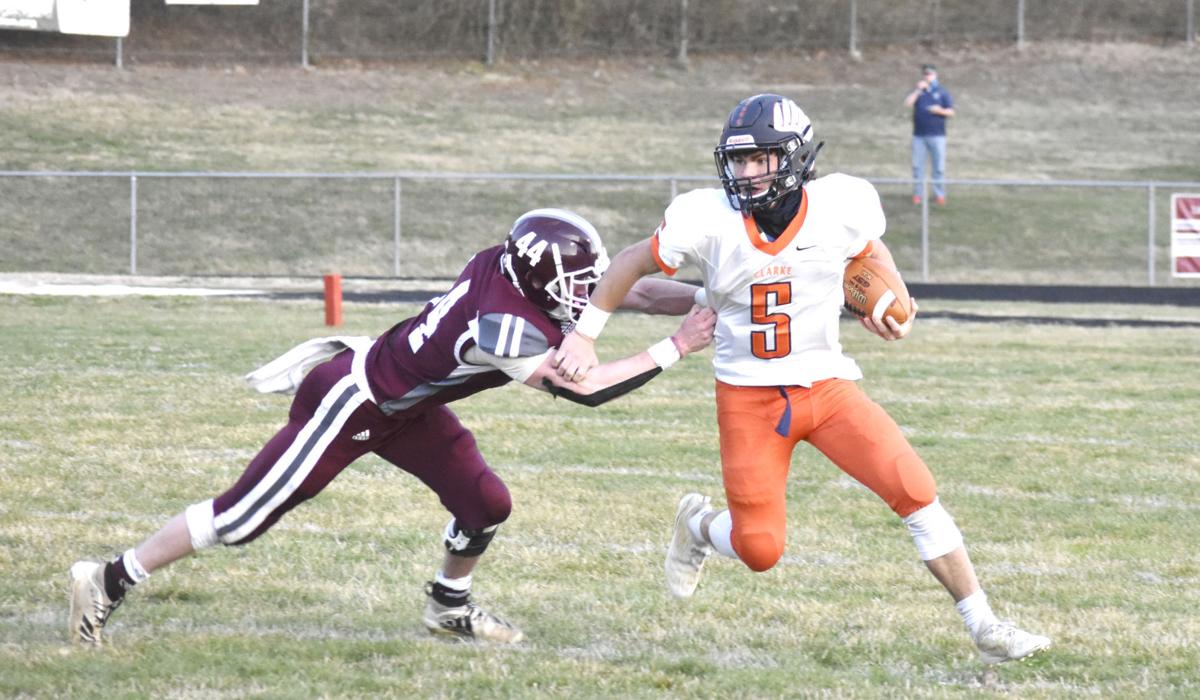 Clarke County quarterback Matthew Sipe (right) was able to brush off Luray’s Brady Jenkins on this play, but the Bulldogs frequently penetrated the backfield in a 36-14 win in Luray on Friday night. Clarke County managed only 179 yards. 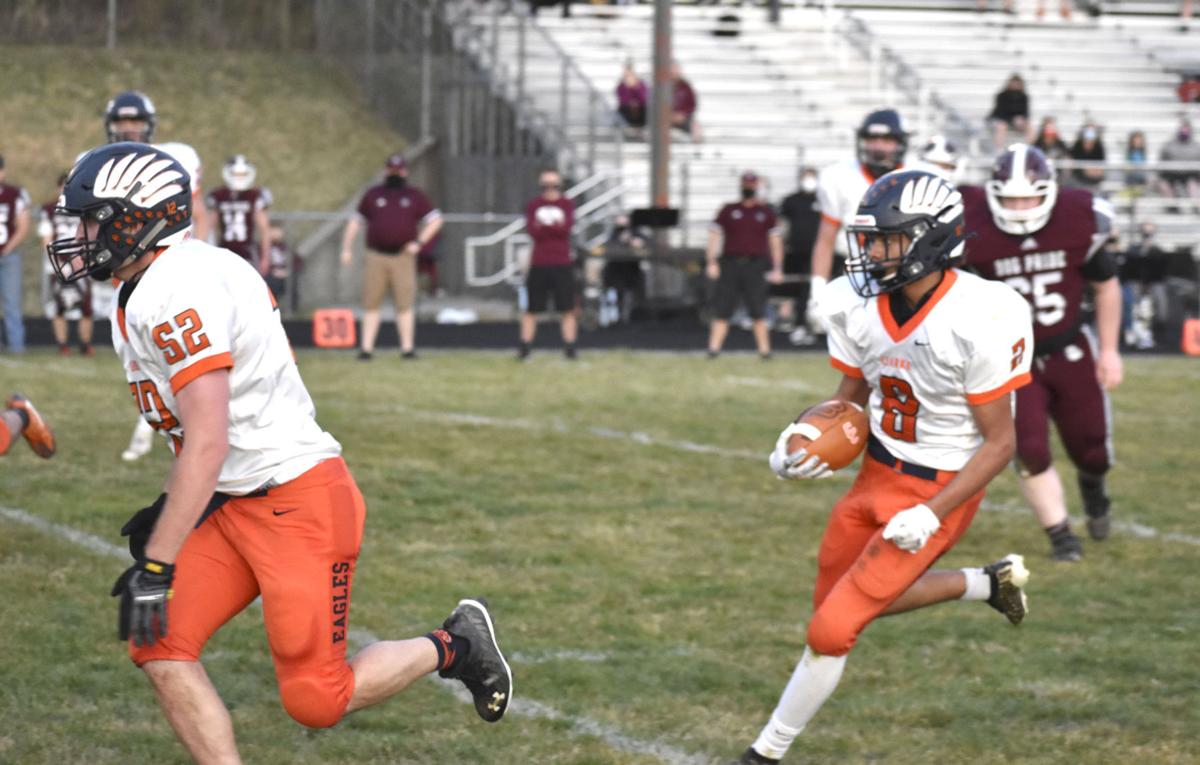 Deonte Trammel (right) follows the blocking of Clarke County offensive lineman Luke Brumback after catching a screen pass from Matthew Sipe. Trammel scored a touchdown from 23 yards out but the Eagles lost 36-14 on Friday night.

Clarke County quarterback Matthew Sipe (right) was able to brush off Luray’s Brady Jenkins on this play, but the Bulldogs frequently penetrated the backfield in a 36-14 win in Luray on Friday night. Clarke County managed only 179 yards.

Deonte Trammel (right) follows the blocking of Clarke County offensive lineman Luke Brumback after catching a screen pass from Matthew Sipe. Trammel scored a touchdown from 23 yards out but the Eagles lost 36-14 on Friday night.

LURAY — Clarke County head coach Casey Childs yelled out "Trap!", but it didn't help — the Luray football team had once again sealed off defenders and created space for the electric Austin Holloway to make use of, and he took full advantage.

Holloway's 47-yard touchdown run on an inside trap play with 7:05 left completed the scoring in the Bulldogs' thorough 36-14 victory over the Eagles on Friday night in Bull Run District action at Bulldog Field.

Luray (3-1, 2-1 district) — which never trailed — had plenty of success with its dead T formation on Friday, particularly with its inside trap plays as it rushed for 328 yards on 52 attempts and gained 398 yards overall against the Eagles (2-1, 1-1).

The Eagles coaching staff pointed out to their players that the Bulldogs were consistently using traps on second down, but Clarke County simply couldn't find much success against Luray's physical blockers and hard charging backs.

That 47-yard touchdown was the last of three in which Holloway went into the end zone virtually untouched, as he opened the second half scoring with a 70-yard touchdown run to make it 24-7, then had a 15-yard TD run with 8:46 left that made it 30-14.

On the flip side, Clarke County's offense only managed 179 yards, making it a frustrating night for an Eagles team that played is first game in three weeks on Friday night. Because of a COVID-19 outbreak, Clarke County had its previous two games canceled and hadn't practiced since March 10.

"Luray played their tails off tonight," Childs said. "They were impressive, especially up front. Holloway's a home-run hitter, and we knew it. He [had success] with the inside trap all night, and we couldn't take it away.

"Offensively, we struggled to block. We really did. We made some pretty good adjustments at halftime offensively [when it was 17-7 Bulldogs], but we were behind and we really couldn't make a stop when we wanted to."

Though he felt everyone gave their best effort, Clarke County senior linebacker and tight end Wynn Morris felt not being able to do any team activities for 11 days took a toll on the team.

"We had good days of practice this week, but there's only so much you can do when you have that much time off," Morris said. "Physically, you lose two weeks of conditioning and two weeks in the weight room. It's tough to come back and then just have four days of practice and then a game, especially one as important as this one."

Clarke County did not come out sharp at all, and as a result the Eagles were forced to play catch-up most of the game.

In the first quarter, the Eagles ran six plays and only one produced positive yardage, resulting in minus-13 yards. Luray scored on its first two possessions for a 10-0 lead, getting a 23-yard field goal by Brendan Fitzwater and a 12-yard TD run by quarterback Dalton Griffith (2 of 4 for 72 yards, eight carries for 32 yards and two TDs).

Clarke County's third possession produced a touchdown, as a 48-yard run by Kyler Darlington (11 carries, 77 yards) on his first touch and a 23-yard screen pass from Matthew Sipe to Deonte Trammel for a touchdown made it 10-7. Trammel received excellent lead blocking from offensive lineman Luke Brumback on the TD.

After forcing a three-and-out, Brandon Hindman returned a punt 38 yards to the Luray 30-yard line. But the Eagles turned it over on downs four plays later with 2:48 left in the half, gaining only two yards on the possession.

Griffith then connected with Brady Jenkins just past midfield after an Eagles defender gambled to try and break up the pass, allowing Jenkins (106 total yards) to run all the way to the Eagle 13 for a 51-yard play. Five plays later, Griffith ran the ball in from two yards out with just 25 seconds left in the first half to send the Bulldogs into halftime with a 17-7 lead.

The Eagles ran 18 plays for 62 yards in the first half. Outside of the two big plays on the TD drive, they had minus-11 yards on the other 16.

Luray controlled the line of scrimmage and also got into the backfield plenty to disrupt running plays and passing plays before they could truly develop. Sipe had just the one completion in his seven attempts.

"We had a great week of practice, we knew what the game plan was, and we knew they were pretty athletic," Sipe said. "But we really couldn't executive any of our plays. They kept getting in our backfield and it was just a rough game. We did as much as possible."

"[Linebacker Kenny Frye] made play after play for them," Childs said. "He was running stuff down."

Down 24-7, the Eagles finally put together a sustained drive when Darlington capped an eight-play, 69-yard march following a fumble recovery with an eight-yard TD run to make it 24-14 with 2:13 left in the third quarter.

But Jaden Couper returned the ensuing kickoff 33 yards to the Luray 43, and 11 plays later Holloway scored from 15 yards out to make it 30-14. The Bulldogs converted a fourth-and-6 with an eight-yard Jenkins run and a third-and-11 with a 19-yard play-action pass from Griffith on the drive.

The next two drives essentially clinched the game for Luray. Sipe was stopped one yard short on a first down at midfield on a fourth-and-12 scramble, then Holloway had his 47-yard TD off a trap play.

"We practiced all week against [inside trap]," Childs said. "We knew the game speed early on would be a factor since we hadn't played in a while. We tried to play more game speed this entire week to get us ready, but when they run the offense they run with the quick trap game inside out of that dead T, it took awhile to get used to, and then we started pressing."

Childs said Darlington's performance was a highlight. He came into Friday as the Eagles' fourth-leading rusher.

"I thought he and Matthew played their tails off on offense," Childs said. "I'm really proud of both of those guys. Kyler's a tough-nosed kid. We ran some wedge play with him, and he ran hard."

Though disappointed by the loss, Childs noted that what the Eagles did at Bulldog Field Friday was a lot more preferable than sitting at home like they did the previous two Fridays.

The Eagles will next play Madison County for the second time, this time in Berryville, on Thursday. Clarke County blew out the 0-5 Mountaineers 58-0 in the season opener, and the Eagles will have to hope another win gets them in the four-team Region 2B playoffs. Clarke County was tied for second in the regional power ratings heading into Friday.

"We're just going to play ball at this point," Childs said. "In this COVID year, we're taking it day-by-day and just trying to get opportunities for the kids."

Also for Clarke County, Dain Booker had 46 yards on 11 carries.