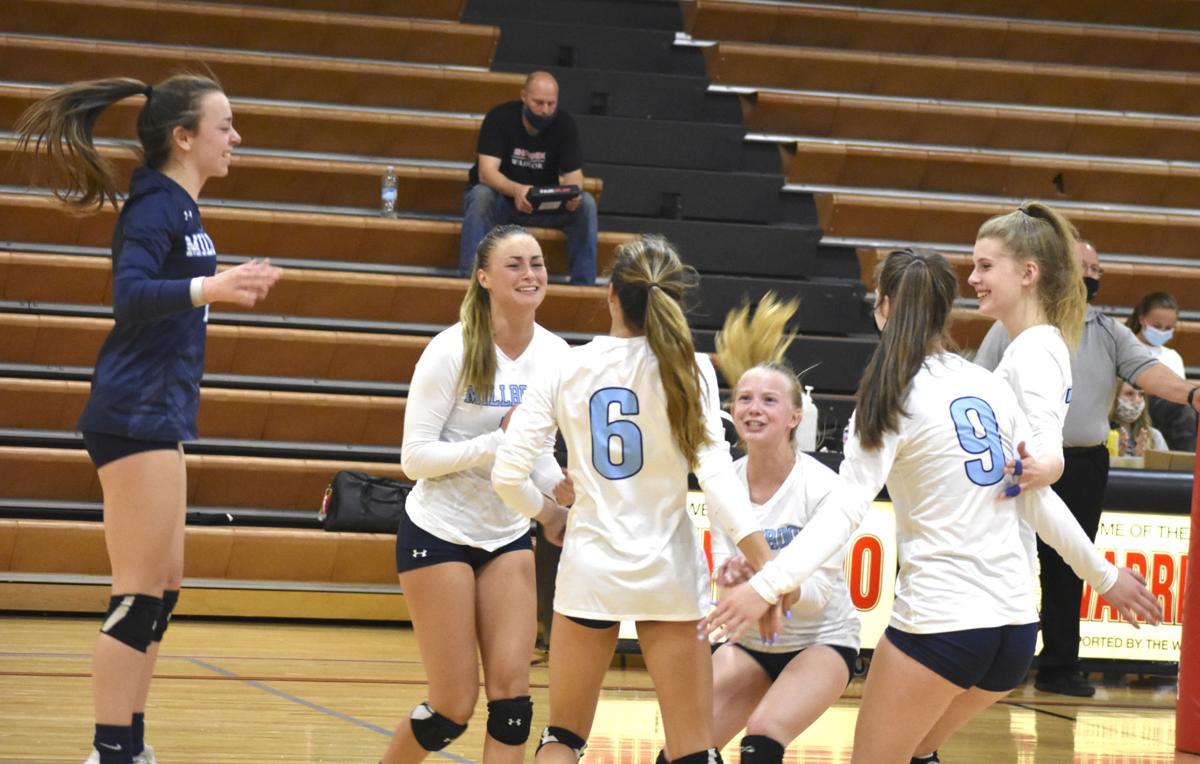 James Wood’s Grace Frigaard serves against Sherando on Thursday at Sherando. The Colonels beat the Warriors 2-0. 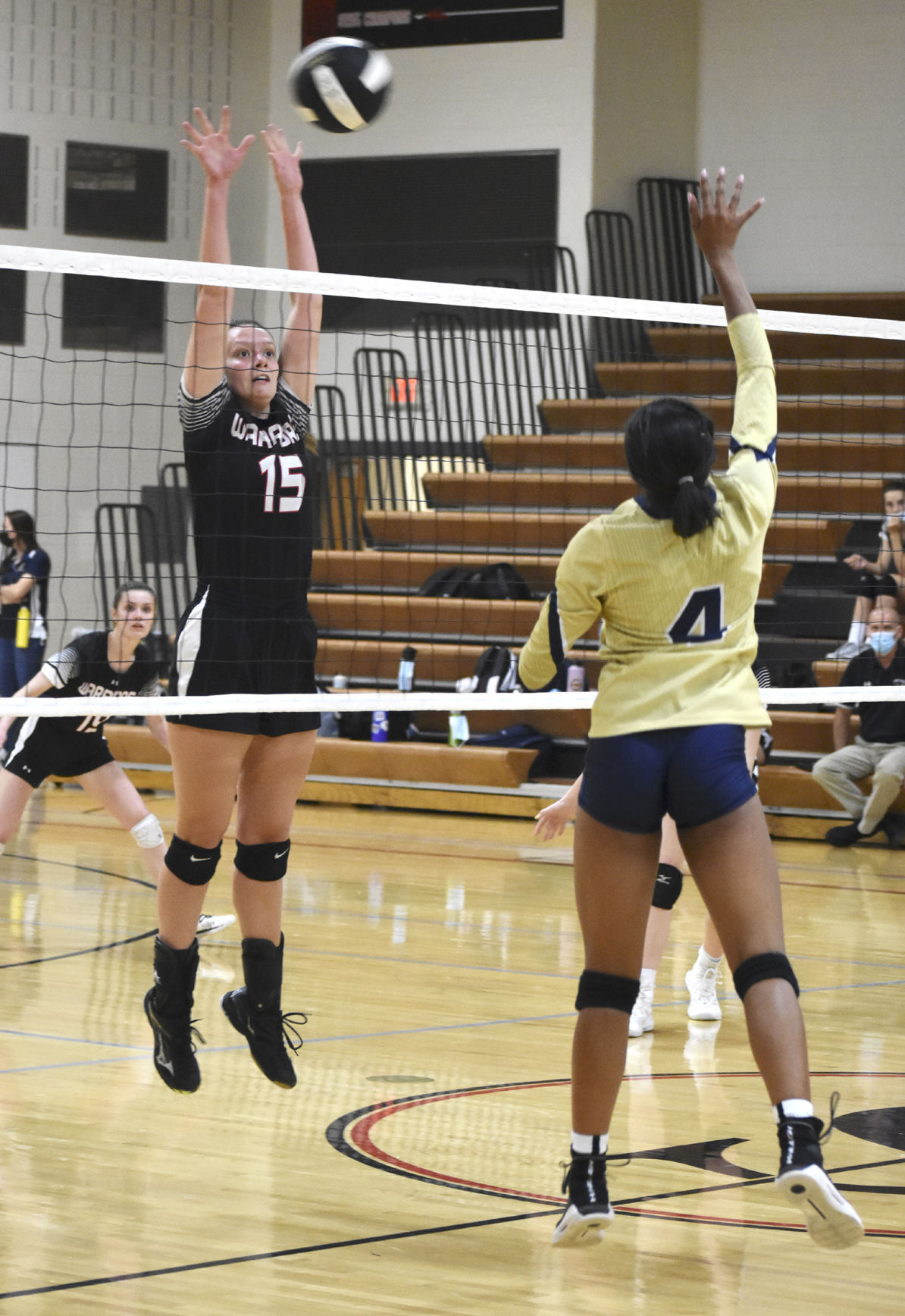 Sherando's Madelyn See (15) jumps up to challenge a shot from James Wood's Alexys Taylor on Tuesday night at Sherando.

James Wood’s Grace Frigaard serves against Sherando on Thursday at Sherando. The Colonels beat the Warriors 2-0.

Sherando's Madelyn See (15) jumps up to challenge a shot from James Wood's Alexys Taylor on Tuesday night at Sherando.

STEPHENS CITY — After play stopped suddenly early in the second set of Tuesday’s last volleyball match, a Sherando parent in the bleachers noticed that Millbrook senior libero Jessica Cleveland was in distress.

A block from Sherando senior middle hitter Madelyn See rocketed off the floor and hit Cleveland, bending one of her fingers and creating pain. As she walked around the floor, she couldn’t get her finger to go back to normal position.

Millbrook coach Carla Milton went over to check on her, but the moment was brief. Cleveland’s face showed she wasn’t comfortable, but she had no intention of coming out of her final high school match.

“I wanted to end this season on a high,” Cleveland said. “The first couple of points after it happened, I couldn’t bend my finger at all. But everyone was lifting me up and saying I could do it, so I just kind of played through the pain.”

Millbrook might not have been playing for a trophy in the Frederick County season, which started a month after the Virginia High School League season due to COVID-19 concerns.

But that moment was just another example of the Pioneers’ teamwork and determination that gave Cleveland and outside hitter Skylar Johnson a senior season that they’ll remember for the rest of their lives.

Millbrook was challenged repeatedly during the three-week Frederick County volleyball season by James Wood and Sherando, and that was the case again on Tuesday. But the Pioneers didn’t give in and completed a perfect 11-0 campaign with a three-set win over the Colonels (22-25, 25-23, 15-10) and a gutsy two-set win over the Warriors (25-19, 27-25).

On Tuesday, a Colonels team that wasn’t cleared to begin playing together until April 12 looked like it might finally beat Millbrook. James Wood senior outside hitter Grace Frigaard had kills on seven of the Colonels’ first 12 points in the second set, and an ace by Caitlyn Kemer made it 18-10 James Wood.

But with Skylar Johnson contributing two aces and a kill and James Wood committing several errors, Millbrook launched a 12-1 run to take a 22-19 lead. Seven points later, Madelyn White took a set from Autumn Stroop and sent a spike down the left side that deflected off two James Wood players before falling to the floor for a kill and a 25-23 second set win.

The third set was a back and forth battle in which the two teams were never separated by more than two points until Millbrook closed it out with a 6-0 run. White had two kills in that run, and when Stroop closed it out with an ace Pioneers players screamed and jumped with joy.

“We just regrouped and got back to basics, and played our game,” Milton said. “When they were hitting, we got blocks up. We played defense and we went all out after the ball. That just turned things around for us.”

Johnson thought Millbrook’s mental toughness and chemistry showed up in a big way. They needed that in the final two sets against James Wood, and the Pioneers needed that against Sherando, too.

Millbrook trailed 14-5 and 18-12 in the second set against Sherando, then went on a 9-1 run for a 21-19 lead. The two teams went back and forth after the Warriors knotted it at 22, with Millbrook finally closing it out at 27-25 on a back row kill from Johnson and a Stroop ace.

“We did a good job of pulling together when we needed to,” Johnson said. “We just never gave up. All three [Frederick County] teams have really good players, but it just came down to the mental game.”

The Pioneers fight for each other. Even though Millbrook’s players haven’t been able to spend any real time together off the court this year due to COVID-19 restrictions, four-year varsity players Cleveland and Johnson think this year’s Millbrook team is closer than any they’ve ever been on.

“We did a good job of bringing each other up,” Johnson said. “We kind of struggled with that in seasons before. We would get down and we wouldn’t be able to get out of a hole.”

Cleveland said “it stung” losing to James Wood in all three matches last year. The Pioneers wanted a chance to play, and to prove themselves.

“After everything that’s been taken away, our senior year, this is kind of what we needed,” Cleveland said.

James Wood’s players were grateful to have a season, as well. The 2019 Class 4 Northwestern District champions just wish they could have gotten one win over their rival.

As big as their lead was Tuesday they were actually closer to beating Millbrook in their previous two matches, losing the third set 16-14 on April 15 and losing the second set 33-31 on Monday after winning the first set.

“We’ve been in control in every game we’ve played against them,” Frigaard said. “We made a lot of mistakes [Tuesday]. It started with our passing. That made it hard to get a set, and we just couldn’t terminate [points].”

“We did come together, we played as a team, and we tried to keep our energy up as long as we could,” James Wood head coach Adrienne Patrick said. “But we were struggling to execute [starting with the middle of the second set]. We had a couple errors [on attacks] from our big hitters.”

James Wood had some clutch moments against Sherando on Tuesday, scoring the last seven points of the first set to win 25-20, then rallying from 21-19 down and surviving three set points in the second set. A Frigaard kill off a Sherando return and a James Wood attack error ended it at 30-28.

But McGuire felt like the Colonels needed to do a better job of staying focused against Millbrook this season.

Given the nature of James Wood’s season, the Colonels felt they came together pretty quickly to have a strong campaign. James Wood only had two practices in seven days together as team, and it played three matches before it held its first team practice.

“All things considered, I think these girls were really resilient considering the situation,” Patrick said.

Eight of James Wood’s 13 players are underclassmen. Becca Lever, Allison Salata and the injured Lainie Putt are the team’s other three seniors besides McGuire and Frigaard.

“It was nowhere near the season that we hoped for, and no postseason definitely puts a damper on things,” McGuire said. “But after the hole that we came out of at the beginning of the season and having no practice before the season, we played very strong, and I think that’s important. With what a new team we are, we did very well at coming together, learning how to use each other, and trusting each other.”

As evidenced by Tuesday’s match scores, Sherando was a much better team this year than its record indicates. The Warriors took three sets off James Wood in five matches, and twice lost 15-13 in the third set. Tuesday was the closest they came to winning a set from Millbrook.

“With the exception of the first match with Millbrook [on April 1], we were very competitive every time we played,” Sherando coach James Minney said. “I was very happy. We only had two seniors. We had a lot of young girls who were playing off and on, and I think only half the team had played together in the past. They played really well, and they played really well tonight. I’m really proud of them. We had a great season. We got everybody in and got them some playing time. It was fun.

“Playing Millbrook and James Wood, I don’t think you can ask for a better schedule. If you only get to play two schools, that’s probably the best you can ask for. You don’t want to play teams that are walkovers.”

See — who makes up Sherando’s senior class along with right side Sabrina Armanca — said the Warriors grew up a lot over the course of the last three weeks.

“We started off really incohesive,” See said. “We were all running around all over the court. But [Monday] and [Tuesday], we played all really well together. We just completely finally meshed at the end of the season.”

The three Frederick County teams could very well have been the top three teams in the Northwestern District, just like last year, if they had a chance to play in the VHSL season.

But they’re happy they got to have a season, especially the seniors. Each coach expressed their appreciation for what their seniors have done for their programs.

“It’s meant a lot [to play for Sherando],” said See, who was referred to by the nickname “Ice Cream” multiple times from Sherando fans, which comes from the father of teammate Saige Garver buying her ice cream on her birthday last year. “I’ve definitely been more of a shy kind of person, and just playing volleyball in general has pushed me out of my comfort zone and made me do things I didn’t think I could do. I feel I’ve grown so much as a person.”

McGuire and Frigaard — part of a James Wood team that made its first state tournament in three years and won its first district title in five years last season — feel James Wood’s program has grown closer over the years, varsity and JV included.

“James Wood volleyball has really made a name for itself, and I think that’s really important, how hard we’ve worked and how far we’ve come in the last four years that we’ve been here,” McGuire said.

“We work very hard to be a good representative of James Wood, and something that James Wood can be proud of,” Frigaard said.

Normally, only state champions end their seasons with a win, so Johnson — a four-year varsity member along with Cleveland — said she enjoyed ending her year with a victory for the first time.

“It was great to see the progression from freshman year to senior year,” Cleveland said. “We started our freshman year going to states, and we ended undefeated.”