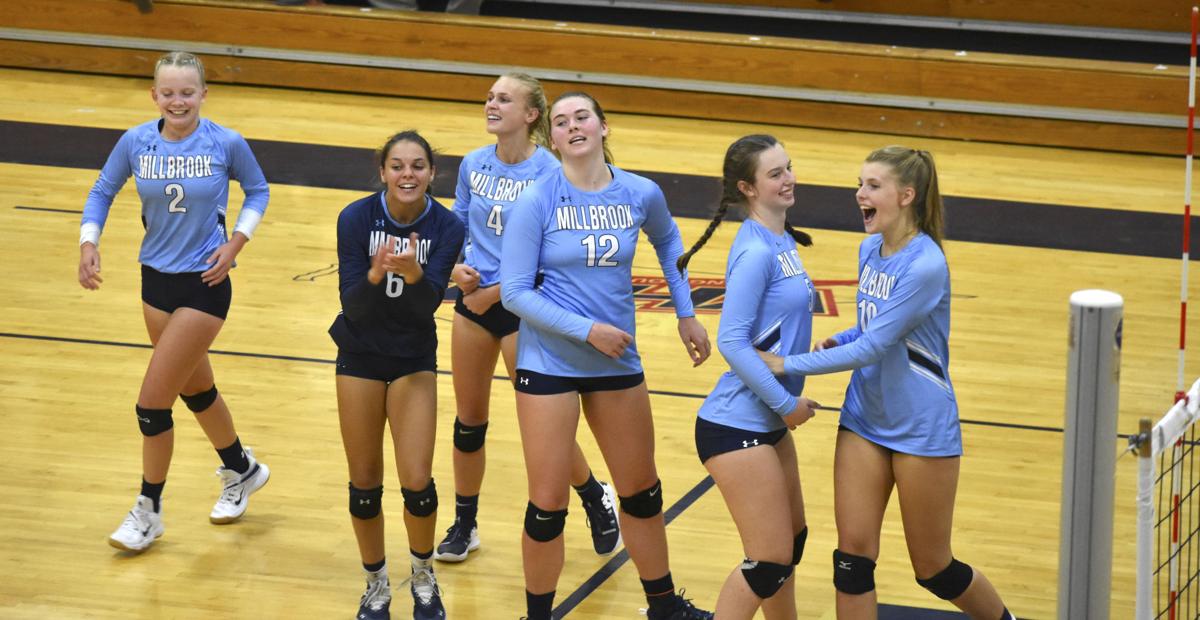 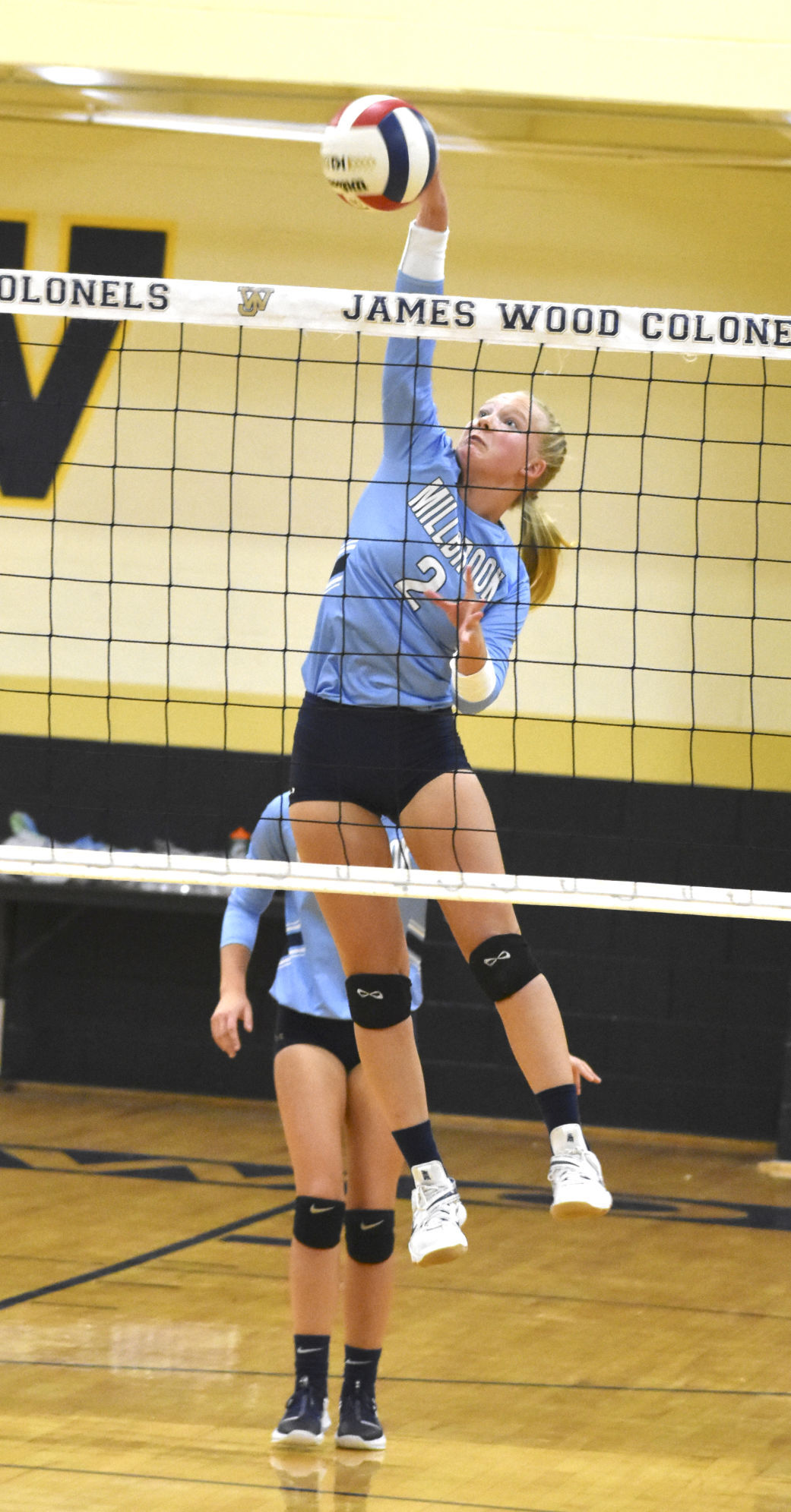 Millbrook senior Madelyn White sends a kill down the line in the first set of the Pioneers’ 3-2 road win over James Wood on Thursday. White had a match-high 15 kills, including one that ended the match. 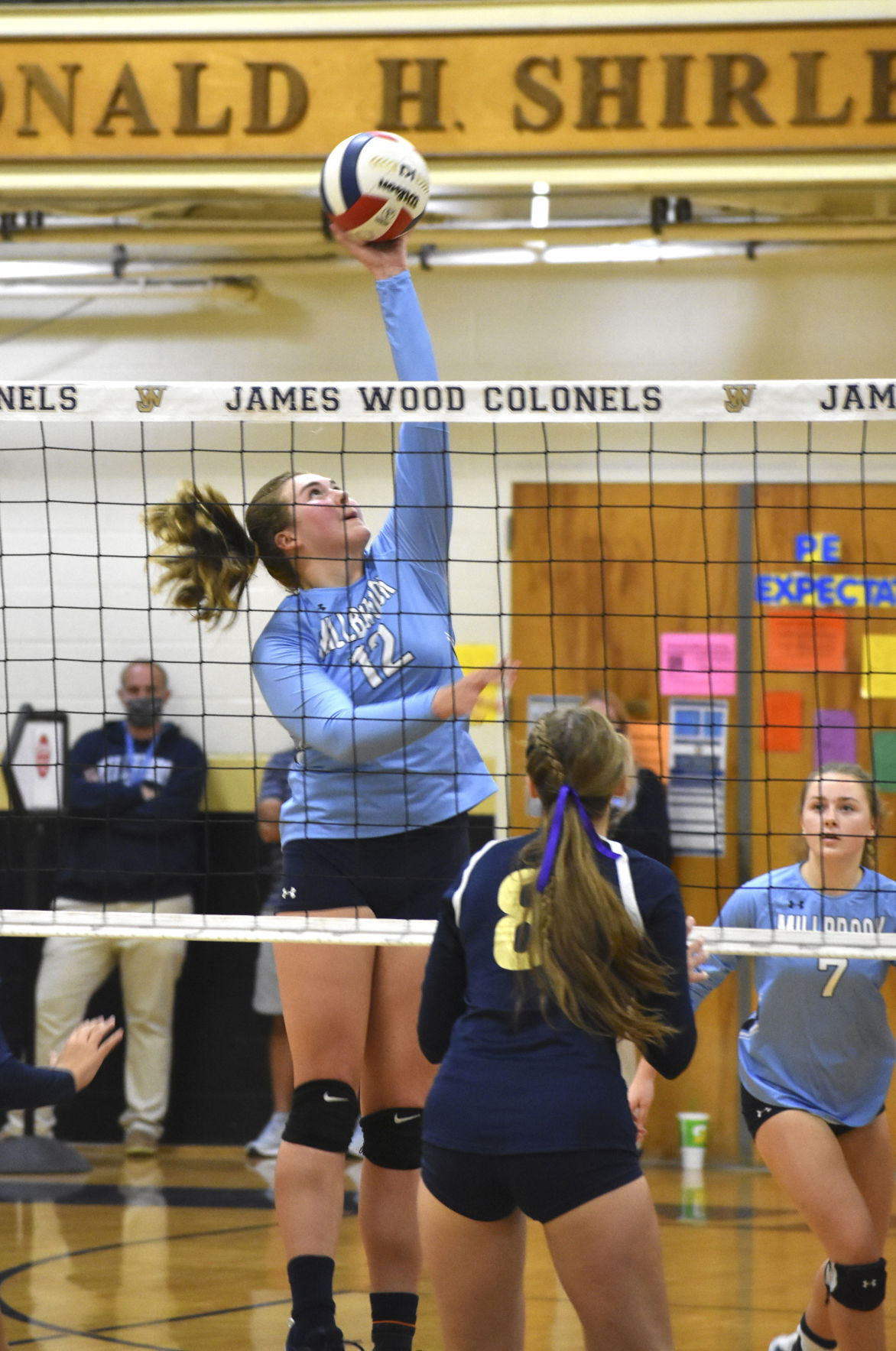 Millbrook's Madison Koeller goes up for a spike in Millbrook's 3-2 win at James Wood on Thursday. Koeller had 36 assists, 10 digs, seven kills and four blocks. 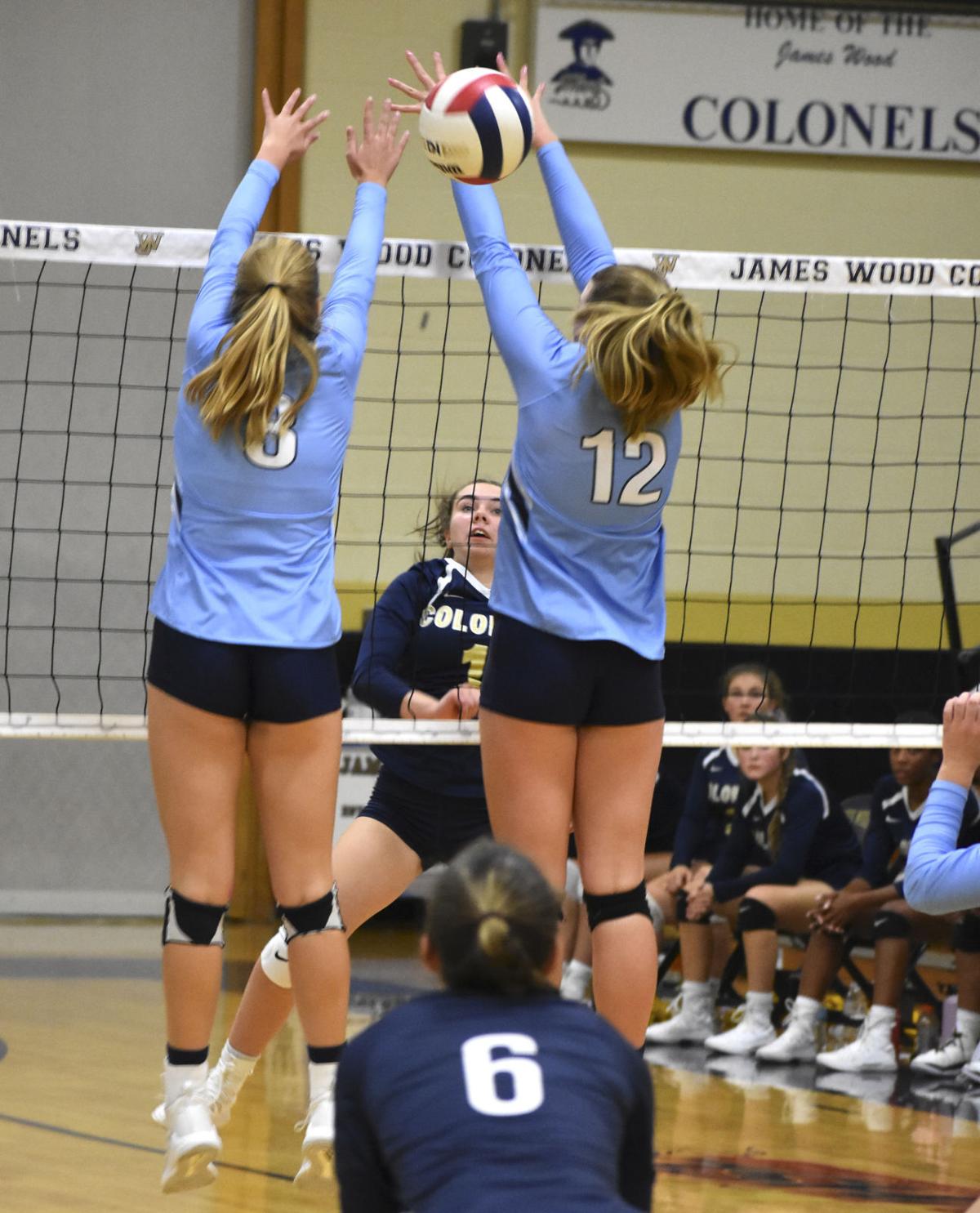 James Wood's Kendall Funk hits between Millbrook's Ashley Roberts (8) and Madison Koeller in the first set of the Pioneers' 3-2 win at James Wood on Thursday.

Millbrook senior Madelyn White sends a kill down the line in the first set of the Pioneers’ 3-2 road win over James Wood on Thursday. White had a match-high 15 kills, including one that ended the match.

Millbrook's Madison Koeller goes up for a spike in Millbrook's 3-2 win at James Wood on Thursday. Koeller had 36 assists, 10 digs, seven kills and four blocks.

James Wood's Kendall Funk hits between Millbrook's Ashley Roberts (8) and Madison Koeller in the first set of the Pioneers' 3-2 win at James Wood on Thursday.

WINCHESTER — With the score tied 7-7 in the fourth set, Thursday’s volleyball match at James Wood High School was interrupted for several minutes to stop the bleeding on the finger of the Colonels’ Ella Kelchner and to clean up the Shirley Gymnasium Court.

Less than 15 minutes later, Millbrook was discussing how to figuratively stop its own bleeding.

When play resumed after the delay, James Wood scored 18 of the next 22 points as part of an overall 19-4 run to win the set 25-11 and knot the match at two sets apiece.

Millbrook was about to play its second fifth set of the year, but the previous one, a victory against Sherando, was a different situation. The Pioneers were at home and were rolling with third- and fourth-set wins. The fourth set on Thursday was their most lopsided set loss of the year, and they committed seven attack errors in James Wood’s 19-4 run.

But as Millbrook coach Carla Milton said after the Sherando win, the Pioneers have a never-quit attitude. When it was all over on Thursday, they went home as the only remaining unbeaten in district play in the seven-team Class 4 Northwestern.

James Wood scored the first point of the fifth set on a kill by senior Katey Matthews (eight kills, five aces), but the Pioneers scored the next four points to take a lead they would not relinquish. The Colonels got at close as 13-12 and 14-13 but were never able to pull even.

White (team-high 15 kills, 12 digs) didn’t have a single kill in the fourth set, but her back-to-back kills to make it 3-1 in the fifth indicated that the Pioneers had put the fourth set behind them and were back in their comfort zone.

“That’s all we needed, was being able to start over,” White said. “Every single person had that ‘We’re going to do this’ mentality. There was not a single person who was doubting us. I think a lot comes from our setter. She really gets us going and she controls our flow pretty nice.”

Area assists leader Madison Koeller, a junior, had another outstanding performance setting up her teammates (36 assists) in addition to once again providing stellar all-around play, as she added 10 digs, seven kills and four blocks.

It truly was a team effort for the Pioneers, as evidenced by one key defensive sequence in the fifth set.

With the score 6-3, senior libero Autumn Stroop (38 digs) slid along the floor toward the left sideline to dig up a James Wood spike. With Stroop still sliding, senior outside hitter Ariel Helmick (seven kills) hurdled over Stroop and bumped the ball back over her head to the center of the court. The rally eventually ended with a White kill that had the Millbrook fans roaring and prompted James Wood coach Adrienne Patrick to take a timeout.

Stroop said the Pioneers play better when they play loose. That point was an example of that, and showed teamwork.

“[After the fourth set], we talked about playing for each other and playing your position,” Stroop said.

James Wood was down, but it did not back down. Izzy Turner (seven kills) sent the Colonels fans into a frenzy with a rocket of a spike that made it 11-7, though she had to leave the match with a leg injury after that shot.

Addie Pitcock came in to replace her, and four points later she started enthusiastic “SHE’S A FRESHMAN” chants with a kill of her own to make it 13-9. Pitcock then went to the service line and recorded three straight service points, with sophomore middle hitter Lexi Taylor (eight blocks, four aces) contributing to two blocks on back-to-back points to make it 13-12.

A James Wood serve that went long made it 14-12, but another block from Taylor — who Patrick said injured her wrist at one point in the fifth set — made it 14-13.

But Millbrook finished things out when Stroop passed to Koeller, who then set a ball to her left that the 5-foot-6 White fired down the middle. The Colonels barely got a touch on the ball on a dig attempt before it hit the ground, and the Millbrook players jumped and clapped in celebration.

“We were really prepared,” White said. “We knew it was going be loud in here, and we just played through it.

“We’re all juniors and seniors, and we’re really close and we just really play for each other. We each want each other to make that big play. There’s no person who wants to be the star. We all just play together.”

Milton was certainly pleased to see her team dig deep in a hard-fought match.

“Momentum was going back and forth,” Milton said. “When we needed it, we kept ourselves together and did what we needed to do.

Patrick said she hoped James Wood’s performance from the fourth set would carry over to the fifth. The Colonels definitely picked up their play after Kelchner’s injury, which Patrick said came as a result of slamming her hand into teammate Melia Burch’s leg. Kelchner (six kills) was able to stay in the match after the delay.

“In the fourth set, we played really well as a team,” Patrick said. “We kept high energy, we wanted to get every ball up.”

Patrick said it was tough to see Turner go out, because she liked the cohesiveness that was on display from the six players on the court at that time. But she gave credit to Pitcock for her performance in the fifth set and to Taylor for contributing to a strong James Wood defense at the net despite her wrist injury.

“One thing we’ve been slowly progressing on is our blockers getting together and getting lots of touches on the ball,” Patrick said. “Lexi, I think she touched almost every ball she attempted to block. She was really getting up there. She was wincing in pain every time she touched the ball and had tears in her eyes [late in the fifth set].”

Overall, Patrick liked the effort from her players.

“I’m proud a lot of what they did,” Patrick said. “Digging the ball up. Making sure that we’re covering our hitters. Trying to keep swinging hard and aggressively. Putting the block up. Getting good touches on the ball. There’s so many good things that we did.”

Taylor was proud of the team’s effort as well.

“I think we all worked as a team,” Taylor said. “We fought as much as we could and we tried our best.”

James Wood fought hard because it wanted to defeat its biggest rival, and also because the Colonels were playing for former James Wood student Kassi Culp.

Thursday marked the one-year anniversary of Culp’s death. The cheerleader would have been a senior this year and fans wore purple to honor her. Taylor noted that Culp’s favorite color was purple.

Patrick, a social studies teacher who wore purple pants on Thursday, taught Culp as a freshman. Patrick said it meant a lot to see so many people in the stands wearing purple. Patrick said Culp’s mother and sister were two of them.

“We try to stay together as a family,” Patrick said. “I’m constantly telling my team to stick together and work together. [Culp] was part of our student body and would have been in the Loud Crowd. So [the support for Culp from the crowd] meant something.”