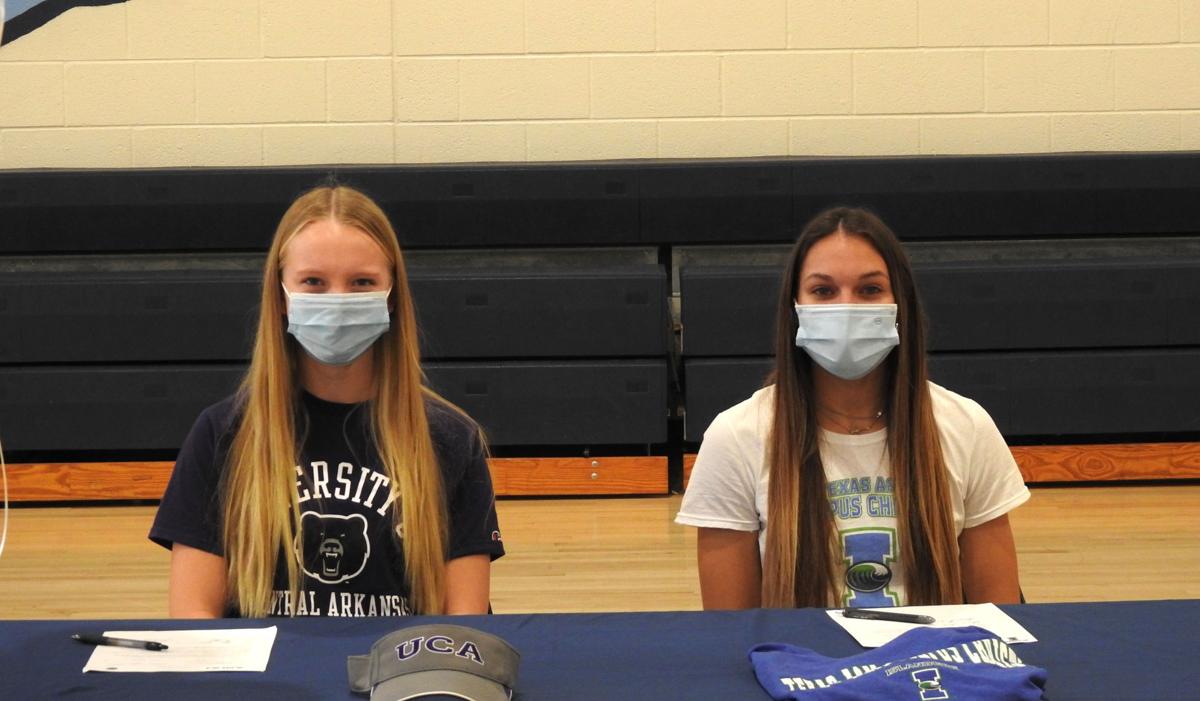 Millbrook’s Madelyn White (left) and Autumn Stroop each signed to compete with NCAA Division I beach volleyball programs during a cereomony at Millbrook on Wednesday. White is headed to Central Arkansas and Stroop is going to Texas A&M-Corpus Christi. 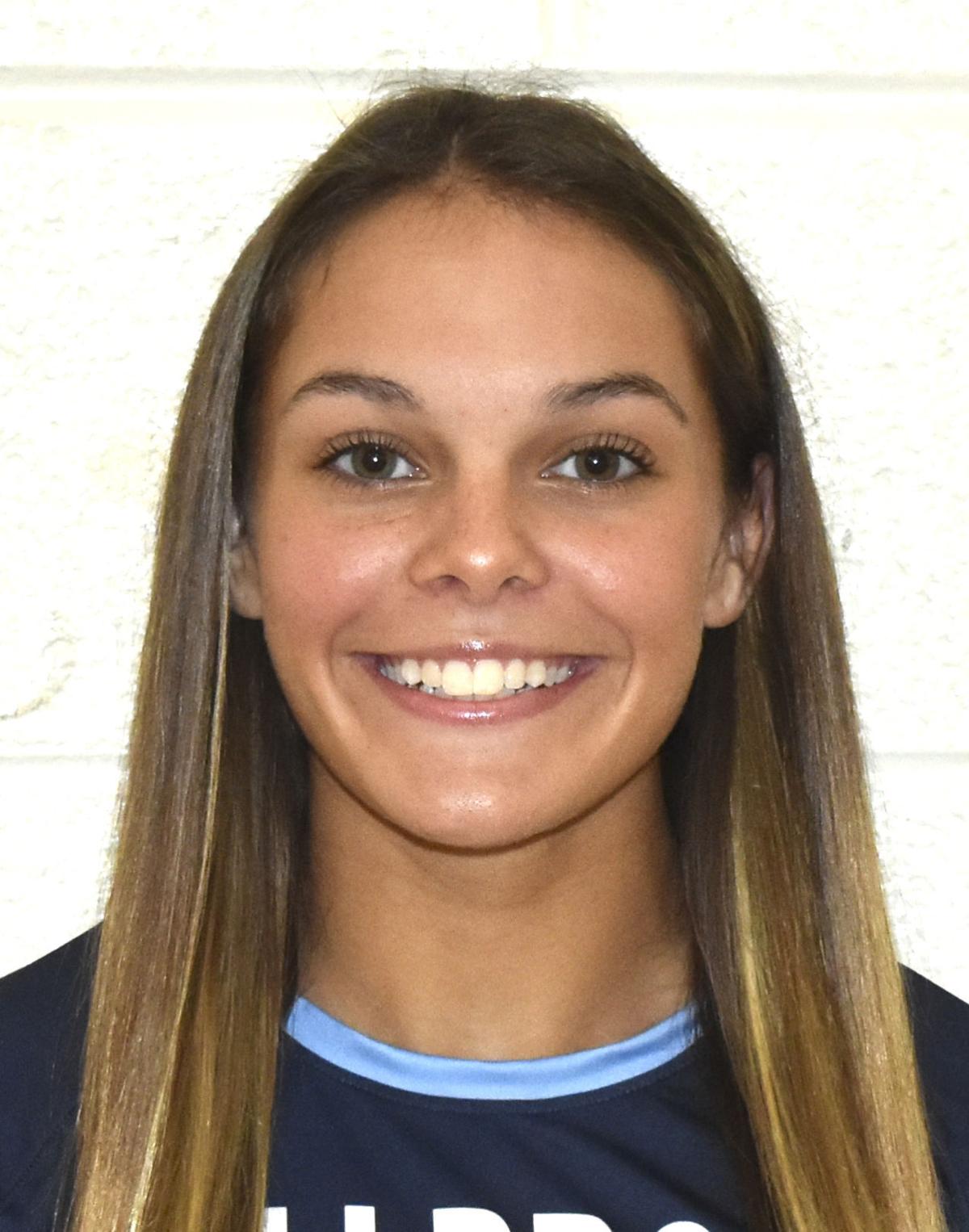 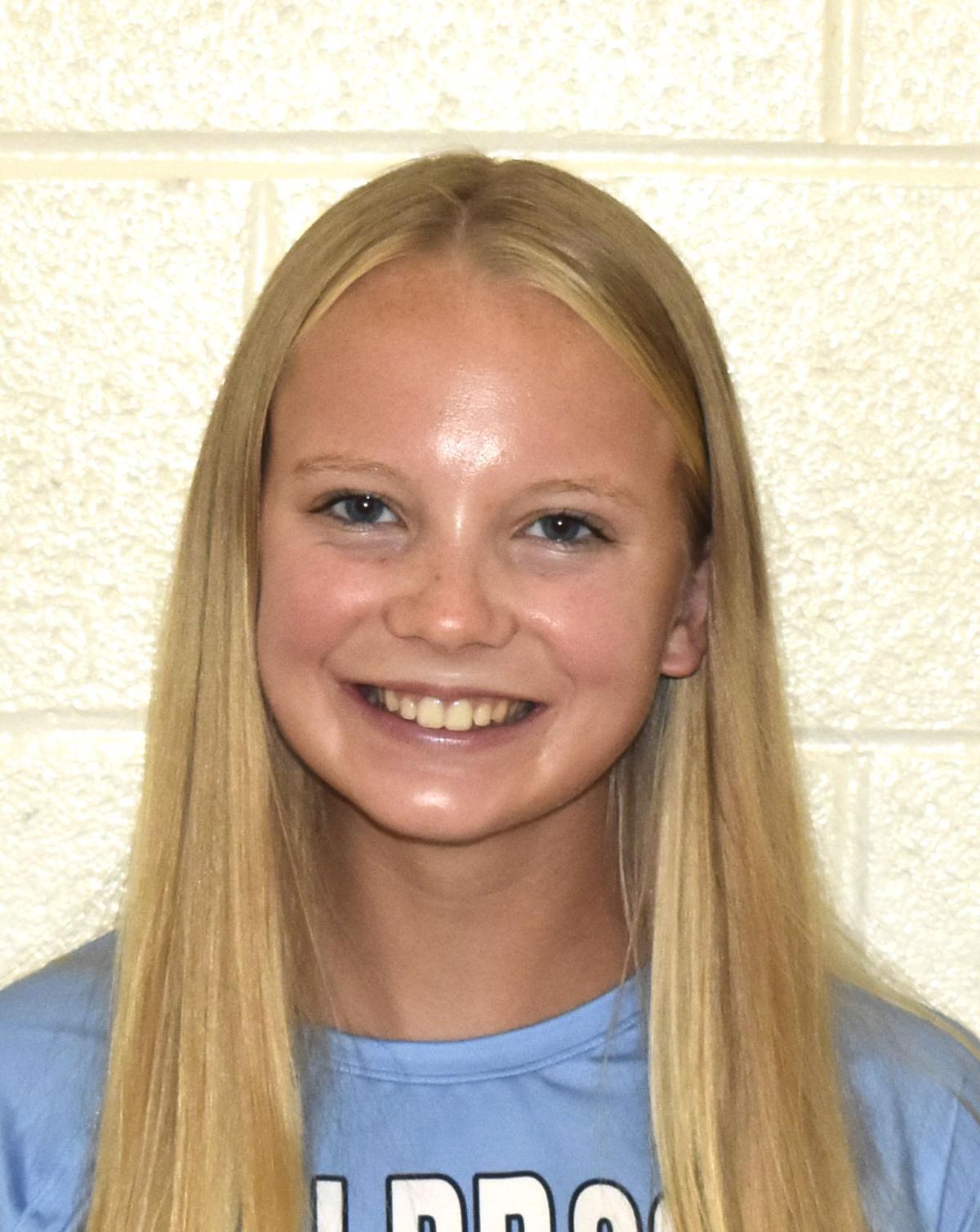 WINCHESTER — Millbrook senior outside hitter Madelyn White said it took “months” of emailing University of Central Arkansas beach volleyball coach Autumn Erickson before she received the first response from her.

Pioneers indoor volleyball head coach Carla Milton has talked about her team’s “no-quit attitude” frequently this year. White and Millbrook senior libero Autumn Stroop have it in abundance, and it’s one of the reasons why they’ll be taking their volleyball talents to the highest level.

White and Stroop each signed a National Letter of Intent to compete for NCAA Division I schools in beach volleyball on Thursday in a ceremony involving teammates, parents and school personnel in Millbrook’s auxiliary gym.

“They’re good academic-wise and they’ve gotten better each year with their game,” Milton said. “The two of them in the sand, it’s definitely helped in their coverage on the court with defense for us.

“They’ve given a lot to this program. They genuinely want their teammates to excel, and they want the program to do well.”

They’ve certainly helped the Pioneers thrive in standard indoor volleyball this year. Millbrook is 22-2 and will play at Blacksburg on Saturday in the Class 4 state quarterfinals in the Pioneers’ first state tournament match since 2017.

But the 5-foot-5 White and the 5-5 Stroop feel like their all-around games are suited particularly well for beach volleyball, which involves two-player teams instead of the six on the court in standard volleyball. Five pairs play for a team in a college beach volleyball match. The regular portion of the beach volleyball season runs from February to May.

“The playing part I like because I’m short, and Autumn will tell you the same thing,” said White, who has 346 kills, 260 digs and 53 aces this year for Millbrook. “We don’t really have a shot at playing indoor volleyball [at a major program]. Beach volleyball offers an opportunity to be competitive at a high level without being super tall.”

White started played beach volleyball in seventh grade in Loudoun County, but her participation in the sport picked up significantly in 2018 when her parents Dave and Joy created the beach program at Blue Ridge Volleyball in Winchester.

“I really liked [playing in Loudoun],” White said. “But my parents were like, ‘We’re not driving you over the mountain every day. You need to have something here.’”

Stroop started playing beach volleyball two years ago, and her first tournament was with White.

“I just thought it was so fun and so cool,” said Stroop, who has 469 digs, 50 aces and 75 assists for Millbrook this year. “It’s still a team experience, but you’re only working together with one other person. I just wanted to pursue it. I kept going to tournaments and kept trying. I fell in love with it.”

White and Stroop not only have a place to train locally with Blue Ridge, but they also get to compete in tournaments near and far throughout the year. They’ll train outside as long as it’s above freezing, and there are indoor sand tournaments in the winter.

White ticked off California, Alabama, Louisiana, Florida, New Jersey and North Carolina as some of the states in which she’s competed. White and Stroop will play with various partners, but they’ve competed a lot together over the years.

White said another thing she likes about beach volleyball is that she sees a lot of the same people at the events she and Stroop travel to throughout the country. White notes that while beach volleyball is growing, there are only about 90 programs in the country, which is a lot fewer than the approximately 1,800 indoor college volleyball programs.

White is looking forward to joining the Central Arkansas family. The Sugar Bears — who went 18-16 last year — compete in the ASUN Conference.

White said she later found out the reason why Erickson wasn’t responding to her emails was that the coach didn’t have any positions available on her 2022-2023 team, and she didn’t want to give White any false hope. But when Erickson found out one of her players was transferring, she contacted White, and within a month she was invited to campus. Erickson offered her a spot on the team during the visit. One week after her trip, White announced her verbal commitment on Sept. 29.

“The community felt like Winchester,” said White of her trip. “We got to go to a football game. It was family weekend, and there was tailgating. The fact that everyone treated me like I had lived there my entire life ... people I didn’t know were coming up to me and saying, ‘Hey, you want some food?’ The Southern hospitality thing really stuck out to me.

“And I got to watch the girls practice and watch how they supported each other. It’s a really small team [14 players] compared to most beach teams in the country.”

White said she wants to be a doctor but is looking into studying political science and also taking pre-med classes. White said she’s accumulated enough college credits already that she’ll enter Central Arkansas as a sophomore in the classroom.

Stroop also took the email route in contacting her school, Texas A&M-Corpus Christi. The Islanders of the Southland Conference went 16-12 last year under Gayle Stammer, now in her sixth year as head coach.

Stroop made contact in June and visited Corpus Christi in August.

“The coach showed a lot of interest, which really helped me in choosing that school, because they showed that they cared,” said Stroop, who didn’t get the sense from the other schools that she spoke to that they had as much interest in her as Stammer. “Once I visited, I just fell in love with the school and saw myself there the next four years. I really love the campus, but the main thing was the coach’s interest. She showed that she wanted to make me a better player and person.”

“We’re close friends, even outside of volleyball,” Stroop said. “I still talk to her today. She gives good advice about the school and volleyball in general.”

Stroop will study forensic psychology. She is excited about that, because not every school offers it as a major.

White said it meant a lot to share Thursday’s signing with Stroop. White said the duo wasn’t always sure they could play at the Division I college level. But as they kept beating strong opponents and kept working, they realized anything was possible, and they’ve made it happen.

“We’ve been playing together since middle school, so this is really, really cool,” White said.

“I’m super happy we get to celebrate together,” Stroop said.

White and Stroop hope they might be able to play against each other in college at some point. Until then, they’ll continue to enjoy their moments together.

Two months ago, the pair teamed up at the Chesapeake Wave Fall BNQ in Ocean City, Md., and qualified for a national tournament that will take place in Florida next summer.

“We beat a couple of college commits that we didn’t think we were going to beat, so that was really fun,” White said. “Getting that national bid was super, super hard, and we did it together. People probably think, ‘Those kids are little. They’re not going to be able to hit.’ And then we come out and play really well together.”