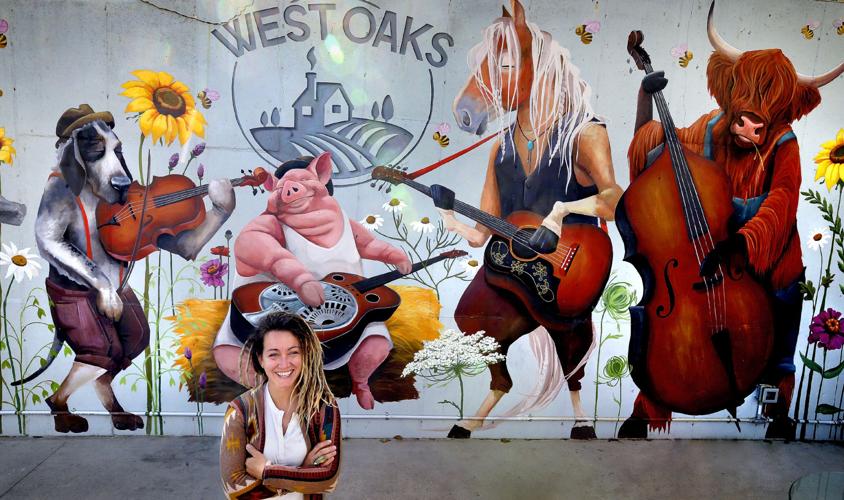 Sarah Gallahan, of Frederick County, with the mural she painted on an 80-foot-long cement wall at West Oaks Farm Market on Middle Road in Frederick County. Gallahan, a self-taught artist, started painting when she was 5 years old. 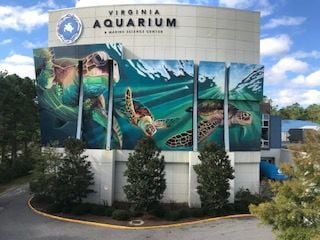 Sarah Gallahan at work on a mural. 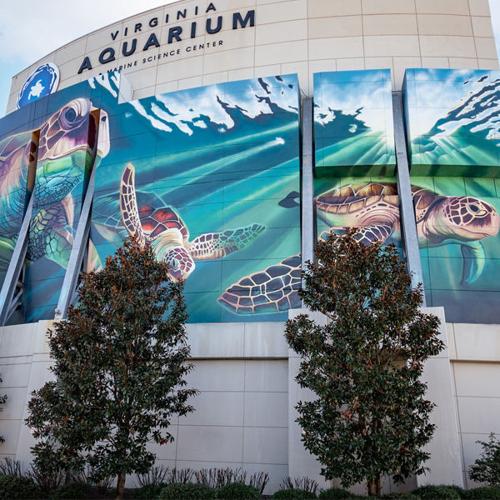 Sarah Gallahan painted this mural on the Virginia Aquarium in Virginia Beach.

Sarah Gallahan, of Frederick County, with the mural she painted on an 80-foot-long cement wall at West Oaks Farm Market on Middle Road in Frederick County. Gallahan, a self-taught artist, started painting when she was 5 years old.

Sarah Gallahan at work on a mural.

Sarah Gallahan painted this mural on the Virginia Aquarium in Virginia Beach.

If you live in the Northern Shenandoah Valley, you’re probably familiar with artist Sarah Gallahan’s work, whether you realize it or not. You might have taken a selfie in front of one of her murals, used it as a landmark or stopped to admire one of her creations for a variety of reasons — as a history lesson, for its playfulness or to note the sheer magnitude of the undertaking.

Gallahan is a sought-after muralist and portrait artist who was born and raised in Frederick County. She now makes a living sharing her work on a grand scale with the public by adorning the insides and outsides of all sorts of buildings and surfaces.

A fun day could be to create a passport for yourself that allows you to enter the world of Gallahan’s art. Try to visit as many of her murals as possible. Understand that you will be very busy and that you will probably fail. Once you are aware of Gallahan and her work, you will notice she has left her colorful mark everywhere.

At the Smithsonian Conservation Biology Institute of the National Zoological Park in Front Royal, which is open to the public once a year, Gallahan used white paint on windows that wrap around the cafeteria of the Smithsonian-Mason School of Conservation. She painted renderings of native birds to make the windows more visible. It’s a practical piece that keeps birds from slamming into the window wall and harming themselves. Drive a little bit more and you’ll discover she has adorned walls at the Social Security Department in Woodstock, Virginia’s Aquarium at Virginia Beach and in a pedestrian tunnel in Ashburn Farms.

Then, there are some unconventional large-scale projects Gallahan has completed. She painted a city bus that a client turned into a dog spa, helped someone turn a bread truck into a boutique, painted a bus that is used as a STEAM (science, technology, engineering, art and math) laboratory at Slanesville Elementary School in West Virginia and worked on the top of a barn roof to incorporate a 1932 Oldsmobile into a piece in Strasburg.

If you see someone painting the new Paladin location on Piccadilly Street in Winchester in the next few weeks, it will be Gallahan. If you visit John Handley High School, she’ll be over there, too, working on a project in the school’s library.

Gallahan, it seems, is indefatigable.

If you want to take on the challenge of visiting all of her work, rest up now and pack some energy bars. Your stamina will need to match the 36-year-old’s and that might be difficult. Gallahan painted her first mural when she was 15 and her energy hasn’t waned.

You might wonder how she does it. From what well does she draw her creativity and practical know-how? Gallahan says she is self-taught. “When I was little, I drew all of the time. Others knew before I did that I was good,” she says. One of her mother’s friends asked her to draw a mural of a stone wall when she was a teenager. She did it. The woman loved it, and the positive feedback motivated Gallahan and got her another mural job.

She continued to paint portraits and murals, but she has really bumped things up in the past six years or so. Her husband Justin says he calls her Polly Ann after the character in the tall tale of “John Henry.” Polly Ann stepped in and picked up a hammer to finish a job that her husband, who had mythical strength, started. Her strength mirrored her husband’s.

The couple, who now have three children, met when they were freshmen at Millbrook High School. They were in a class together when the teacher had them do an exercise that involved holding hands. Justin snuck over to the side of the room where Sarah was so that he could hold her hand.

When they got married, Justin could see how important art was and would be to Sarah. He worked at a local factory so that she could focus on her art. About six years ago, Justin was diagnosed with multiple sclerosis. Two years ago, he had to go on disability.

He says Sarah “picked up the hammer like Polly Ann did when John Henry died” and kept going. Gallahan says she could not do it without Justin’s support. “He has always supported me in every way. If I am gone on a job, I know he is taking care of things at home.” Their teamwork allowed her to intensify her workload and refine the practical steps she takes to accept large projects. She established several ways for clients to find her through “Sarah Gallahan Art” on Facebook, Instagram and via email at sgallahanart@gmail.com.

One of her first big murals is on the side of Solenberger’s True Value Hardware. It depicts Winchester-Frederick County history. Gallahan says, “They’re a great family and I love supporting locals. They trusted me to represent them with such a large job. They really helped get the ball rolling for me.”

The scale of Gallahan’s work can boggle the mind. People ask her all of the time how she is able to see the big picture when she is up close to a mural. How does she convey perspective on a flat surface or one that has divots? She says she doesn’t really “know” how she does it. She says it’s often easier for her when the space is bigger.

The hardest part, she says, is making sure that she learns enough about a client and their business to represent them. “You know, I just want to paint and to start painting. But, I take a lot of notes. I start sketching. I send them sketches and collaborate with them.” Gallahan says it takes time to come up with a plan, but it pays off. “As an artist, you have a style. I like working with a lot of different people because I get to change it up.”

That ability to change things up is essential for a muralist as successful as Gallahan. When going on site to complete a job, she has to understand the weather, the way the light falls at certain times of the day and during different seasons. Early fall is often the perfect weather for doing an outdoor piece in the Northern Shenandoah Valley, according to her.

Summertime can be challenging. She says she tries to stay hydrated. Using a heavy spray painter in the heat can take a toll. “It’s a workout. But, I get into the flow. So it doesn’t really matter. It’s later that night when I am just…ugh,” she laughs as she falls back and slouches in her chair.

If a job is delayed by rain, Gallahan says she usually has an indoor job lined up somewhere else until the skies clear. She says clients are very understanding. Gallahan thinks each job has a sort of “artist’s curve.” “The first few days when I start painting are exciting. Then I start to dive. But then I get some feedback and it always comes back up by the end.”

The longest she has spent on a job has been about two weeks.

Another bonus to making art that is publicly consumed on such a grand scale is the positive feedback Gallahan hears while she’s working and once the work is done. It keeps her going, just like it did when she first started out as a teenager. “I am currently working in Middletown Elementary School. I asked to work during the day so the kids could see and get excited. I want them to ask questions and feel like they are a part of it. Plus, they say the nicest things to me,” she says, smiling.

“I love doing things for kids. The mural I did at the pediatrician’s office [Winchester Pediatrics] means a lot. I hope it keeps kids distracted when they are getting shots so that they have a different association with being there.”

She says the work she did on the Winchester Rescue Mission also left an impact on her. Gallahan did the outline of the mural and then the community came out and helped paint it. She hopes the experience and the bright art “gets to someone.”

Whether it’s a sheep making music on a harmonica with an accordion-playing donkey amid sunflowers or a mural of the wending Seven Bends with hot air balloons floating overhead, there is something that ties Gallahan’s murals together. She thinks it might be the colors. “I tend to use vibrant colors even when I try to mute it. I also love art nouveau-style. But, my style changes all of the time.”

If you ask her, Gallahan believes she is right where she is supposed to be — making art. “I honestly don’t think I am supposed to be doing anything else. It is all I’ve ever done. I just want to paint.”

Amazing, Awhile back they were trying to fine a restuarant for painting a murial on the bullding and now they want them everywhere? Only in Winchester can this happen.

That is how our Local Government rolls. Bad one day and good the next.

Amazing God given talent!! Love her work, seen a lot of it!