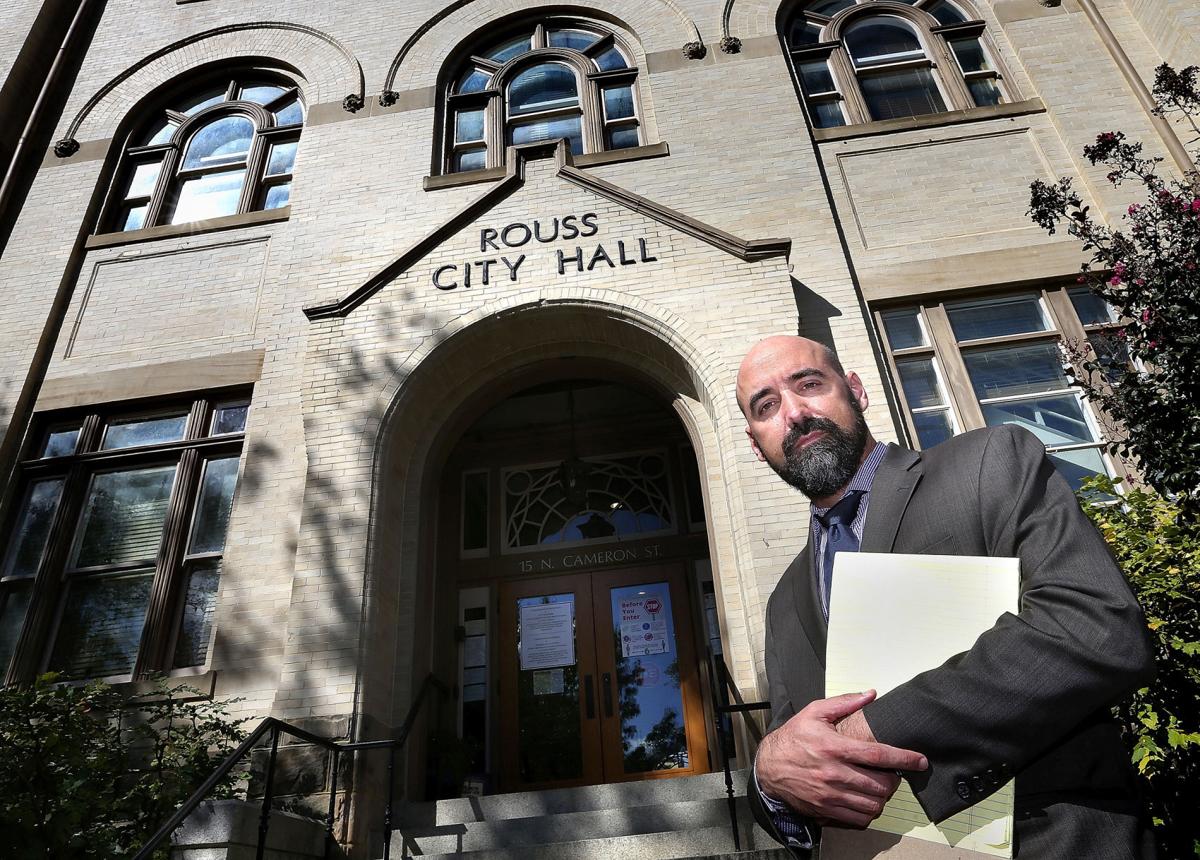 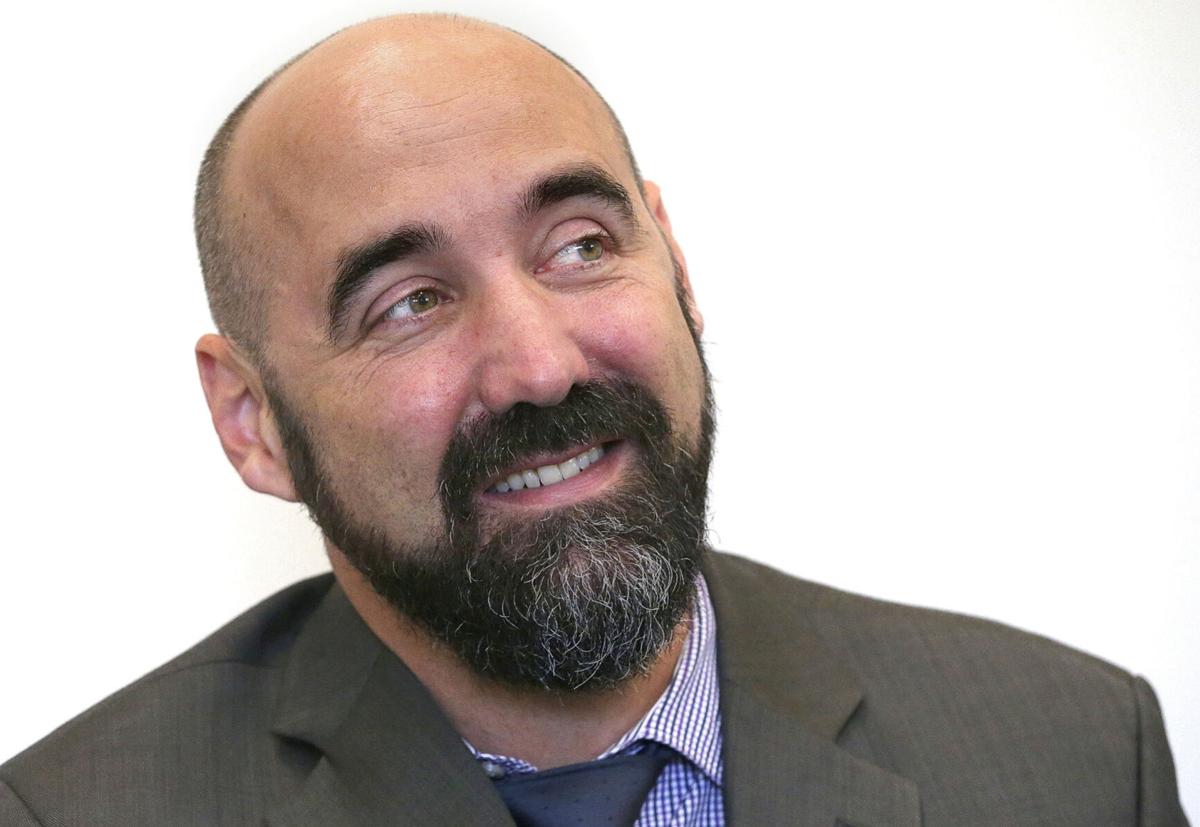 WINCHESTER — Perched on the credenza of Dan Hoffman’s new office is a framed photograph of a sweet-faced, elderly woman he became friends with a few years ago.

She was homeless, he explained, and Hoffman took a personal interest in her well-being. When she died, there was no family to mourn her, so Hoffman volunteered to help dig her grave.

He displays her picture in his office, he said, because she reminds him that, as Winchester’s new city manager, he is here to serve everyone.

Daniel C. “Dan” Hoffman started his new job Monday. The 43-year-old South Carolina native came to Winchester via Gainesville, Florida, where he had served as assistant city manager since July 2017.

“I don’t see this job as one where you lead from a desk,” he said.

On Friday evening, Hoffman will join the Winchester Police Department for a 12-hour ride-along to learn more about the city’s public safety concerns and the challenges facing law enforcement.

In two weeks, Hoffman will work a full 24-hour shift in one of the city’s four fire and rescue stations so he can get a better handle on the responsibilities placed on Winchester’s career firefighters and paramedics.

“Within the first 60 days, I’ll do a full-shift ride-along in every [fire and rescue] station,” he said. “I’ll eat there, bunk there. I want to see the conditions in which they’re working, the status of their apparatus. ... I want them to know I’m doing my best to understand their day-to-day lives.”

Right out of the gate, Hoffman has already been tasked with finding a new leader for the Winchester Fire and Rescue Department.

He said he’s pleased so far with the performance of Hadden Culp, who has served as interim chief of the Fire and Rescue Department since June.

“We’ve been really lucky to have an interim chief who has brought some stability,” Hoffman said. “We’re obviously going to find a permanent chief, but we’re not going to rush it. I want to figure out first what type of chief we need, and to do that, I’m going to need to see first-hand the culture of the department, where the needs are.”

Hoffman said he’ll also work with Culp to address the findings of an April report by Emergency Services International Consulting of Chantilly that revealed how years of escalating tensions between the Fire and Rescue Department and Rouss City Hall caused staffing shortages within the department and left residents and businesses inadequately protected from fires or medical emergencies.

“There will be changes we have to make to address the issues,” Hoffman said. “We’ll be developing a strong and clear vision of the next 10 to 20 years.”

Hoffman graduated from George Washington University in 1999 and earned a master’s degree from Johns Hopkins University’s Carey Business School in 2008.

He and his wife, Lindsay, lived for a short time in New York before he was named communications and marketing director for the Washington, D.C.-based nonprofit Bread for the City. He joined the district’s Child and Family Services Agency in March 2006 as a program manager, then, starting in June 2007, spent five years with the Nuclear Regulatory Commission. He became chief innovation officer for Montgomery County, Maryland, in October 2012, and also served as an adjunct professor for the University of Maryland’s School of Communications.

Gainesville provided Hoffman with his first gig in a municipality management position, and Winchester is the first place to hire him as a city manager.

“It’s not your normal 9-to-5 job,” he said. “But I’m lucky here because there’s a strong foundation, a great staff and a [City] Council that, although they have their differences, is very constructive and collaborative.”

When he’s not running the city, Hoffman is responsible for finding a new home for his wife and their two sons, Will, 15, and Chuck, 12.

“We’re under contract on a new house, so hopefully we’ll be closing on that by the end of the month,” he said. “That’s when the rest of the family comes up [from Florida]. I’m very much looking forward to that.”

Someone willing to get to know those who they will be leading or working with? What a novel, out of the box concept!

Happy to see someone who believes in rolling up their sleeves and understanding the issues by observing the job and talking to the people who do them. I was a manager for years, and those who were willing to do this were the best leaders.

Totally agree. They never ask an employee to do anything they have not done. Welcome!!!!