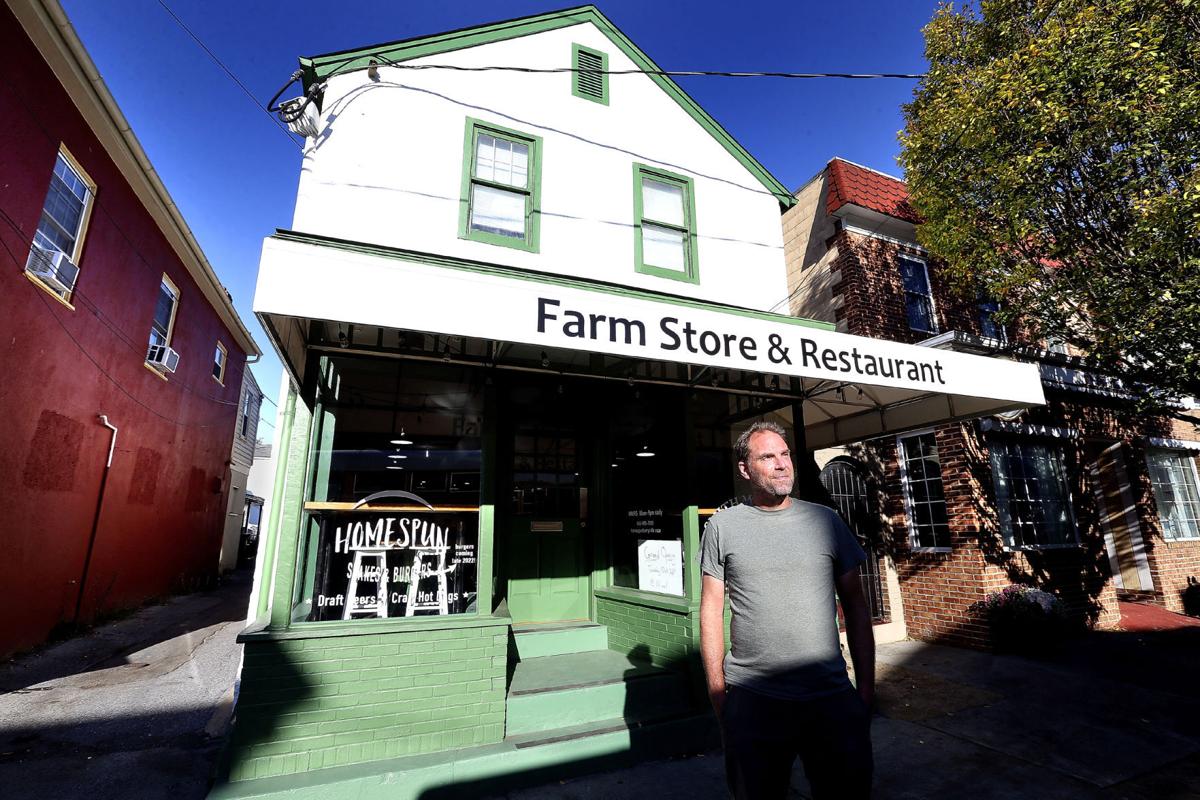 Clarke County farmer Forrest Pritchard is opening Homespun Farm Store and Restaurant at 20 W. Main St. in Berryville at 10 a.m. Tuesday. The fast-casual eatery will sell craft hot dogs, paninis, soup, chili and ice cream, along with items from his family's Smithfield Farm, such as grass-fed meats and cheeses. 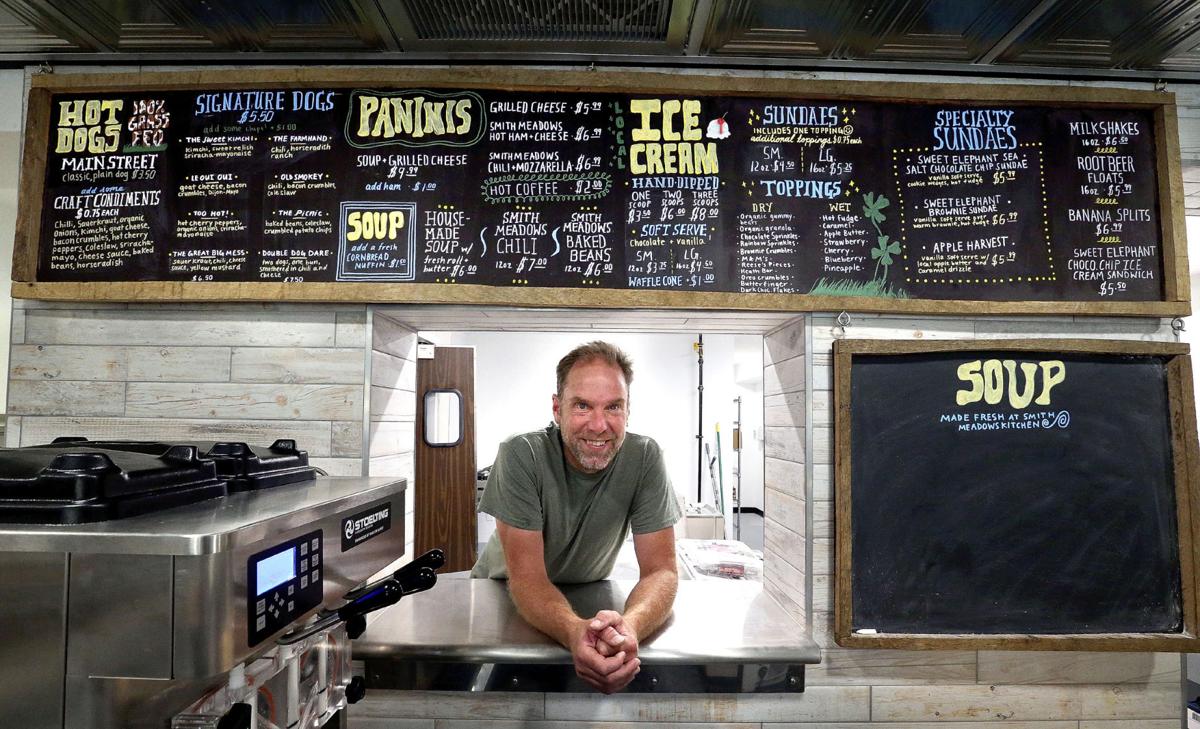 Clarke County farmer Forrest Pritchard behind the counter at Homespun Farm Store and Restaurant at 20 W. Main St. in Berryville, which opens for business on Tuesday.

Clarke County farmer Forrest Pritchard is opening Homespun Farm Store and Restaurant at 20 W. Main St. in Berryville at 10 a.m. Tuesday. The fast-casual eatery will sell craft hot dogs, paninis, soup, chili and ice cream, along with items from his family's Smithfield Farm, such as grass-fed meats and cheeses.

Clarke County farmer Forrest Pritchard behind the counter at Homespun Farm Store and Restaurant at 20 W. Main St. in Berryville, which opens for business on Tuesday.

BERRYVILLE — Homespun, a new eatery opening in downtown Berryville on Tuesday, is unique in that it's both simple and sophisticated.

A visitor feels almost like he's stepped inside a farm shed rather than a restaurant.

That leads to the next uniqueness: Homespun is a farm-to-table restaurant. Except for some beverages, everything on the menu is produced either at Smith Meadows Farm near Berryville or other farms or homegrown businesses within approximately a 25-mile radius of Clarke County.

Another simplicity is the limited menu and how it will be served.

Hot dog and sandwich options, plus soups, chili, baked beans and ice cream treats, are displayed on a handwritten, chalkboard menu board hanging above the counter. Place your order there and pick it up when your name is called. Then go sit down and eat.

"It's all intended to reflect the idea of being homespun," said owner Forrest Pritchard.

The sophisticated element comes from how the food will be prepared.

Hot dogs can be ordered with either simple or gourmet toppings. You like mustard? What kind — yellow or Dijon? Coleslaw and sauerkraut? Coming right up! How about some goat cheese or bacon crumbles, or some cherry pepper pieces, to top it off?

The only meats served will be 100% grass-fed beef and pastured pork, according to Pritchard.

Sandwiches will be paninis made with locally-produced cheeses.

Homespun will serve ice cream from South Mountain Creamery in Middletown, Maryland, near Frederick. Both soft-serve and hand-dipped kinds will be available. Eat it in a cone or as part of a sundae with various toppings, one of which will be crumbled brownies from Sweet Elephant Bakery across the street, the menu shows.

Draft beers will be sold.

Ice cream, meats, cheeses, free-range eggs and other items will be available for purchase in quantities from refrigerated cases.

Homespun is "meant to be a hybrid of a farm store and a fast-casual restaurant," said Pritchard.

The dining area is intentionally arranged so customers will be able to chat with people sitting near them.

Because it's a small restaurant, "I think the intimacy ... is going to foster a sense of community" among customers, Pritchard said.

Pritchard runs Smith Meadows. He said the idea for the restaurant came to him because the commercial farm — which also has a market and a bed-and-breakfast inn — was producing more food than it could sell.

Other options, such as selling products on Amazon and shipping them, were considered.

But "we wanted to continue investing in our community," said Pritchard, who is the author of several books on organic farming.

He saw vacant storefronts along Main Street. The one that Homespun occupies had been vacant since 1994, he understands.

Also, he examined the local restaurant scene. It seemed to him there wasn't much variety among dining options.

Pritchard said he then decided to create "an organic gourmet (dining) experience that's not going to ... make people's eyes pop out when they get the check."

Most individual menu items range from about $5 to $10. A simple hot dog on a bun is $3.95. Free basic toppings are available, but gourmet toppings are 75 cents each.

Ice cream prices range from $3.50 for one scoop or soft-serve swirl up to $6.99 for an "Apple Harvest Sundae," with apple butter and caramel sauce, or a "Sweet Elephant Brownie Sundae," with brownie crumbles and hot fudge.

Other wet and dry toppings also are available for 75 cents each.

Don't expect to see Pritchard behind the counter taking orders. He'll usually be in the field at Smith Meadows.

Homestead instead will have five other employees.

"My job," said Pritchard, "is making sure the farm continues to operate sustainably, growing the food and letting talented (restaurant) people take it from there."

He mentioned his surprise at not having to advertise for staff.

"People came to us seeking jobs," he said. "We had more inquiries than we had positions for people."

The menu is starting off small to give employees time to provide good customer service as they become accustomed to their jobs, Pritchard said.

"If we mess up a hot dog, God bless us, we're going to be in deep trouble," he said frankly, laughing.

Eventually, though, plans are for the restaurant to expand into burgers and maybe other delicacies.

Excited to try it out - have been a fan since reading your book, Gaining Ground [smile]

I can assume this establishment is not wheelchair accessible?

I'm thrilled to see a real farm-to-table restaurant open in the area; it would be great if they also offered some vegetarian/Vegan options.

Great News. Best of the best to the new Eatery !