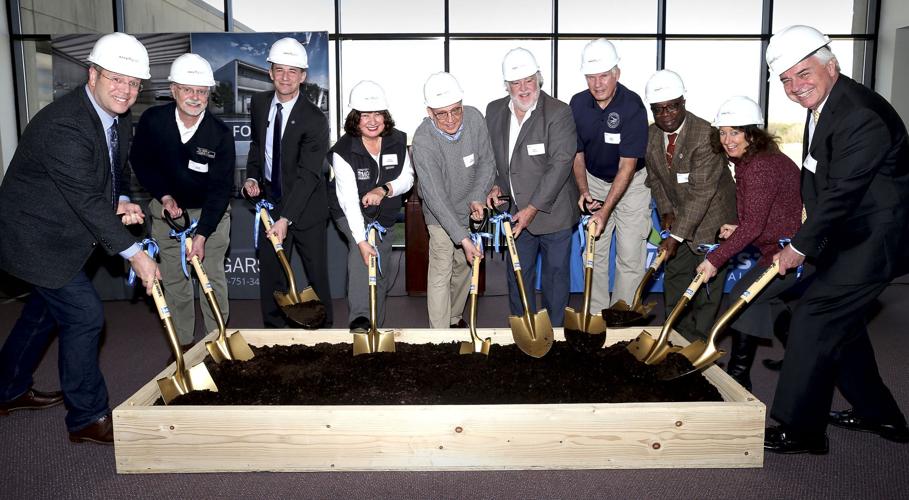 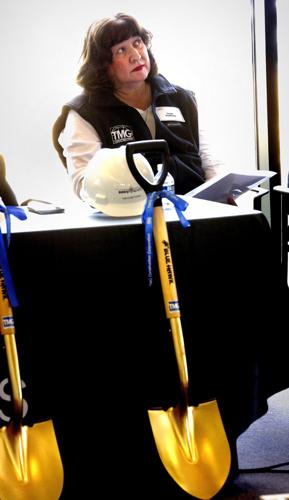 Tanya Matthews, owner of TMG Construction and KOKV Hangars, during a ceremonial groundbreaking inside the terminal at the Winchester Regional Airport Friday for the construction of new aircraft hangars at the airport.

Tanya Matthews, owner of TMG Construction and KOKV Hangars, during a ceremonial groundbreaking inside the terminal at the Winchester Regional Airport Friday for the construction of new aircraft hangars at the airport.

This is the first half of the project’s first phase. Once completed, phase one will feature 11 box-style hangars grouped into two buildings along the airport’s southeast side. This is part of a multi-year project to build 32 hangar condominiums at the airport. Collectively, the 32 hangars are known as KOKV Hangars. Each hangar will have airfield access and will be heated, insulated and equipped with a bathroom. Other amenities include central compressed air, internet, electronic access control and an outdoor picnic area. Additional configurations are available to meet the needs of each owner.

A condominium association established by TMG will operate and manage the hangars, which are for sale and range in price from $567,000 to $620,000.

“We’ve been waiting a long time for this day and I can’t tell you how thrilled we are to finally have our groundbreaking,” TMG President Tanya Matthews said during a groundbreaking ceremony inside the airport terminal at 491 Airport Road in Frederick County.

A partnership between TMG and the Winchester Regional Airport Authority was formalized in June.

TMG Executive Vice President Joe Matthews said the hangars are “about providing community and a home away from home for all of us.”

“It’s going to increase the airport’s economic output,” Sabo said. “It’s going to bring high-quality, in-demand aviation infrastructure to this region. And while it’s true that airports can be challenging environments for innovation, and the status quo is often the winner, it didn’t happen this time, and we are so happy about that.”

The first six hangars should be ready for use in the summer. Then TMG will begin construction on the next five hangars to complete the first phase.

The overall build-out of KOKV Hangars will take up to six years.

“Not only are they incredibly reputable people, some of the nicest people you could ever meet, they’re also very well-qualified,” Sabo said. “And their company has a long list of qualified projects at airports that are in the aviation industry. And they did not flinch whatsoever when we started talking seriously about development at our airport.”

For more information about the project, visit www.kokvhangars.com or call 540-751-3480.

The Winchester Airport is for only private planes, no commercial flights. We shouldn’t pay for rich people to store their planes. A private airport should be privately funded.

Lots of "taxes" are got by the Gubment man buying those planes and paying for gas and hanger fees etc. So naturally the envious boo hoo about taxes. never mind 50% who dont pay a dime in federal income tax. Never mind them. Cheers

Rich people getting cheap plane taxes while the rest of us pay ridiculous amounts for cars. Thanks a lot GOP!

Effective immediately, the Handley Regional Library System will no longer accrue overdue fines on most children’s materials — no matter what the age of the person checking them out. These items include books, CD audiobooks and DVDs.

MIDDLETOWN — In promotion of its newly launched drone program, Laurel Ridge Community College hosted a Drone Day on Tuesday to let the community learn more about the new program and allow potential students to try their hand at flying drones.

WINCHESTER — Apple Blossom Mall is hosting a back-to-school denim drive, “Do Good with Denim," through Sept. 5.

WINCHESTER — A local tradition for half a century returns this weekend to Frederick Douglass Park.

BOYCE — Town Council will give residents with inoperative vehicles on their property a final warning before getting tough with them.

WINCHESTER — CMA’s Subaru of Winchester on Wednesday received a trophy for the dealership’s efforts providing the most bicycles for children during the local 2021 Toys for Tots fundraiser.

A Front Royal man and his son died on the Potomac River in Maryland on Monday.

WINCHESTER — Vacant land on the south side of Crossover Boulevard could become home to a 331-unit residential complex called Winchester Crossover Apartments.

A house in the 200 block of Retreat Lane in northern Frederick County was destroyed by fire Wednesday morning.