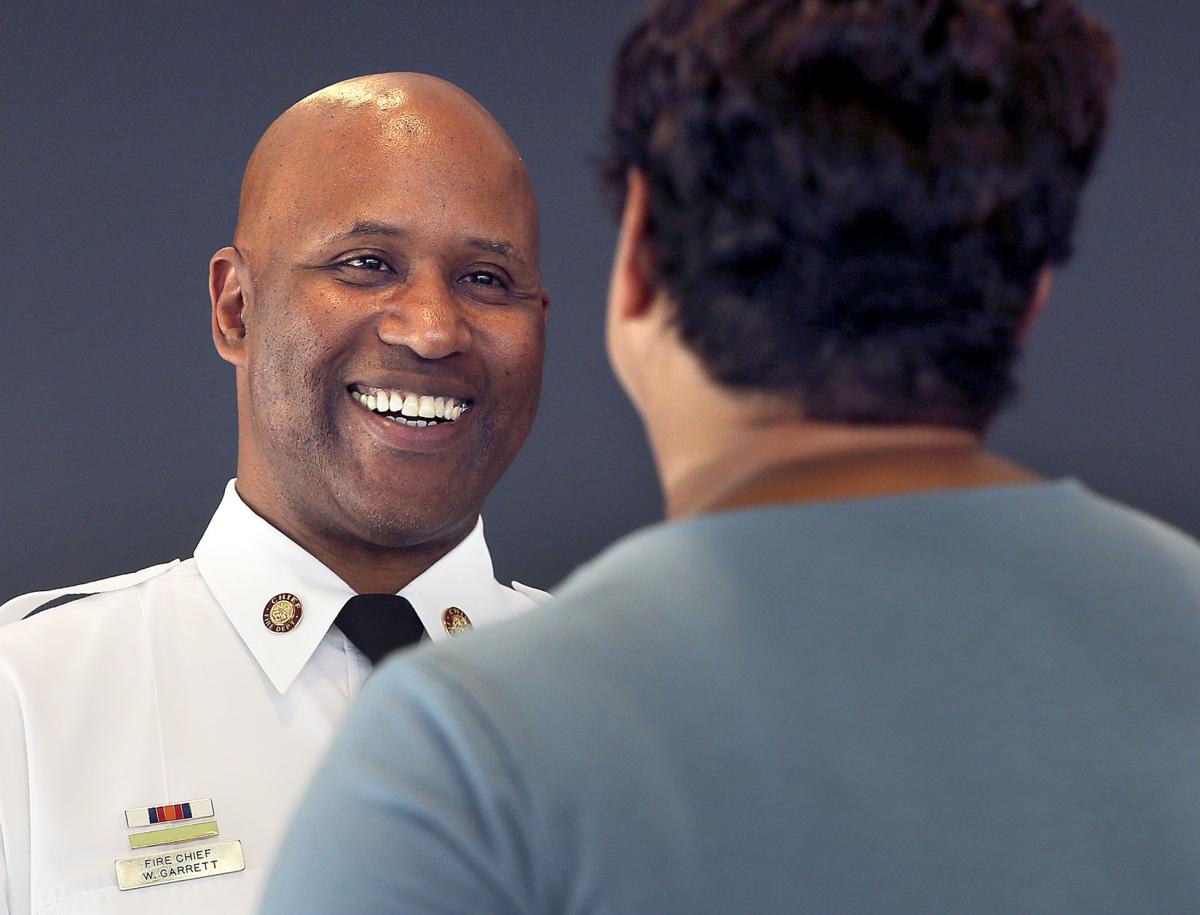 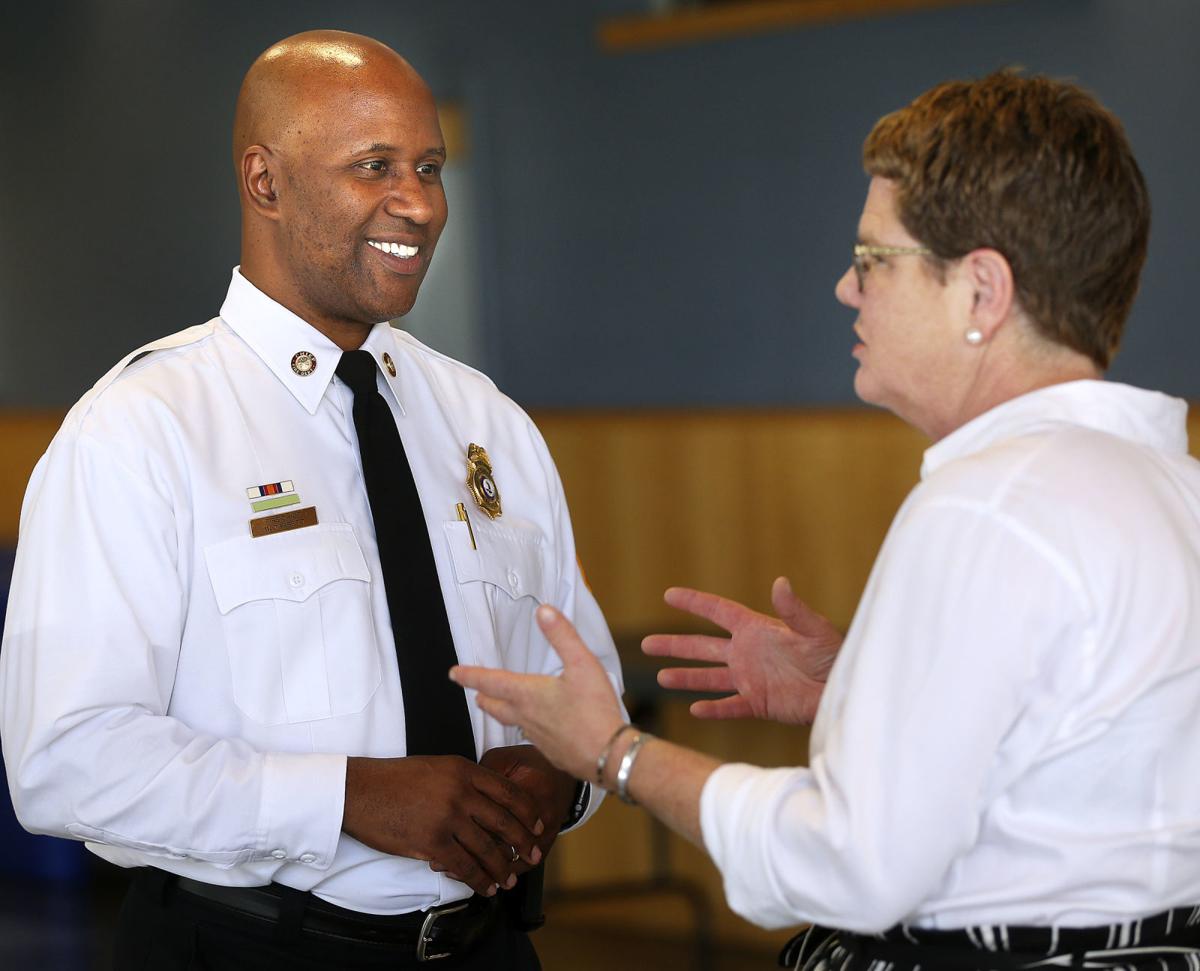 WINCHESTER — Fire Chief William A. Garrett’s first three months in Winchester have been spent learning about the Fire Department and the community.

“The first three months have gone by fast,” Garrett said on Monday after a meet-and-greet with the public in the Jim Barnett Park Recreation Center.

The meeting with about 20 people, including City Council members and City Manager Eden Freeman, was part of a welcoming process that has included Garrett meeting with residents both formally and informally since beginning work on June 3. Garrett, 51, came from the Fairfax Fire and Rescue Department, where he began working in 1989 and was most recently a deputy chief.

Garrett said questions included what procedures are available to help firefighters deal with workplace emotional trauma. He said in addition to the city’s Employment Assistance Program, an informal fire chaplain program was in place. Garrett said he’s working to formalize the chaplaincy program to assist firefighters and members of the public experiencing trauma related to things such as surviving a bad crash or fire.

Garrett said he was also asked about whether he had moved to Winchester. He said he and his wife purchased a house last month and are moving in this week.

Besides learning about the community and department, Garrett is working on preparing the department for the challenges of the future. They include recruitment and retention, maintaining four- to five-minute response times as Winchester’s population grows, and increasing the number of firefighters who are paramedics.

Of the department’s nearly 70 paid firefighters, all are emergency medical technicians, but just 21 are paramedics. Paramedics have more medical training than EMTs. Garrett wants to increase the number of paramedics to 30. That’s because the vast majority of calls firefighters respond to are crashes or medical calls, which is part of a national trend as improved fire codes and technology reduce fires.

Of the 6,219 calls firefighters responded to last year in Winchester, 169 — about 2.7% — were fire calls. Of those calls, only four involved major fires. Garrett said training all firefighters to be paramedics would be too expensive, but having 30 would mean there are paramedics on all shifts.

Recruitment and retention includes trying to increase the dwindling number of volunteer firefighters. The shrinking number is part of a national trend, as there are fewer volunteers available because of jobs and family commitments.

The department, which has a $6 million annual budget, presently has 15 volunteers who respond to at least 24 calls annually and do a minimum of 24 hours of annual training to maintain their firefighter certification. There are also at least 50 volunteers who do administrative duties and fundraising. In Winchester, the fire stations and most of the equipment is volunteer-owned.

Garrett,who began his career as a volunteer, said he’s also hoping to increase the number of minorities and women in the department. About 9% of Winchester’s population is black and 17% Hispanic or Latino, according to the U.S. Census Bureau. However, Garrett is the only black paid firefighter and there are no Hispanics or Latinos, although there are a handful of African-American and Hispanic/Latino volunteers. The department has three paid women firefighters.

This week, Garrett said the department plans to hire a company to study the department’s strengths and weaknesses. City Council recently approved spending up to $50,000 for the study, which will be part of Winchester’s long-term strategic plan.

The evaluation, expected to be completed in four to six months, will include responding to demographic changes. For instance, as the population ages, the department will need to look at areas where there will be more responses to medical calls such as nursing homes, senior centers and elderly-living complexes. Other aspects of the evaluation will look at where fire stations are located in terms of response times and what types of industry are in the city in terms of responding to fires or hazardous material leaks or spills.

The evaluation will also look at how to increase staffing per unit to meet national recommendations. The National Fire Protection Agency recommends four firefighters per vehicle during a shift, but Garrett said Winchester sometimes only has one or two firefighters per unit.

“The evaluation will come with strong recommendations and identify gaps and identify areas where we are doing well,” Garrett said. “From that point, we’ll begin the strategic planning process, where we align with the city’s comprehensive plan to incorporate the needs of a high-quality fire and emergency medical service to meet the needs of the citizens.”