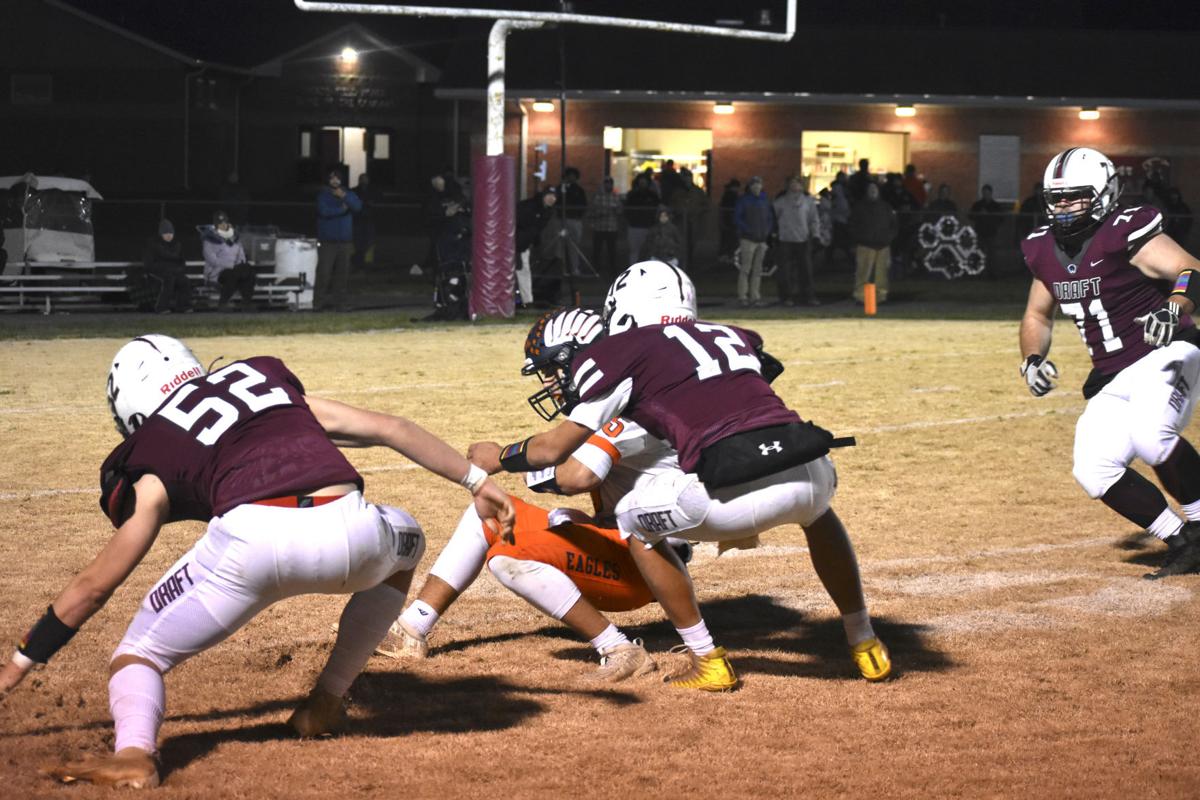 Stuarts Draft’s Landon Graber (12) and Kyle Coffey (52) swarm Clarke County quarterback Matthew Sipe and tackle him for a loss after he had to retrieve an errant snap in the first quarter of the Eagles’ 33-3 loss to the Cougars at Stuarts Draft on Friday night in the Region 2B semifinals. 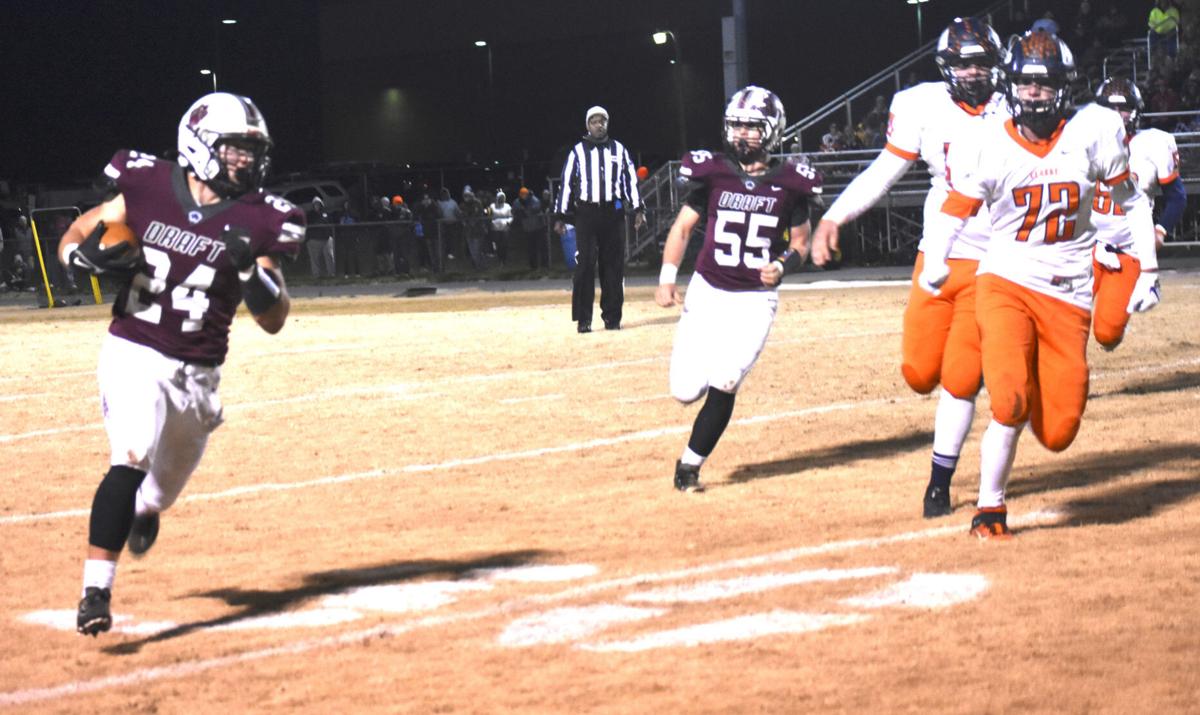 Stuarts Draft’s Aaron Nice picks up yardage in the second quarter as Clarke County’s Jeremy Burns (72) pursues. Nice ran for 272 yards and five touchdowns on 38 carries as the Cougars beat Clarke County 33-3 on Friday night in the Region 2B semifinals. 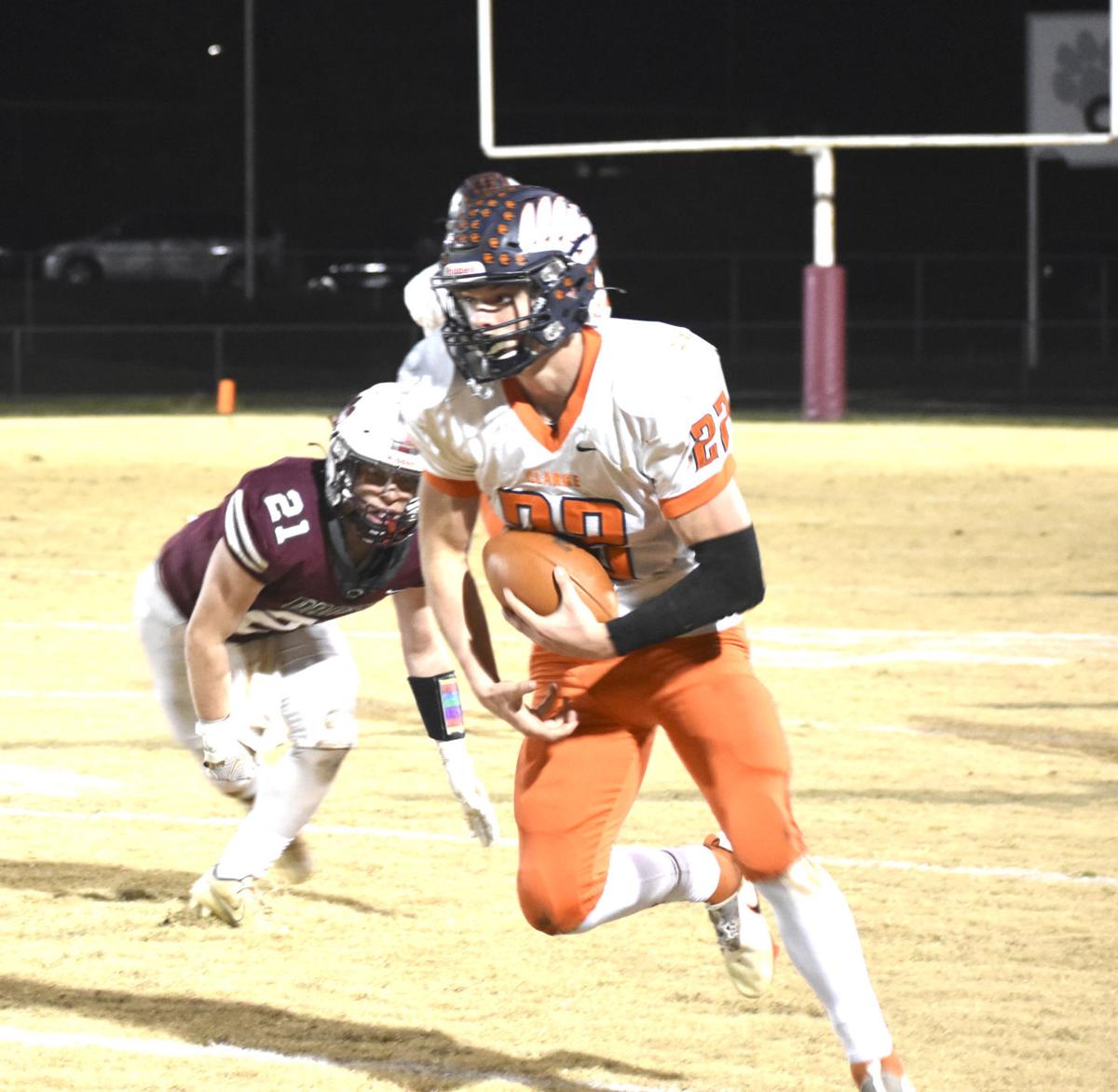 Clarke County's Kyler Darlington had 76 total yards in the Eagles' 33-3 loss at Stuarts Draft in the Region 2B semifinals on Friday night.

Stuarts Draft’s Landon Graber (12) and Kyle Coffey (52) swarm Clarke County quarterback Matthew Sipe and tackle him for a loss after he had to retrieve an errant snap in the first quarter of the Eagles’ 33-3 loss to the Cougars at Stuarts Draft on Friday night in the Region 2B semifinals.

Stuarts Draft’s Aaron Nice picks up yardage in the second quarter as Clarke County’s Jeremy Burns (72) pursues. Nice ran for 272 yards and five touchdowns on 38 carries as the Cougars beat Clarke County 33-3 on Friday night in the Region 2B semifinals.

Clarke County's Kyler Darlington had 76 total yards in the Eagles' 33-3 loss at Stuarts Draft in the Region 2B semifinals on Friday night.

STUARTS DRAFT — The Clarke County football team was left wondering what might have happened had a few offensive plays gone differently on Friday night.

Stuarts Draft? There wasn’t much to lament on that sideline. The Cougars’ offense was about as efficient as it gets.

All-State running back Aaron Nice ran for 272 yards and scored all five of Stuarts Draft’s touchdowns in a 38-carry performance as the second-seeded Cougars beat No. 3 Clarke County 33-3 in the Region 2B semifinals.

After turning the ball over on downs on their first possession — quarterback Landon Graber fumbled and wound up diving on the ball for a one-yard loss on fourth-and-1 from the Clarke County 41 — the Cougars (9-2) scored touchdowns on five of their next six possessions for the last 33 points of the game.

Stuarts Draft will travel to No. 1 Central (10-1) next week for the Region 2B championship game. The Falcons beat No. 4 Strasburg 29-8 in Friday’s other semifinal.

“He was a tank,” said Eagles senior defensive end/offensive tackle Jeremy Burns of Nice, who is also an All-State linebacker and has a scholarship offer from NCAA Division II Frostburg State. “He would run hard and run directly at you. You had to go low on him and you had to gang tackle him. They send two or three [blockers] up in the hole at the same time. Just trying to find him, it was difficult the entire night.

“Props to him. He was a heck of a ballplayer, and I wish the best of luck to him moving forward.”

Nice had 193 yards on 27 carries at halftime, but Clarke County was still within striking distance at 14-3. But Karim Grigsby returned the second-half kickoff 82 yards to the Clarke County 5. Two plays later the 5-foot-11, 215-pound Nice plowed in from one yard out, and the third of three Brice Dennison extra points made it 21-3 Cougars.

“We just worked hard all week doing our game plan, and we just executed tonight,” said Nice of the offense.

The Eagles didn’t have much luck on offense. They were held to a season-lows in points and yards (104). But they had a chance to be in a much better position than they were at halftime.

After taking possession of the ball following that Stuarts Draft turnover on downs, Clarke County drove 51 yards to the Stuarts Draft 7-yard line.

On third-and-4 from the 7, quarterback Matthew Sipe (7 of 10 for 63 yards) rolled to the left and was tackled for a one-yard loss on a play Clarke County coach Casey Childs said was not the one the Eagles intended to run. Clarke County settled for a 25-yard Chris LeBlanc field goal to make it 3-0 with 4:18 left in the first quarter.

Down 14-3, Clarke County drove 65 yards over nine plays to the Cougars’ 7 to set up a fourth-and-1. But running back Kyler Darlington (10 carries, 54 yards; two catches, 22 yards) was stuffed for no gain after taking a direct snap and running up the middle with 2:22 left in the first half.

“I don’t know what happened. I don’t know if we blocked it right or not,” Darlington said. “There was a wedge, and they got through. I wasn’t able to push through.”

That play and the play that preceded the field goal were two of several plays in the first half where the Eagles’ execution was off.

Clarke County went three-and-out on the game’s opening possession when the ball wound up on the ground after Clarke County couldn’t secure the snap on third down. On Clarke County’s third possession, Sipe was tackled behind the line of scrimmage twice after scrambling to pick up errant snaps, creating a third-and-23 from the Eagles’ 11-yard line that led to a punt.

“[Wrong plays] happen,” Childs said. “Against [Stuarts Draft], you have to score touchdowns, but we wanted to put points on the board, so we kicked the field goal. On the fourth-and-1, the hole was there, but I have to watch the film to see what happened.

“We had a chance early to put 14 points up and get momentum. But that doesn’t change the fact [Stuarts Draft is] really good.”

Clarke County’s drive to the Stuarts Draft 7 featured the last three of the Eagles’ five first downs for the game. Clarke County only ran nine plays in the second half (three three-and-outs). Sipe nearly connected with an open Cordell Broy (two catches, 38 yards; minus-3 yards on three carries) for a deep gain into Stuarts Draft territory on the Eagles’ second play of the second half, but Sipe’s pass hit the back of the helmet of a Cougar player scrambling to cover Broy.

“They’re quick off the ball, and they were stopping our inside runs pretty good,” Darlington said.

Stuarts Draft coach Nathan Floyd said he told his defense to play fast and read their keys, and he was pleased with how the Cougars executed against Clarke County’s single wing. The Eagles had nine plays for negative yardage and finished with 41 yards on 23 carries.

“The kids won their one-on-one battles, and we got to the ball and tackled well,” Floyd said.

And there was practically no stopping Nice on offense. Nice ran well going straight up the middle, but he was particularly effective in Stuarts Draft’s shotgun wing-T offense when he lined up on the side, went in motion toward the middle after the snap, then took a pitch en route to the opposite side of the line.

Nice broke a lot of tackles but also had some big blockers up front to help move him along.

“It wasn’t any secret what they were doing,” Childs said. “We tried everything. We changed our alignments, we tried pinching, we tried slanting, we tried stunting.

“Hats off to them. Their kids got off the football and moved us. I’ve always said if you can move people up front, you’re going to win a lot of football games. That’s what they did tonight. They just moved us and pushed us around.”

Floyd said he challenged a couple of his offensive linemen to be better with their play this week, and he liked how they responded.

He wasn’t surprised by how well Nice took advantage of their play.

There were a lot of faces that were red with emotion for Clarke County as players hugged each other after the game. While the Eagles players were understandably disappointed, they realized they had a lot to be proud of.

For the first time since 2017, Clarke County won 10 games, and won a playoff game. The Eagles also won their first outright Bull Run District title since 2015 after sharing it in 2019 and 2016.

“We had a great bunch of guys that I’ve played with ever since Little League,” said Burns, one of Clarke County’s 15 seniors. “It’s been an honor playing with them. Especially up front. We had so much chemistry up front. It was just a blast.”

“These guys are my family,” Darlington said of the seniors. “I’m going to miss them, man. It’s just been awesome playing with them.”

Childs made sure his team understood in the post-game huddle that Friday’s game doesn’t take away from their season.

“Anytime you win a district championship, it’s a great thing,” Childs said. “Anytime you win 10 games you’ve had a great season, and you win a playoff game on top of it. Your season gets ended by the two-time state runner-up, that’s a pretty good season.

“Like I told our kids, a lot of schools and a lot of programs would love to be where we’ve been for a lot of years. We’re going to hold our heads high.”