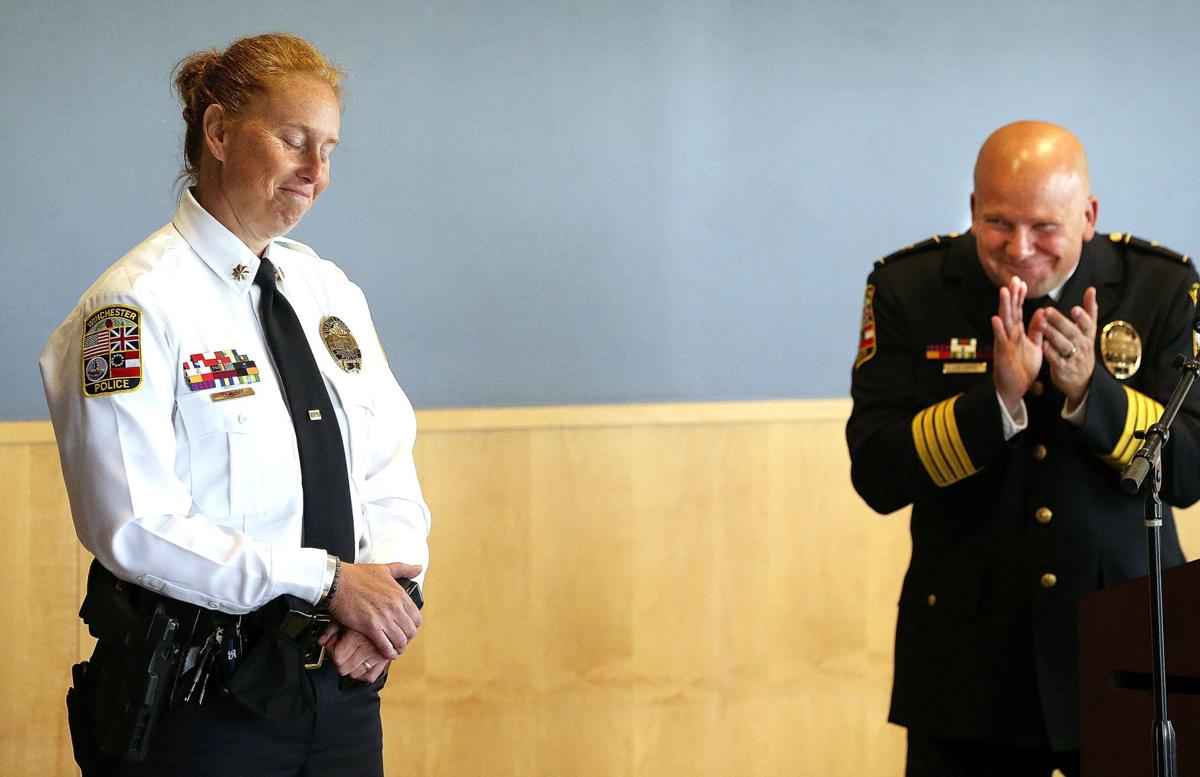 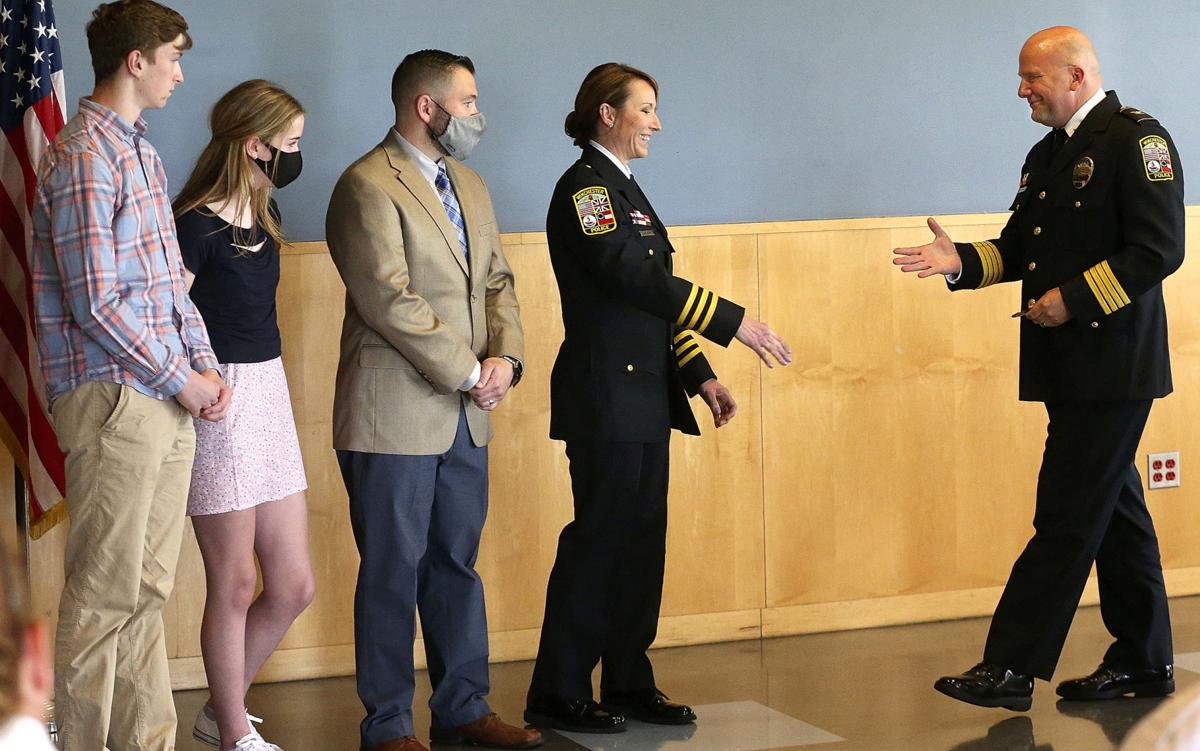 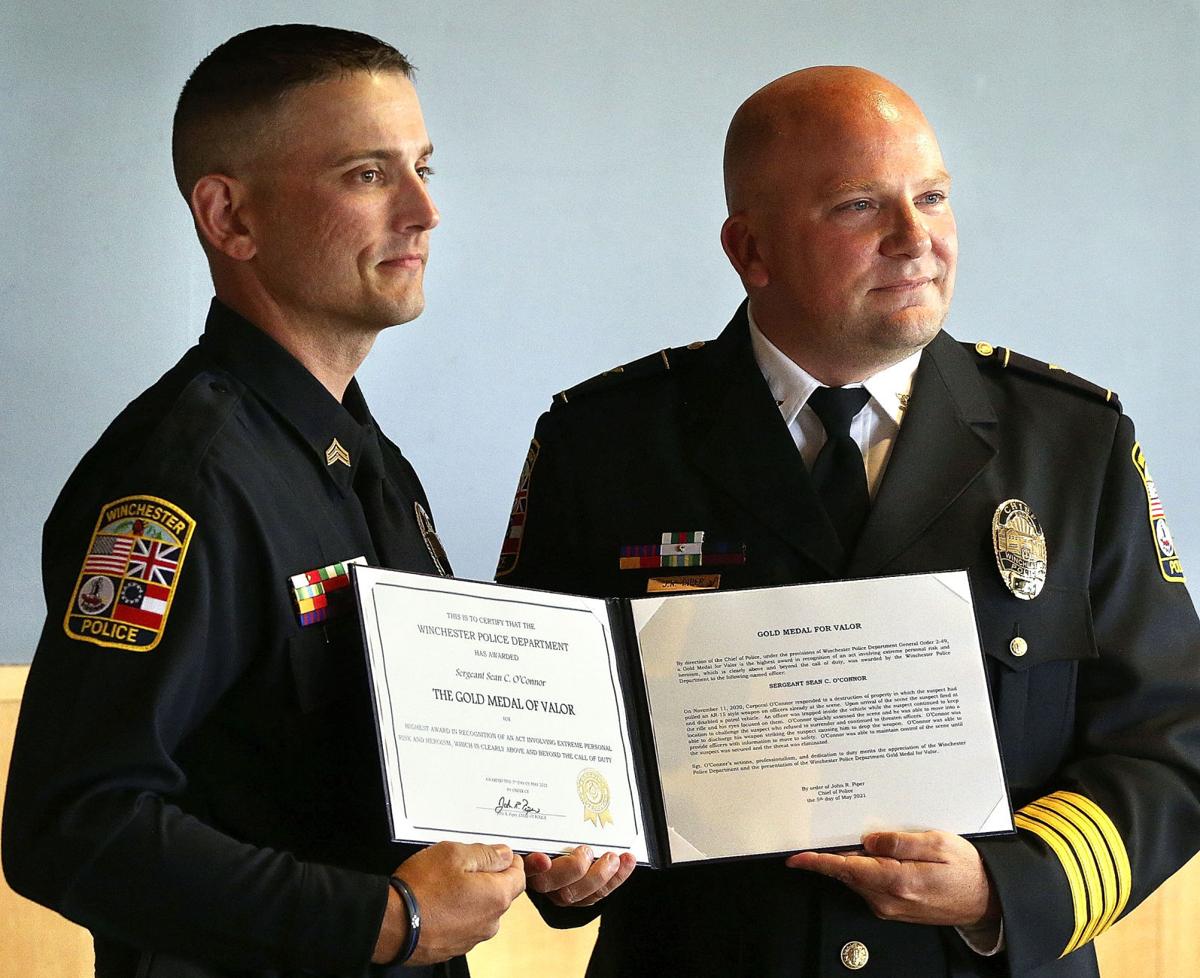 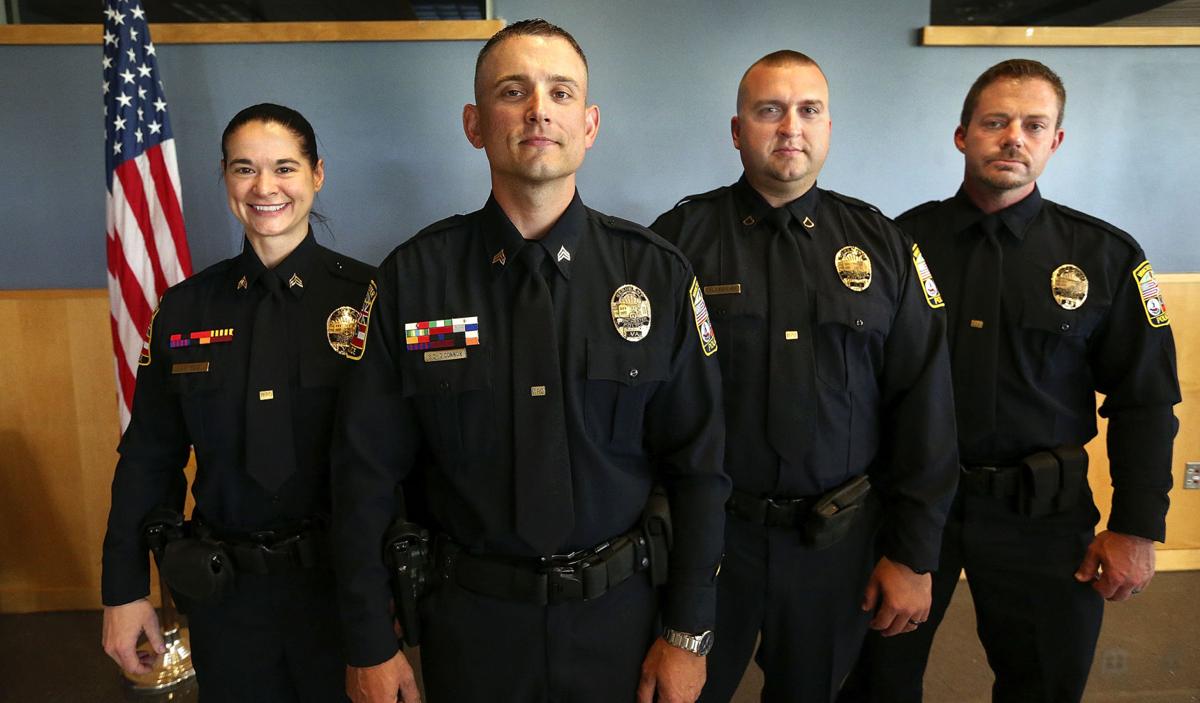 Winchester Police Sgt. Sean O’Connor (front) was presented the department’s Gold Medal of Valor, while officers Sgt. Amber Polk (back from left), Officer Luke Callas and Officer Jeffrey Ferraro, were presented the department’s Silver Medal of Valor, for their actions that involved an active shooter on Massanutten Terrace on Nov. 11 during the Winchester Police Department’s Employee Awards and Recognition Ceremony Wednesday at the Active Living Center in Jim Barnett Park.

Winchester Police Sgt. Sean O’Connor (front) was presented the department’s Gold Medal of Valor, while officers Sgt. Amber Polk (back from left), Officer Luke Callas and Officer Jeffrey Ferraro, were presented the department’s Silver Medal of Valor, for their actions that involved an active shooter on Massanutten Terrace on Nov. 11 during the Winchester Police Department’s Employee Awards and Recognition Ceremony Wednesday at the Active Living Center in Jim Barnett Park.

WINCHESTER — When he and his fellow officers were under fire during a deadly shooting on Nov. 11, police Sgt. Sean C. O’Connor said he relied on his training to stay cool.

“Training is all about what we do. If we don’t have the training, we can’t handle the stuff we get involved in,” said O’Connor, who was promoted from corporal to sergeant on Wednesday and received the Winchester Police Department’s Gold Medal of Valor. “I train as much as the agency will let me to make sure I’m making the best decisions possible.”

The 35-year-old O’Connor was among four officers honored Wednesday over the shooting, which was ruled a justifiable homicide on Dec. 1. Officers Luke Callas and Jeffrey Ferraro and Sgt. Amber Polk received the Silver Medal of Valor.

At. 6:50 a.m. on Nov. 11, Callas, Ferraro and Polk were called to the Hillcrest Apartments at 2450 Massanutten Terrace by a resident who said his neighbor, Eric Lyn Clark, smashed the window of the neighbor’s pickup truck with a sledgehammer. Shortly after Callas and Ferraro arrived at the apartment complex parking lot, Clark came out of his apartment holding an AK-47-style rifle.

Body camera footage released by the department in February showed Callas and Ferraro taking cover and trying to talk Clark into surrendering. But when Polk drove into the complex, Clark fired 10 shots with seven striking Polk’s cruiser. Polk was pinned in the cruiser for about 10 minutes until O’Connor, who repeatedly warned Clark to drop his rifle, fatally shot him with his AR-15 semi-automatic rifle from about 50 yards away.

“I knew there was no exit out, so I had to rely on my training and hunker down and make myself as small as I could to have my vehicle protect me as much as a I could,” said Polk, who was promoted on Wednesday from corporal to sergeant.

It was the second time the 40-year-old Polk, an officer since 2003, has been under fire. She was shot at during a non-fatal bank robbery in 2011.

Callas, 39, was hired in Winchester in September, but previously worked four years as a Front Royal police officer and spent about a year as a Frederick County Sheriff’s Office deputy. It was his first time under fire. He said his fellow officers were very supportive after the shooting.

“It felt good coming back,” he said.

The 30-year-old Ferraro, who was Callas’ field training officer when the shooting occurred, has been an officer since 2017. He was involved in a non-fatal shooting on North Loudoun Street in 2018. Before joining the department, Ferraro served in the U.S. Army from 2009-15, leaving at the rank of sergeant. His service included two tours in Afghanistan where he was shot at “more times than I can remember” during combat.

Ferraro is certified in Crisis Intervention Training, a tool officers use to try to de-escalate tense situations, including with mentally ill people. He said he regrets not being able to convince the 52-year-old Clark to surrender. Clark’s family said in his obituary that he had a long history of mental illness.

Dispatchers Kelly Brill, Jennifer Hardy and Andrea Turner each received the Meritorious Action Award for their handling of the shooting. Police Chief John R. Piper emphasized the use of deadly force is only a last resort. He praised all those involved.

“These dispatchers and officers utilized their experience, their training and their professionalism to bring a truly chaotic scene to a successful resolution without further loss of life to our personnel or to the public,” he said. “We’re extremely proud of them.”

In this day of violence against cops, why would a newspaper run a photo of an officer's entire family, including minor children?

Is there a hit out on them somewhere? Is there an active campaign to terrorize law enforcement?

BLM targets and terrorizes law enforcement every day. Maxine Waters advocates for that all the time.

That wasn't Black Lives Matter on January 6th trying to kill Capitol Police ...but then you know that