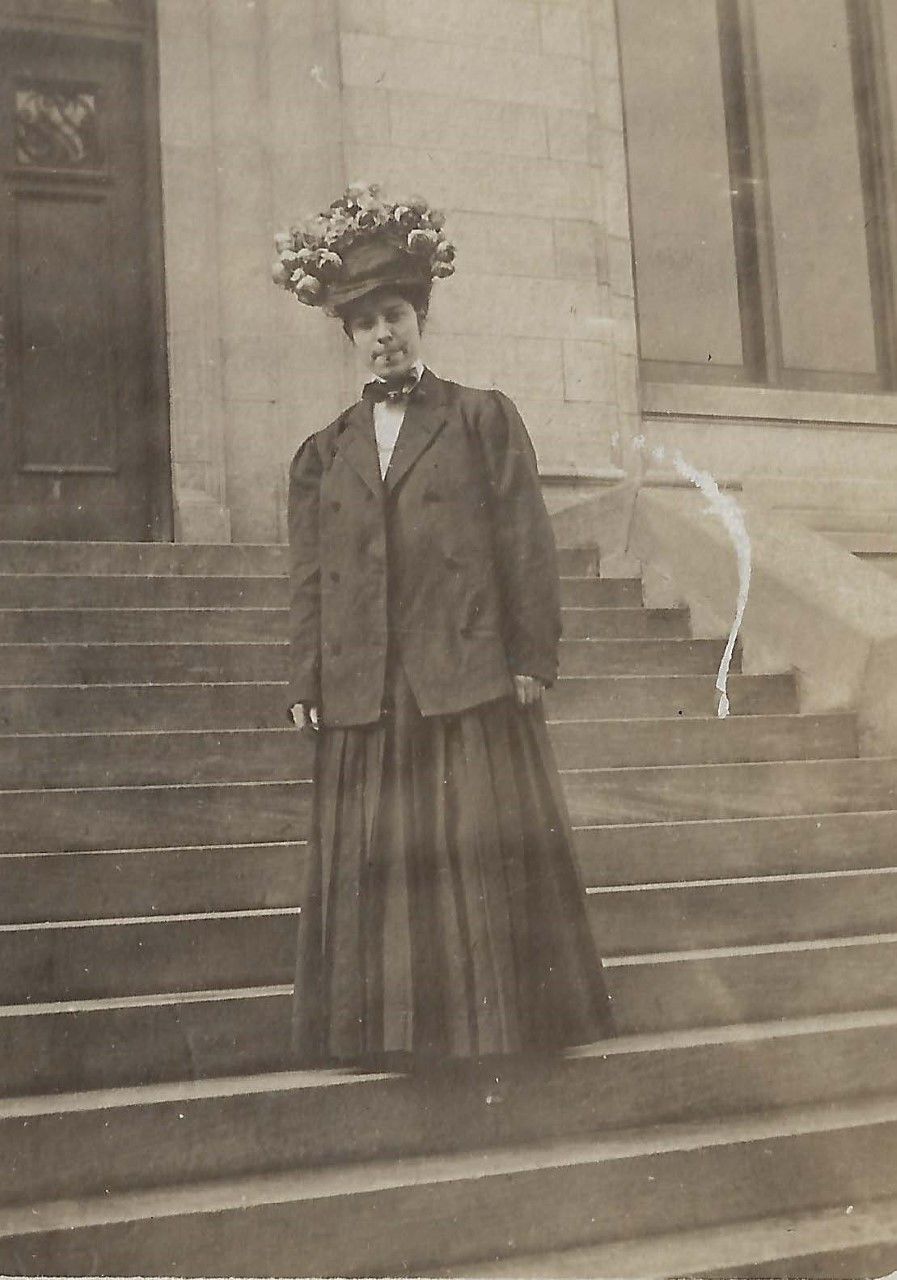 Winchester resident Charlie Robinson provided this photo of Mary Regina "Mamie" Hoffman, his grandmother, who attended President William McKinley's funeral rites. McKinley, the country's 25th president, died after being shot at the Pan-American Exposition in Buffalo on Sept. 6, 1901. He was buried in Canton, Ohio, on Sept. 19, 1901. Hoffman was 19 years at the time and traveled from her home in Pittsburgh to Canton for the obsequies. Robinson said she wrote a five-page letter about her experiences that day and her letter is in the possession of the Stewart Bell Archives at Handley Regional Library in Winchester. "Thoroughly enjoyed myself although it was a funeral," she wrote. Hoffman later moved to Hagerstown, Md. She died in 1970. One of her two daughters, Mary Potter Robinson, is a longtime Winchester resident. She turns 95 on Sept. 22. 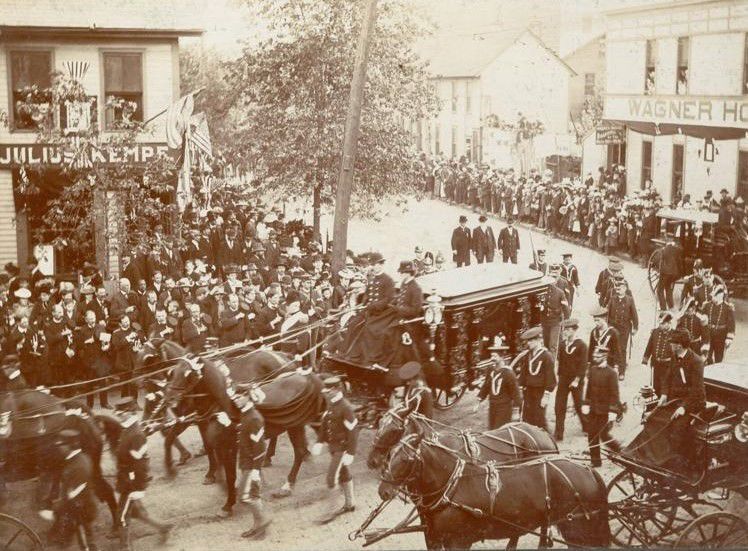 This image is of President William McKinley's funeral in Canton, Ohio. 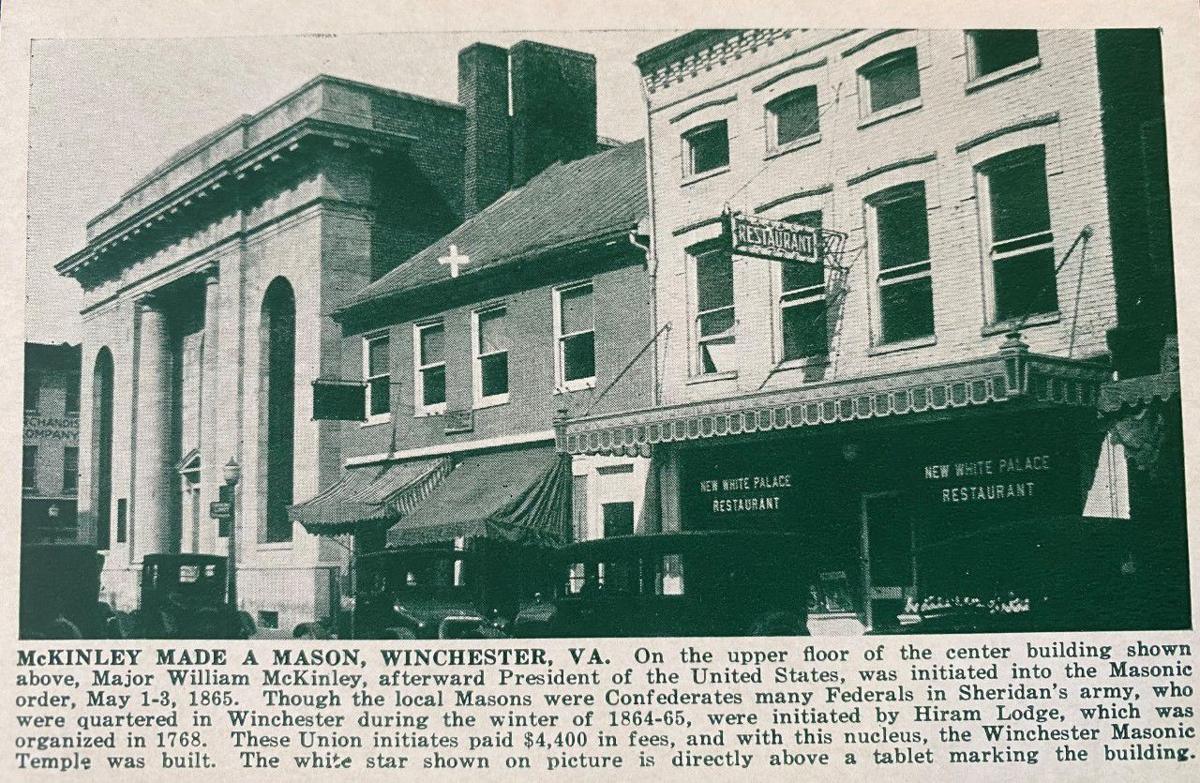 William McKinley had a connection to Winchester — he was made a mason here in May 1865.

Winchester resident Charlie Robinson provided this photo of Mary Regina "Mamie" Hoffman, his grandmother, who attended President William McKinley's funeral rites. McKinley, the country's 25th president, died after being shot at the Pan-American Exposition in Buffalo on Sept. 6, 1901. He was buried in Canton, Ohio, on Sept. 19, 1901. Hoffman was 19 years at the time and traveled from her home in Pittsburgh to Canton for the obsequies. Robinson said she wrote a five-page letter about her experiences that day and her letter is in the possession of the Stewart Bell Archives at Handley Regional Library in Winchester. "Thoroughly enjoyed myself although it was a funeral," she wrote. Hoffman later moved to Hagerstown, Md. She died in 1970. One of her two daughters, Mary Potter Robinson, is a longtime Winchester resident. She turns 95 on Sept. 22.

This image is of President William McKinley's funeral in Canton, Ohio.

William McKinley had a connection to Winchester — he was made a mason here in May 1865.

Internal revenue bureau officials acknowledged today that heads of families may, upon filing with local revenue collectors, manufacture 200 gallons of wine yearly for home use.

A branch of the Ku Klux Klan has been organized recently in Winchester, according to a letter received through the mail by The Star and signed "K.K.K." The Winchester branch claims a membership of 336, and it says it has 182 applicants pending.

The letter received by The Star was printed with pen and ink on two sheets of paper torn from a stenographer's tablet.

Mr. and Mrs. C. E. Supinger, who have been occupying one of the Bush houses on North Braddock Street for some years, have leased the Wall homeplace on North Market Street now owned by Mr. Stewart Bell, and it was understood they intend to sub-rent a number of the rooms.

As the date for the Winchester Fair rapidly approaches, all is in readiness for the speed kings who will contest for the golden trophy next Tuesday afternoon.

The motorcycle races, which will also be included in the afternoon program, consists of twenty entries.

Kitty's eight-piece orchestra will furnish music for the dancing in the afternoon and evening. Miss Kitty is the only woman in the United States leading and directing a travelling orchestra.

It is estimated that about 1,200 people attended the opening during the evening of Messrs. J.K. Green & Brother at their store on North Main Street. The crowd overflowed into Main Street and were packed about the entrance, waiting until they could get into the store.

Music for the evening was furnished by the Centenary Concert Orchestra under the leadership of Mr. John Anderson.

The outstanding feature of the opening was the special display of new things for women and misses together with accessories that go to make a woman's wardrobe.

One of the features of the advertising campaign for the Winchester Fair is the free moving picture on Main Street tonight. A very excellent feature film has been secured.

Another attraction will be that of the use of the Magnavox, an instrument which was used by President Harding in making his inaugural address. It is an instrument which, if attached to a Victrola or placed before a voice transmitter, reproduces the sound at about a hundred times greater than the original.

Permission has been secured from Mr. Allison of the McCrory's five and ten-cent store, whereby the screen will be attached on the porch of the Taylor Hotel, while the machine will be operated from the millinery establishment of Miss Hodgson, directly over Norton's store.

From the truck of Butler and Gray, which will be placed on Main Street, hot air balloons will ascend every fifteen or twenty minutes, carrying free tickets to the fair.

At about 6:30 yesterday evening the people of Winchester were startled to see a large dirigible balloon gliding slowly over the city. Large numbers of people congregated in the streets to watch this giant airship.

As it passed over the Cumberland Valley Station the figure of a man was seen to plunge earthward from the cabin of the balloon. He was falling rapidly when the parachute attached to him opened. This checked his fall and he proceeded to glide gracefully to the earth.

A number of people in automobiles, which had been following the dirigible, were on the spot when the man landed. To their utter astonishment they found it to be a paste-board man, whose out-stretched hand presented a free ticket to the Winchester Fair.

LURAY — In order to obtain equipment for moonshining, buildings in this area are being robbed of hollow lightning rods, which are converted into worms.

E.T. Brumback, a farmer of Marksville district, recently had lightning rods placed on one of his barns, located about a mile from his home and next morning the rods had been removed. This is getting to be a frequent occurrence.

Roy Kittinger, the "human fly" who is advertising products of the 3-C Nectar Bottling Corp. at the Winchester Fair this week, scaled the outside walls of the Farmers and Merchants National Bank for the benefit of the truck fund of the South End Hose Company.

An immense crowd of people gathered at the bank corner, and it was necessary for the police to stop traffic and divert it to other streets while the human fly crawled up the walls.

Mr. Kittinger is 24 years old. The climb he made was his sixty-fifth, he said.

Mr. Hable said yesterday that six of the one-story houses have already been finished and are occupied. Fifteen are under roof.

The houses, built to be leased to veterans, contain two bedrooms with adjoining bath, a large living room and kitchenette. Also a completed basement.

Hable said that the houses will have hot water heat and hardwood oak floors. All 16 should be complete by Nov. 1. The houses have already been leased, he said.

According to Mr. Hable he plans to build 20 more as materials are available.

Newberry's new enlarged store on North Loudoun Street is expected to be ready for a grand opening on Nov. 15, according to D.W. Haynes, manager.

Herman Hable owns the present building and the adjacent one into which Newberry's will expand.

The main floor will be air conditioned and have florescent lighting. A 31-stool soda fountain will be installed for fountain service and serving lunches. The basement will be used as a stockroom with an elevator to the first floor. The second floor has been laid off in offices.

Newberry's, the local realtor said, has taken a 25-year lease on the storeroom when completed. They have occupied their present location for about 20 years. The last business to occupy 139 N. Loudoun St. was the Keystone Shoe Store.

The Frederick County School Board voted Thursday to sell the school property on Fairmont Avenue extended and apply the proceeds towards the purchase of the Glass site on the Northwestern Grade.

The Glass land has been selected as the site of the new consolidated high school building.

Frederick County has the largest acreage in fruit orchards and produces more apples annually than does any other Virginia county.

This information was obtained from an article in Virginia Fruit which was written by Dr. E.L. Overholser, head of the Department of Agriculture at the Virginia Polytechnic Institute. Clarke County ranks fourth and Shenandoah County ranks fifth in the state.

Working on removing debris from the old Palace Theater building at 45 S. Loudoun St. that was ravaged by fire Nov. 20, 1969, continued today.

And as it continued, speculation mounted on what will be done with the property.

Herman H. Hable, owner and manager of the Palace theater when it opened its doors to the public on Oct. 15, 1931, was one of the pioneers of the motion picture industry in Virginia.

He and his brother, Fred, were the first men to introduce the motion picture in a modern theater south of the Mason-Dixon Line.

Shortly after the fire, the store relocated to the George Washington Hotel on Piccadilly Street on a temporary basis.

The Rev. John Peters said this morning the church's immediate plans are to use the land for parking.