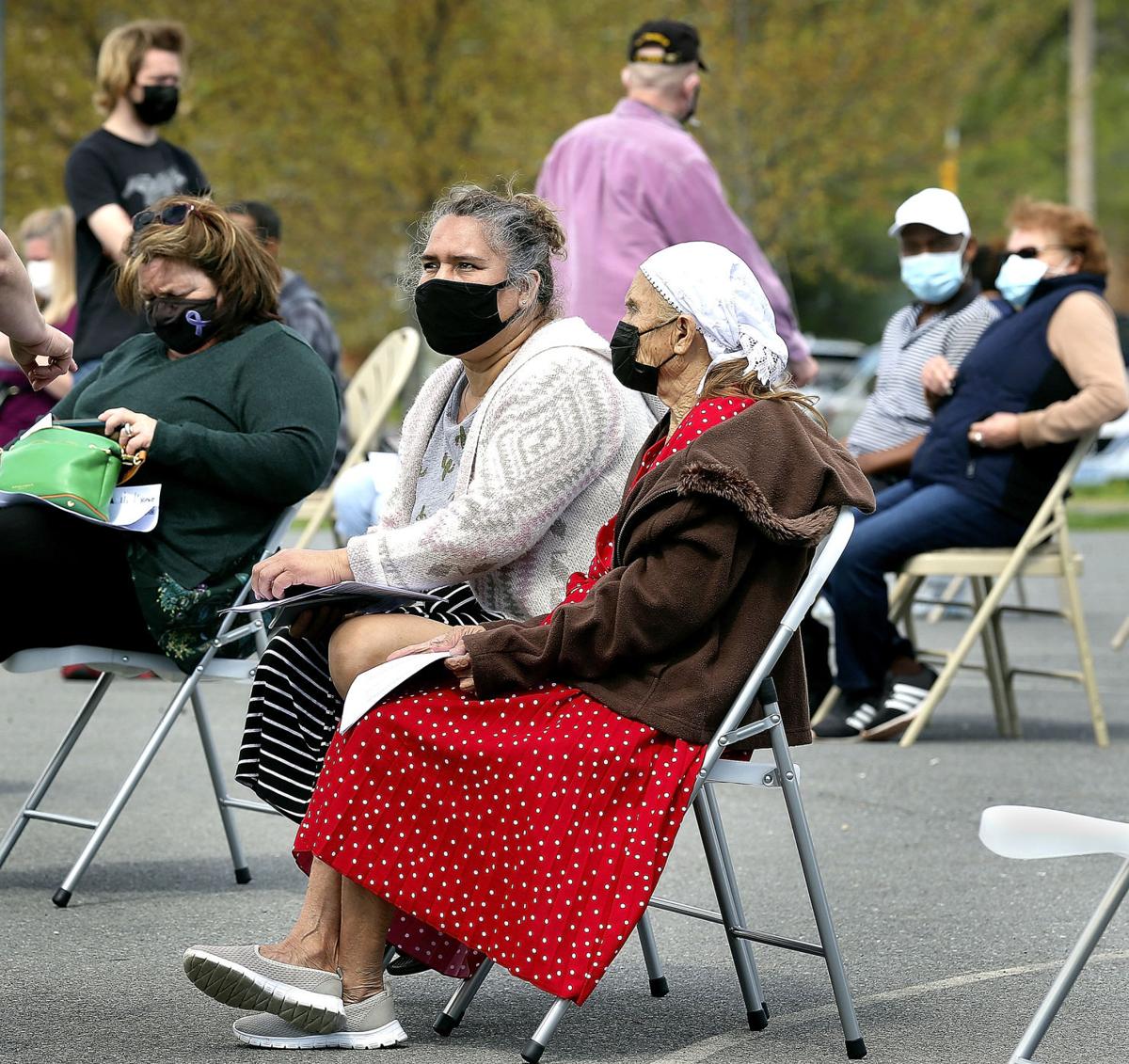 COVID-19 vaccine recipients wait after receiving their shots to make sure there are no side effects during a vaccine clinic Tuesday in Frederick Douglass Park. 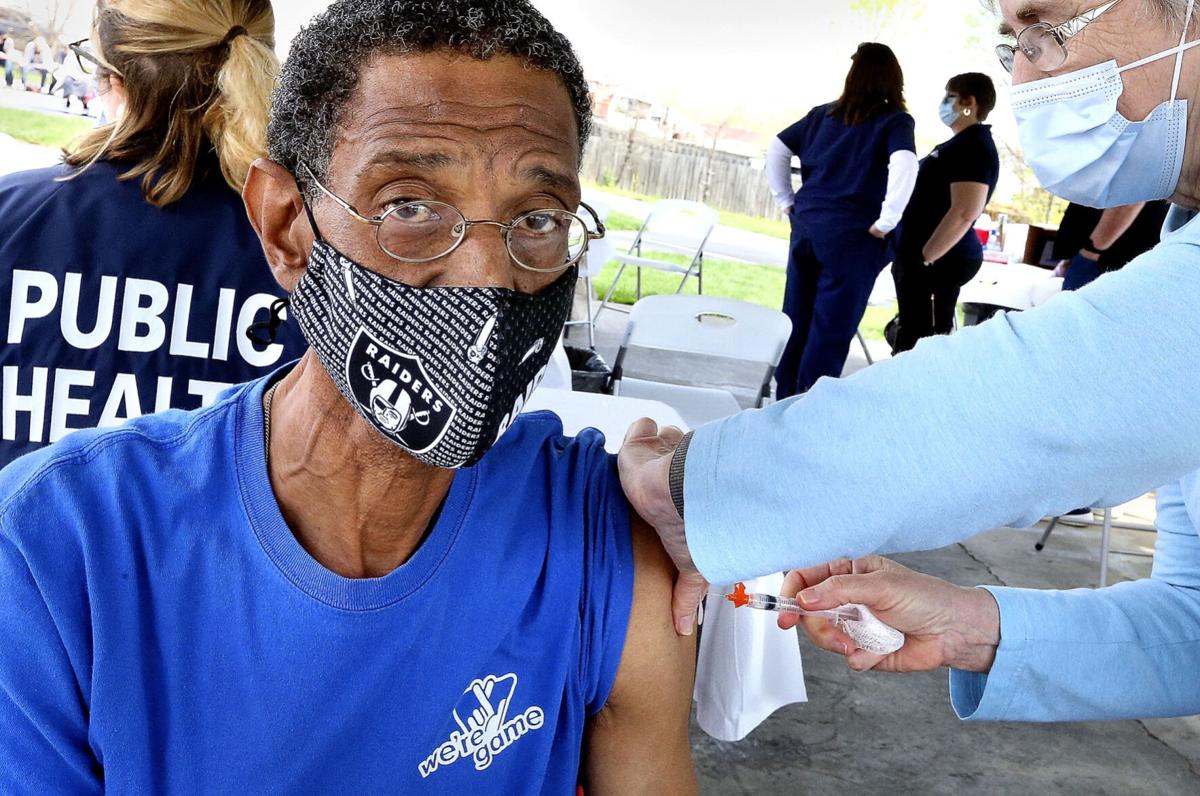 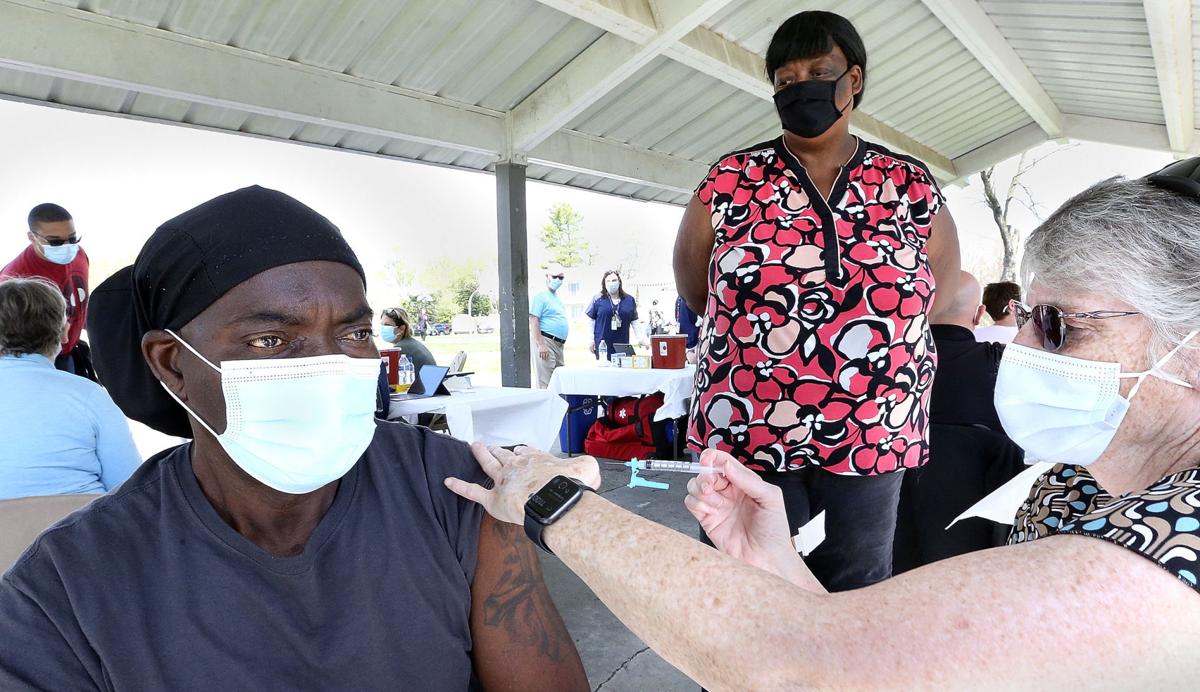 Winchester resident Hopeton Newman gets his first of the two required Moderna COVID-19 shots from nurse practitioner Jeanmarie Bechtle of Winchester as his wife, Joyce Newman, looks on during a COVID-19 vaccine clinic Tuesday in Frederick Douglass Park.

COVID-19 vaccine recipients wait after receiving their shots to make sure there are no side effects during a vaccine clinic Tuesday in Frederick Douglass Park.

Winchester resident Hopeton Newman gets his first of the two required Moderna COVID-19 shots from nurse practitioner Jeanmarie Bechtle of Winchester as his wife, Joyce Newman, looks on during a COVID-19 vaccine clinic Tuesday in Frederick Douglass Park.

WINCHESTER — On a day when global coronavirus deaths closed in on 3 million, including some 563,000 Americans, the people getting vaccine shots at Frederick Douglass Park Tuesday didn’t want to become statistics.

Among those getting the first of the two-shot Moderna vaccine was Malvia Earle, a a 63-year-old Stephens City resident and distribution center worker. Earle hasn’t gotten sick, but said some of her colleagues have. She’s been trying for about month to get vaccinated and was relieved to take part in the outreach clinic run by the Frederick/Winchester Health Department, which is part of the Virginia Department of Health. “I can’t wait for the second shot,” Earle said.

A total of 176 people received shots, according to Dr. Colin M. Greene, Lord Fairfax Health District director. There were 250 doses, and Greene said none of the extra doses were wasted. The opened vials, which must be used within 12 hours, were used on people who hadn’t made appointments. Those vaccinated on Tuesday will receive their second shot at the park on May 11.

Greene said the clinic was by appointment only as part of outreach in the North End neighborhood, which has a large number of Black residents. Black and Latino people have a far higher infection rate than white people, according to a study released in August by the National Urban League. It found that there were 62 infections for every 10,000 Blacks and 73 per 10,000 for Latinos compared to 23 per 10,000 for whites.

Greene said outreach included door knocking by health department staff and Winchester Sheriff’s Office deputies. “Good, old-fashioned shoe leather on the sidewalks allowed us to get as many shots as we did,” he said.

Among the participants Tuesday were Hopeton and Joyce Newman of Winchester. Joyce Newman, 56, said she heard about the clinic through the city Sheriff’s Office and scheduled an appointment online through the local health department. Hopeton Newman, a farmer and tree trimmer, said he and his wife will feel more comfortable about traveling once they’re fully vaccinated.

Because the vaccine is new, Joyce Newman said she’s worried about long-term side effects, but believes the benefits of being vaccinated against the deadly virus outweigh the risks. But she said she understands why some people are reluctant to get vaccinated.

A Marist College Poll of 1,227 people last month found 49% of Republican men said they weren’t getting vaccinated compared to just 6% of Democratic men. Resistance was also high among Black people with 25% saying they won’t get vaccinated. Refusal to get vaccinated threatens to prolong the pandemic and increase variants of the virus which could require developing new vaccines.

Earle said hopes she can convince reluctant people to get vaccinated.

“This is a health crisis. This is not politics,” she said. “Listen to the scientists.”

It appears the Lord Fairfax Health District has done a fantastic job of getting residents vaccinated. It has been a community effort involving Valley Health, Health Departments, and many volunteer groups and organizations. We see this everyday. Another good reason to love the Shenandoah Valley. Once again, we are so aware of the many good people out there doing good things everyday. Blessings.