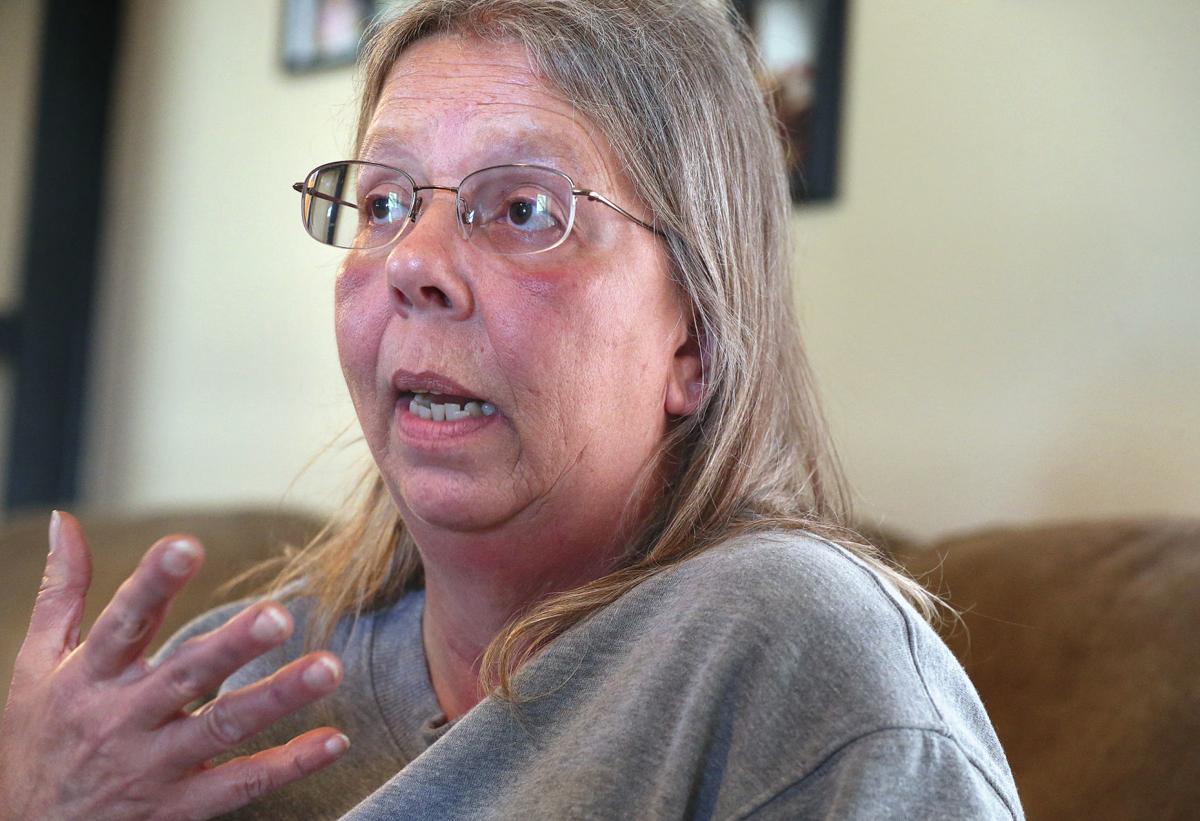 Frederick County resident Charity Ridgeway tells how the expansion of Medicaid in Virginia has helped her. 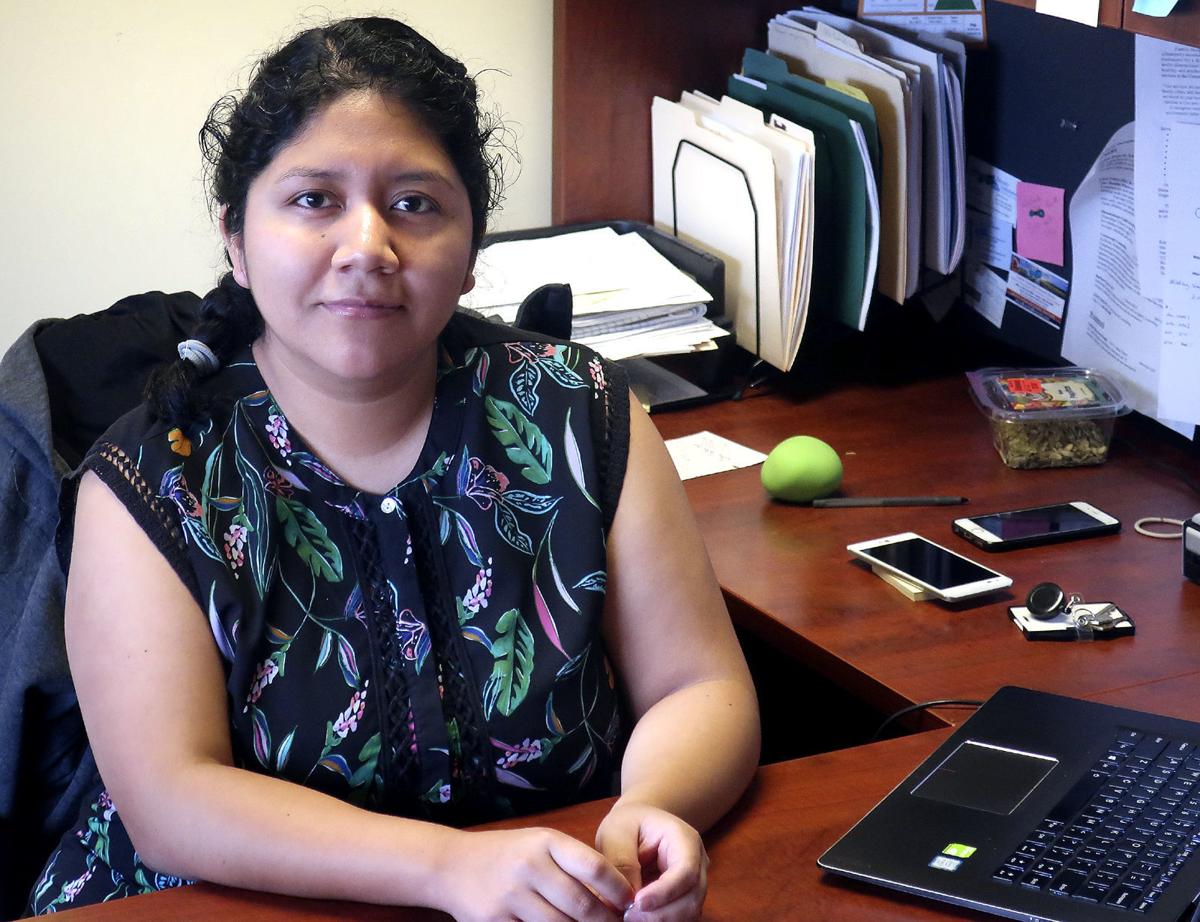 Veronica Salazar Najera Stickley, a Sinclair Health Clinic certified community health worker, discusses the effect of Virginia’s expansion of Medicaid on their patients and the clinic. 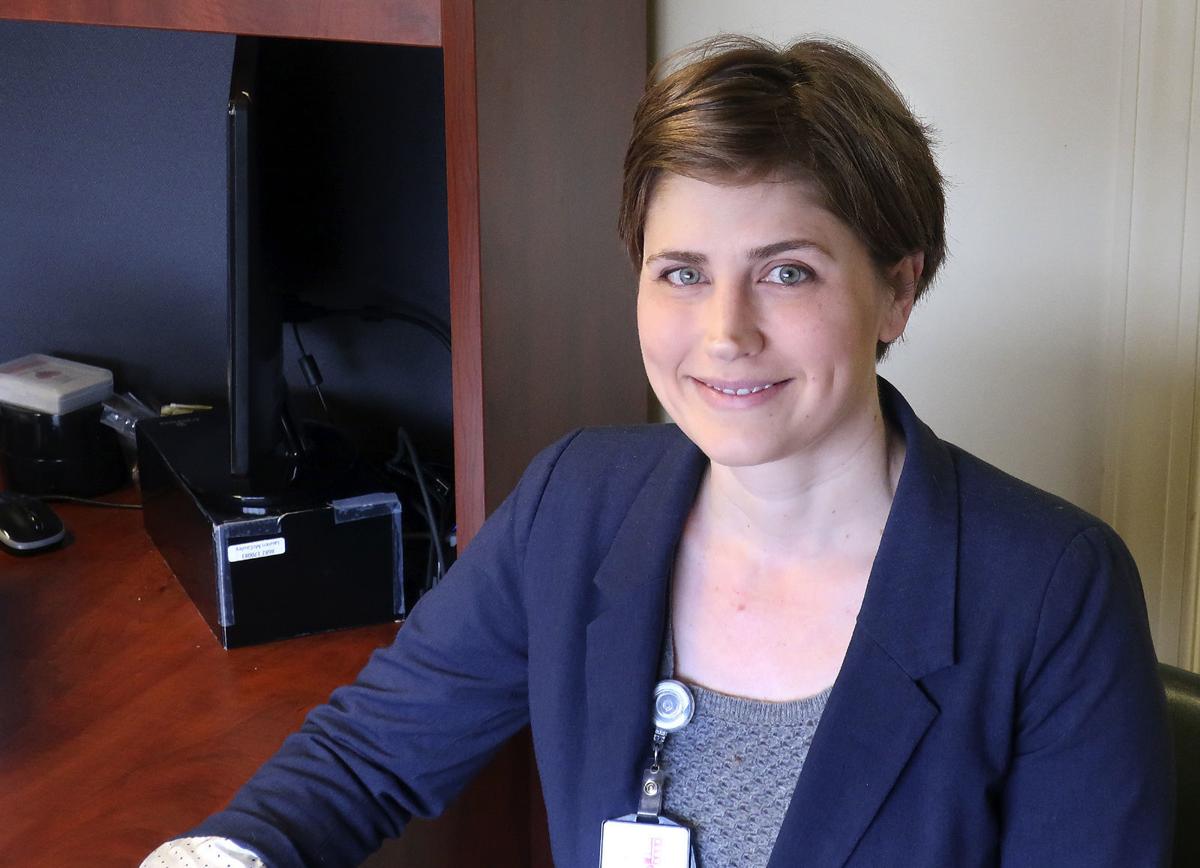 Sinclair Health Clinic Executive Director Katrina McClure discusses the effect of Virginia’s expansion of Medicaid on their patients and the clinic. 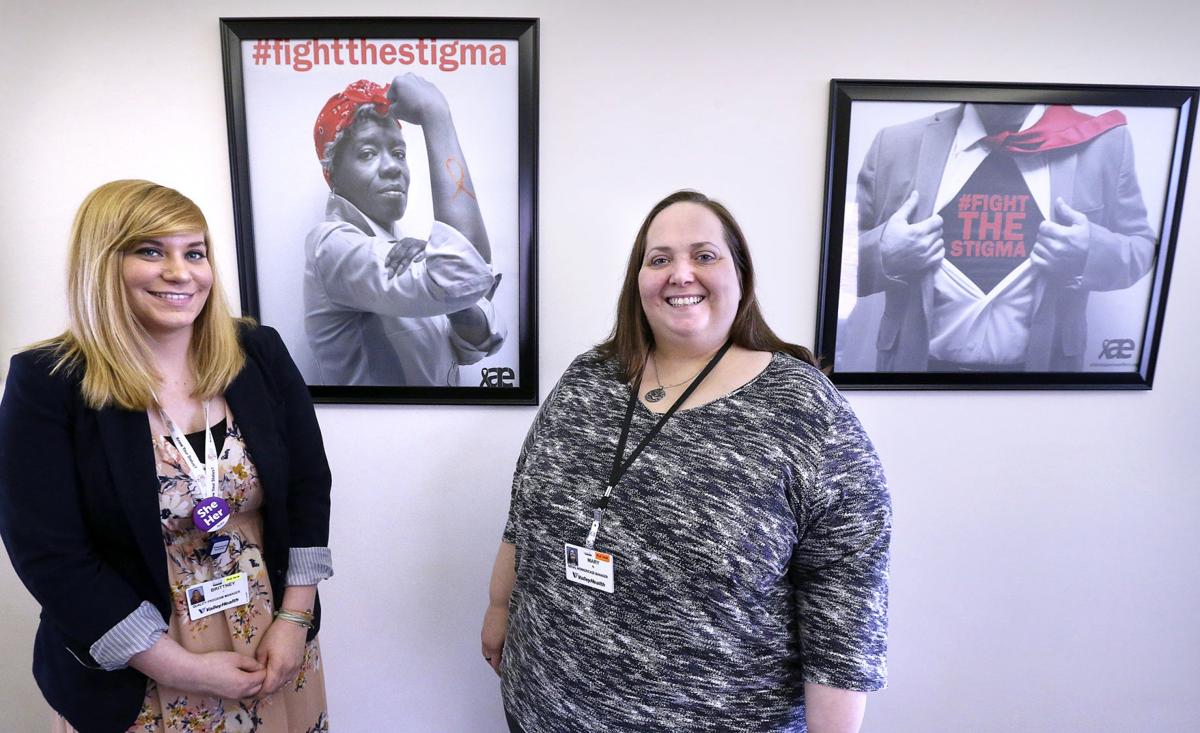 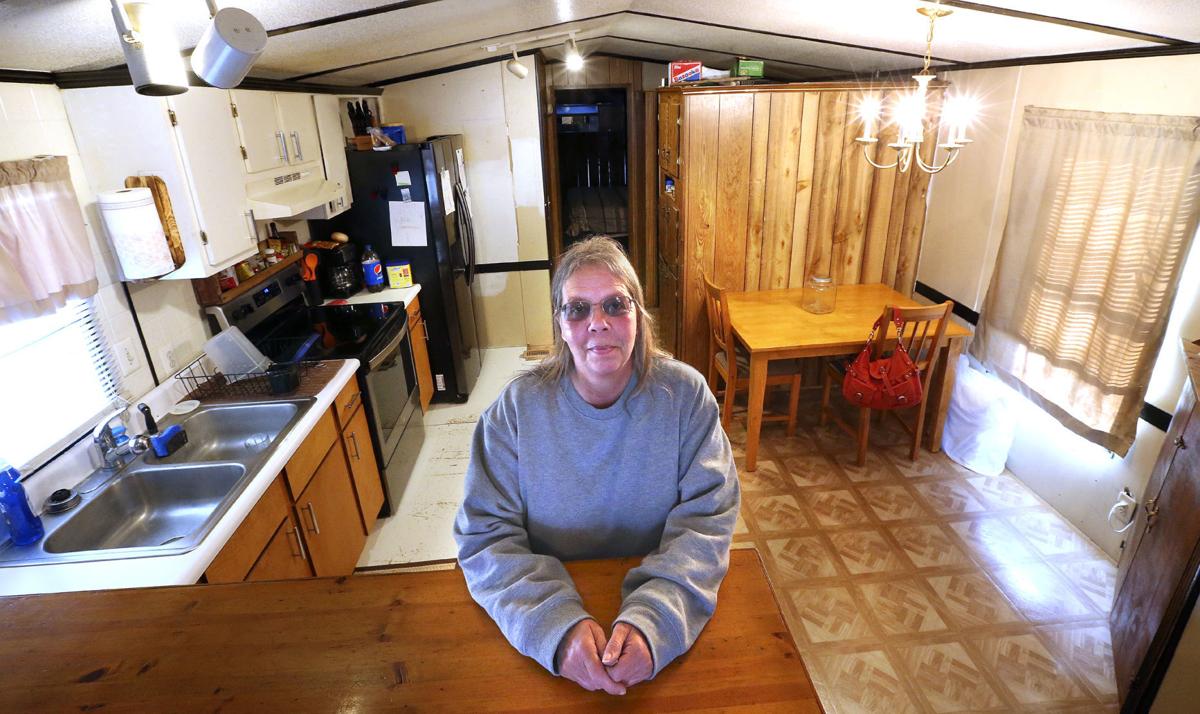 Frederick County resident Charity Ridgeway is among the beneficiaries of Medicaid expansion in Virginia.

Frederick County resident Charity Ridgeway tells how the expansion of Medicaid in Virginia has helped her.

Veronica Salazar Najera Stickley, a Sinclair Health Clinic certified community health worker, discusses the effect of Virginia’s expansion of Medicaid on their patients and the clinic.

Sinclair Health Clinic Executive Director Katrina McClure discusses the effect of Virginia’s expansion of Medicaid on their patients and the clinic.

Frederick County resident Charity Ridgeway is among the beneficiaries of Medicaid expansion in Virginia.

WINCHESTER — Some 394,000 Virginians — including nearly 3,000 in Frederick County, about 1,500 in Winchester and roughly 400 in Clarke County — have gained medical coverage since the state expanded Medicaid in January 2019.

The expansion has taken on greater importance with the outbreak of the coronavirus pandemic. In addition to allowing more infected people to be eligible for treatment, the expansion could cushion an economic tidal wave as thousands of Virginians are expected to lose their jobs and health care coverage due to businesses closing over COVID-19.

Just as people with more traditional infectious illnesses like the flu are more likely to seek treatment if they know their medical bills are paid, the same principle is true for COVID-19. Epidemiological experts want sick people to contact doctors to increase their chances of survival and avoid the disease from spreading.

On March 19, Gov. Ralph Northam announced that Medicaid will cover all coronavirus testing and treatment. Also, Karen Kimsey, director of the state Department of Medical Assistance Services, said her department will do “whatever it takes” to ensure low-income people are covered for coronavirus care.

“We are extremely aware that there are still Virginians who are eligible for coverage but remain uninsured,” she said at a recent news conference. “The most important thing you can do to protect yourself is to get health coverage for yourself and your family.”

Katrina R. McClure, executive director of the Sinclair Health Clinic in Winchester that treats low-income patients, said workers laid off because of the virus have begun coming in for standard medical treatment and to get help with Medicaid enrollment. “It’s kind of neat how the community is pulling together to help everybody out,” she said.

Some local residents had already benefited from Medicaid expansion before the pandemic hit.

Charity Ridgeway of Middletown wasn’t covered by Medicaid when she felt a sharp pain in her chest in May 2017. Even though she thought she was having a heart attack she delayed getting treatment.

“If you don’t have any coverage, you don’t run to the emergency room,” said the 53-year-old Ridgeway, who hadn’t had health insurance since being laid off in 2014. “I just waited until it got to the point where I couldn’t take it anymore.”

Ridgeway eventually went to Warren Memorial Hospital where a doctor confirmed she had a heart attack, and she was rushed to Winchester Medical Center. She ended up with a $79,000 medical bill. Ridgeway said she was hassled by debt collectors in calls, letters and texts until WMC wrote off the debt as part of $38 million in charity care the hospital provided that year.

For years, millions of underemployed or unemployed Virginians like Ridgeway had to rely on going to the emergency room if they got sick unless they could get covered through Obamacare — officially known as the Affordable Care Act.

Many delayed treatment due to fear of medical debt. About 21% of Frederick County residents have medical debt in collection, slightly more than the state rate of 18% and the national rate of 16%, according to the Urban Institute, a nonprofit think tank.

Expanding Medicaid to provide coverage to more people has been a political battle around Virginia and the nation. All states were supposed to expand Medicaid when Obamacare was approved in 2010, but a Supreme Court decision left it up to the states. Thirty-six states, nearly all controlled by Democrats, and the District of Columbia have expanded Medicaid since Obamacare became law in 2010.

Despite federal taxpayers picking up about 90% of the tab, Virginia Republicans blocked the expansion for years citing cost concerns. The expansion didn’t occur until 2018.

The long delays in expansion hurt Ridgeway as her health deteriorated. Because Ridgeway can barely walk and can’t stand for long periods, she can’t work.

Besides her heart disease, she has chronic obstructive pulmonary disease, a lung disease that makes it harder to breathe and she has a spot on her lung that hasn’t been diagnosed yet. In July, Ridgeway broke her neck and needed surgery after falling down a flight of stairs. She also has a narrow spine and needs knee surgery for torn cartilage and has severe numbness in her right arm and hand. “If it’s going to happen, it’s going to happen to me,” she said about her health.

Ridgeway is grateful to Sinclair staff for helping her enroll in Medicaid and providing treatment. Since then, she has been able to get surgery for nerve damage in her neck and pay for expensive prescription pills for pain in her arm and hand. She will soon undergo surgery for a blockage in her left leg. She will also need back and knee surgery.

All of it wouldn’t have been possible without the expansion that Ridgeway said has helped many needy people like her.

At Sinclair, about 30% of the nearly 1,300 patients served last year received coverage through the expansion, according to Veronica Salazar N. Stickley, the clinic’s certified community health worker. Another 725 enrolled in Medicaid with help from clinic staff. Medicaid expansion led to a drop of about 400 patients treated annually at the clinic compared to the nearly 1,700 annual average for the previous three years.

But the clinic has adjusted and remains busy. While it previously served just the uninsured, it is now a hybrid. In addition to Medicaid patients, it serves the “under insured” — people who earn too much to qualify for Medicaid, but can’t afford their healthcare expenses. Some bounce between eligibility and ineligibility as their income increases or decreases such as those who get a bonus or raise, or overtime and then get their hours cut or get laid off.

The clinic now operates on a sliding-scale fee. It serves people making up to 300% of federal poverty guidelines — $38,280 for an individual or $78,600 for a family of four. “The Medicaid expansion is great, but there still will continue to be a need,” Salazar Stickley said.

“The community couldn’t absorb all the patients. You have a brand-new group of patients, but they don’t have anywhere to go,” she said. “So this falls in line with our mission of making sure people have access to quality healthcare.”

McClure said the expansion is reducing the “health poverty trap” in which poor people who aren’t covered get too sick to work and sink deeper into poverty. “If we make care affordable and help them get the care they need before it turns into a crisis, the economy is better off, people are better off and they can take care of their families,” she said.

AIDS Response Effort and its clients have also benefited from the expansion. The group serves about 100 HIV-positive clients annually, according to Britney Jones, ARE assistant director and quality program manager. It also tests an additional 300 people for HIV and Hepatitis C annually and provides housing assistance to about 60 families.

About 75% of clients now qualify for Medicaid, according to Mary Bohacek, ARE medical case manager. Before the expansion, most relied on emergency room care and only went when they got really sick.

“It’s not hyperbole to say people are literally on their deathbeds when it comes to HIV or Hep C sometimes, but with a little bit of prevention and a little bit of care, they’re not a death sentence,” Bohacek said. “By giving these people Medicaid access, we’re controlling the disease and stopping it from transmitting to new patients.”

But the expansion may be rolled back. Ridgeway and local nonprofit health providers said they’re concerned about President Trump’s proposed budget. The proposal, released before the pandemic began, would cut about $844 billion from Medicaid and Obamacare over the next decade including money for the expansion.

Ridgeway said people who oppose Medicaid expansion don’t understand or don’t care that there is a desperate need for healthcare that is being unmet in the U.S. She said the people who need it aren’t deadbeats. Many are the working poor or are mentally ill or too sick to work like Ridgeway and her 52-year-old husband Keith Dawson, who has heart disease. She said Dawson, a former truck driver, has had several heart attacks and hasn’t worked since about 2015.

“If you can work every day and you’re healthy, it’s easy to judge somebody else,” Ridgeway said. “You don’t walk in other people’s shoes. You can only walk in yours. So people are very quick to judge and very quick to put people down.”

An individual or family can earn up to 138% above the federal poverty guidelines to qualify for Medicaid under the Medicaid expansion.

Having access to healthcare is showing itself more and more to be a right and not a privilege. The generation of people who (for one reason or another) went without insurance are now the ones who need it the worst. If routine healthcare had been normalized, we'd see less and less critical issues later on, kind of like keeping up on the oil changes on the car.

Medicare for All is a solution that would serve us better than profitized healthcare. Your health is too important to leave up to the shareholders.

Surprised and happy to see it the STAR. WOW! Why not Medicare for All?

slowe, you are a sick person. Do you enjoy making fun of other people's misery? You had best be careful, because what goes around, comes around.

4-Key Processes to Delivering Success: The Who? What? When? and What Could Happen in a Project