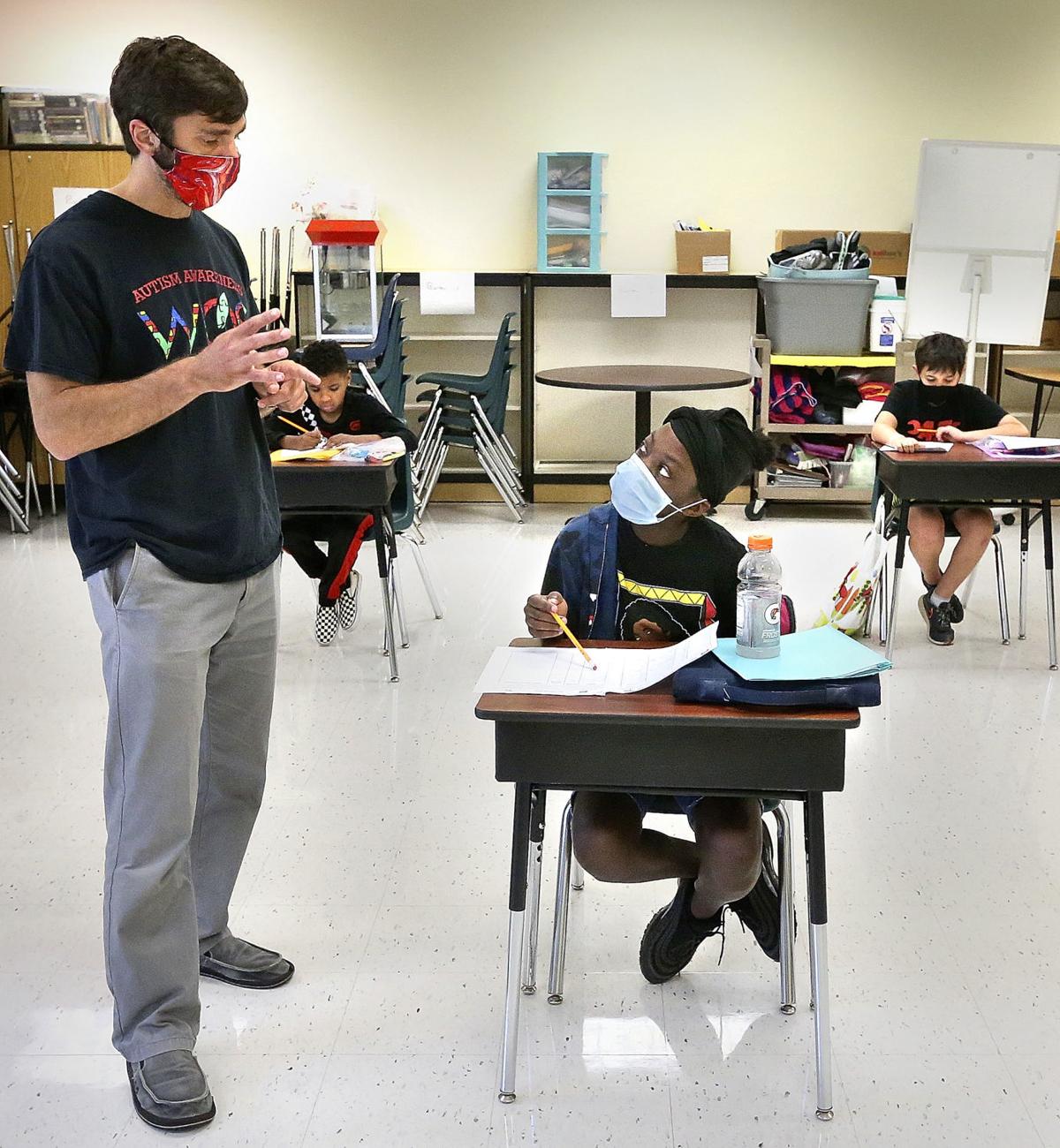 Teacher Scott Bucey talks with Fortune McNabb about square footage during an assignment to design a zoo layout Wednesday during summer school at Daniel Morgan Intermediate School in Winchester. 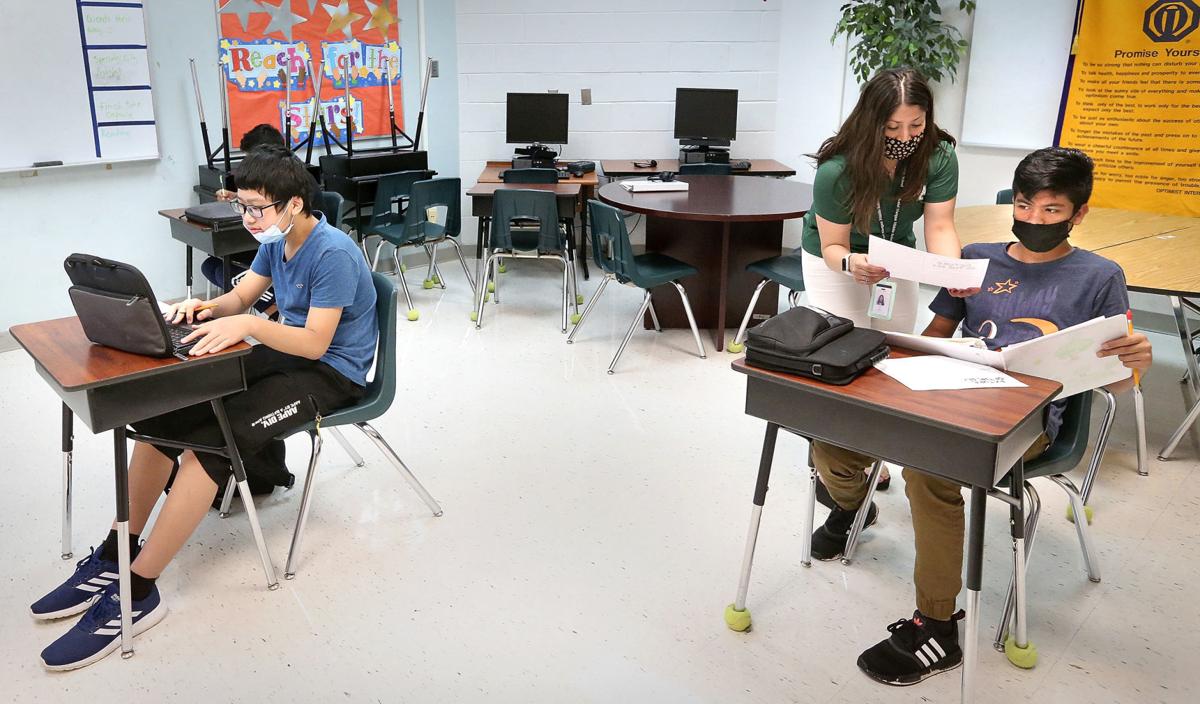 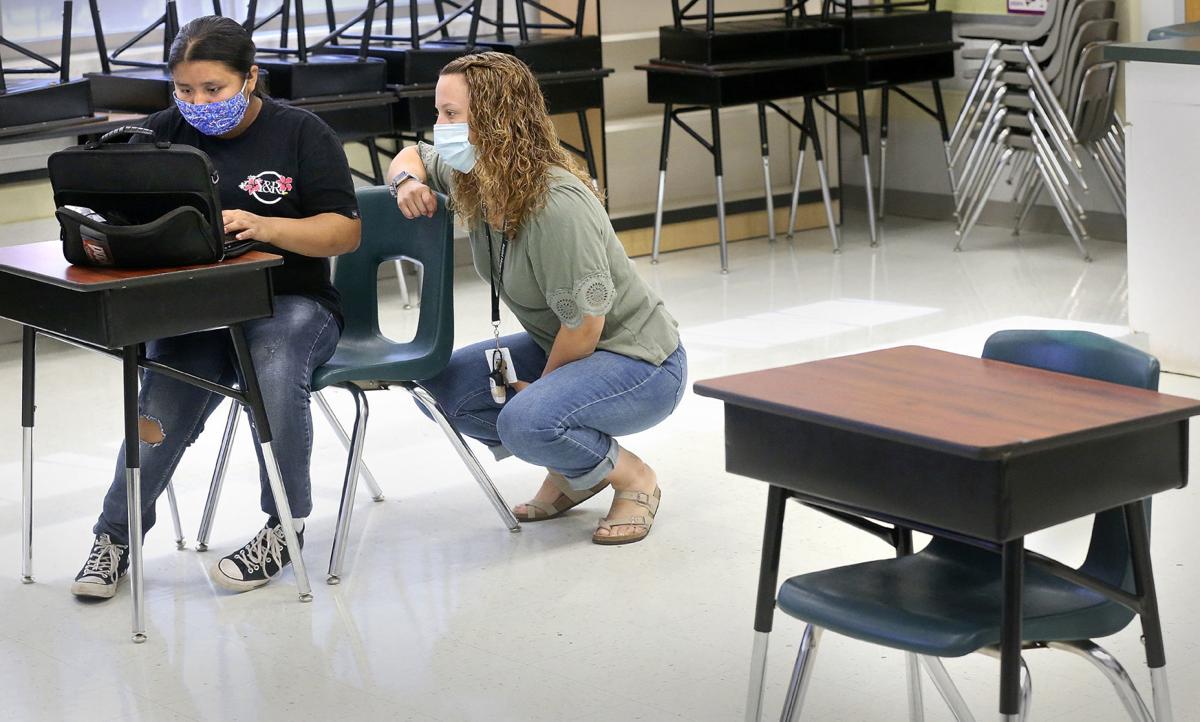 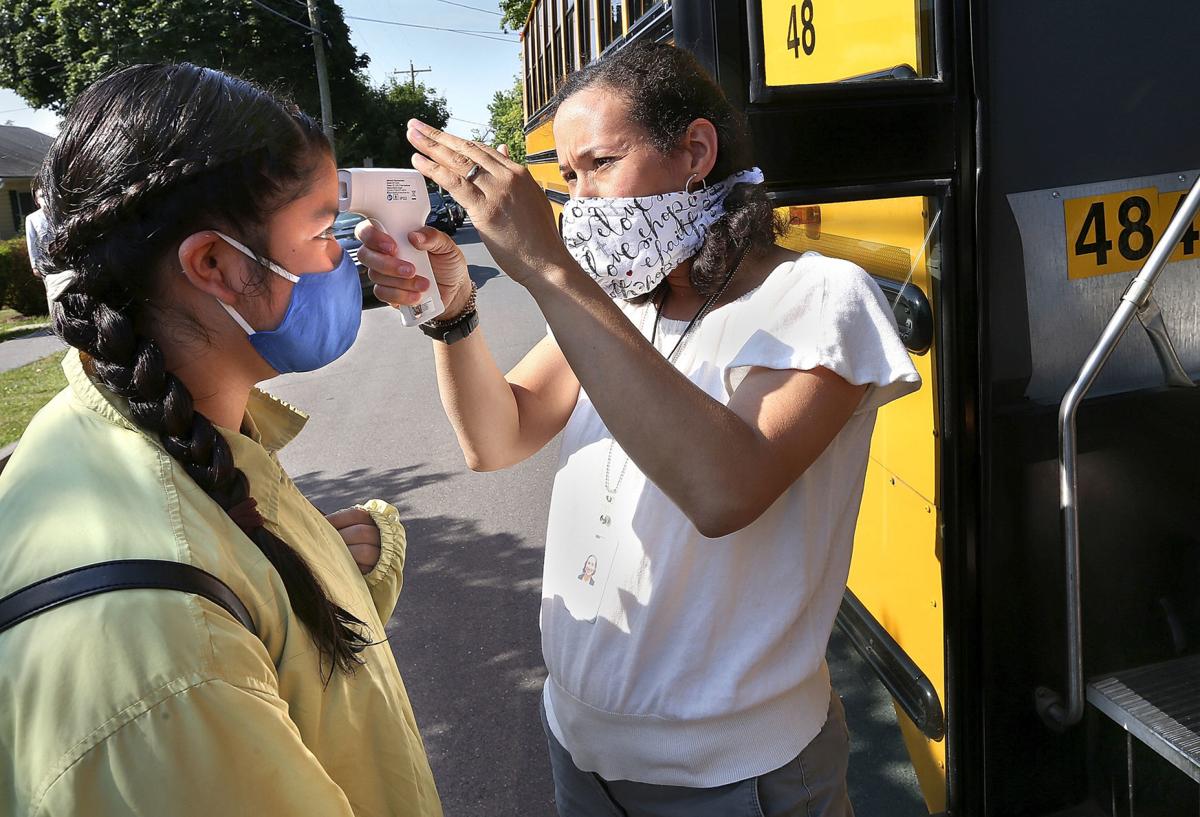 Teacher Scott Bucey talks with Fortune McNabb about square footage during an assignment to design a zoo layout Wednesday during summer school at Daniel Morgan Intermediate School in Winchester.

WINCHESTER — The two-week summer school session that began Monday and ends July 17 is the first in-person instruction Winchester Public Schools has had since mid-March, when the governor ordered K-12 schools across Virginia to close over coronavirus concerns.

Besides helping about 120 students across grade levels with their academics, WPS staff plan to use the summer session as a model for regular classes, which are tentatively set to resume on Aug. 17. Superintendent Jason Van Heukelum said on Wednesday that half of the school division's approximately 4,400 students will attend classes on Monday and Thursday and the other half on Tuesday and Friday. Online education and teacher planning will occur on Wednesdays.

The "50/40" model means school population won't exceed 50%, to allow for social distancing to help prevent the spread of the virus, and students will be in school 40% of the time. They will do schoolwork online at home with Chromebooks provided by the division when not in school.

Parents also have the option to have their children learn exclusively from home under the "distance learning" option. Families have until Wednesday to decide and must commit for at least one semester.

Typically, about 500 students would participate in summer school, but just 200 were invited to allow for social distancing. About 120 are participating, with the others opting out due to parental concerns about the coronavirus. While summer school remains two weeks long and runs from Monday through Thursday, hours have been reduced from 15 to 20 per week to 10.

"We wanted to keep a very small operation," Van Heukelum said. "So we could do it well, do it right and learn for the fall."

Precautions include taking students' temperatures before they board buses and having them follow social distancing guidelines and wear masks.

Classes on Wednesday typically had five or six students seated about six feet apart. Students don't have to wear masks while seated unless the teacher is moving around the room. When moving around the school, students are instructed to wear masks and maintain a six-foot distance. There are no plans for outdoor classrooms to lessen infection risks, although Van Heukelum said teachers have the option of teaching classes outside in good weather.

Safety compliance has been good at Daniel Morgan Intermediate School, which teaches fifth- and sixth-graders, according to Principal Matthew Wygal.

"I just told everybody that things look different in here, but we're all still the same and we're just glad they're here," Wygal said of his message to students on Monday. "You kind of saw them take a breath of relief because it's a bit strange."

Fortune McNabb, who will be entering seventh-grade next month, said she wears a mask when necessary, but it's uncomfortable. While the new rules are a hassle, the 12-year-old said she prefers being in class to studying at home. "It's just hard because you don't have anyone to ask for help," she said.

At Daniel Morgan Middle School, which serves seventh- and eighth-graders, math teacher Millicent Kaczmarzewski said fewer students means more time for one-on-one teaching. But Kaczmarzewski, who was hired in Winchester in 2017 and has been a teacher since 2014, said social distancing limits the curriculum. For instance, team projects, which improve academic skills and socialization, are out right now.

"It's almost like a sanitized summer school where they stay at their desks and the teachers rotate instead of the kids rotating," said Kaczmarzewski, who will be teaching English as a Second Language in the fall. "It is going to be interesting to see what the classroom limitations will be in the fall."

Van Heukelum said the division's coronavirus protocol is based on recommendations from the Centers for Disease Control and Prevention and the Virginia Department of Health. Current CDC guidelines include staff and students wearing masks and keeping desks at least six feet apart "when feasible." They also recommend increasing outdoor circulation in HVAC systems, installing physical barriers like partitions and plexiglass and staggering schedules to reduce interaction.

But Vice President Mike Pence said the guidelines will be changing next week after President Trump on Wednesday criticized them as too strict. Trump also threatened to cut federal funding to school divisions that don't reopen. And Secretary of Education Betsy DeVos has said anything less than a full reopening would be a failure for students and taxpayers.

The CDC revisions may include reducing the distance of desks from six to three feet, which is recommended by the American Academy of Pediatrics. The academy is pushing for schools to reopen.

"Even though this will not be easy, we strongly advocate that all policy considerations for the coming school year should start with this goal in mind," Dr. Sally Goza, academy president, said at a White House summit on safely reopening schools on Tuesday "We all will need to be nimble and flexible and ready to switch gears based on factors such as each community's prevalence of COVID-19 cases."

Reopening proponents note online learning has often been ineffective, particularly for students who lack good internet access. The academy reopening guidelines say "the preponderance of evidence" indicates children and adolescents "may be less likely to become infected and to spread infection" than adults.

But there is conflicting evidence. A study by Germany's Institute of Virology in Berlin looked at nearly 60,000 adults and children infected with COVID-19. It found that while children are often asymptomatic, they may be just as likely to spread the infection as adults.

"Based on these results, we have to caution against an unlimited re-opening of schools and kindergartens in the present situation," wrote study author Professor Christian Drosten. "Children may be as infectious as adults."

A study published in May in the online magazine Science researched Chinese coronavirus patients in Shanghai and Wuhan. "Although proactive school closures cannot interrupt transmission on their own, they can reduce peak incidence by 40 to 60% and delay the epidemic, " the study authors concluded.

New research also suggests that respiratory droplets from infected people can linger in the air for hours in indoor spaces.

Van Heukelum said he's aware of the conflicting messages about reopening schools, and school administrators are in a tough position. Van Heukelum — who was hired in Winchester in 2016 and began his education career in 1997 — said dealing with the pandemic has been the biggest challenge of his career.

"There are no good choices, and you're dealing with safety and health. The consequences of bad decision-making are really high," said. "The pressure to reopen for childcare and economical reasons has to be secondary to health and safety."

While safety is a priority, Van Heukelum acknowledged online learning is no substitute for in-person education. He said younger and poorer students have been hit hardest by the closures, which is widening the education inequality gap.

"I just told everybody that things look different in here, but we're all still the same and we're just glad they're here. You kind of saw them take a breath of relief because it's a bit strange."