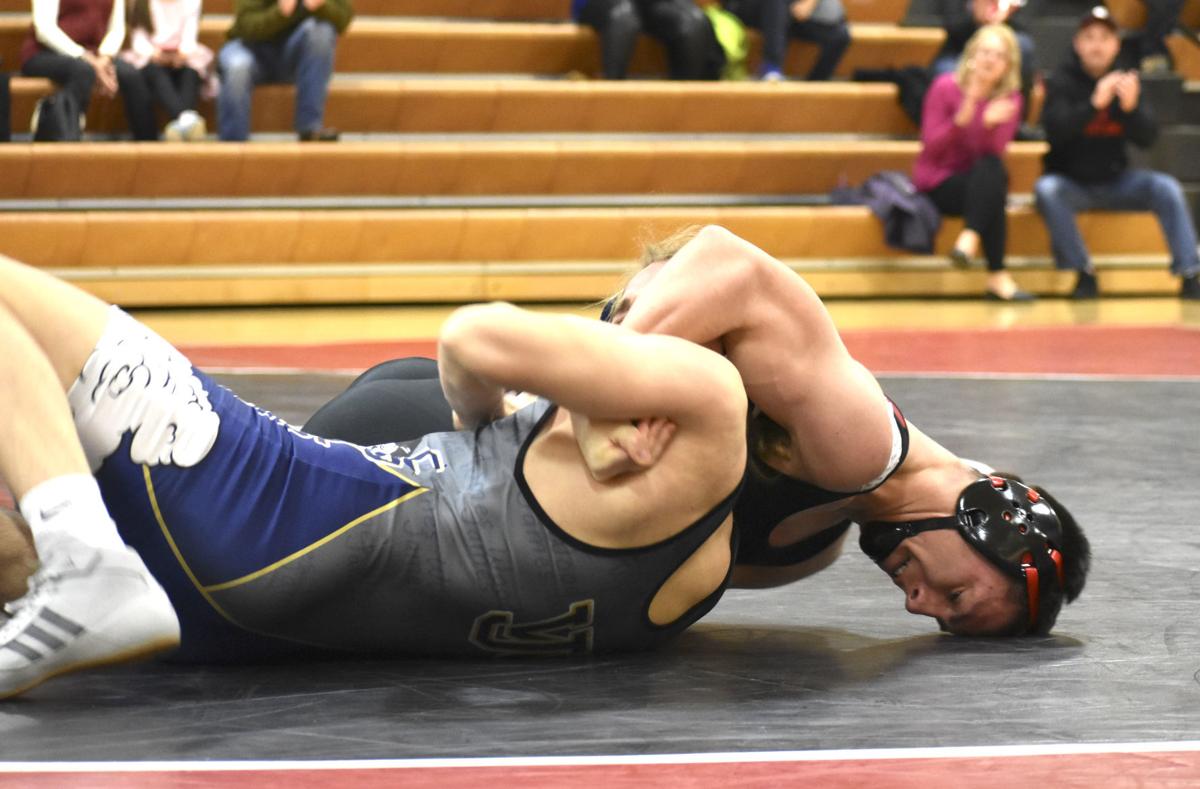 Sherando’s Colton Foltz is in the process of turning James Wood’s Paul Ebersole in the 182-pound match of Wednesday’s Class 4 Northwestern District dual at Sherando. Foltz recorded the second of the Warriors’ four straight pins as Sherando rallied for a 44-27 win. Foltz’s match took one minute and 38 seconds. 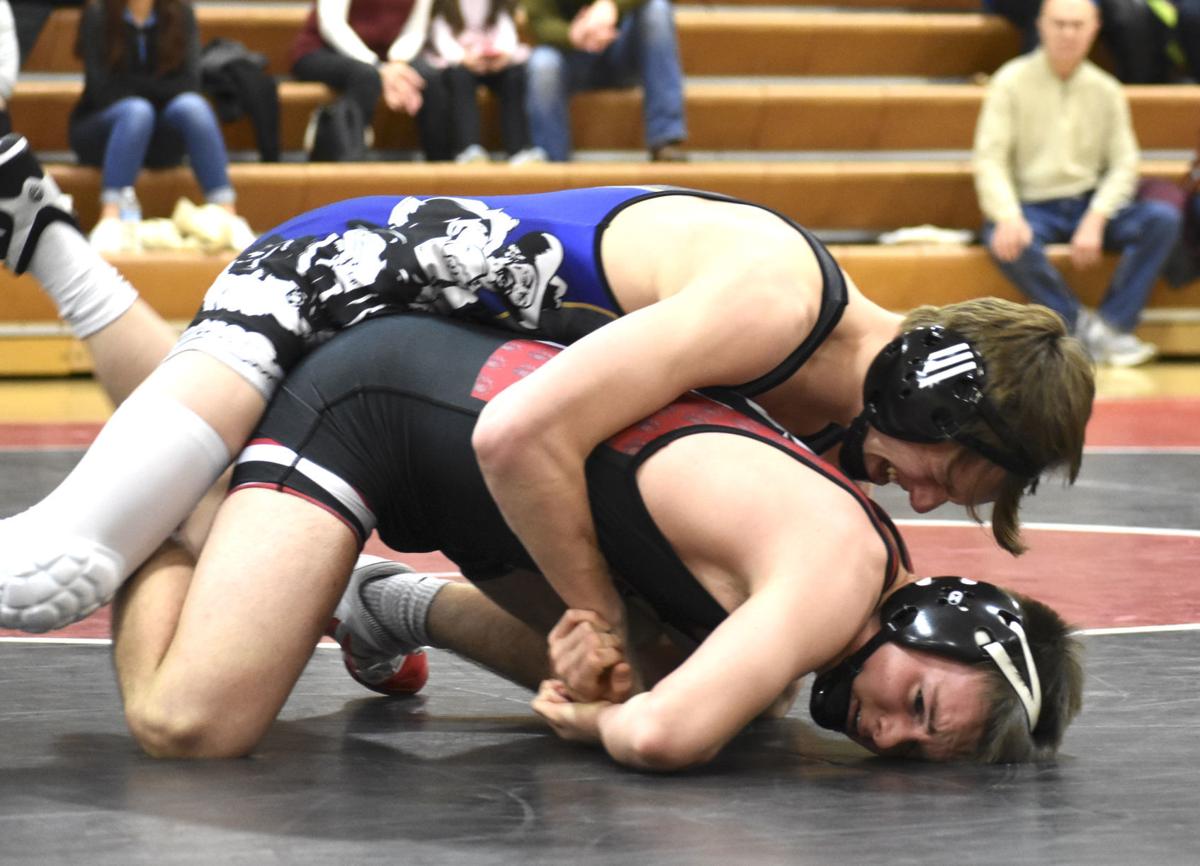 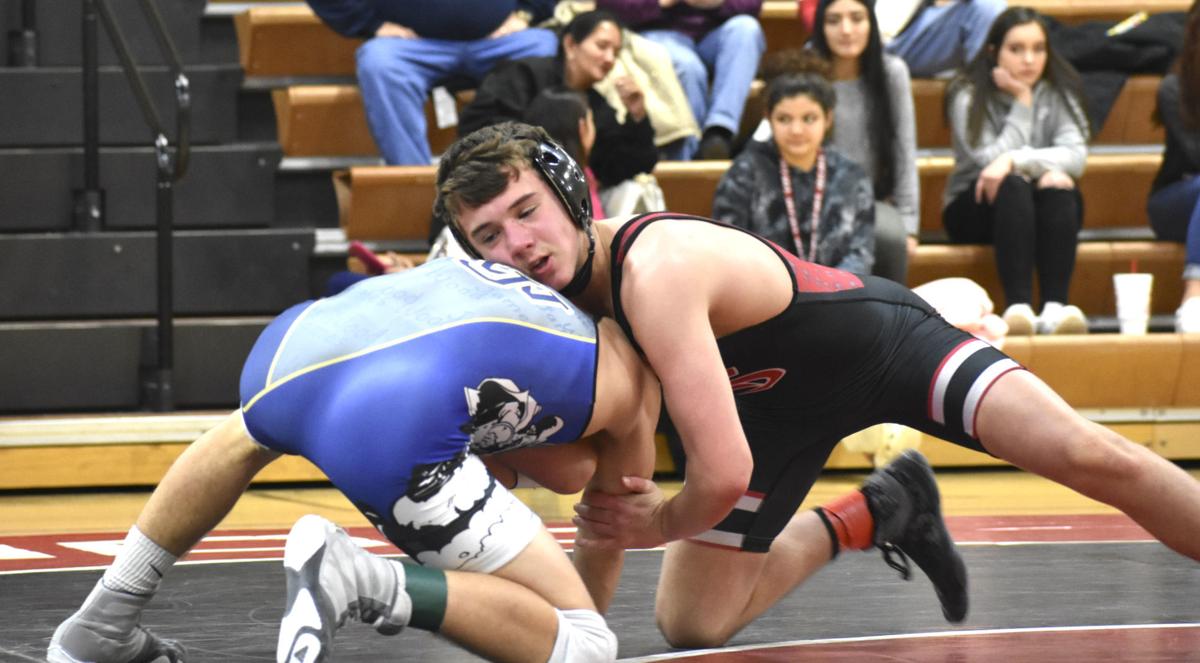 Sherando’s Colton Foltz is in the process of turning James Wood’s Paul Ebersole in the 182-pound match of Wednesday’s Class 4 Northwestern District dual at Sherando. Foltz recorded the second of the Warriors’ four straight pins as Sherando rallied for a 44-27 win. Foltz’s match took one minute and 38 seconds.

STEPHENS CITY — Sherando senior 182-pounder Colton Foltz said, “I don’t know if I could live with myself,” if the Warriors didn’t win the last home dual match of his career.

Foltz got to say that with a laugh, because he played a big part in making that happen Wednesday on senior night.

One of just three seniors in Sherando’s starting lineup, Foltz’s pin was the second of four straight falls for the Warriors as they rallied from a 12-point deficit to take a 12-point lead.

Sherando went on to defeat James Wood 44-27 to complete a season sweep of the Winchester-Frederick County schools and improve to 16-3 overall and 4-1 in Class 4 Northwestern District duals.

Sherando coach Brian Kibler was a little unsure of his team’s chances at that point. With Sherando forfeiting at 285 pounds because of an illness to Keith Gouveia and James Wood forfeiting at 113, making up a 12-point deficit over nine matches was no sure thing.

“I wouldn’t say there was no panic,” Kibler said. “We needed something to break the streak there. They’ve got pretty good wrestlers from 126 to 160, and I told [assistant coach] Jim [Straight], ‘If we can come out there not giving up pins, I feel pretty good about the whole thing from here on out.’

Sherando didn’t waste much time in turning the match on its head. The Warriors pinned three Colonels in a row in the first period before finishing off the run with a second-period pin to make it 30-18 Warriors. Sherando wound up winning six of the seven contested matches after the Colonels jumped out to their 18-6 lead.

Aaron Metz got it started at 170, getting a takedown 45 seconds in. He wound up pinning James Wood’s Caleb Keefer in 1:36. Naturally, Foltz was happy to see it.

“I definitely like it when the match before me ends relatively fast,” Foltz said. “After a match like that, I’m usually ready to rock and roll and am pumped up. I’m ready to go to work.”

About 90 seconds into the 182-pound match between Foltz (19-9 record) and James Wood’s Paul Ebersole (13-6), Ebersole went for a low shot that turned out disastrously for him when he couldn’t secure any part of Foltz’s body. Foltz pounced and controlled Ebersole’s right arm while lying on top of him, then he circled him toward Ebersole’s left until he secured both of his arms and put him flat on his back. The ref slammed his hand down at the 1:37 mark to prompt another Sherando celebration.

“I never sort of roll and look for the pin off of somebody else’s shot,” Foltz said. “Usually I’m the one taking the shots. I felt a little more pressure [on my body] than I expected to. When I was on my hip going toward my back, I just lifted my leg up, turned him over, got his arms and pinned him.”

Kibler said he was impressed by Foltz’s ability to react so quickly in a scramble situation.

“To be honest, that’s something that’s probably been a weakness of his throughout his career,” Kibler said. “But he wrestled through that situation and came out on top of it. A good thing happened to him by him keeping on wrestling.

“After that, Saxton [Garver] goes out and gets a pin, and the train’s rolling. Momentum in a dual can be huge, and our guys kept feeding off each other as they kept coming out on the mat after Metz.”

James Wood coach Cory Crenshaw said the 182-pound match was one of the key ones in determining the outcome.

“We’re in a shot and we’re finishing a shot, but we make a slight error and we’re on our back and getting pinned,” Crenshaw said. “So you take away six [points from Sherando] and maybe give us three or give us six, we’re right in this match.”

The Warriors are coming off a 25.5-point win at their own 10-team Andrew Kenney Memorial Tournament on Friday. Foltz said the team is continuously getting better.

“The coaches really help us out,” he said. “They watch our matches, tell us what we’re doing wrong and help us with our individual needs.

“Our practices have gotten shorter because our effort has gone way up and our technique has gotten better. Everything’s looking cleaner and sharper and everyone’s trying really hard.”

Crenshaw believes Sherando can be a strong contender when the district tournament takes place on Feb. 8. Kibler said the Warriors aren’t going to rest on success, though.

“Obviously, the more you win, the better you feel about things,” Kibler said. “We’re starting to turn it on and feel good about where we’re at at the right time of the year. There’s improvements to be made, but we’re starting to go the right way.”

Crenshaw told his wrestlers that he felt his team was closer to Sherando than the final score indicated.

“It’s little things right now,” Crenshaw said. “We’ve got some detail work that needs to be worked on and adjusted. We’ve got two weeks, and then we’re in districts. We’re going to see what happens for those two weeks.

“The guys that I’m hoping can make states, they’re progressing. When they make errors, they’re asking about their errors and working to get better. That’s what we need to keep doing.”

One of the wrestlers the Colonels can feel particularly good about right now is Chris Nuss. The junior improved to 21-1 and got James Wood on the scoreboard with a pin in 1:26 at 138 pounds over Sherando’s Brandon Blair.

“I think I’m just putting everything together this year,” Nuss said. “In my matches, I’m thinking [several moves ahead]. I just go out there and think ‘I’m going to beat this guy up,’ every time.

“At the beginning of the season [at the Warren County Duals] I beat a guy by tech fall that I had beat by one point the previous time I faced him. That showed how much improvement I had made and really gave me motivation. I’m so much better than I was last year.”

“I think the big thing for Chris is just his tenacity and work ethic,” Crenshaw said. “He stays in the room and pushes hard. He’s been putting in the work in the offseason.”