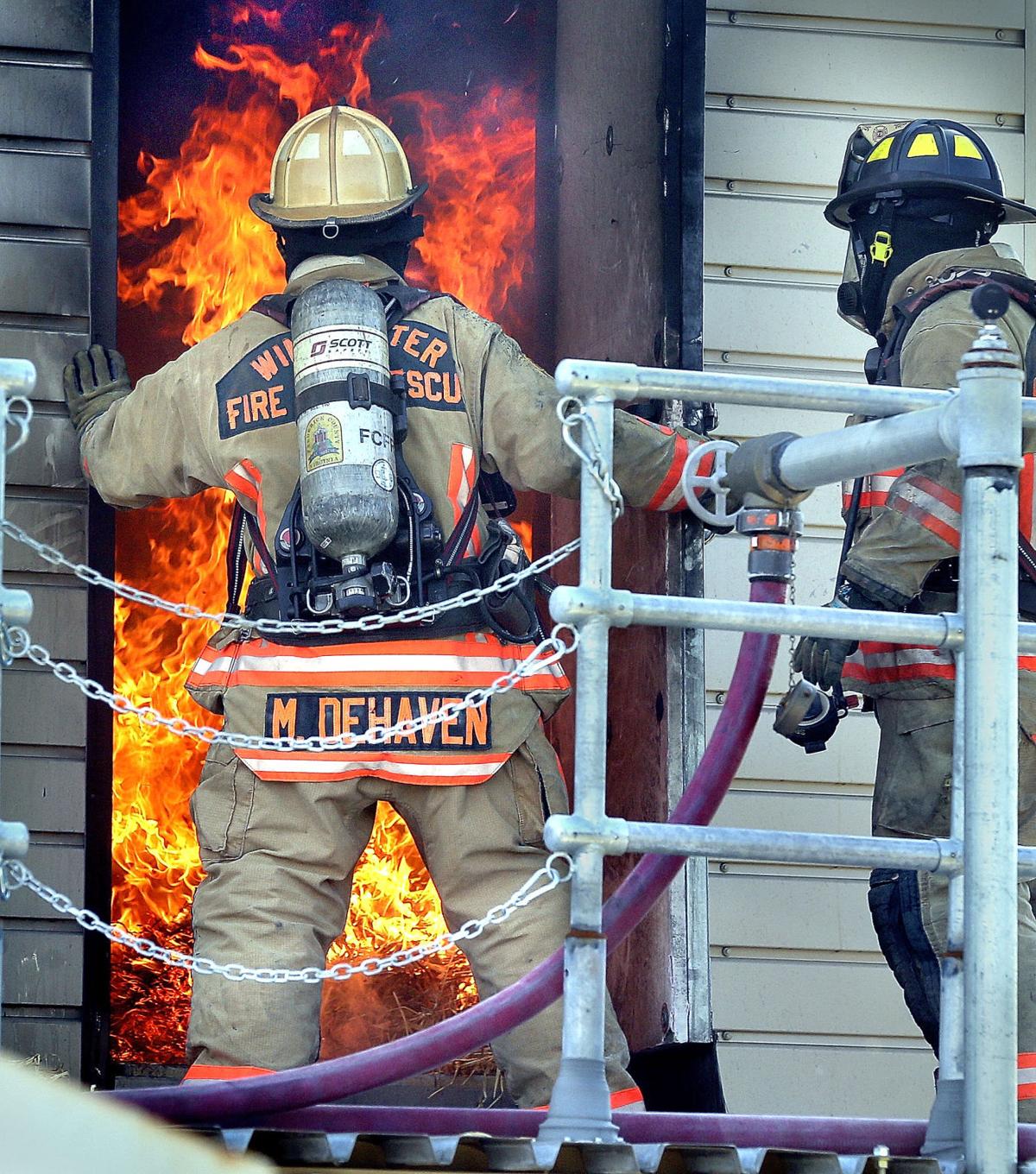 Winchester Fire and Rescue Battalion Chief Matt DeHaven looks in on the fire he is controlling from the second story of the new burn building during training exercises at the Winchester Regional Fire Training Center on Woodstock Lane in Winchester on Thursday. 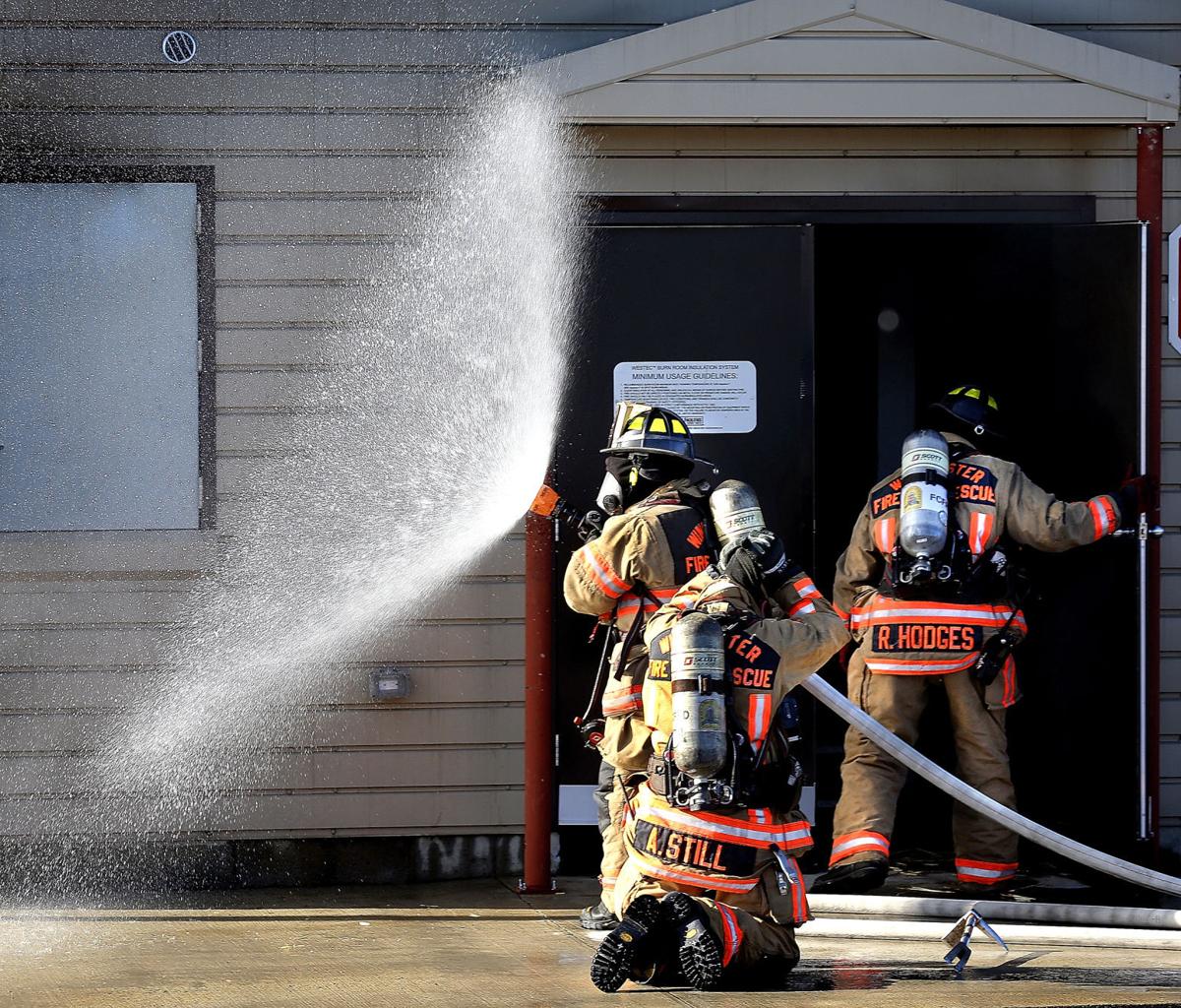 A Winchester firefighter gives a quick blast of water as a test before entering the new burn building structure that was set ablaze for training Thursday at the Winchester Regional Fire Training Center on Woodstock Lane in Winchester. 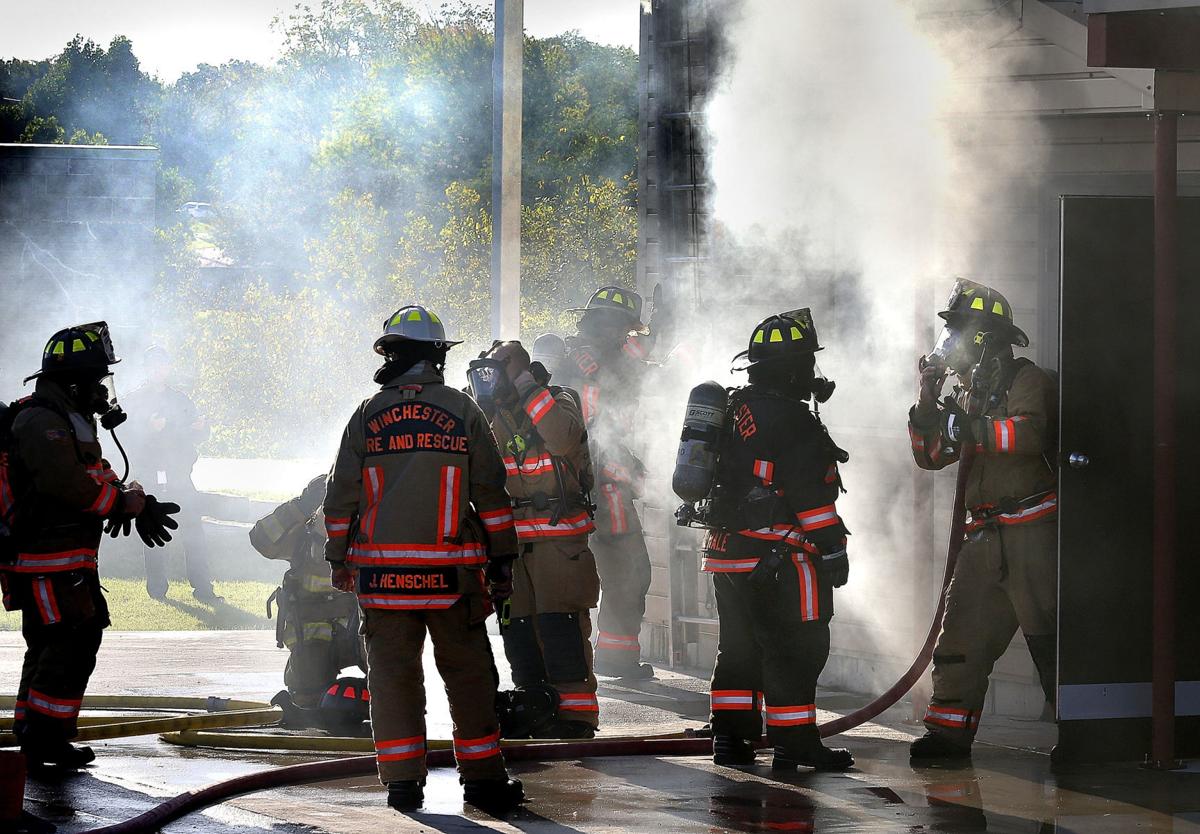 Winchester Fire and Rescue Battalion Chief Matt DeHaven looks in on the fire he is controlling from the second story of the new burn building during training exercises at the Winchester Regional Fire Training Center on Woodstock Lane in Winchester on Thursday.

A Winchester firefighter gives a quick blast of water as a test before entering the new burn building structure that was set ablaze for training Thursday at the Winchester Regional Fire Training Center on Woodstock Lane in Winchester.

WINCHESTER — Flames could be seen inside the building at 1716 Woodstock Lane and smoke was billowing out of it at 9:10 a.m. Thursday, but the firefighters outside weren’t trying to extinguish the fire. They had just set it.

Fires are a bad time for on-the-job training, so the annual controlled burns by the Winchester Fire and Rescue Department were a way to safely train firefighters. Training included assessing the fire upon arrival, coordinating communication between firefighters and the incident commander and practicing search and rescue tactics. The controlled burns also help firefighters familiarize themselves with equipment and work with each other in hot, smoky conditions where visibility is low and the temperature is as high as 1,200 degrees.

“Every single thing we’re doing here is a training opportunity because here’s the place to figure out if you have anything that you need to tune up,” interim Fire Chief C. Hadden Culp said. “It’s OK to make a mistake. The whole intent is fine-tuning.”

Few calls to the department actually involve fires. Of the 6,189 calls last year, 60 or about 4%, involved structure fires. So experience fighting actual fires is limited. While there is no substitute for the real thing, trainers made the three controlled burns — officially known by the department as “training fires” — as realistic as possible.

Winchester firefighters arrive at most fires in six minutes or less, and firefighters arrived at the second controlled burn at 9:13 a.m., three minutes after it was called in. Within a minute of arriving, probationary firefighter Damien Hale and Lt. Blaine Johnson were smashing down a simulated door with an axe and a Halligan bar, also known as a Halligan tool, a metal, 30-inch-long forced-entry device. While they worked the door, a colleague walked around the two-floor, 2,000-square foot building to assess the fire.

The fire was set with hay bales and wooden pallets to limit the amount of carcinogens in the air. Within three minutes of arrival, the simulated door was broken, water hoses had been unrolled and ladders were being raised to the second floor where the fire was coming from. Mannequins serving as victims were rescued by firefighters.

After the fires were extinguished, firefighters had their blood pressure taken at a nearby tent. Heart-related deaths accounted for 44% of on-duty firefighter deaths nationally between 2009 and 2018, according to the National Fire Protection Association.

Among those training on Thursday was Nick Walls, a member of the Friendship Volunteer Fire and Rescue Co. since 2018. He said practice improves communication.

“Most of the mess ups are because of a lack of communication,” he said. “So getting the communication down is most helpful.”

The burns will be critiqued by commanders to improve tactics. Training also helps the department meet annual standards required by the National Fire Protection Association and the federal Occupational, Safety and Health Administration.

Eight burns have been done at the building since the $1 million regional fire and EMS training center opened a year ago. The facility, which also includes a tower for climbing exercises and a classroom, is shared by Winchester and the Frederick County Fire and Rescue Department.

Dispatchers from Winchester’s Emergency Communications Center were also at the scene communicating with firefighters by radio from a nearby table. Culp, a Prince William County firefighter from 1978 to 2011, said dispatchers are crucial for relaying accurate information to firefighters, such as where the fire began in a structure and whether anyone is trapped inside. They’re also responsible for dispatching additional units if necessary.

“They gather information for us from an excited, scared or injured person in a calm way. They have to extrapolate that information from a person who is maybe having the worst day of their life,” said Culp, who took over in Winchester on June 1. “They are truly unsung heroes.”