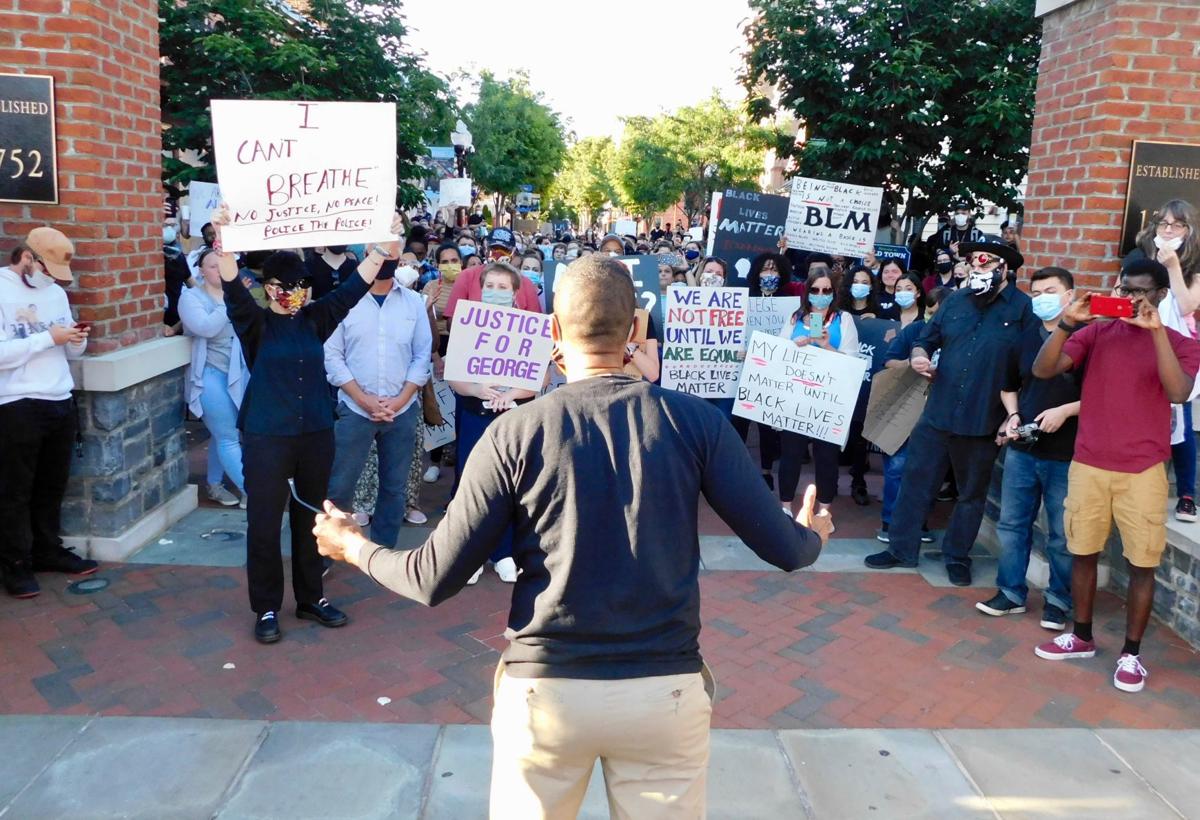 Samuel Tanner, of Winchester, addresses hundreds of people who converged on the Loudoun Street Mall to protest the death of George Floyd. 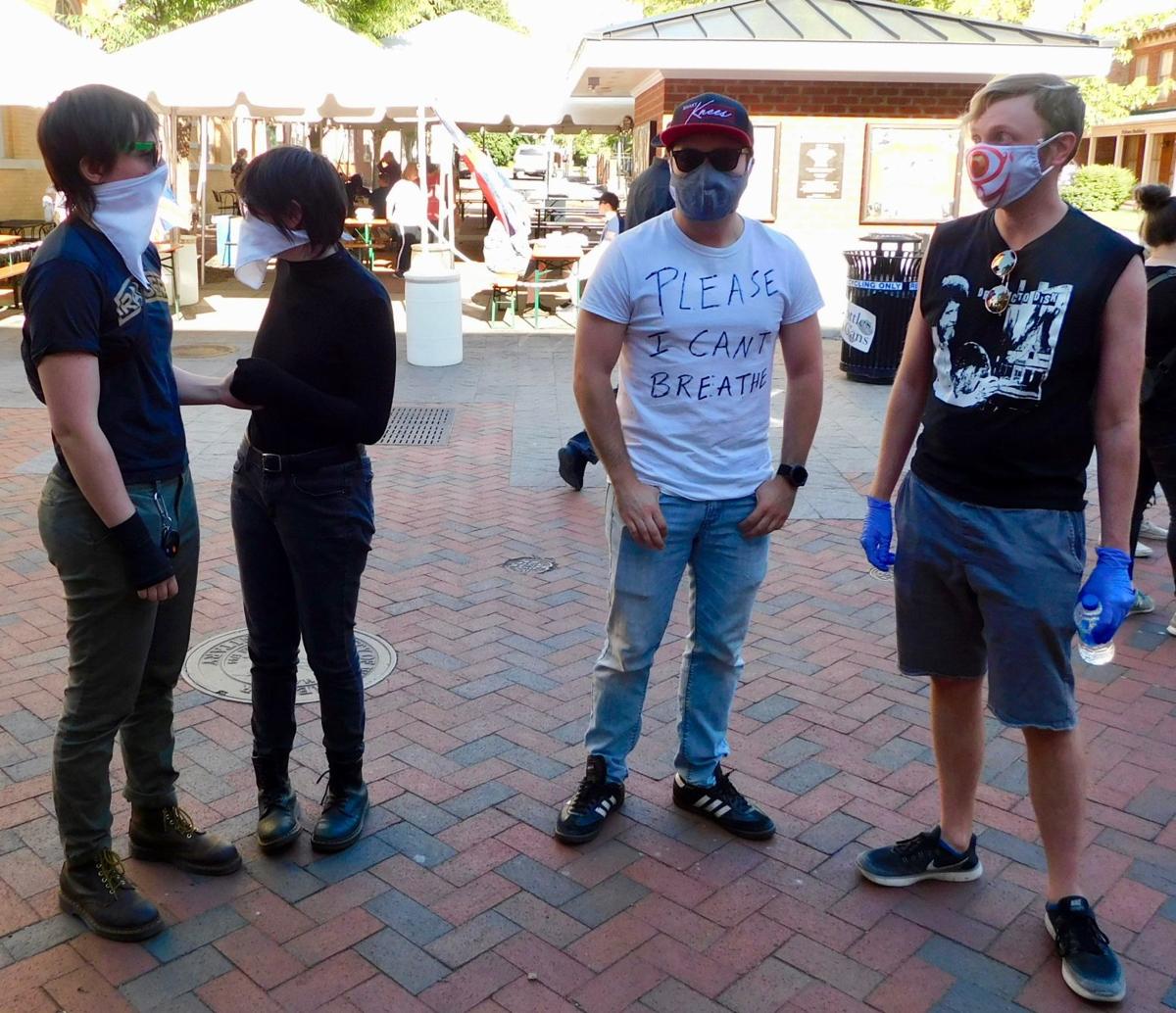 A group of protesters, who asked that their names not be disclosed, gather on the Loudoun Street Mall on Sunday evening to protest the death of George Floyd, who died last week while in police custody. 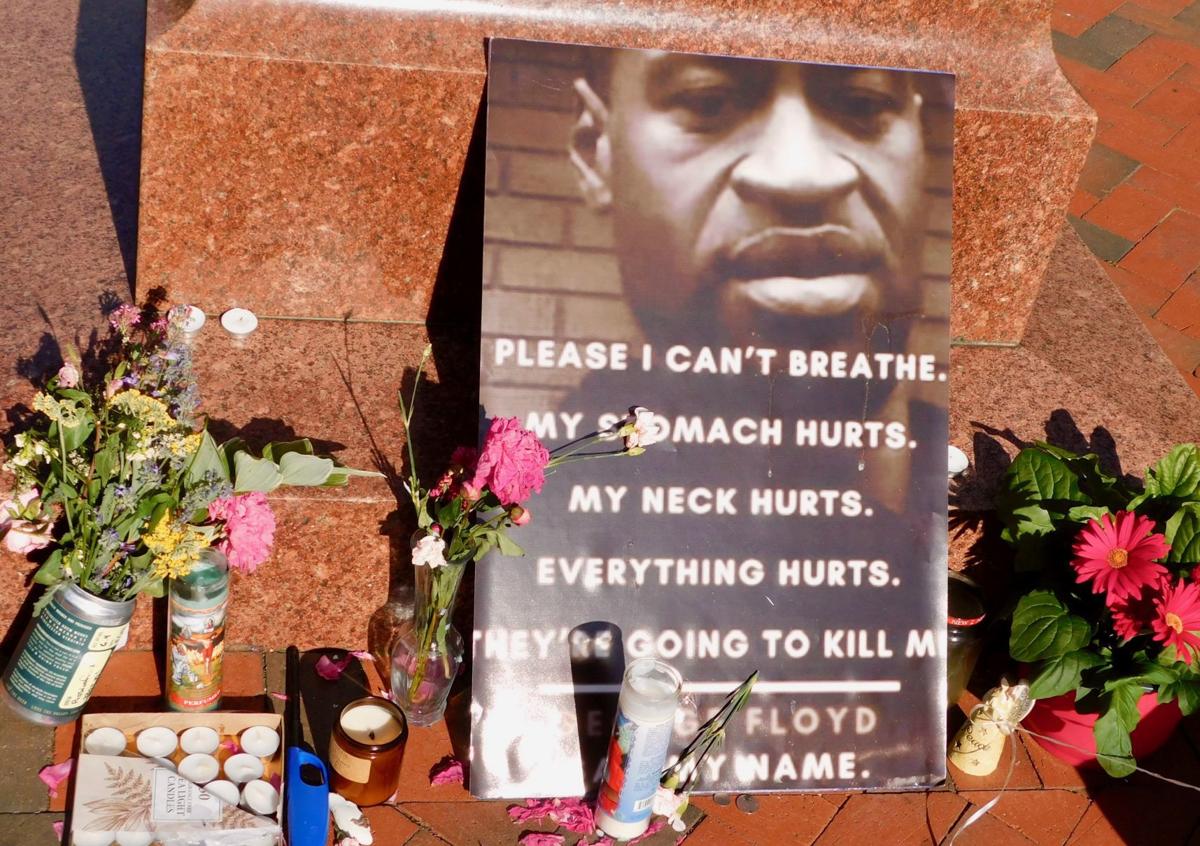 A memorial to George Floyd, who died last week while in police custody in Minneapolis, is seen Sunday at the base of a Confederate monument in front of the Shenandoah Valley Civil War Museum on the Loudoun Street Mall. People protesting the circumstances that led to Floyd’s death gathered downtown Sunday.

Samuel Tanner, of Winchester, addresses hundreds of people who converged on the Loudoun Street Mall to protest the death of George Floyd.

A group of protesters, who asked that their names not be disclosed, gather on the Loudoun Street Mall on Sunday evening to protest the death of George Floyd, who died last week while in police custody.

A memorial to George Floyd, who died last week while in police custody in Minneapolis, is seen Sunday at the base of a Confederate monument in front of the Shenandoah Valley Civil War Museum on the Loudoun Street Mall. People protesting the circumstances that led to Floyd’s death gathered downtown Sunday.

The chant was repeated over and over Sunday night in downtown Winchester, where hundreds of people assembled to protest the May 25 death of George Floyd in Minneapolis.

Floyd, a 46-year-old black man, died while in police custody. Floyd was handcuffed and lying on the street while a white Minneapolis police officer, Derek Chauvin, pressed his knee to his neck for nearly nine minutes. Chauvin, who reportedly ignored Floyd’s pleas of “I can’t breathe,” has been charged with murder.

“This has to be the beginning of a new era,” Samuel Tanner, of Winchester, told as many as 500 people who met on the south end of the Loudoun Street Mall to protest Floyd’s death. “It needs to be said. People need to hear it.”

Chants of “I can’t breathe” continued for nearly as long as Floyd was pinned to the ground. Protesters, including white, black, Hispanic and Asian people, also chanted “I want justice” and “George Floyd.”

As of 7:30 p.m., with the protestors marching around the downtown area, police reported no incidents of violence.

Winchester Police Chief John E. Piper said protest organizers did not obtain a permit from the city, but there are stipulations for spontaneous protests in City Code, so he decided to allow the event to proceed.

Members of the Winchester Police Department and Winchester Sheriff’s Office kept a low profile and allowed the protestors to march, speak and wave signs. Prior to the event, an agent with the U.S. Bureau of Alcohol, Tobacco and Firearms led a bomb-sniffing dog across the grounds of the Shenandoah Valley Civil War Museum, where participants initially assembled.

For more on this story, see Tuesday’s edition of The Winchester Star.

Once again, the same thing two days in a row.

Our nation has a long, long way to go before we can even think about becoming great. The offenses against the people by King George that lead to the bloody and violent overthrow of the sitting government were actually nothing compared to the current oppression of the average citizen and the destruction of democratic institutions. The patriots replaced the government and the obnoxious people of the time that went: but, but, but, left and went to Canada or Mexico where they could still worship the evil George.

I’m pleased to see that so many people have empathy. We may have finally reached the point that Benjamin Franklin was talking about when he said, “Justice will not be served until those who are unaffected are as outraged as those who are.”

So does this mean that the Covid19 is over and people can again safely gather in numbers larger than 10? Sure was a quick overnight change. Well, I'll continue to stay home, social distance, and wear a mask if I must venture out to the grocery store.

Well I’m glad the police chief let this happen without a permit. I also hope he heard what people say. I have been harassed and abuse by local police all my life. It’s time they learn they can’t be bullies.

The first amendment is their permit. A competent police chief would know this.

Technically, you are correct. Practically, however, since this qualified as a spontaneous demonstration (less than 48 hours notice), no permits were required. Chief Piper was made aware and he made sure accommodations and security was provided.

They know this, but why not make a little money for the state at the same time?? That's how they think!

Not exactly. Good try, though.

GIven the fact that our firefighters are understaffed and pretty much leaderless at this point, we are so lucky that Winchester was safe from the hellscape that other communities across the country encountered. Leadership in this town needs to get it together to retain the staff they spend so many tax dollars on executive searches to hire. Because it is chaotic out there, the news is frankly scary and we are not prepared on the public safety front in Winchester. Shame on the mayor to let it get to this point.

Didn't the governor ban large gatherings of people? Was there an exemption for protesting?

It was a good, peaceful protest, devoid of the violent rhetoric we've been seeing on TV. Great question about the gatherings though -- I'm sure if it was a religious service the regular ninnies on here would be quick to complain.

If this large gathering was for a religious service, the usual knucklehead lefties that post here would be writing something about Darwin and "thinning the herd".

The large crowds are not a smart idea and if people didn’t wear masks, then they may thin the herd. We will find out in two weeks 🤷🏻‍♂️ I have no problem with churches meeting outside, in fact outside worship is one of the most beautiful things I’ve ever experienced. This is what you get when you put a racist in the White House. We are very lucky they didn’t burn Old Town to the ground.

If the religious right had a backbone they’d still be in their churches. It won’t be much longer until our freedom of religion is whittled away like our 2nd.

You are doing well in displaying your racist colors and total disdain for the concept of democracy. The decent people in the USA have finally grown weary of bigoted cowardly toxins that prevent our nation from becoming great. Equality under the law needs to happen even it it means bringing back the draft with very low standards to get the toxic people onto a distant military base under the control of the UCMJ.

TonyR doesn't know that we're a republic, not a democracy. TonyR seems to believe that anyone that disagrees with him is a bigot and should be rounded up ("drafted" -- cute choice of word) and put on a military base. TonyR is more of an intolerant wannabe tyrant than he pretends to be "resisting". Don't be TonyR!

@ Bernie Mac - Remember it's only the law if you are of a conservative/libertarian leaning. Double standards and all that...

Bernie Mac, I thought that too, in the article the police said that the protest was peaceful so they decided to let it go. I am proud of Winchester for the voices that spoke out in a peaceful way and a community that was not overrun by outside rioters creating chaos. I was worried this weekend. This morning I am proud of our little town!!

That's because the ones that are doing the looting and the burning are being paid to do it. They don't even live in the communities they are destroying. Those thugs are the ones who deserve thinning. I hope the cop that murdered George pays dearly for his actions.

Who was getting paid? and by whom?

Probably by these guys: http://crowdsondemand.com/

Who's paying them? Well, I have my own suspicions, we would all like to know for sure, but we know you really don't care, concern troll Bryan.

Exactly! No one is social distancing. The crowd is over ten people.

The governor can’t waive a magical wand and do away with your rights. He can only take away what you allow him to. The people have the right to peacefully assemble.

@crb1077 - That is true. And if it is allowed for all groups, then it shouldn't be a problem. Alas, it seems that only certain groups have their rights while others... well, there are the hoops; start jumping...

We get it: you're oppressed. Hence the reason you mouth off in anonymity,