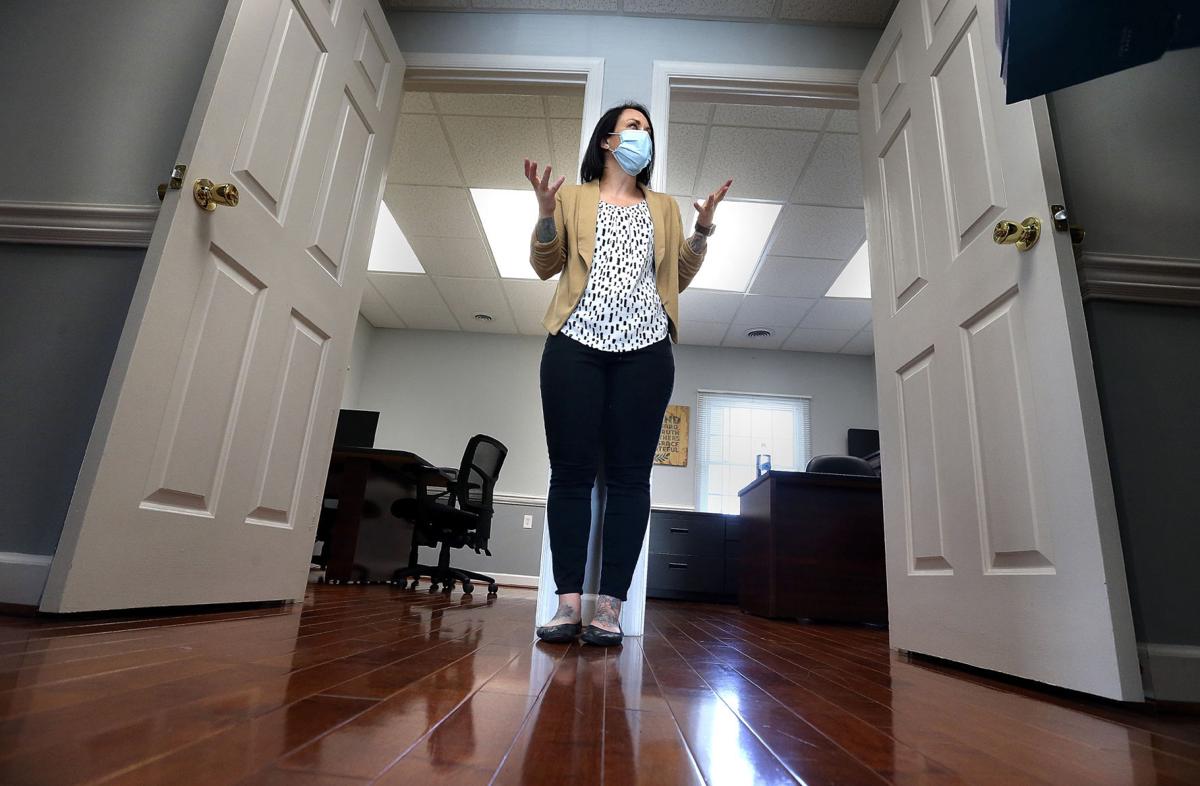 Amy Orndorff is the program manager at Integrated Medical Services LLC in Winchester, a recovery provider for those with substance use disorder or mental health issues. 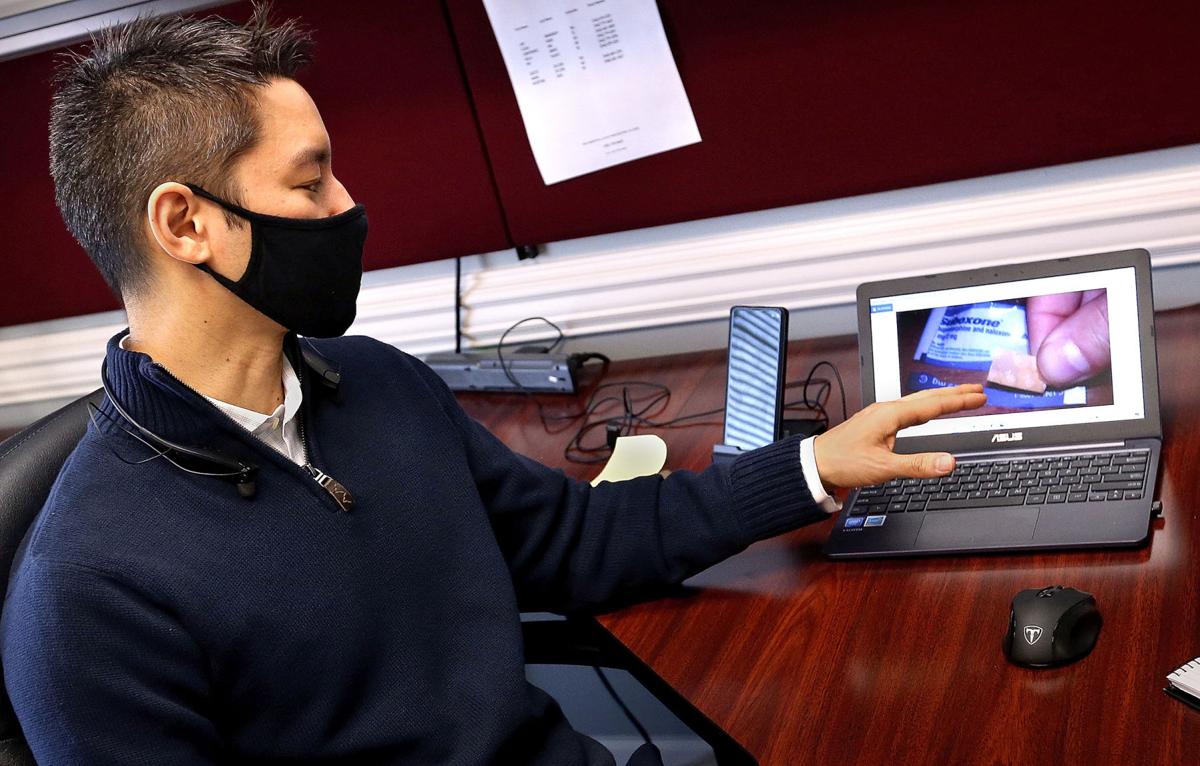 Dr. John Lee is the medical director at Integrated Medical Services LLC in Winchester and is a medication-assisted treatment specialist for opiate use disorder. 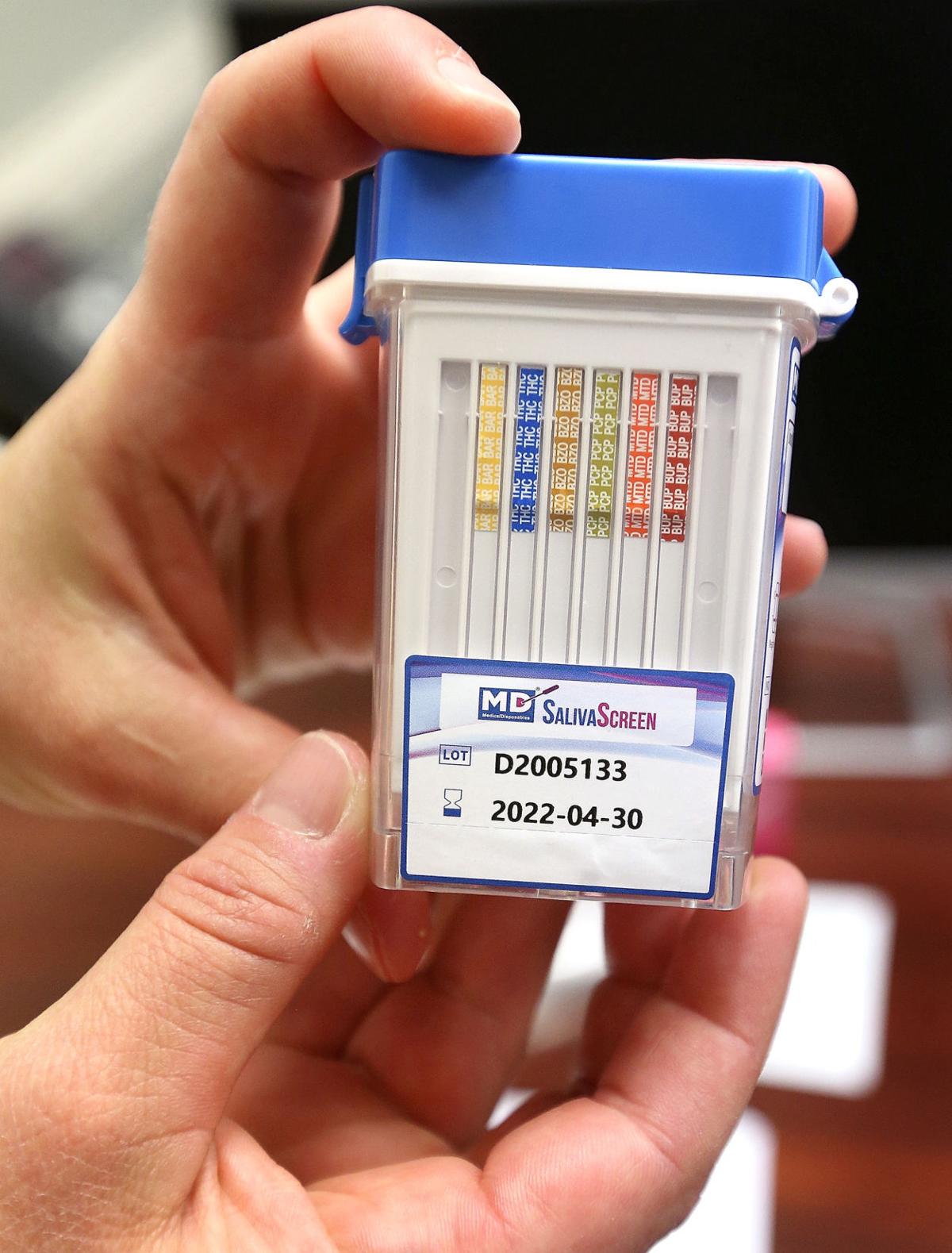 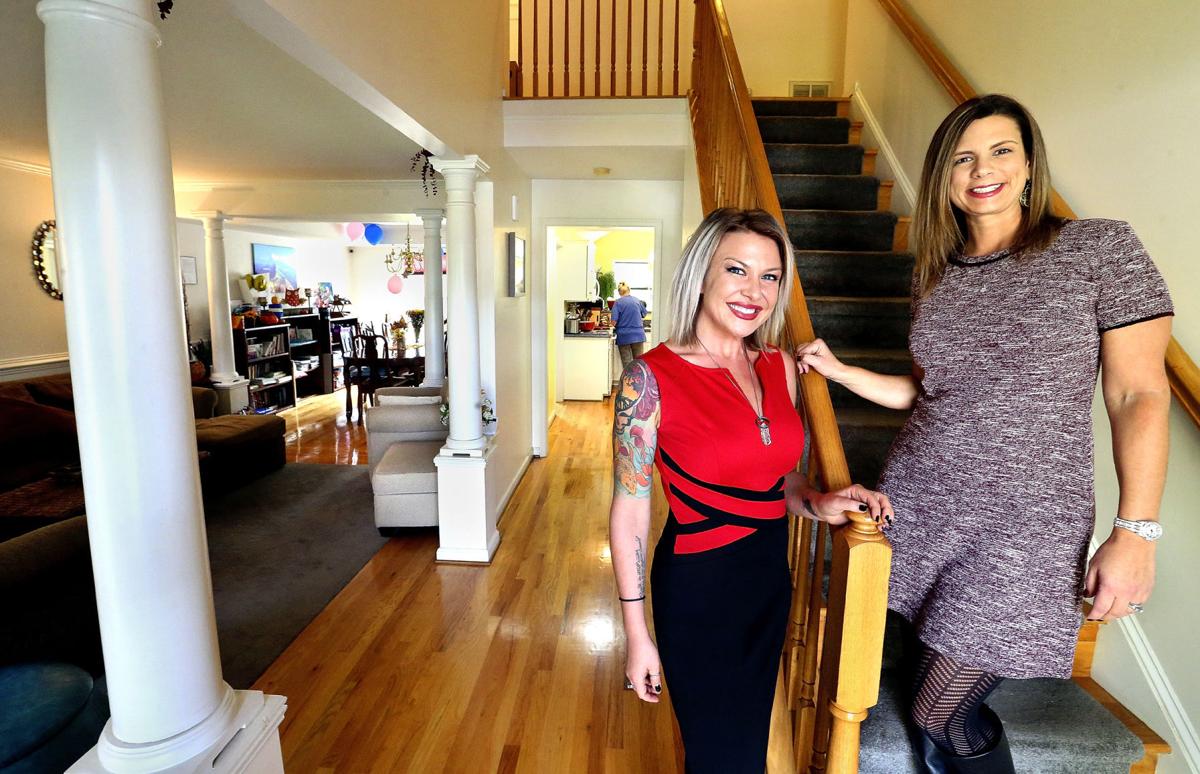 Co-founders Julie Funkhouser (left) and Meredith Speir of The Recovery Connection, which provides recovery housing for those struggling with substance abuse. Funkhouser is the chief executive officer and Speir is the chief operating officer.

Amy Orndorff is the program manager at Integrated Medical Services LLC in Winchester, a recovery provider for those with substance use disorder or mental health issues.

Dr. John Lee is the medical director at Integrated Medical Services LLC in Winchester and is a medication-assisted treatment specialist for opiate use disorder.

Co-founders Julie Funkhouser (left) and Meredith Speir of The Recovery Connection, which provides recovery housing for those struggling with substance abuse. Funkhouser is the chief executive officer and Speir is the chief operating officer.

Increased isolation and unemployment from the coronavirus pandemic exacerbated local overdoses in 2020.

The 53 fatal (40 men, 13 women) and 202 non-fatal overdoses (95 men, 47 women) last year were the most ever in the Lord Fairfax Health District, which encompasses Winchester as well as Clarke, Frederick, Page, Shenandoah and Warren counties. Deaths nearly doubled in 2020 from the 27 in 2019, and there was a 42% spike in non-fatal overdoses.

The average age of those who died last year was 34, according to Joshua T. Price, a Virginia State Police special agent and head of the Northwestern Virginia Regional Drug and Gang Task Force. The task force responds to all overdoses in the district.

In addition to stable employment, a key to maintaining sobriety is the human connection drug users get in therapy and Narcotics Anonymous meetings, said Lauren Cummings, executive director of the Northern Shenandoah Valley Substance Abuse Coalition. While many coalition clients have regained employment, many have struggled to adapt to online meetings and treatment amidst the pandemic. “They’re missing the connection, and we know addiction is a disease of isolation,” Cummings said.

Some substance users spent the $1,200 checks they received as part of the $2.3 trillion CARES Act passed by Congress in March on drugs after the checks were received in April, Price said. Eleven of the 53 deaths and 11 of the non-fatal overdoses occurred between April 14 and May 17.

Price also said a state law that took effect July 1 forbidding prosecution of overdose victims and people who call 911 to help them had unintended consequences. The law was meant to encourage 911 calls about overdoses to prevent people from dying, but Price said many victims are now reluctant to be hospitalized or seek treatment after being revived. He said about half of the overdoses the task force has responded to have had victims who refused to be hospitalized since the law passed.

Because they no longer face the the threat of arrest, Price said overdose victims are less likely to follow the recommendations of emergency responders and police to be hospitalized. Hospital personnel also often provide information on how victims can get treatment if they want it.

“Their life was saved,” Price said in an email. “But we are no closer to achieving the overall goal of getting individuals assistance.”

The deaths highlight the lack of drug treatment, which was a national problem before the pandemic. In 2017, only 19% of people who needed treatment in the U.S. received it, according to a survey by the federal Substance Abuse and Mental Health Services Administration. The pandemic has exacerbated the problem, with local providers struggling to address it.

Integrated Medical Services, an outpatient drug treatment facility that opened in June in Winchester, has only served 33 patients, according to Della Swope, IMS clinical director. That’s due to licensing delays with the Virginia Department of Behavioral Health and Developmental Services, because the pandemic makes in-person meetings with state officials difficult. The facility is still awaiting licensing for intensive outpatient treatment, known as IOP. It involves a minimum of nine hours of individual and group therapy per week.

“It’s frustrating, but I get it because everybody’s trying their best to be safe,” Amy Orndorff, IMS program manager, said of the delays and doing online treatment. “We’re navigating this unknown and nobody knows what the right or wrong way is to do it.”

IMS, with a staff of six, offers individual, family and group therapy, which has had to be conducted online due to COVID-19. It also offers the services of peer recovery specialists, who are people in long-term recovery licensed by the state to mentor drug users.

The facility, which regularly drug tests its clients, provides Suboxone, a synthetic opiate that blocks cravings and painful withdrawal symptoms. Orndorff stressed that IMS is not a pill mill and medication-assisted treatment is tied to counseling and therapy.

“We’re not pushing meds. We’re not giving out [prescriptions],” she said. “You have to be engaged in treatment or you’re not a right fit for the program.”

Dr. John Lee, IMS medical director, said many Suboxone patients use it indefinitely because they fear that if they stop, they’ll relapse. Citing a National Institutes of Health study, he said at least 50% of people who stop using Suboxone relapse.

“We understand there a lot of people who want to be off of it and there is a tapering off process, but it’s a very tricky situation,” he said. “We do let people know that once they are tapered off of Suboxone, those cravings come back.”

Although IMS accepts private insurance, most patients are getting treatment through the expansion of Medicaid in Virginia in 2019 through Obamacare, officially known as the Affordable Care Act. Orndorff said the expansion has been a benefit in providing treatment.

As of Jan. 1, 510,575 Virginians have received medical coverage under the expansion, according to the state Department of Medical Assistance Services. That includes 553 in Clarke County, 4,013 in Frederick County and 2,048 in Winchester. Medical coverage includes drug treatment.

The expansion also allowed The Recovery Connection in Winchester to increase services. It opened in 2018 as an eight-bed halfway house — officially known as a transitional living program — for seven clients and a live-in house manager.

In the fall, Recovery Connection will offer counseling and other treatment at a separate, in-patient facility serving eight women and licensed by the state. Medicaid pays for the $175 cost per client, per day, but clients must pay for the $800 monthly room and board.

Unlike some in-patient facilities, clients can continue to work, giving them more financial stability and reducing the risk of relapse. The Recovery Connection, which has served about 85 clients with between 10% and 20% relapsing, is also hoping to open two facilities later in the spring that would serve a total of 15 men.

Julie Funkhouser, Recovery Connection CEO and a person in long-term recovery, said compassion and empathy are the keys to connecting with clients.

“Those are things a lot of our women have never felt before or been on the receiving end of,” she said. “It’s a challenging line of work, but it’s the most rewarding experience I’ve ever had.”

Client Laura Clavigo, 39, said she was homeless in Philadelphia when the pandemic began. She came to The Recovery Connection in August. In addition to treatment at the facility, she’s grateful to find two in-person meetings to attend per week. Without them, Clavigo said she likely would’ve relapsed on heroin.

“I have a lot of support here,” she said. “And with those two meetings open, I was able to build a network.”

While Clavigo prefers in-person meetings, client Becky Weeks said Alcoholics Anonymous meetings meetings on Zoom have been beneficial. Before the pandemic she went from meeting to meeting. The isolation caused by the pandemic forced her to become more focused and introspective about her recovery. “There was this social thing where I had to look just the way I wanted to,” said Weeks, who has been in treatment since August.

Weeks, a recovering alcoholic and retired nurse, said when she began seeking treatment she looked down on drug users believing they weren’t taking personal responsibility for their choices. She said treatment made her understand alcohol and substance use is a disease, not a choice.

As the epidemic has grown in the last decade, there has been greater understanding that many alcohol and drug abusers are genetically pre-disposed to substance use and that opioids essentially hijack the brain. The understanding has increased the belief that criminalizing drug use is counterproductive and that it should be treated as a medical problem.

But the 66-year-old Weeks said there is still tremendous stigma about alcohol and drug abuse. She said more federal money needs to be spent and it should go for treatment programs with proven track records.

“We’ve got brilliant, wonderful, creative people dying because they cannot get help for one reason or another,” she said. “Quit ostracizing people and letting them die for a lack of help.”

Orndorff, 36, previously worked with substance users at Northwest Community Services, an area drug and mental health treatment provider. She said it’s satisfying to get people off drugs, but heartbreaking when they relapse or die. The dead are not statistics to Orndorff, but people struggling to cope with a disease.

“It never gets any easier because you give a piece of yourself to every client,” she said. “When you’re able to have some type of breakthrough where they know they can trust you and you’re not judging them and just want what’s best for them, that makes it all worth it.”

The coronavirus pandemic exacerbated the opioid epidemic in 2020 with a record number of local deaths.