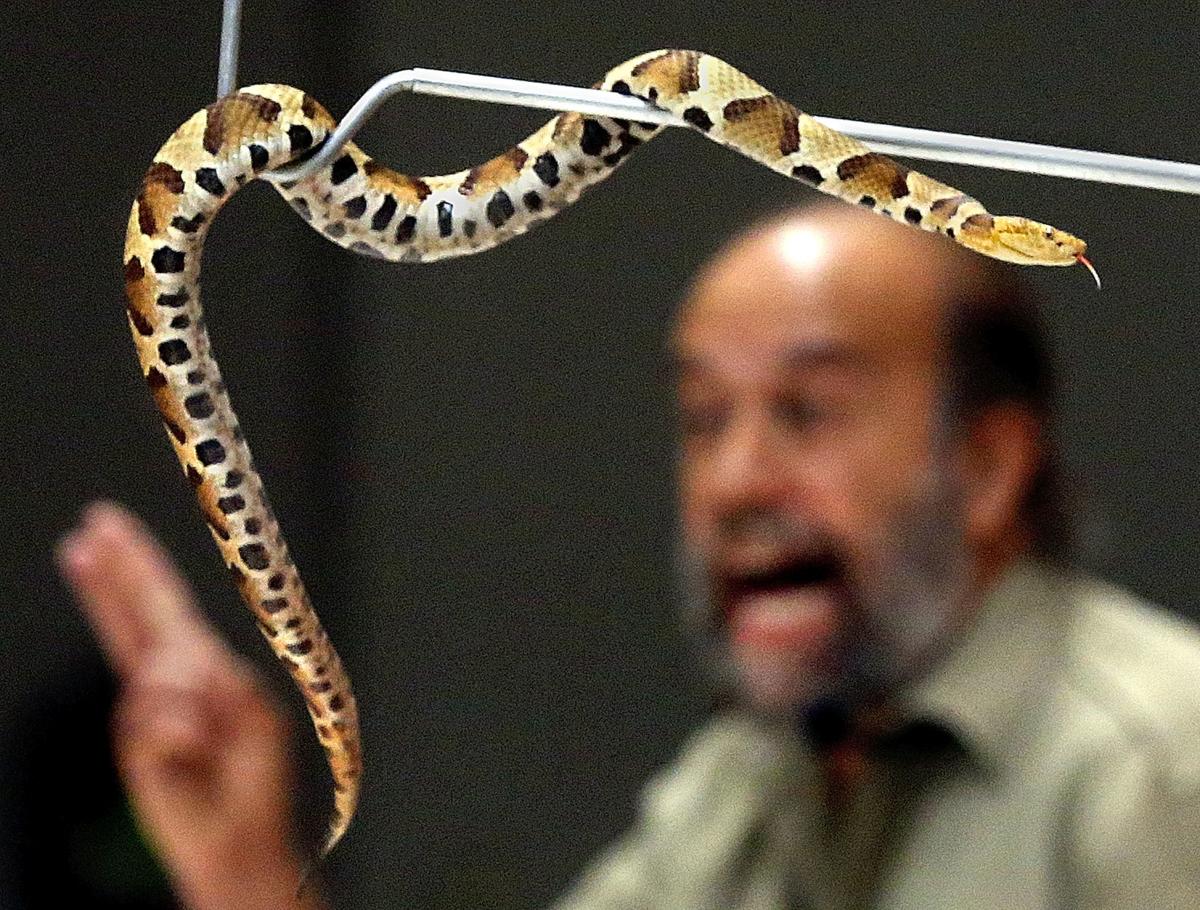 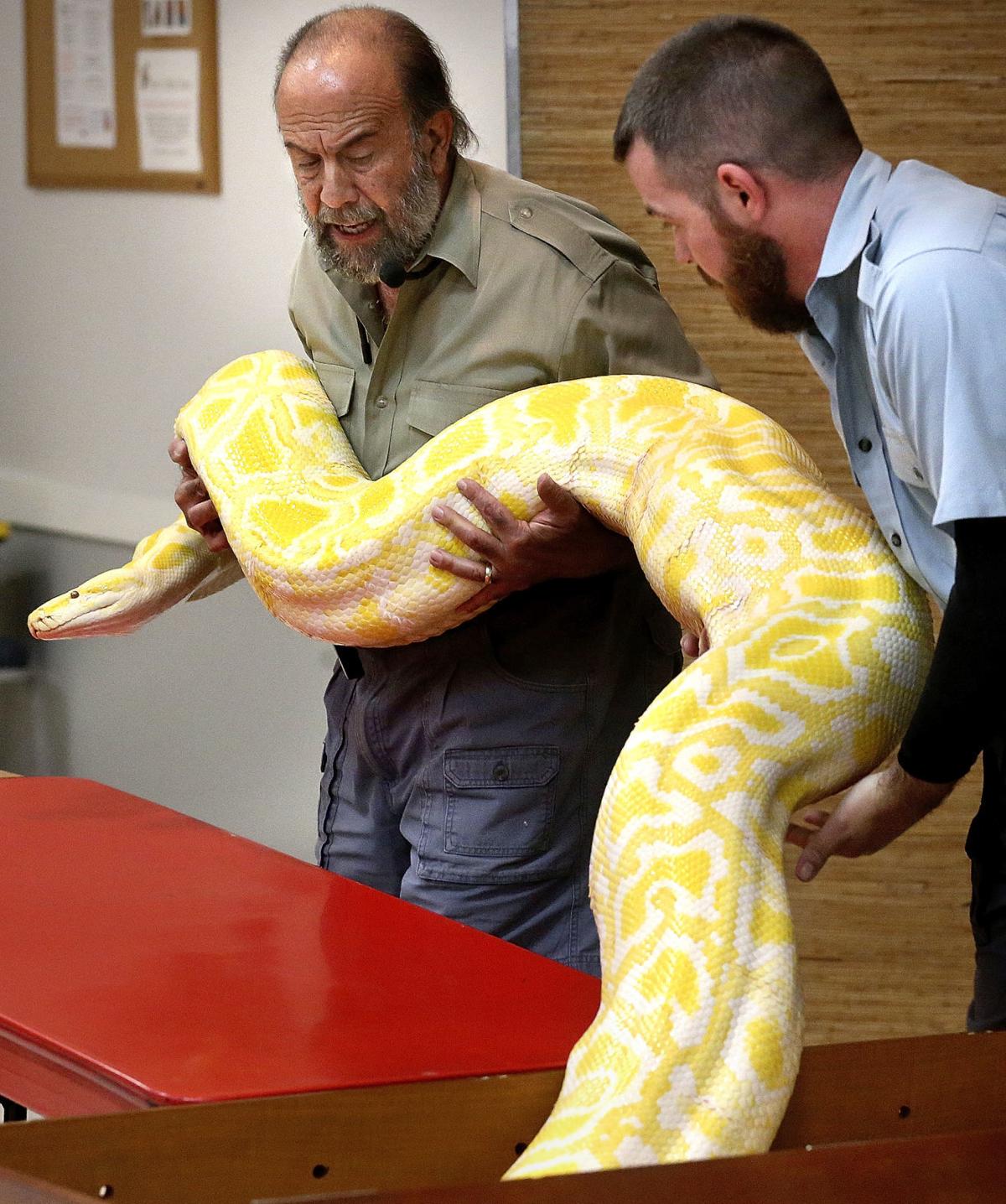 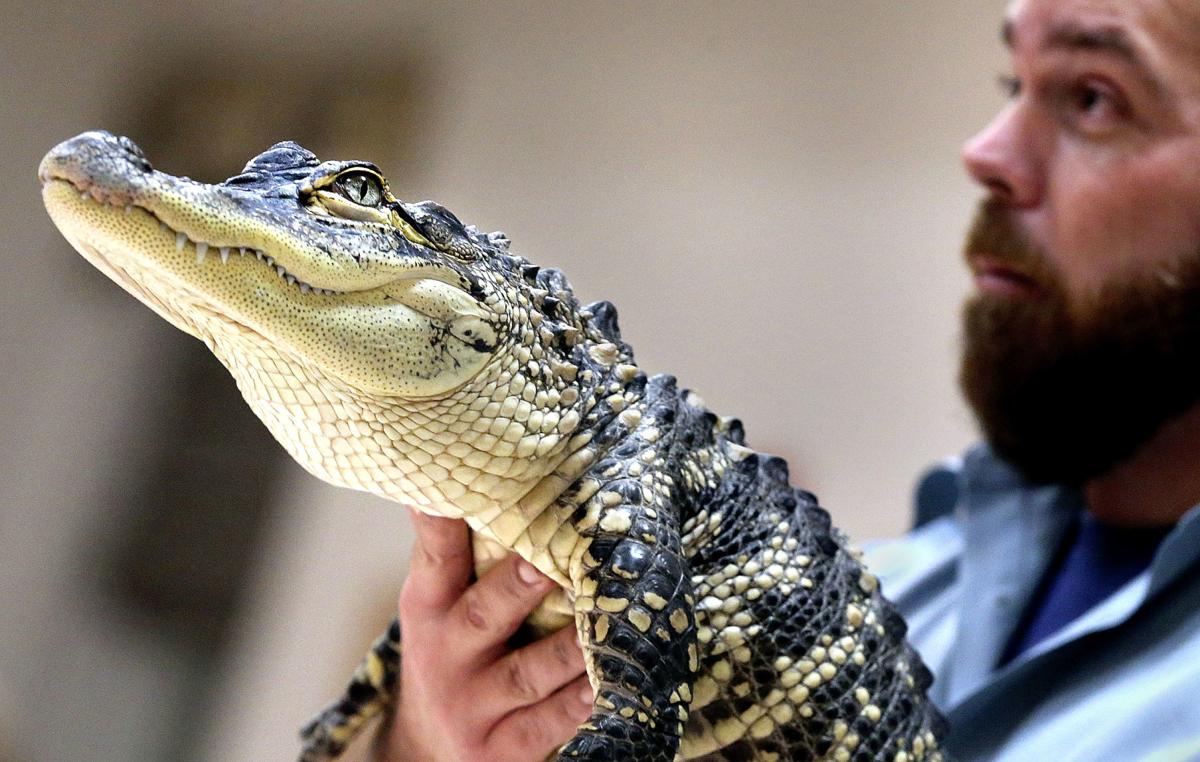 WINCHESTER — Despite being a reptile enthusiast, Michael Shwedick can't understand why anybody would want to keep one as a pet.

Yet about 1.8 million households in the United States do, statistics show.

A lizard may lie on someone's feet, or a snake may allow its owner or handler to hold it, once it realizes that the person is not going to harm it. However, a reptile is incapable of feeling the fondness or affection that someone usually expects from a pet. When a snake, for instance, wraps itself around a person's arm or body, it's simply making sure it doesn't fall off, according to Shwedick.

All that reptiles feel, he said, is hot, cold, hunger and thirst. They don't know right from wrong, or right from left. Basically, their only instinct is to find food and water.

Yet they can go for long periods — maybe even months — without eating or drinking, he said.

During his presentation, Shwedick showed his audiences a snapping turtle, a bearded lizard and a small alligator, discussing their traits as he or his assistant held them. He mentioned that while alligators can be found as far north as coastal North Carolina, they are not native to Virginia because the weather is too cool for them here.

According to National Geographic, their reptilian cousin, the crocodile, is found in small numbers in south Florida but lives mainly in Mexico, the Caribbean and Central and South America. There have been reports of crocodiles eating humans outside the United States, Shwedick mentioned.

Alligators rarely — if at all — eat people, but they may attack when they feel threatened, Shwedick said. So people visiting the southeastern states and other gator habitats should be cautious when walking near bodies of water, he said, adding they should be especially cautious with their small children and pets.

Walking on two legs, adults are large enough to generally make an alligator perceive them as predators, so it usually will try to get away, he said.

The snakes shown by Shwedick seemed to garner the most interest from spectators. They included a relatively harmless milk snake and dangerous ones including a copperhead, anaconda, cobra and python.

"All snakes have teeth, so all snakes can bite," he said.

But only about 20 of the many snake species native to the U.S. are venomous, wildlife websites show.

Many people bitten by venomous snakes actually receive no venom, yet many do, Shwedick said.

He joked that while he has been bitten by snakes only a few times, it has been often enough to make doctors at the Johns Hopkins Hospital in Baltimore quite familiar with him. A copperhead bite once destroyed the end of one of his fingers, he mentioned.

Usually, a snake in the wild will try to get away from a person it sees. Therefore, the person should move away from the snake, Shwedick said.

Most bites occur when someone tries to catch or kill a snake, or steps on it, he said.

"Never, ever touch a snake you find," he advised, even if it seems dead. Snakes have the ability to play dead, then strike when touched, he said.

Although snakes can be dangerous, many are pretty, Harron said, adding that Shwedick knows how to handle them properly.

Nearly full-house crowds attended each of Shwedick's three presentations Tuesday night at the social hall. If he visits again in the future, a larger venue may need to be found to accommodate him, his reptiles and the spectators, said First Night Executive Director Christine Germeyer.

WINCHESTER — An estimated 6,000 people filled downtown streets to celebrate the start of a new year, as well as a new decade, during First Nig…

",,,Many people bitten by venomous snakes actually receive no venom, yet many do, Shwedick said...." That makes absolutely no sense.