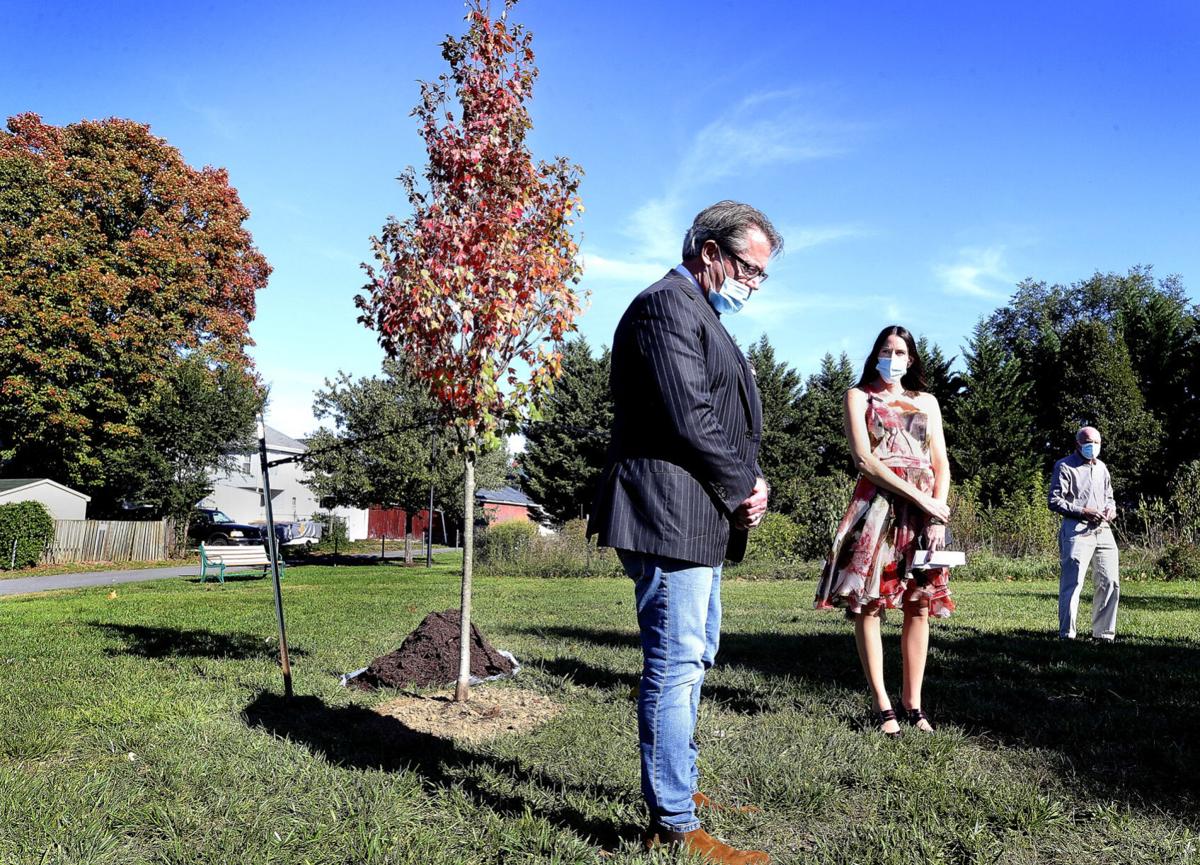 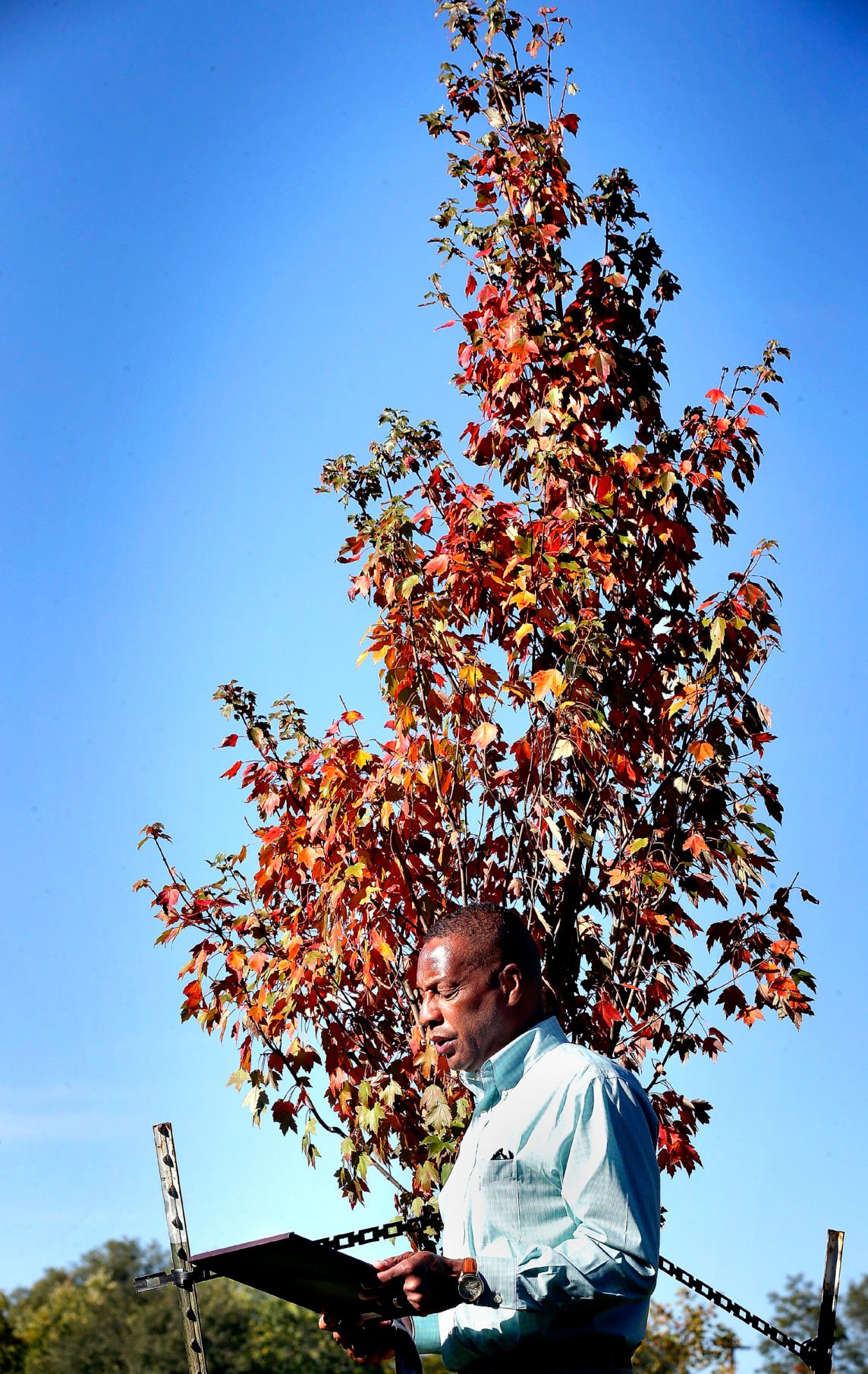 Winchester Mayor David Smith reads a proclamation he signed naming Aug. 31 as Overdose Awareness Day. Smith is shown reading beside a tree in Timbrook Park that was dedicated during a ceremony Wednesday to the memory of those who have died from drug overdoses.

Winchester Mayor David Smith reads a proclamation he signed naming Aug. 31 as Overdose Awareness Day. Smith is shown reading beside a tree in Timbrook Park that was dedicated during a ceremony Wednesday to the memory of those who have died from drug overdoses.

WINCHESTER — The red maple tree planted at Timbrook Park on Wednesday honors fatal overdose victims, but it also is a symbol of hope to survivors.

"We plant roots in recovery and the tree is going to grow in the city," Andrea Wright, a recovery advocate with Aspen Recovery Consultants, told about 20 drug treatment supporters at the ceremony. "It's a way for us to give back and plant roots here by way of recovery."

The $250 tree was purchased through Winchester's Adopt-A-Tree Program by Wright and Paul Hampton Thomson, Winchester commonwealth's attorney from 1986 to 2001. Both are in long-term recovery and work with about 10 clients in recovery through their company, which formed in 2018.

Thomson said the ceremony, which included police and prosecutors, was part of a "sea change" in attitudes about drug users. While heavy crack cocaine use in the 1980s, much of it involving Black people, triggered harsh drug laws, the opiate epidemic, which has mainly involved white people, has led to a greater focus on treating users rather than punishing them.

The change is credited with slowing overdose deaths, which skyrocketed nationally and locally in the last several years. In 2018, there were 67,367 fatal overdoses — most from opioids — compared to 70,237 in 2017, according to the Centers for Disease Control and Prevention. In 2018 in the Lord Fairfax Health District, encompassing Winchester as well as Clarke, Frederick, Page, Shenandoah and Warren counties, there were 22 deaths compared to 40 in 2017. Last year there were 27 deaths.

But drug deaths have ballooned in 40 states since the onset of coronavirus pandemic, including Virginia, according to the American Medical Association's Advocacy Research Center. In the Lord Fairfax Health District this year through Tuesday, 45 people (33 men and 12 women) have fatally overdosed and there have been 160 non-fatal overdoses involving 116 men and 44 women, according to Joshua T. Price, Northwest Regional Drug and Gang Task Force coordinator. At this time last year, 24 people had died (19 men and five women) and there had been 110 non-fatal overdoses (116 men and 44 women).

Recovery advocates blame COVID-19 for increasing isolation and decreasing access to hands-on treatment, which was already hard to get before the pandemic. There are some advantages to online treatment such as for parents who can't leave their children at home due to school closures or people who can make a call rather than having to take time off from work. Nonetheless, Thomson said in an interview that one-on-one treatment is important.

"You can share emotion and reflect on the journey of recovery in a much more meaningful way," he said. "When you have to do it by Zoom or telephone, you sometimes lose contact with people."

To reduce drug abuse and deaths, Wright said the federal government should increase funding of treatment programs that have demonstrated success in reducing substance abuse, including those that provide medication-assisted treatment, such as methadone and Suboxone. Wright also hopes the Virginia General Assembly, which this year reduced the penalty for carrying an ounce or less of marijuana to a $25 fine rather than an arrest, will expand drug decriminalization.

Wright studied how Portugal decriminalized drugs in 2001 for her master's degree and most recently visited the country in 2017. She said she understands the U.S. is far bigger and more conservative than Portugal, but said it can still be a model. She emphasized decriminalization includes enforcement, unlike drug legalization. The difference is casual users avoid incarceration and abusers get treatment.

"It helps users, not the people that are drug dealing, but users, to have the opportunity to get help," she said. "We can be doing a lot more to prevent lives being lost and families torn apart."

Restructuring the first sentence of the caption might better indicate that those who died did not die DURING the ceremony; comma count. Also, not sure why masks were needed; but, wait, not appropriately. Never mind.