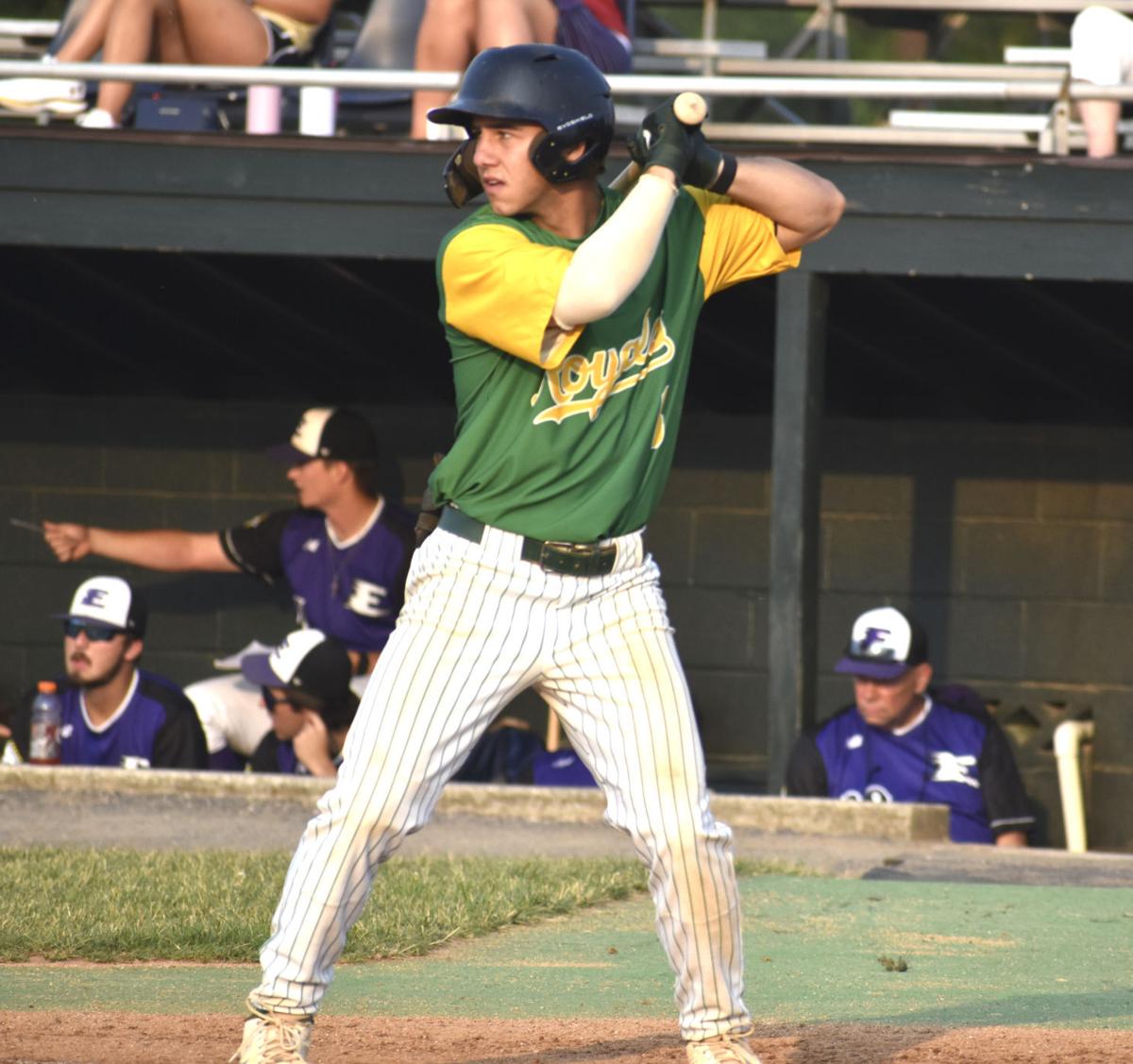 Charlotte rising sophomore Nate Furman has been an Valley Baseball League MVP candidate this year for the Winchester Royals. The second baseman leads the league in batting average, on-base percentage and stolen bases and ranks in the top 10 in several other major categories. 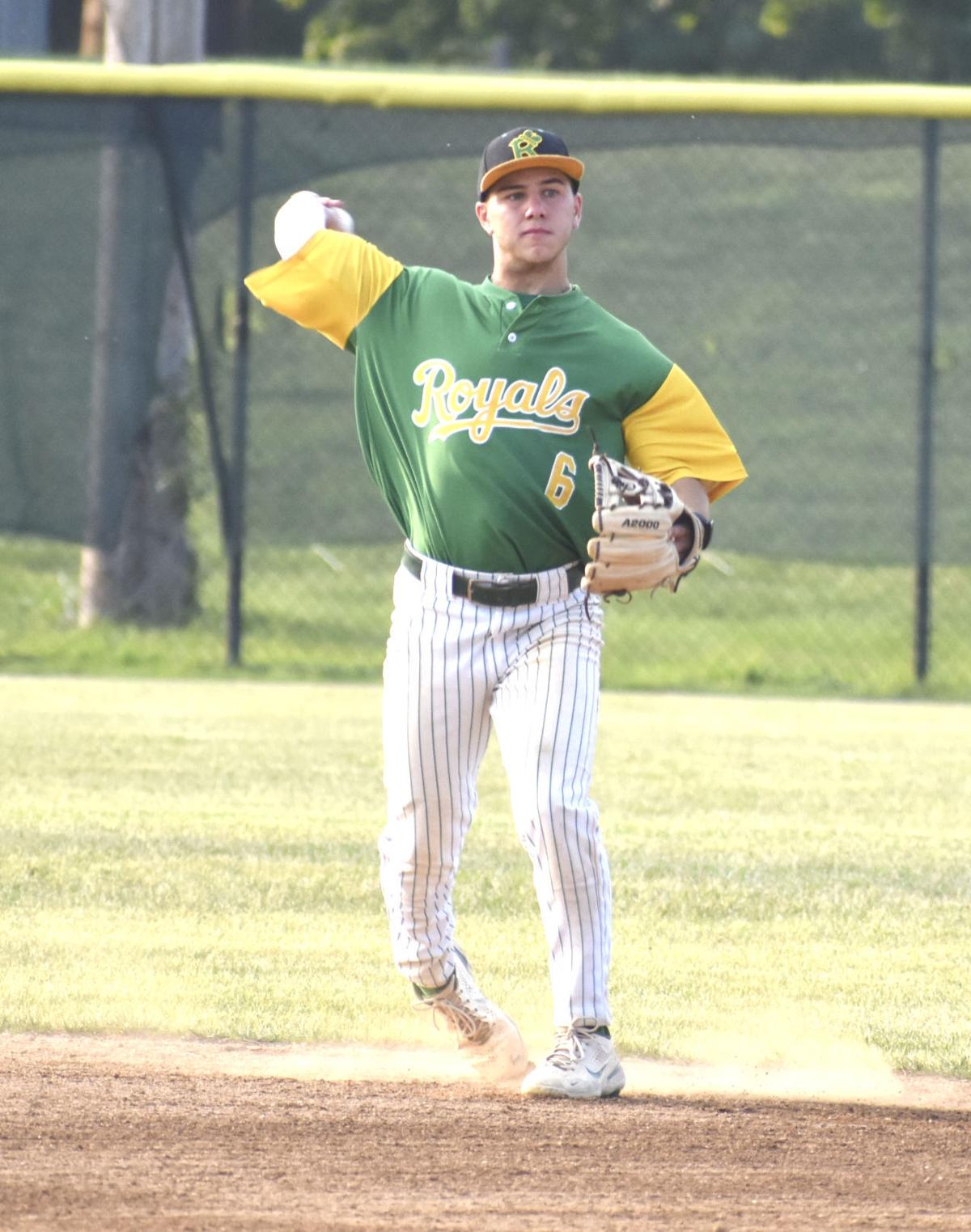 Winchester second baseman Nate Furman throws to first after fielding a grounder during warm-ups prior to the first inning of Monday’s game against Strasburg. Furman has not committed an error in 48 chances this year.

Charlotte rising sophomore Nate Furman has been an Valley Baseball League MVP candidate this year for the Winchester Royals. The second baseman leads the league in batting average, on-base percentage and stolen bases and ranks in the top 10 in several other major categories.

Winchester second baseman Nate Furman throws to first after fielding a grounder during warm-ups prior to the first inning of Monday’s game against Strasburg. Furman has not committed an error in 48 chances this year.

WINCHESTER — During his exit interview with the University of North Carolina at Charlotte coaching staff this spring, Nate Furman was asked if he could work on stealing bases this summer.

After stealing one base in three attempts in 36 games (27 starts) as a true freshman second baseman for the 49ers, Furman has terrorized pitchers, catchers and middle infielders with the Winchester Royals. Winchester’s leadoff hitter leads the 11-team Valley Baseball League with 23 steals on 24 attempts in just 26 games.

The 5-foot-9, 175-pound Furman might not be always be able to do everything he’s set his mind to in a Royals uniform. It just seems that way.

Winchester’s shortest player has loomed larger than practically every other player in the VBL this season, so much so that the Winchester Royals tweeted “MVP” in response to Monday’s announcement stating that Furman had earned VBL Hitter of the Week honors for games played July 12-18.

He ranks fifth in slugging (.615), second in walks (28) and is tied for second in runs (36). He only has 13 strikeouts, making him the only person in the VBL with at least 20 walks who’s close to a 2 to 1 walk-to-strikeout ratio (about 60 percent of players with at least 20 walks have more strikeouts than walks). Furman also has three home runs, 21 RBIs, seven doubles and has not been charged with an error in 48 chances.

Furman has done all this despite not reporting to the team on June 23, Winchester’s 12th game of the season, because Charlotte wanted him to rest. The 49ers season didn’t end until June 6 (the Royals opened on June 5).

“As soon as he came in, I put him right at the top of the lineup, and the offense took off,” said Royals manager Mike Smith, whose team’s runs per game has jumped from 5.3 to 7.3 with Furman in the lineup. “He was an immediate sparkplug.”

“He’s always on base,” Winchester shortstop Cristian De Guzman said. “It’s a big thing having him up there.”

Smith was told by Charlotte associate head coach Bo Robinson that he was getting “a really grinder-type kid.”

Taking a gritty approach to baseball is the only approach Furman has ever known. In that regard, being smaller is almost an advantage for Furman, because he’s never been able to take anything for granted.

For Furman — who can’t help but have a smile on his face when he’s talking about baseball — putting in extra work comes naturally. With his short stature, he’s always had to give everything he has into every facet of baseball to make it where he is today.

“I just try to be a gamer, do whatever I can to help the team,” Furman said. “I’m not the biggest guy or the strongest guy. I’m just taking that and using that as a chip on my shoulder to compete every day.

“Growing up, my brothers always said to me, ‘If you’re not working hard, somebody around the world is.’ I’m just taking that advice and using that to my advantage, and just doing everything I can to be the best player that I can be.”

Furman’s brothers definitely played a large in shaping his work ethic while growing up in Brookhaven, Pa., which is 20 miles outside of Philadelphia.

Having two older brothers who loved baseball and excelled was everything that Nate could have asked for as a child.

“They always trusted in me and believed in me,” Furman said. “They always told me that the youngest is always the best.”

Furman said their support remains a constant in his life. In addition to playing collegiately, both brothers are veterans of the summer college baseball circuit. Dan Furman pitched in four games for New Market of the VBL in 2015 before he had to head home due to an injury.

“Now that they’re out of the game, they want me to do everything I can to play my best and help my team out.”

One of the ways Furman has helped his teams out over the years is being versatile. Though he throws right-handed, he’s always batted from the left side. And while he played second base until age 10, he played shortstop until the end of high school before making the transition back to second base for college.

Furman said he had no problems moving back to second at Charlotte. In making the switch, he focused on the advantages.

“I feel I can be really athletic over there, and I have some extra time on the left side of the infield [to throw to first base],” said Furman, who gravitated toward the infield as a child because of his quickness. “Growing up, I always worked on my footwork over there.”

Offensively, Furman said it took him a while to adjust to college ball, and he had a tough time in the fall. But he spent a lot of time in the weight room in the winter, and his improved strength made him a lot more comfortable in the spring.

Furman had to bide his time in the spring — Robinson told Smith he wasn’t sure if Furman wasn’t going to start for the 49ers when they discussed having him play for Winchester — but the “grinder” eventually became a regular for a team that qualified for NCAA Regionals.

After appearing in seven games off the bench in Charlotte’s first 20 games, Furman made 27 starts and played in 29 of the 49ers’ last 41 games. Furman started all five of Charlotte’s postseason games. The 49ers finished 40-21 after losing to Maryland in their third regional game.

His OBP ranked first on the team for those who had at least 30 plate appearances, and Furman had 22 walks against 15 strikeouts.

“I really just trusted in my abilities and trusted my swing,” Furman said. “We had an awesome year at school, and I can’t wait to see what next year brings.”

He’ll be riding a tidal wave of momentum when he does head back to Charlotte.

Furman finished the year hitting sixth for the 49ers, but he said it really doesn’t matter to him where he hits in the lineup.

Still, he grew up hitting first or second, and it’s clear he has an affinity for the top of the order with his ability to make pitchers work, and get on base. Furman has reached base at least once in 25 of 26 games.

“Not giving away at-bats was one of my goals for the summer,” Furman said.

“He has a great eye at the plate,” Smith said. “He’ll work the count and take a walk.”

Strikeouts are mostly shrugged off in baseball today. Someone like Furman is better off putting the ball in play, though, because he’s not going to ground into many double plays with his speed. In Monday’s game against Strasburg, Furman led off by grounding to first and missed beating the first baseman to the bag by a hair.

Strasburg probably breathed a sigh of relief after that at-bat because of the havoc Furman creates on the bases.

Furman said he’s always been fast and always been a good base runner, but he’s never been a prolific base stealer. At Charlotte, he was particularly hesitant because of the quality of moves from the pitchers.

Furman said his improvement in Winchester is a matter of trusting his lead — he tries to get a 12-foot head start when he’s at first base — and having the confidence in himself to take chances. For example, in a recent game he found himself in scoring position while at second base with two outs, but he felt certain he could steal third, so he did. Furman wound up scoring on a passed ball.

Furman added that another huge benefit of his stealing is that he can help the team even when he doesn’t decide to take off. Furman said Smith doesn’t give any signs, so Furman’s the master of his own fate when he gets on base.

“I feel when I’m base and I can steal bags, [the other team] has to pay attention,” Furman said. “Maybe they’ll miss a spot [with a pitch], and we’ll get some hits. Just stuff like that can change a game.”

While focusing on stealing and not giving away at-bats has resulted in a special summer on the field for Furman, simply enjoying this new experience has also helped with Furman’s production.

Furman is loving living with Bob and Amy Amos this summer — their son Alex, a former Millbrook star, played at Pittsburgh with Dan Furman — and playing in Virginia.

“Before I came out here, my brothers just told me to come out here and enjoy it,” Furman said. “It’s not every day you get to go to Winchester, Virginia, or New Market, Virginia, or Strasburg.

“All this year I’ve been trying to have the mindset of not ‘Have to,’ but ‘Get to.’ I get to come to the field every day and work with these guys, and I get to play the game of baseball. It’s been great.”