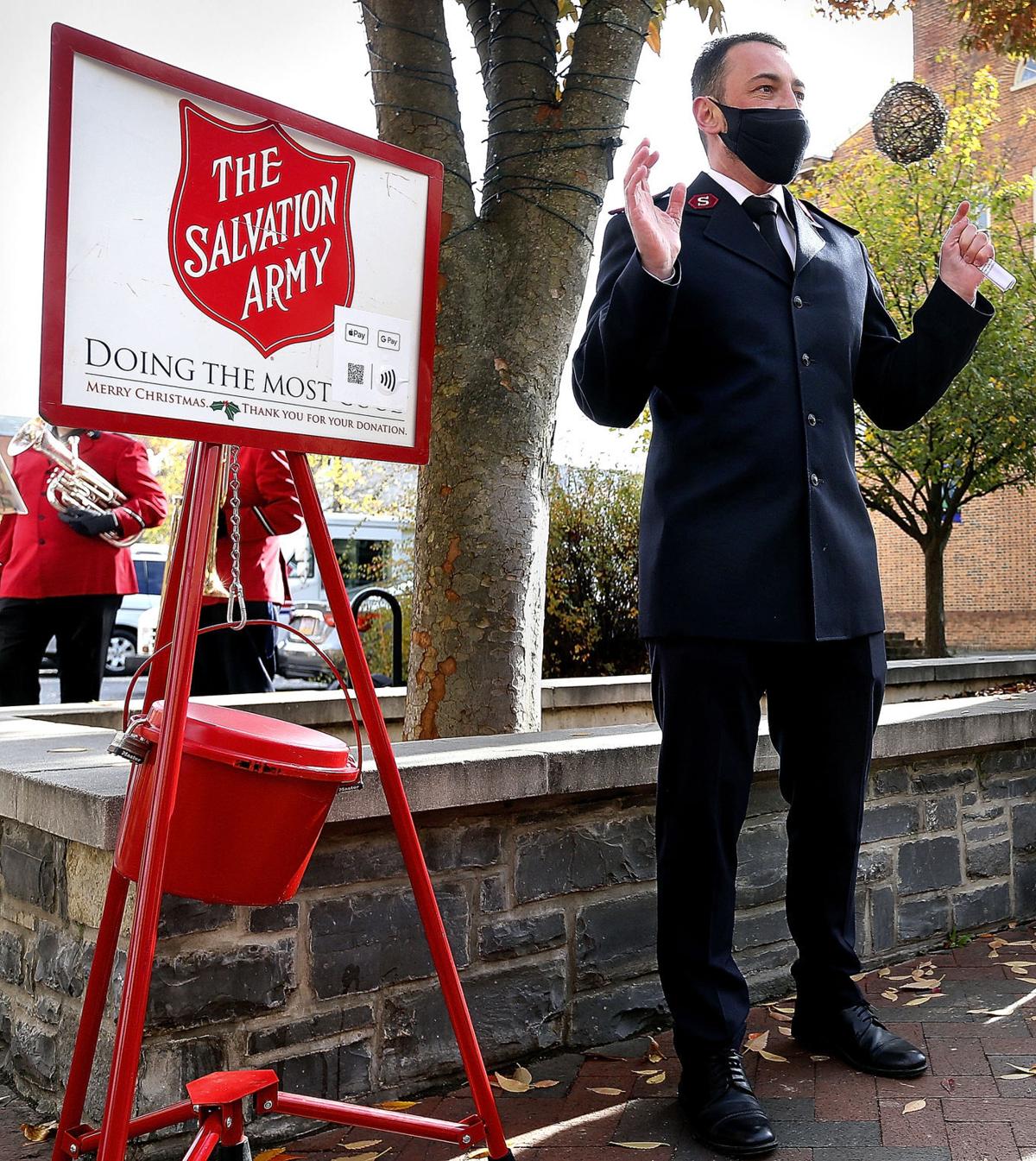 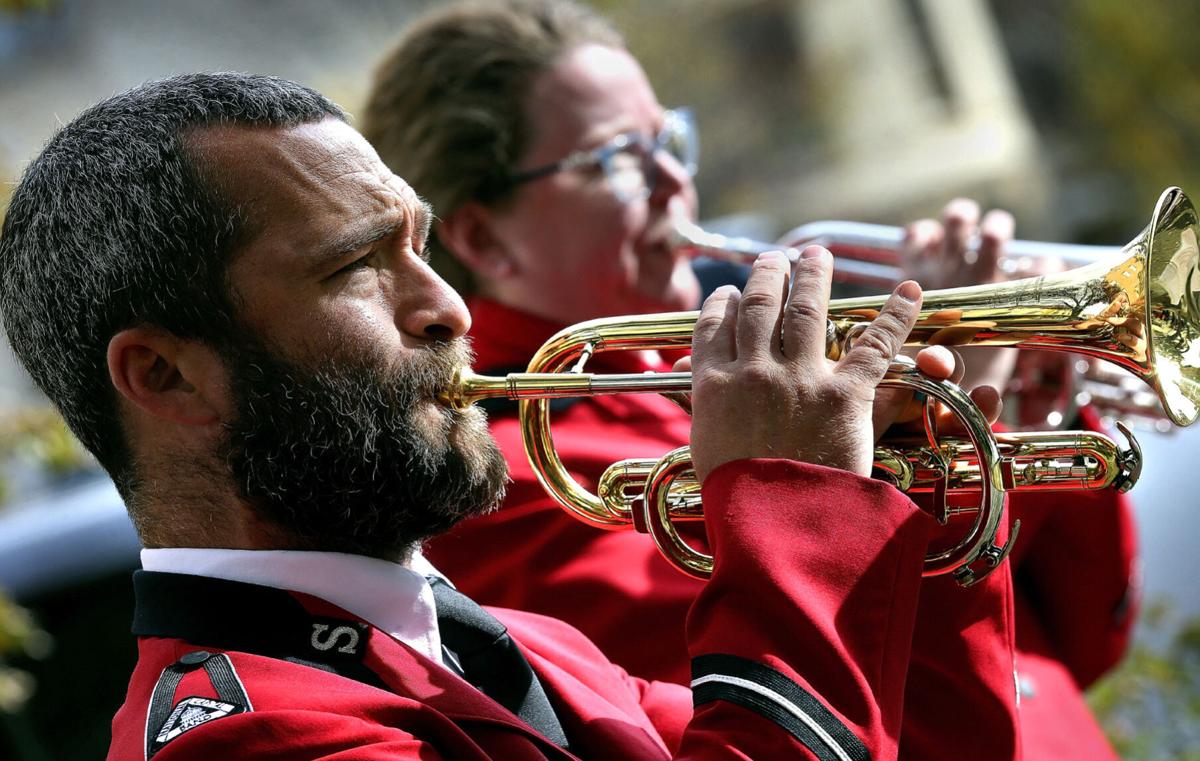 David Delaney of Boyds, Md., and Randi Bulla of Crownsville, Md., play the cornet as the National Capital Band of the Salvation Army performs “The First Noel” during the Salvation Army Red Kettle campaign kickoff Thursday on the Loudoun Street Mall. 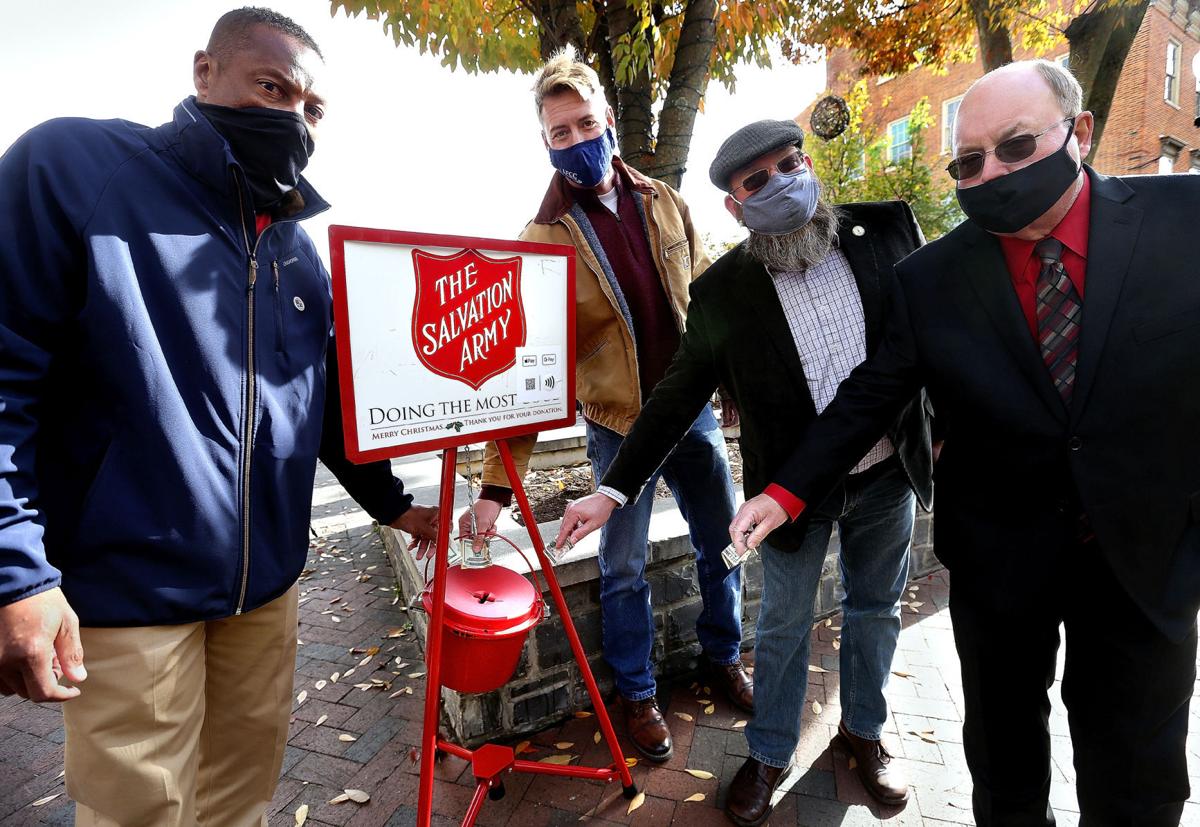 David Delaney of Boyds, Md., and Randi Bulla of Crownsville, Md., play the cornet as the National Capital Band of the Salvation Army performs “The First Noel” during the Salvation Army Red Kettle campaign kickoff Thursday on the Loudoun Street Mall.

WINCHESTER — Winchester Salvation Army Lt. Jared Martin says fundraising for the annual Red Kettle campaign is going to be an “uphill battle” this holiday season due to the COVID-19 pandemic.

The local campaign kicked off Thursday afternoon on the Loudoun Street Mall in front of El Centro Mexican Restaurant. It runs through Dec. 24 and involves bell ringers soliciting donations at numerous kettles stationed around the community Monday to Saturday.

Proceeds will help families in Winchester, Frederick County and Clarke County with food, temporary housing and other assistance.

While the Salvation Army will be able to solicit donations at most of the same locations, far fewer people have signed up to be bell ringers — only 30 people have volunteered, down from about 80 last year. Seniors citizens typically account for a lot of the volunteering, but because the age group is particularly vulnerable to COVID-19, they’re reluctant to be bell ringers this year.

The mayors of Winchester, Stephens City, Middletown and Berryville all made brief remarks at the Thursday’s event.

Winchester Mayor John David Smith thanked the Salvation Army for the work it does in the community.

“More than ever during this pandemic, there are families out there who are struggling,” Smith said. “They are losing their homes, they are losing their jobs. They are relying on food banks and organizations like this to help them out. I think more than ever this year, giving is very, very important. We ask that you help families out because these are good causes. This is the best way to do it.”

Middletown Mayor Charles Harbaugh IV noted that many local charitable organizations are struggling for donations. “This year, we’ve really got to come together and support these nonprofits,” Harbaugh said. “This is a good start today for the Salvation Army. Sadly for them, their bread and butter is malls and [big retail stores] and places like that [during the Red Kettle campaign]. But if people aren’t going to those stores, it’s going to be a little harder for them to donate the way that they used to.”

Due to the pandemic, bell ringers will stand 6 feet from the kettle and wear a face covering. They also will be issued a disposable apron. People can drop coins and cash in the kettles, or they can make a donation using Apple Pay, Google Pay or a credit card instead.

There also is an option to set up an online “kettle” to collect donations. Go to redkettlenow.com and scroll down to Winchester. Individuals or groups can create a kettle in their name and invite friends and family to donate. The online effort is part of a nationwide campaign called #RescueChristmas.

Several Winchester-area resident have already set up kettles. The top fundraisers so far are Seth Thatcher, Mary Fetter, Kay Anderson and Kim Burke, according to the Salvation Army. Groups such as the Kiwanis Club of Winchester also have set up kettles.

To raise awareness about the Red Kettle campaign, Martin along with Salvation Army board member Trae Vickers and employee Al DeCesaris will run/hike 24 miles of the Appalachian Trail in one day. Throughout, they will use The Salvation Army of Winchester’s Facebook Live to share information about online kettles.

To volunteer to be a bell ringer, call 540-662-4777 extension 14 or email to Hunter.Selby@uss.salvationarmy.org. Shifts can be done in two-hour increments.

The Salvation Army also launched its Angel Tree Program on Thursday to collect Christmas presents for local children. People who want to provide gifts are asked to select an angel-shaped tag from Christmas trees placed in locations throughout the community. Each angel contains information about the child, such as age and Christmas wish list. Three hundred families have signed up to for the program, which will benefit roughly 600 children.

Things happen super fast with many people who have worked, have children, and had homes and suddenly are without the basics needs of life.. When you are running out of food, or place to stay or dont have a job anymore to pay those incoming bills, your mind can snap from depression and anxiety.. The Salvation army provides an extremely vital service for those who need that help at a terrible time in the lives. Consider it the Winchester areas Emergency back up plan just in case you are in a state of need one day and need them desperately. Because things can happen in a flash in ones life without warning. And bell ringers are doing this for your benefit on their own time. .

The Salvation Army is not required to file a form 990 with IRS listing their finances including administrative costs. They are registered a a church. I don't give to charities that do not have a form 990 so I know where my money is going. I stopped giving to the Red Cross years ago because of the excessive salaries they pay their executives. I don't think there is a commandment that states "Thou shalt not be accountable". The only time I see or hear about these folks is at Christmas with their annoying bell clanging. I think a nice soft Christmas tune would go over with folks much better.

Donate at the link below to help #RescueChristmas and do the most good! All donations stay local! Even $5 will help ease suffering in Winchester.