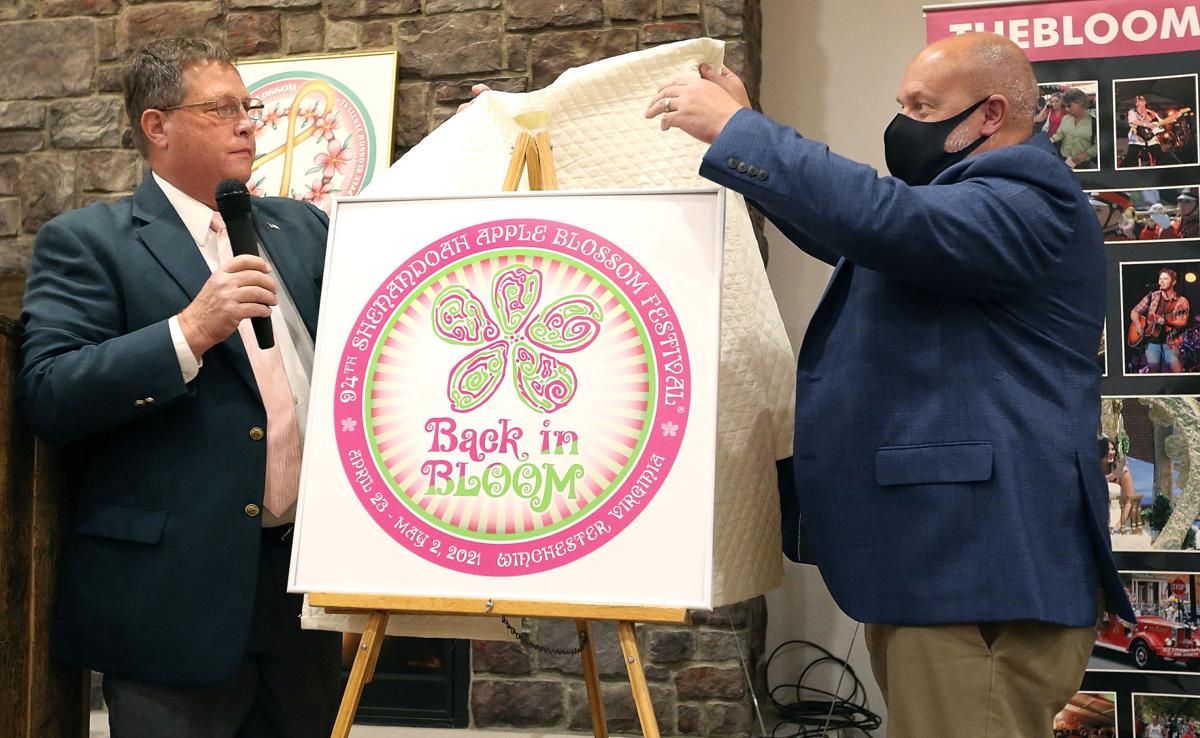 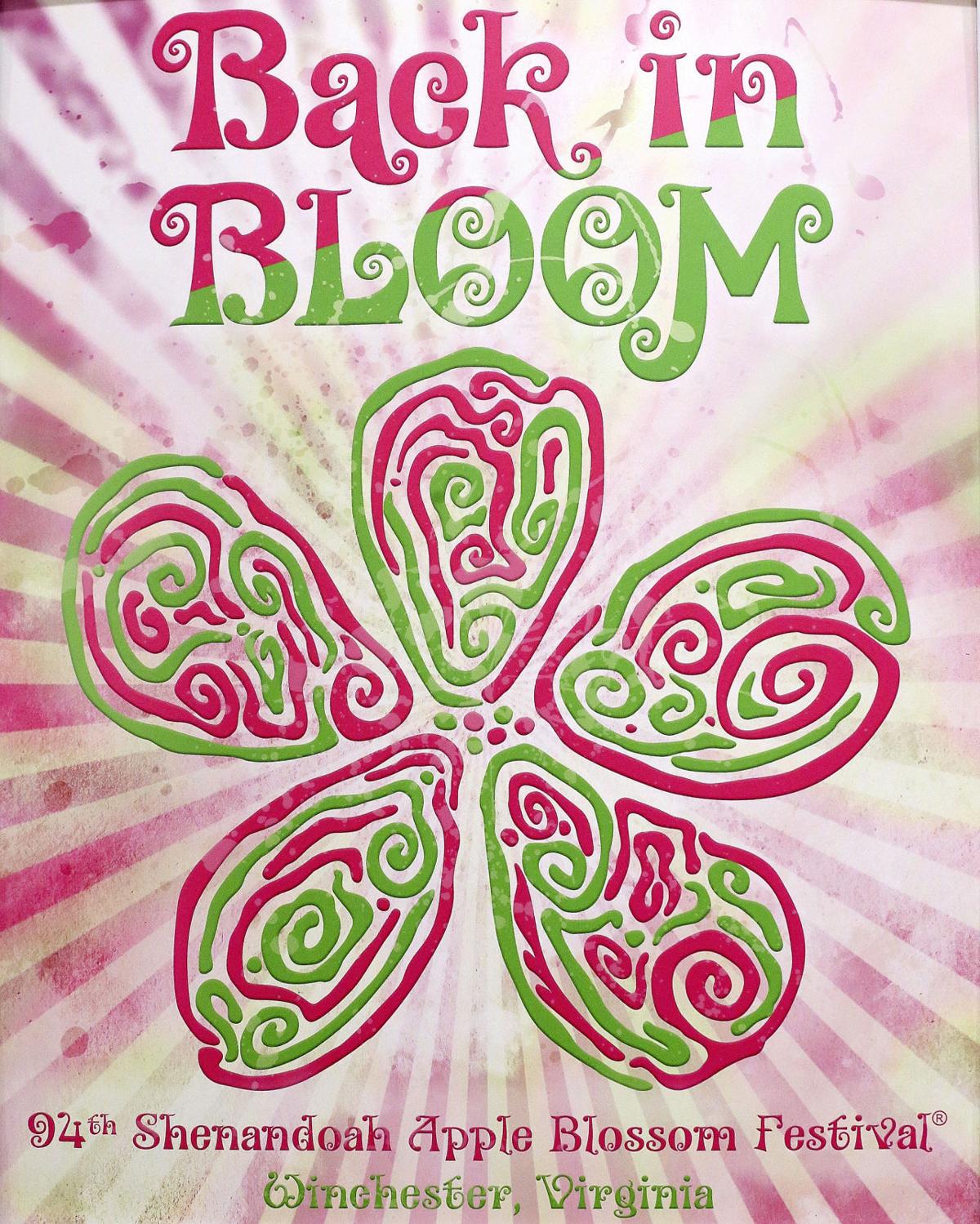 "Back in Bloom" is the theme for the 94th Shenandoah Apple Blossom Festival which will run April 23- May 2.

"Back in Bloom" is the theme for the 94th Shenandoah Apple Blossom Festival which will run April 23- May 2.

After being canceled this year because of restrictions on large gatherings due to the coronvirus pandemic, the Shenandoah Apple Blossom Festival is returning this spring. Tickets go on sale Dec. 1.

The theme for the 94th festival is "Back in Bloom," which Shenandoah Apple Blossom Festival President Tommy Price and Executive Director Brad Veach unveiled Wednesday night during an announcement party at West Oaks Farm Market.

"We are glad to be back," Veach said in a Thursday phone call. "And, yes, it's going to look a little different, but we plan to celebrate safely, and we want the community to celebrate too."

With more than 40 events, including parades, dances and sporting events, the Shenandoah Apple Blossom Festival attracts thousands of people to Winchester each year. The crowds, the party-like atmosphere and the variety of things to do bring a jolt of energy to the area, but the number of people could also accelerate the spread of the coronavirus.

Next year's celebration can't be a full Bloom because of statewide limits on the number of people who can attend indoor and outdoor gatherings. Organizers have been working for months, under guidance from the local health department, to determine which events can be held and which locations are safest.

The 94th festival, which takes place from April 23 through May 2, will feature the luncheons, the dances and maybe the 10K race and the Kids Bloomin' Mile.

But there won't be any parades, celebrities or Old Town Midway. And because there won't be a queen or a coronation, there's no need for a court of Little Maids, Pages, Princesses and Maids of the Court. Veach said he wanted to give the local children and teens, who traditionally serve in those roles, the full festival experience and not deprive them of riding in the parades or participating in a coronation.

Some locations will change as well. Large-scale events such as the Bloomin' Wine Fest, Bloomers' Luncheon and the dances will move to the Frederick County Fairgrounds in Clear Brook, which has 7 acres and plenty of parking. Four tents will be set up on the grounds to allow for greater social distancing.

Smaller events, like the Ladies Horticultural Luncheon and Pumps and Pearls Party, can be held at venues in Winchester, Veach said. The Stag Luncheon will still take place at Winchester Cold Storage.

Veach said he knows people are confused as to why the Firefighters' Parade and the Grand Feature Parade are canceled when the festival is still six months away.

All planning must be based on the restrictions in place now, Veach said, since it's unknown if things will be better or worse in the spring. Planning a traditional parade is a huge and expensive project and can't be pushed to the last minute.

"It's not like we can flip a switch and have a parade," Veach said, adding that marching bands must be booked, seating arranged and law enforcement help requested. "It takes almost a year to plan out [the Grand Feature] parade."

Planning is still ongoing for all the events and specifics will be released in the coming weeks, Veach said.

Beginning Dec. 1, tickets can be purchased in person at Festival Headquarters at 135 N. Cameron St. in Winchester, by calling 540-662-3863 or through a new online ticketing system at www.thebloom.com. Tickets purchased online can be printed out at home.

Events will likely sell out early since indoor activities are limited to 50% occupancy of the building or 250 people, whichever is less. Outdoor events at the fairgrounds will be limited to 1,000 people, including the festival volunteers, entertainment, vendors as well as ticketholders.

Veach, in his first year as festival director, had lined up an impressive slate of celebrities for the 2020 festival including NFL legend Terry Bradshow for grand marshal and former Washington quarterback Joe Theismann as sports marshal.

But on March 17, festival staff announced it had suspended all planning for the 2020 festival. The only other time the festival hasn't been held since it began in 1924 was during World War II from 1942 to 1945.

"There are just so many challenges," Veach said about planning a festival during a pandemic. "It's going to look a lot different, but we're doing the best that we can in the circumstances. It's a different world."

Maybe a reverse parade? Where the floats and luminaries are in stationary places, and people safe in their cars drive by? I know, it'd be a logistical nightmare for the police, keeping traffic moving smoothly, but I've seen a lot of other places do this sort of thing and it's worked out quite nicely.

If it can't be done like always, I say forget it.