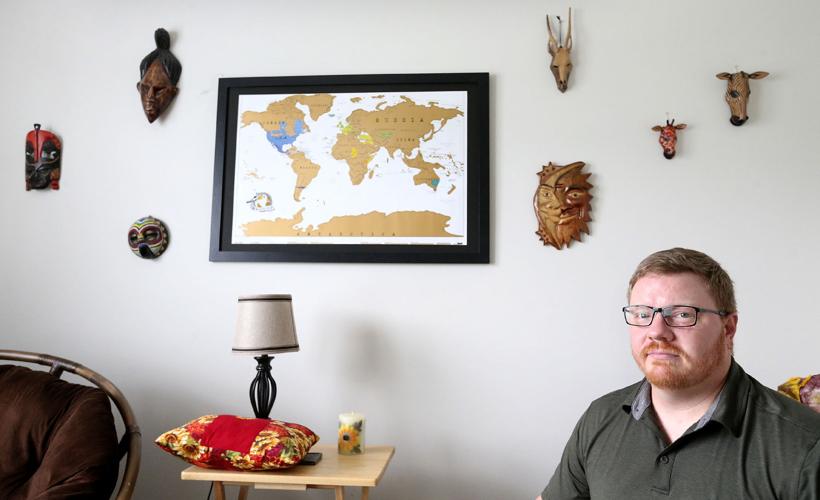 Military veteran and Shenandoah University student JD Oldaker of Stephenson is working on a business that introduces virtual reality to the world of therapy. He is shown in the living room of his home where mementos of his travels, along with that of his wife, adorn the wall. 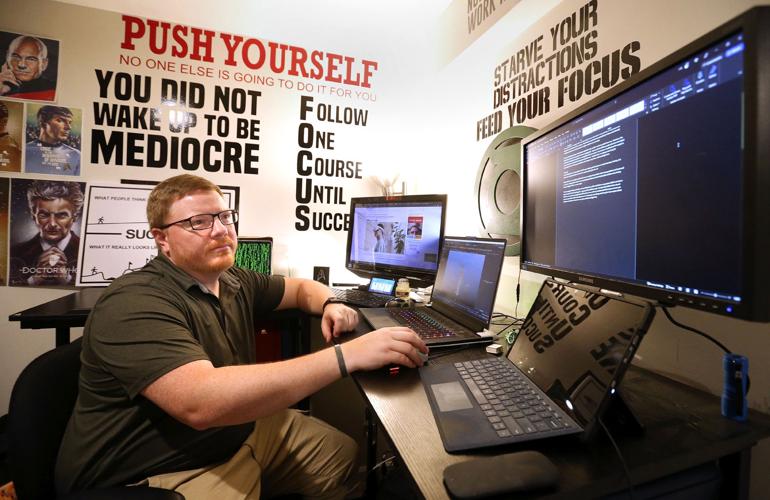 Military veteran and Shenandoah University student JD Oldaker of Stephenson is working on a business that introduces virtual reality to the world of therapy.

Military veteran and Shenandoah University student JD Oldaker of Stephenson is working on a business that introduces virtual reality to the world of therapy. He is shown in the living room of his home where mementos of his travels, along with that of his wife, adorn the wall.

Military veteran and Shenandoah University student JD Oldaker of Stephenson is working on a business that introduces virtual reality to the world of therapy.

WINCHESTER — Entrepreneurship is alive and well in the Northern Shenandoah Valley.

That's the message local business startups are sharing when it comes to their experiences with the Shenandoah Community Capital Fund’s (SCCF) Startup Shenandoah Valley (S2V) program.

Since the first cohort was announced in December 2020, 13 startups in the region have participated in the program, which was initially funded with more than $1 million in GO Virginia grant money.

The program includes one-on-one virtual coaching and tailored mentoring and support on all aspects of running a successful business — such as raising capital, recruiting and retaining top talent and marketing and legal issues.

The most recent cohort, which ended in May, focused on technology-based startups.

Strasburg’s A.D. Carter, owner and operator of Retail VR, said S2V helped him focus on small details that play a big role in the business process.

“Those little ins-and-outs pieces that no one knows about, that's what keeps you going. Everyone only sees the results; they don’t see what it took to get there. They see milestone to milestone, but they don't know the intricacies along the way,” Carter said. "S2V actually made that process of getting from milestone to milestone that much easier.”

Most entrepreneurs in the program have a business and are seeking help on what do to next in terms of marketing or opening a second location.

JD Oldaker is in the process of developing a business that brings together virtual reality and therapy. He applied for S2V after meeting  SCCF Entrepreneurial Ecosystem Builder Ryan Hall at an SCCF-sponsored tech event.

"Most people in the program had a company that was developed and running," Oldaker said. "So, seeing where they're at and what they're having problems with will prepare me for the future. Being able to state your problem or where you're at with your company and get feedback from an entire group was great. I think having nine or so different sets of eyes on one problem, that’s a tremendous benefit.

For example, Oldaker discovered during the program that his original business name was already taken, sending him back to the drawing board.

Carter said he learned how to better handle a situation he encountered where someone he knew replicated his business process and became a direct competitor.

"You have to know as a startup that you don't know everything," Carter said. "You're going to have some hiccups along the way."

With the last cohort focusing on technology, Carter and Oldaker said it was interesting to learn about each business owner's ideas and how they were implementing or planned to implement them.

Carter’s Retail VR specializes in 3D modeling of businesses that can be used for marketing, mapping, facilities management, emergency services and more.

Right now, he uses the technology to market businesses on main streets throughout Shenandoah County.

Oldaker wants to use virtual reality to help mental health patients. Right now, he said VR is used to help post-traumatic stress disorder, anxiety and phobias, but he's looking more at childhood trauma that impacts an adult over time.

Oldaker said S2V helped him see the big picture about where he needs to go.

“Most successful businesses have two people — the big idea guy and the developer. I know what areas need to be attractive to be successful, now it's about finding out how to create that vision. I've got to find a partner that’s going to help me push this out to the world," he said. “All of the nitty gritty details about forms and documents, that's all stuff that you can find guidance on. I worry more about how to market it, how to build it and how to push it. Those were things I learned during the program.”

S2V is currently accepting applications for Cohort 5, which will run from Sept. 5-Oct. 27. Business owners looking to grow and expand their market in traded sectors are encouraged to apply.

“Submit an application. Don't second-guess it; just submit the application,” Carter said. "Even if you don't get in, you're better off for trying. You're guaranteed to fail if you don’t do anything. But you have a 50-50 shot at success if you try.”