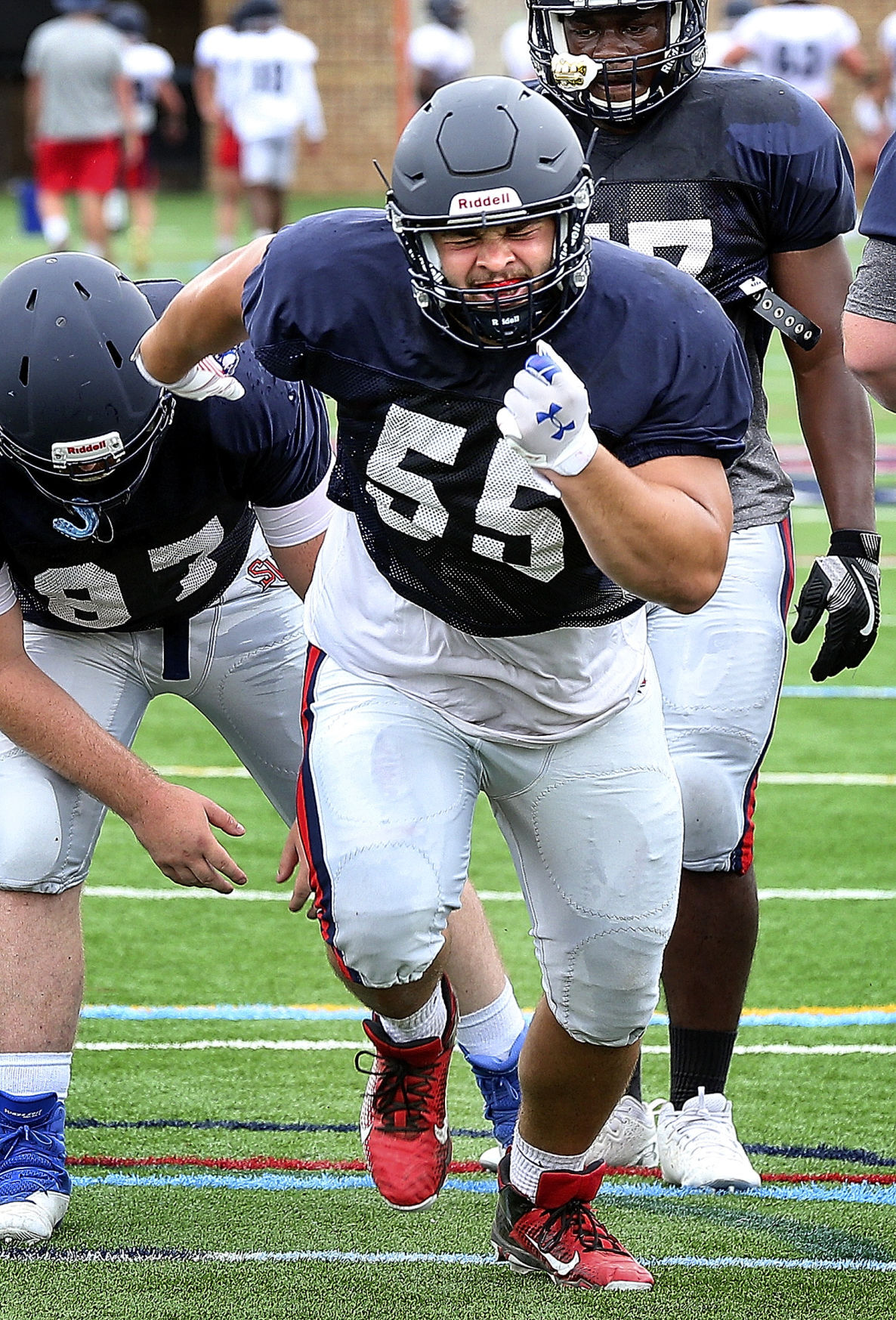 Shenandoah University defensive tackle Mason Caldwell runs during drills in a preseason practice. The four-year starter leads SU with his words and work ethic, and he’s one of the statistical leaders in the Old Dominion Athletic Conference with 15 tackles (five for loss) and two sacks. 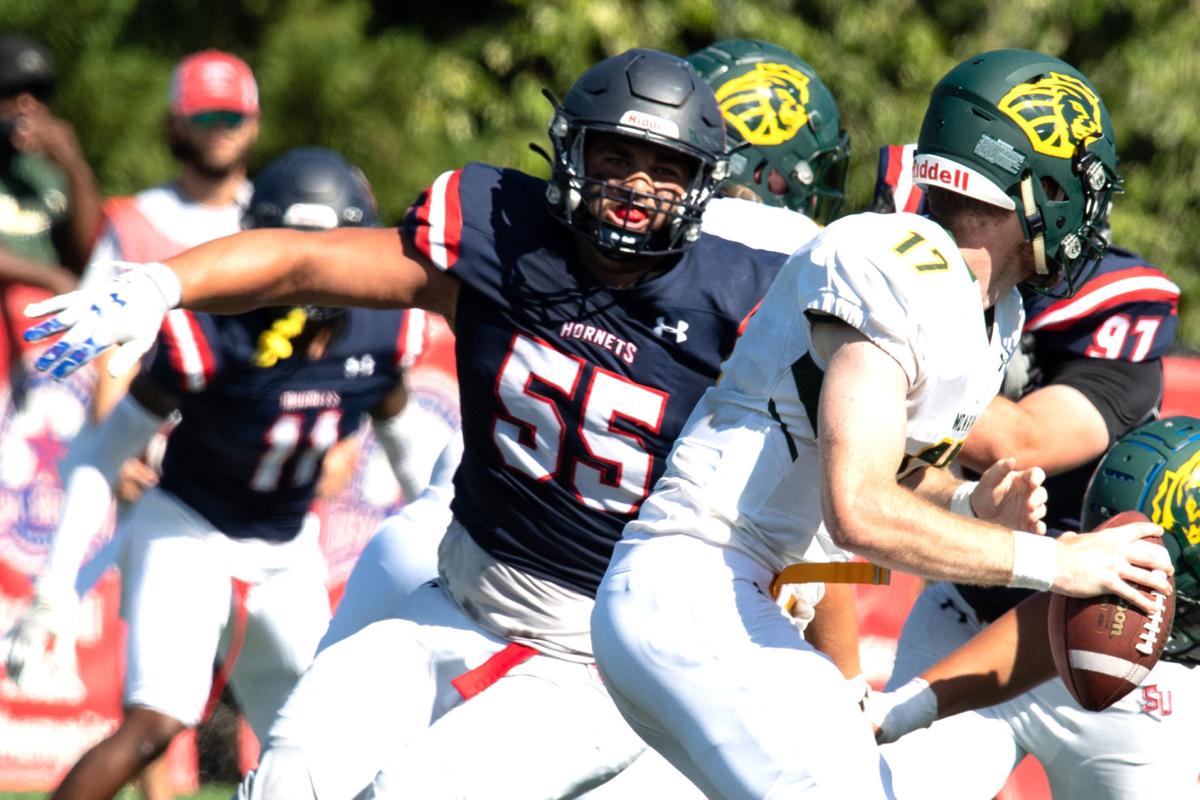 Shenandoah University senior defensive tackle Mason Caldwell pressures Methodist quarterback Brandon Bullins (17) in the season opener on Sept. 4 at Shentel Stadium. This past Saturday, Caldwell had nine tackles (four for loss) and two sacks at N.C. Wesleyan. He was named to the D3football.com Team of the Week on Tuesday.

Shenandoah University defensive tackle Mason Caldwell runs during drills in a preseason practice. The four-year starter leads SU with his words and work ethic, and he’s one of the statistical leaders in the Old Dominion Athletic Conference with 15 tackles (five for loss) and two sacks.

Shenandoah University senior defensive tackle Mason Caldwell pressures Methodist quarterback Brandon Bullins (17) in the season opener on Sept. 4 at Shentel Stadium. This past Saturday, Caldwell had nine tackles (four for loss) and two sacks at N.C. Wesleyan. He was named to the D3football.com Team of the Week on Tuesday.

WINCHESTER — During the Shenandoah University football team’s preseason camp in August, the Hornets’ offensive linemen might have been the happiest for the arrival of the team’s scrimmage days against other colleges.

“He’s at an inside position where a lot of times you’re not getting blocked by a single person, and he’s still causing havoc for everybody. We deal with him all camp, and it was fun to see him wreak havoc on some other guys.”

That pattern hasn’t stopped during the regular season.

A defensive tackle usually has done his job if he occupies offensive linemen so his teammates can make the tackle. But if a defensive tackle can’t be blocked, well, he might as well take the ball carrier down himself, and Caldwell is doing that at a high rate.

In Saturday’s 30-21 road win in Rocky Mount over North Carolina Wesleyan, Caldwell led the Hornets in tackles (nine, including eight solo), tackles for loss (four) and sacks (two) and broke up a pass as SU held the Battling Bishops to 69 rushing yards on 29 attempts. The Hornets had 10 total tackles that resulted in 28 lost yards for NCWC. He was named to D3football.com’s national Team of the Week on Tuesday.

For the season, Caldwell — who can also play on the edge of the line — ranks second on the Hornets (2-0) with 15 tackles. He’s 10th in the Old Dominion Athletic Conference in tackles per game (7.5), tied for second in solo tackles (10), tied for first in TFLs (five), second in yards lost on TFLs (15) and tied for second in sacks (two).

The statistical contributions of the Martinsburg (W.Va.) resident and Spring Mills High School graduate are important to SU’s success. But his leadership is what truly resonates within the team. The four-year starter is a two-time captain and someone that 18th-year SU defensive line coach Kalvin Oliver calls “arguably the greatest leader I’ve ever coached.”

“He’s always here for the team,” Oliver said. “His teammates see the way he works, and they follow.”

“I’ve been around college football for 25 years, and he’s probably as good and dynamic leader as I’ve ever been around,” McCullough said. “He’s next level. He’s hard-working, but he’s also demanding of his teammates. He’s just an outstanding, high character individual who works hard at everything he does.”

The sports management major is SU’s nominee for the National Football Foundation’s William V. Campbell Trophy. The Campbell Trophy recognizes the outstanding college football player on the field, in the classroom (Caldwell was an Academic All-State selection last year and has a 3.5 GPA) and in the community (mentoring at Redbun Run Elementary School is one of the activities Caldwell has participated in).

“When me and him first got here, I thought he was an upperclassmen,” Rogers said. “He came in as a leader. He makes sure everybody’s doing the right things on the field and off the field.”

”If we’re having a lull in practice or anything like that, he’s one to pick us up and get things going for us,” SU senior quarterback Zack Mathis said.

The players are the ones who vote for the team captains, and Caldwell said it means a great deal that his teammates have so much respect for him.

“I feel like I work extremely hard to try and show these guys every day how to be a Hornet, how to be a student-athlete,” said Caldwell during an interview in the preseason. “I just want to be great, and it means a lot for them to recognize that.”

Oliver had a chance to work with Caldwell in high school during SU’s annual football camps, so he knew how hard Caldwell worked and had high expectations for him.

He didn’t necessarily expect him to make such a big impact so quickly, however. Caldwell was inserted into the lineup right away as a nose guard, and he recorded 34 tackles (18 solo) while starting every game his freshman season.

Caldwell said the transition from high school was a big adjustment, but his confidence “shot through the roof” in the third game of the year when he made the first two tackles of the second half against a powerful Hobart team.

Caldwell had a productive freshman year, but he knew he had to get stronger for better production in the future.

“Just being smaller then, I was getting pushed around a lot,” Caldwell said. “I feel a lot more comfortable now.”

Caldwell weighed 250 pounds as a freshman, and over the last three years he’s added 30 pounds to his frame in part by dedicating himself to the weight room. Caldwell’s squat has improved by 150 pounds since he arrived at SU to 560 pounds, and he also benches 375 pounds.

“Just a warrior in the weight room,” Yoder said.

Rogers said he’s been impressed with the swim moves that Caldwell has developed to get past offensive lineman, but his sudden explosiveness is the backbone of his success.

“He’s a combination of power and speed,” McCullough said. “He’s very good with a flat back and just pushing offensive linemen back into the backfield. That’s kind of his go-to.”

“His sophomore year, he started doing things like a seasoned veteran,” Oliver said. “Offenses are always trying to get you into bad situations. He started seeing those things, and it’s very hard to get him out of position.”

A virus didn’t have any luck knocking Caldwell off his feet his sophomore year either. Oliver said Caldwell had a bad sinus infection when the Hornets played Guilford on a hot September day in 2019. When the game was over, Caldwell had a team-high nine tackles (2.5 for loss) and two sacks, and he was named to D3football.com’s national Team of the Week for the first time.

“He had a ridiculous day,” Oliver said. “He did not feel his best, but that didn’t stop him from helping his team.”

Caldwell had 40 tackles (8.5 for loss) three sacks and two fumble recoveries as a sophomore. As a junior in the pandemic-delayed five-game spring season, Caldwell earned second team All-ODAC honors after recording 28 tackles (3.5 for loss), one sack and two pass breakups.

And while it’s only been two games so far, Caldwell’s senior season is shaping up to he his best yet.

“I’m just getting new weapons every day with different moves that Coach Oliver teaches us, and just learning the game even more,” Caldwell said.

Caldwell is part of a defensive line for which the Hornets have extremely high hopes.

Prior to SU’s 10 tackles for loss on Saturday, the Hornets stopped Methodist twice on fourth-and-1 Wildcat runs twice inside the SU red zone in the second half in the season opener.

SU then clinched the game with another turnover on downs after the Monarchs had first-and-goal from the SU 9 in the final minute. Out of timeouts, Methodist threw incomplete from the 3-yard line on the final two plays, with the final lofted pass falling harmlessly out of bounds to the right with 39 seconds left.

“I thought it was kind of weak of them to try and go out there [toward the sideline],” Caldwell said after the game. “It just shows that we’re kicking tail on the inside, and they didn’t want anything to do with that.”

With Caldwell leading the way, the Hornets hope the entire team can maintain that fire and edge all season.

“In this day and age, you don’t find the kids that are as great leaders because I think kids are really not comfortable with getting on their peers,” Yoder said. “That’s not him. If you’re not doing what you need to be doing, whether it’s in the classroom, in the weight room or on the field, he has no problem getting on you in a positive way and telling you, ‘if you’re going to be a part of this team, you’ve got to pull your weight.’