Skip to main content
You are the owner of this article.
Edit Article Add New Article
You have permission to edit this article.
Edit
Login
Home
News
Opinions
Sports
Obituaries
Life
Advertise With Us
Classifieds
Jobs
Events
Digital Replica
1 of 2 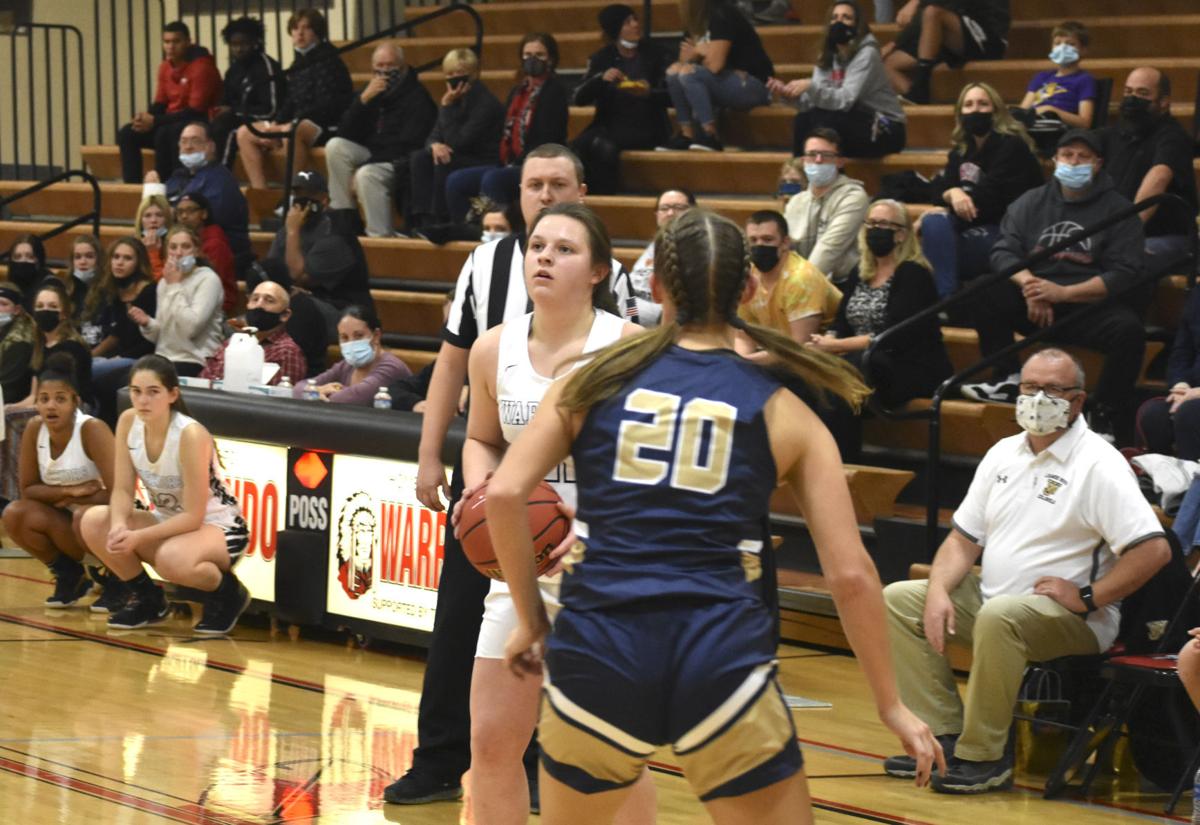 Sherando junior Grace Burke prepares to shoot in the first quarter as James Wood’s Aubrey Grove defends. Burke missed on this attempt, but she made 7 of 10 field goal attempts over the last three quarters and sank four 3-pointers as the Warriors won 46-36 on Tuesday in the season opener for both teams at Sherando. 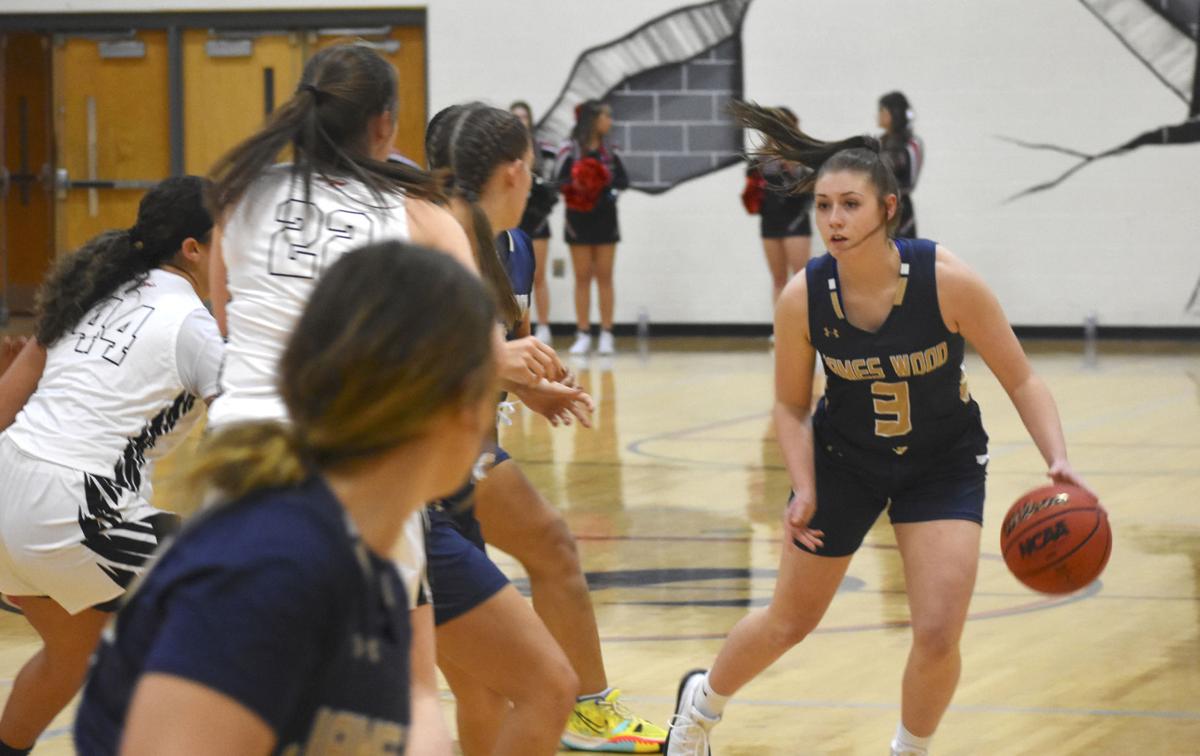 James Wood's Brynna Nesselrodt (3) had 14 points and seven rebounds in the Colonels' 46-36 loss at Sherando on Tuesday.

Sherando junior Grace Burke prepares to shoot in the first quarter as James Wood’s Aubrey Grove defends. Burke missed on this attempt, but she made 7 of 10 field goal attempts over the last three quarters and sank four 3-pointers as the Warriors won 46-36 on Tuesday in the season opener for both teams at Sherando.

James Wood's Brynna Nesselrodt (3) had 14 points and seven rebounds in the Colonels' 46-36 loss at Sherando on Tuesday.

STEPHENS CITY — As people waited outside Sherando High School on Tuesday night while a fire alarm that went off during the boys’ game was investigated by the fire department, one girl decided that a member of the Warriors girls’ team had to be the cause.

“It’s because of [Grace] Burke,” she said. “Burke is literally on fire.”

In the first game of Tuesday’s varsity basketball doubleheader, the second quarter saw Burke’s shooting touch blaze while James Wood’s turned ice cold. The Warriors’ play only got better in the second half as they went on to rally for a 46-36 win in the season and Class 4 Northwestern District opener.

Sherando coordinator of student activities Jason Barbe said it wasn’t clear what caused the fire alarm to go off during the first quarter of the boys’ game. After a pretty alarming first quarter in their game, the Warriors girls responded to give the team plenty to smile about during the Senior Night ceremonies that were held in between games.

James Wood led 15-5 after one quarter and 17-5 at the 7:02 mark of the second quarter on a basket by Gabriella Valentinetti.

But Burke, a junior guard, scored all of her game-high 24 points in the last three quarters. She connected on each of her three 3-point attempts in the second quarter to help the Warriors cut their deficit to 21-16 at halftime, then added 15 more points in the second half on 4-of-7 field goal shooting (she added another 3-pointer) and 6-of-6 free throw shooting.

Meanwhile, the Colonels missed 24 straight field goal attempts after Valentinetti’s second quarter bucket, a string of misses that wasn’t broken until Aleeya Silver’s basket with 6:13 left in the game. James Wood only trailed 34-27 after that basket, but the Colonels could never get closer than six points for the remainder of the game. James Wood made just four of its last 35 shots.

Sherando senior forward Ella Carlson said the Warriors knew they were a better team than they showed in the first eight minutes.

“We knew that our skill level could overtake them,” said Carlson, who had seven of her nine points after halftime and six second-half rebounds. “We all were in a zone after the first quarter, because we did not want to lose.”

Burke felt the Warriors struggled with James Wood’s zone traps early, but Sherando handled the Colonels’ defense better as the game went on.

“I think we did very good against adversity and we didn’t break down with the pressure,” Burke said. “[After the first quarter], we just said, ‘Get out of your heads and let’s just go play basketball.’”

Sherando coach Brooklyn Wilson said runs are going to take place in basketball, so she emphasizes to her team that they need to stay on an even keel when their opponent has a strong streak of play, because the Warriors will have one as well. With Burke’s 3-point marksmanship, Sherando is definitely capable of putting hot spurts together.

“She obviously is a huge lift for us on offense,” Wilson said. “We had other people come in the game, freshman all the way to senior, who stepped up and got stops and made shots. But it’s definitely a morale booster when she knocks down a couple 3’s.”

Burke’s 3-pointer with 3:50 left in the third quarter gave the Warriors the lead for good at 23-21. Her 3-point shooting helped Sherando on the scoreboard, but Burke felt like it helped on the defensive side as well.

“It brought up our energy, which helped us on defense to get some stops and get some momentum,” Burke said.

Sherando held James Wood without a field goal for more than 16 minutes, and also made sure the Colonels, who made 8 of 13 free throws during the second and third quarters, didn’t get too many second chances. Sherando had a 33-23 rebounding edge for the last three quarters.

“We wanted to pay attention to the details,” Wilson said. “Knowing where their shooters were, getting a good contest, but then finishing with a solid box out. It’s something we struggled with a little bit in both our scrimmages. It’s good to see the girls took that and did a really good job of finishing the play tonight.”

Sherando led 28-25 after three quarters and knocked down all nine of its free throws in the fourth quarter.

James Wood head coach Sanford Silver felt his team got some good looks at the basket at times, but the Colonels just couldn’t finish.

“I think we had a lot of opportunities that we left on the court,” said Silver, who also felt James Wood didn’t gel as well on defense in the second half as it did in the first half. “I think we screened very well tonight to get some open shots, and some of them just didn’t go in.

“And a couple of those missed shots, when they got them and transitioned and scored, I think was a big difference and kind of changed the tone of the game.”

After not having fans in the stands last year due to COVID-19 restrictions, Carlson said it meant a lot to win on Senior Night in front of a large crowd on Tuesday.

“It’s great to go out there and play like we know how to play,” she said.

The Warriors will next compete in the Hampshire (W.Va.) Tournament on Friday and Saturday. James Wood hosts Oakton Thursday.