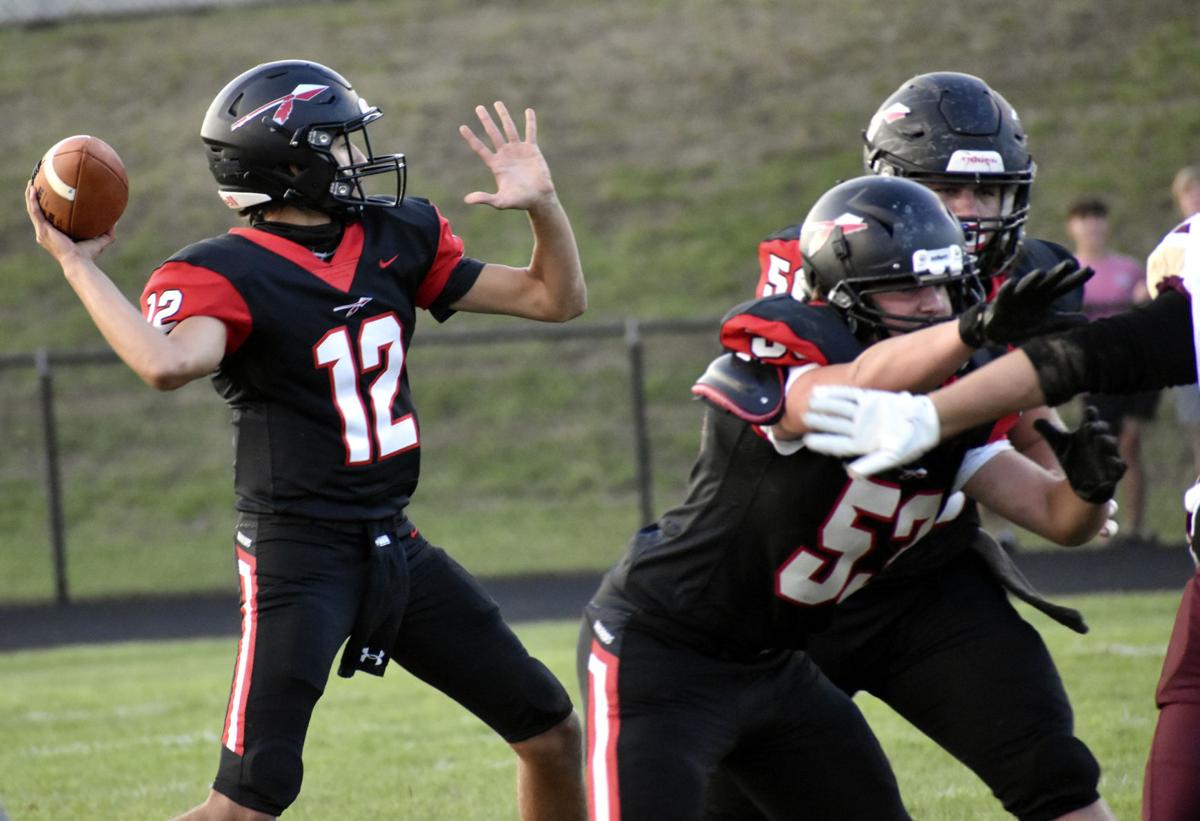 Sherando quarterback Dylan Rodeffer looks to help the Warriors to their second straight win overall and their third straight win against Millbrook when the Frederick County rivals meet at Arrowhead Stadium tonight. 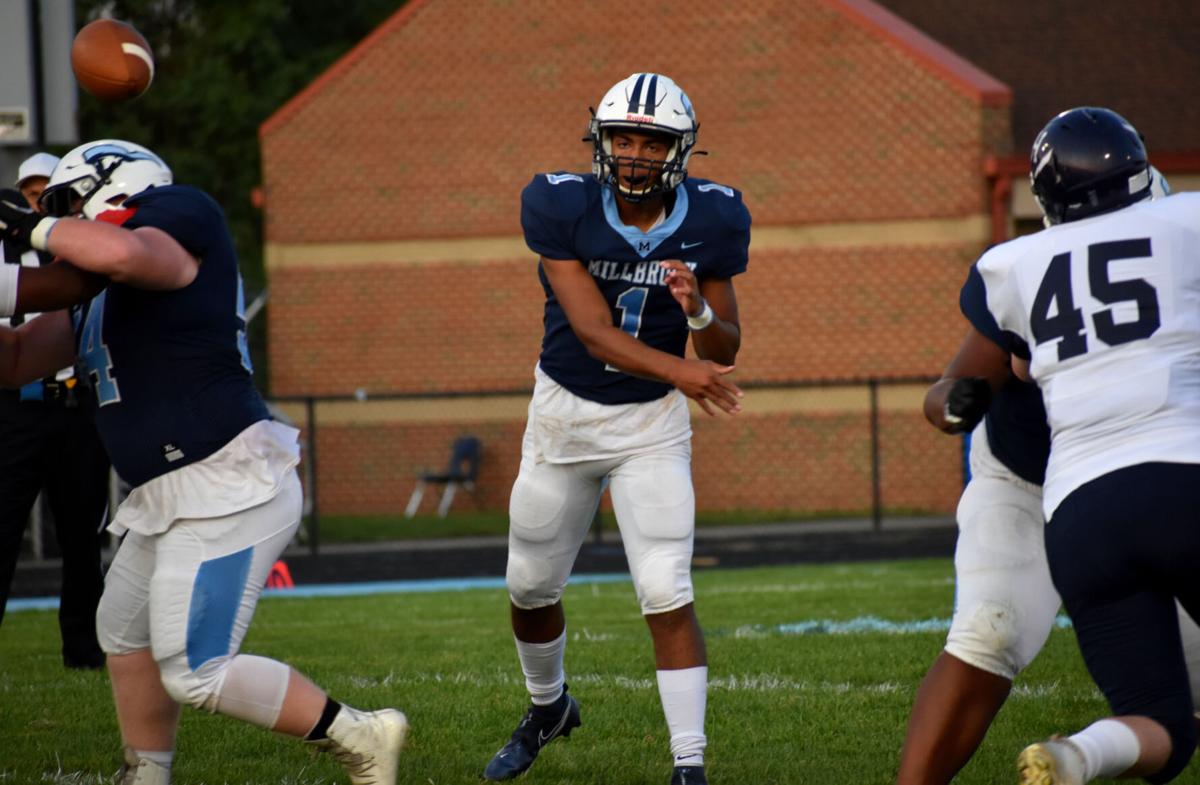 Quarterback Detric Brown and Millbrook will try for its first win of the season tonight at Sherando. The Pioneers are playing their first game in two weeks after last week’s game against Potomac Falls was canceled.

Sherando quarterback Dylan Rodeffer looks to help the Warriors to their second straight win overall and their third straight win against Millbrook when the Frederick County rivals meet at Arrowhead Stadium tonight.

Quarterback Detric Brown and Millbrook will try for its first win of the season tonight at Sherando. The Pioneers are playing their first game in two weeks after last week’s game against Potomac Falls was canceled.

Sherando and Millbrook enter tonight’s 7 p.m. Class 4 Northwestern District football game at Arrowhead Stadium with just one win between them, and the Pioneers haven’t played in two weeks after having to unexpectedly cancel last Friday’s game at Potomac Falls.

It’s not a situation the two historically successful programs wanted to be in after four weeks, but it’s hard not to feel good when you know you’ve got a chance to put some thunderous hits on your county rival at the end of the fifth week. Millbrook coach Josh Haymore said spirits are high despite the Potomac Falls cancellation.

“It’s Sherando week,” Haymore said. “It stinks we didn’t get to play Potomac Falls. But we move on to the next week, the next opponent. Let’s go.”

The circumstances that led to the Potomac Falls cancellation will leave Millbrook — which is 0-3 for the first time since 2004 — without some of its varsity players for tonight’s district opener. The Pioneers adjusted by adding some JV players.

While Millbrook missed out on a opportunity for its first win last week, Sherando (1-3, 0-1 district) avoided its first 0-4 start since the 2000 season with a gutty 49-43 win over Musselman (W.Va.). The Warriors jumped out to a 28-8 lead midway through the second quarter and led 49-30 with 10:22 to go. The Applemen rallied but Sherando made a late goal-line stand to preserve the win.

“Anytime you get a win, I think it helps [with confidence],” said Smith on Wednesday. “I think we’ve had a great week so far of preparation. [Tuesday’s] practice I thought went exceptionally well, and hopefully we just continue to build off that the rest of the week and play well on Friday.”

Haymore said stopping Sherando’s running game will be key for the Pioneers. The Warriors only had 234 yards on the ground through three games but exploded with 362 against Musselman with Cam Sullivan gaining 238 yards and scoring three touchdowns on 28 carries.

“The Sullivan kid is pretty darn good,” Haymore said. “Him and [running back Gavyn] Blye, they run hard.”

Smith said it’s taken some time for a young Warriors team to get accustomed to the first-year head coach’s changes, and the Musselman game showed that growth.

“Terminology is one major [adjustment],” Smith said. “Coach [Nick] Manuel and Coach [Trey] Blanford are both new on the offensive line, so [the players are] getting used to new coaches and the way they explain and teach things, and the way they term things.”

In addition to Sullivan, the Warriors are also led by quarterback Dylan Rodeffer (37 of 89 for 575 yards, six touchdowns and three interceptions) and wide receiver AJ Santiago (20 catches, 344 yards, three TDs).

Millbrook’s offense is led by quarterback Detric Brown (42 of 87, 494 yards, five TDs, three INTs; 154 yards rushing) and running back AJ Harrison (28 carries, 148 yards, one TD). Haymore said he expects to see a 4-3 defense primarily from Sherando after mainly seeing a 3-4 defense in two defeats to the Warriors in the spring.

Though it was an impressive showing for Sherando’s offense last week, the Warriors are still giving up 44 points and 502.5 yards per game.

“We’ve got to get lined up correctly and we’e got to play our assignments correctly,” said Smith, whose defense features senior linebacker Aydan Willis (50 tackles). “Those are the two biggest things we’re emphasizing on that side of the ball. They’re getting better each week. I think they’re really close to putting together a good performance.”

Smith said it will be an adjustment for Sherando playing a team that puts as much emphasis on the passing game as Millbrook. The Pioneers are averaging 29 pass attempts per game while the Warriors first four opponents averaged 18 per game.

Haymore said the biggest key for Millbrook will be playing with more discipline in terms of penalties, which the Pioneers hoped to demonstrate against Potomac Falls.

“We’ve got to eliminate those penalties,” said Haymore, whose team is averaging 10 per game. “You eliminate some of those penalties in each one of those games, those are good ballgames. We shot ourselves in the foot by stopping drives because we had penalties.”