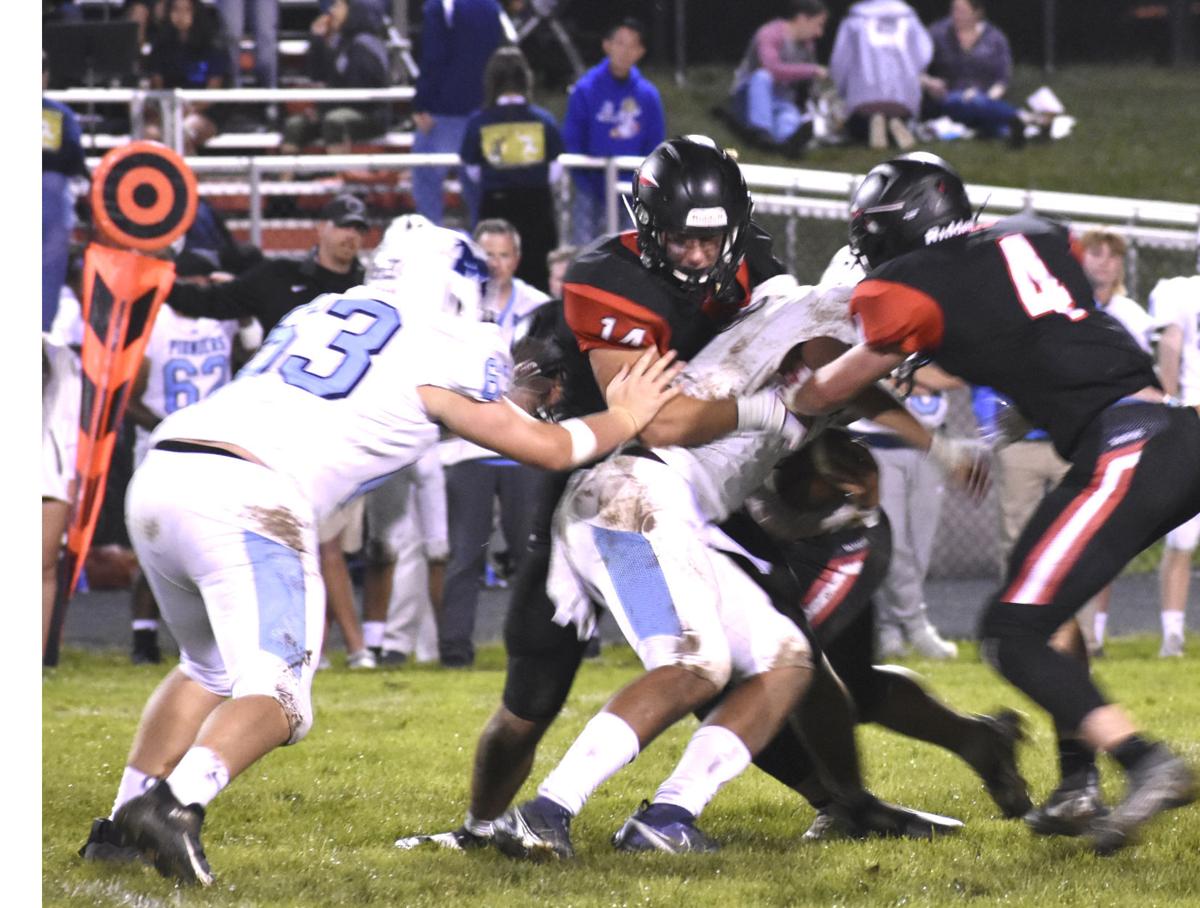 Sherando’s Trey Kremer (14) and Nick Luttrell wrap up Millbrook’s Detric Brown in the Warriors’ 39-14 win on Friday night at Arrowhead Stadium. Kremer had 3.5 sacks as Sherando held Millbrook to 135 yards. 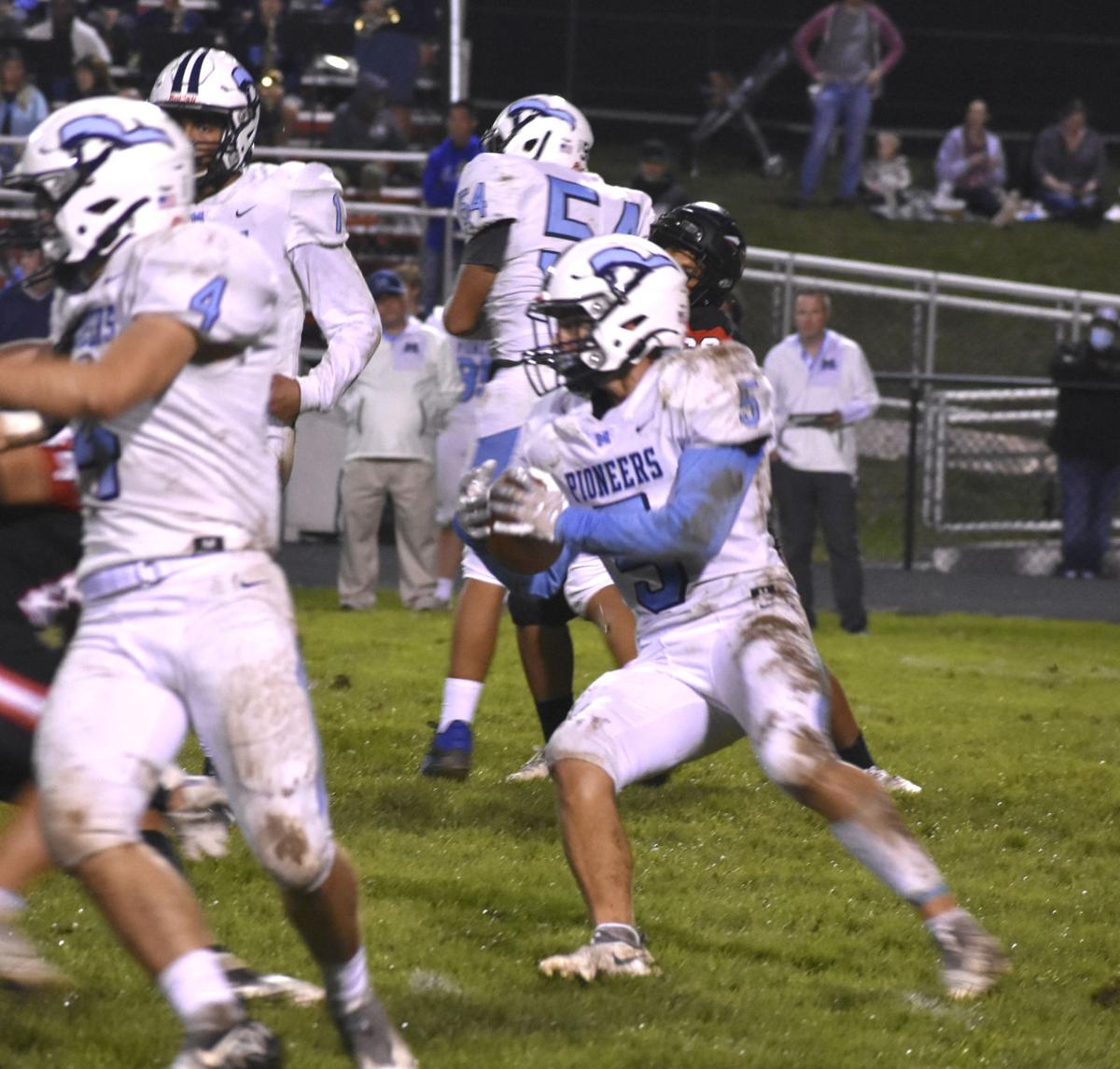 CJ Standen starred for Millbrook on Friday against Sherando, returning a kickoff 68 yards for a touchdown, returning an interception 46 yards and catching four passes for 81 yards. His 49-yard reception to the Warrior 1-yard line set up Millbrook's first touchdown. 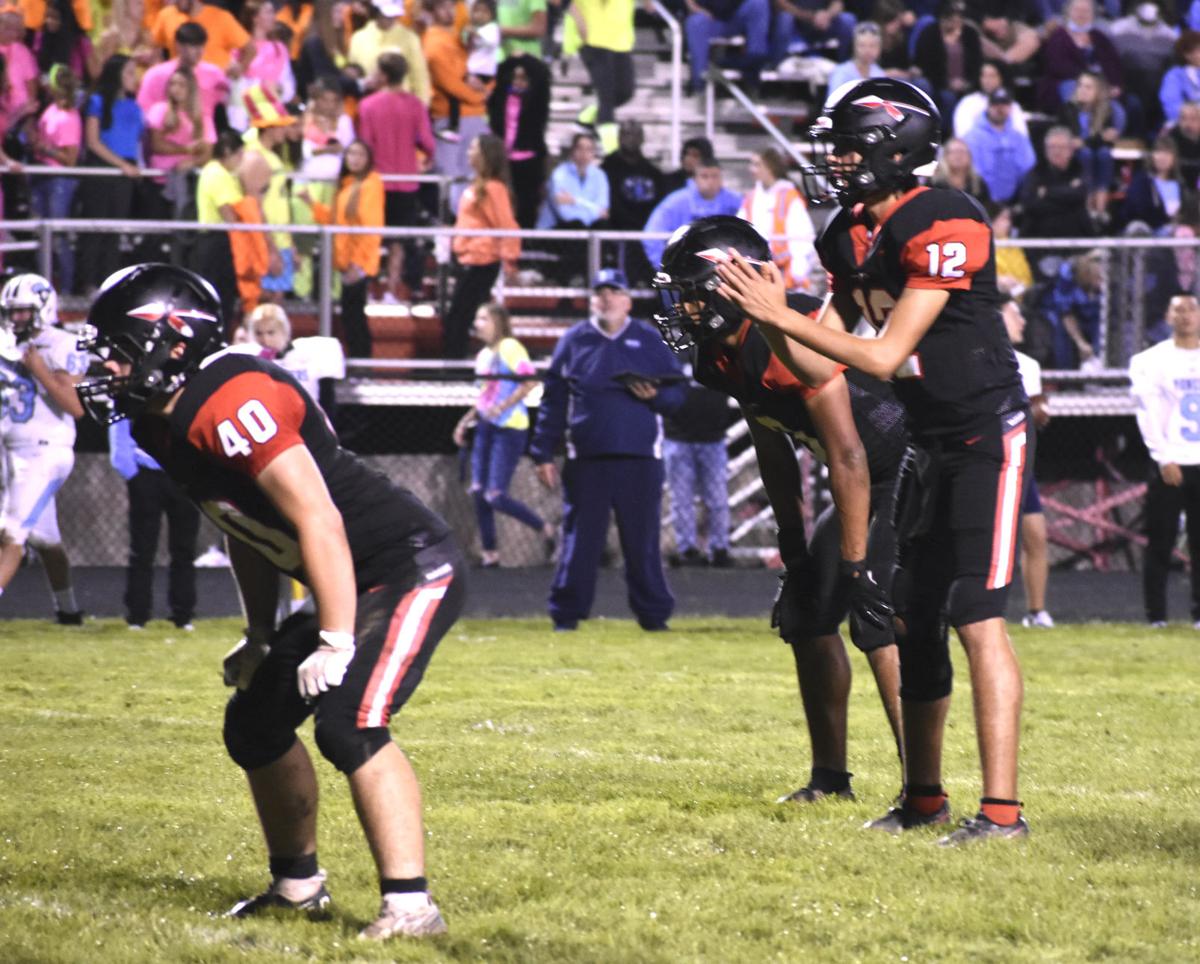 Dylan Rodeffer (12) waits for the snap next to running back Cam Sullivan and behind Brady Largent. Sullivan, who rushed for 188 yards and three touchdowns last week against Millbrook, will look for more openings against Riverside tonight.

Sherando’s Trey Kremer (14) and Nick Luttrell wrap up Millbrook’s Detric Brown in the Warriors’ 39-14 win on Friday night at Arrowhead Stadium. Kremer had 3.5 sacks as Sherando held Millbrook to 135 yards.

CJ Standen starred for Millbrook on Friday against Sherando, returning a kickoff 68 yards for a touchdown, returning an interception 46 yards and catching four passes for 81 yards. His 49-yard reception to the Warrior 1-yard line set up Millbrook's first touchdown.

Dylan Rodeffer (12) waits for the snap next to running back Cam Sullivan and behind Brady Largent. Sullivan, who rushed for 188 yards and three touchdowns last week against Millbrook, will look for more openings against Riverside tonight.

STEPHENS CITY — During warmups for Friday’s football game at Arrowhead Stadium, it was obvious Millbrook was going to have an uphill battle on its hands based on which players weren’t dressed to play.

Sherando couldn’t concern itself with the Pioneers’ roster situation, only with how it played. And the Warriors did well to make sure that Millbrook faced an uphill battle on the scoreboard for virtually the entire game.

The Warriors used a quick tempo and a dominant running game to score touchdowns on three of their four possessions in the first quarter for a 20-0 lead, and Sherando’s defense had by far its best game of the year and made stops just about every time it needed one.

The end result was a 39-14 Warriors win in which Sherando (2-3, 1-1 Class 4 Northwestern District) outgained Millbrook 448-135. The Pioneers (0-4, 0-1) — who had to cancel last week’s game with Potomac Falls — were without at least 14 players on Friday for multiple reasons. Several people who didn’t play could have helped with line play and line support.

“This feels great, especially since it’s a district win,” said Sherando senior running back Cam Sullivan, who scored all three of those touchdowns in the first quarter. “It’s awesome. We’re getting better every week.”

Sullivan scored from 4, 6 and 4 yards out in the first quarter and ran 30 times for 188 yards overall to lead a Warriors team that recorded its second straight 300-yard rushing performance (312 yards on Friday on 56 attempts).

Sherando’s defense (502.5 yards per game allowed coming in) also controlled the line of scrimmage, snuffing out jet sweeps with regularity and forcing Millbrook quarterback Detric Brown to move his feet a lot and throw quickly. Brown completed 12 of 23 passes for 143 yards with three interceptions, and he was tackled nine times for loss (five of them sacks, with junior lineman Trey Kremer credited with 3.5 of those). The Pioneers had minus-8 yards on 29 rushing attempts overall.

The Pioneers did well to keep themselves in the game and were within 27-14 on CJ Standen’s 68-yard kickoff return and Brown’s two-point run to open the second half. But Sherando senior linebacker/running back Aydan Willis knocked the ball away from Brown as he looked to pass and recovered the fumble on fourth-and-3 from the Warrior 29 with 6:51 left in the third quarter, and Millbrook couldn’t get closer.

Willis (10 carries, 56 yards) — who had eight straight runs totaling 52 yards and scored from four yards out to complete the scoring with 16 seconds left — loved the play of Sherando’s offensive line.

The Warriors took the opening kickoff and had a nine-play, 62-yard TD drive that was capped with Sullivan’s four-yard TD run with 8:55 left in the first quarter. Sullivan ran seven times for 30 yards on the drive in which Sherando established a pattern in the first half of getting to the line quickly and snapping it.

Dylan Rodeffer (9 of 14 for 133 yards, a perfect 26-yard TD throw into the end zone to AJ Santiago to beat double coverage with 39 seconds in the first half to make it 27-7) completed two short throws toward the sideline for 32 yards to Santiago (five catches, 83 yards) to also help move the Warriors along on the opening drive.

“The offensive line, they dominated the whole game,” Willis said. “They really stepped up this week.”

The starting unit features junior center Storm Miller, senior Jamie Tinsman and sophomore Ethan Gonzalez at the guards and senior Fabian Kimbrough and sophomore Will Schneider at the tackles.

“Those guys don’t have a ton of experience on the offensive line, and they’re starting to gel a little bit together now as we’re getting some games under our belt,” Sherando coach Jake Smith said. “I think they have a ton of potential if they work really hard. They take coaching, they’re smart, they make adjustments. They’re a great group.”

Kimbrough is also a starter on the defensive line, and the whole unit made an impact on Friday. Sherando forced punts on Millbrook’s first two possessions and Willis made the first of two fumble recoveries at the Pioneers 38 to set up the Warriors’ third touchdown, a four-yard run by Sullivan with 20 seconds left in the first quarter. Cody Crittenden (3 of 6 on extra points) knocked in the point after to make it 20-0.

Linebacker Josh Metz had 11 tackles (three for loss) and Brady Hamilton, Gavyn Blye and Zach Symons each had interceptions for Sherando.

“The guys are just really working and getting comfortable with the schematic of our defense,” Smith said. “I could see the light at the end of the tunnel early on. We just haven’t really played a complete game on that side of the ball. We were just a few things away. I told them I thought tonight was going to be the night they have a good performance based off the week of practice that they had, and they certainly did.”

Willis’ forced fumble in the third quarter was certainly big. The Pioneers had driven 33 yards and seven plays and were threatening to make it a one-score game. Brown looked to make a quick throw toward the right sideline but Sherando had good coverage, allowing Willis to surge forward and knock the ball away.

The Warriors then finished the game with quarterbacks Kaden Bryant and Micah Carlson. Rodeffer had an ice bag on his knee after he slipped and threw incomplete on third down while on the move to end Sherando’s first possession of the second half. But Smith said he told but Bryant and Carlson — who has seen occasional playing time because of his running ability this year — that they would both play Friday.

Millbrook responded by grinding out 36 yards over 12 plays on its next drive to the Warrior 31. A bad snap and a slip from Brown ended the drive on fourth down, but the possession was yet another example of the impressive fortitude the Pioneers displayed throughout the game under difficult circumstances and minimal position depth.

“I’m proud of every single one of those kids who played football tonight,” said Millbrook coach Josh Haymore, whose team had three takeaways. “They played hard. They played for each other. They didn’t give up.

Standen shined particularly bright for Millbrook. In addition to his kickoff return, he returned a Rodeffer interception out of the end zone to the Pioneers 46 in the second quarter. He then turned a Brown pass into the right flat into a 49-yard gain to the Sherando 1, leading to a Brown TD run on the next play to make it 20-6.

The game was delayed for nearly 30 minutes while Stephens City Fire & Rescue and the Frederick County Sheriff’s Office dealt with a medical issue in the bleachers. (A person who was taken out on a rolling chair appeared to be alert.)

Millbrook will host Fauquier and Sherando will host Riverside next Friday.