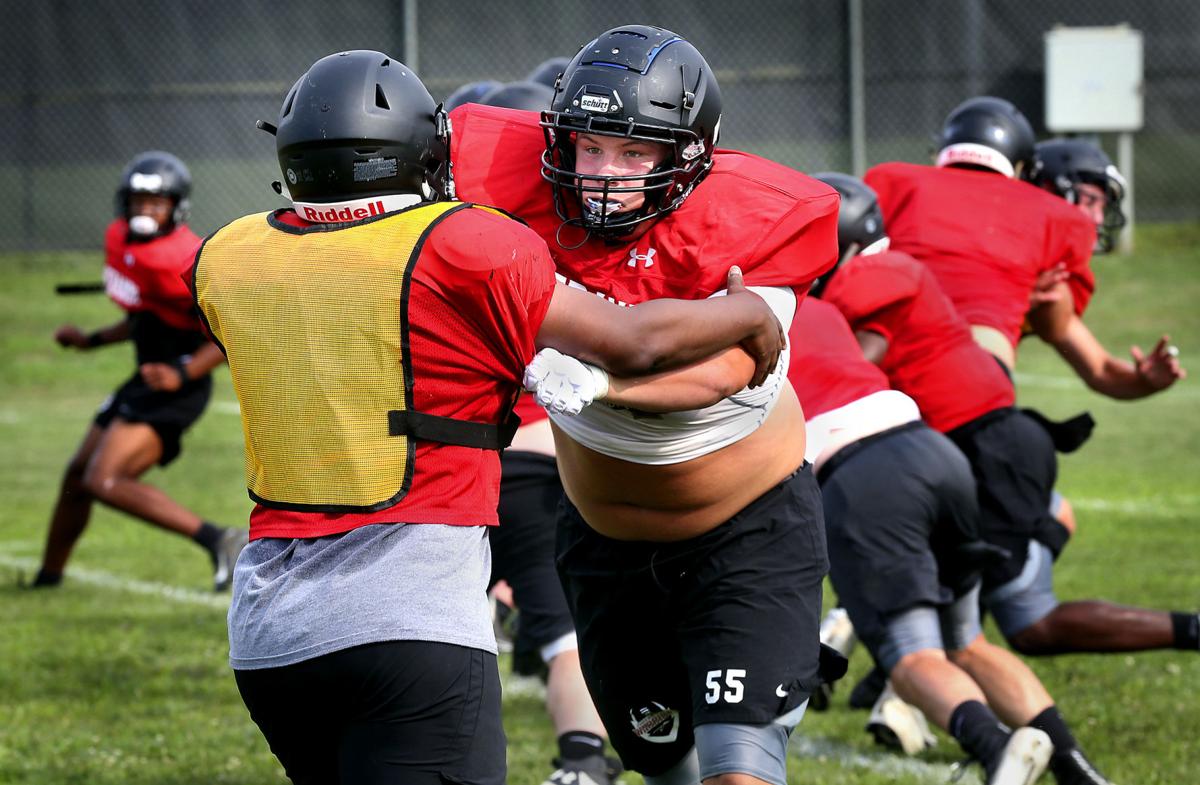 Sherando offensive lineman Keith Gouveia (right) signed a National Letter of Intent to play football on a full scholarship for the University of Richmond on Wednesday. 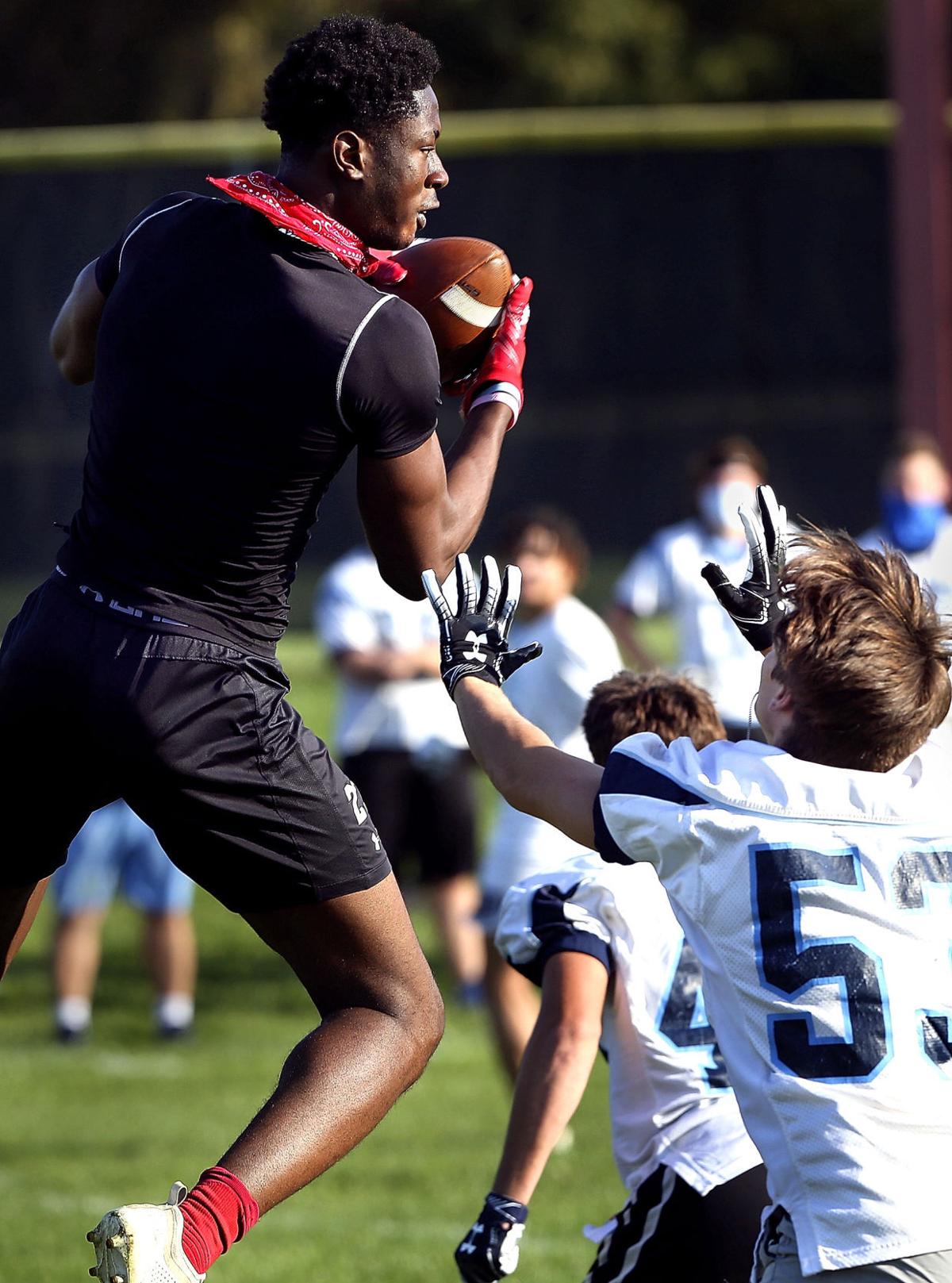 Sherando’s Keli Lawson (left) signed a National Letter of Intent to play football for Virginia Tech on a full scholarship on Wednesday. The Hokies are listing Lawson as a linebacker, but the versatile 6-foot-6 Lawson also could be a receiver or tight end on offense. 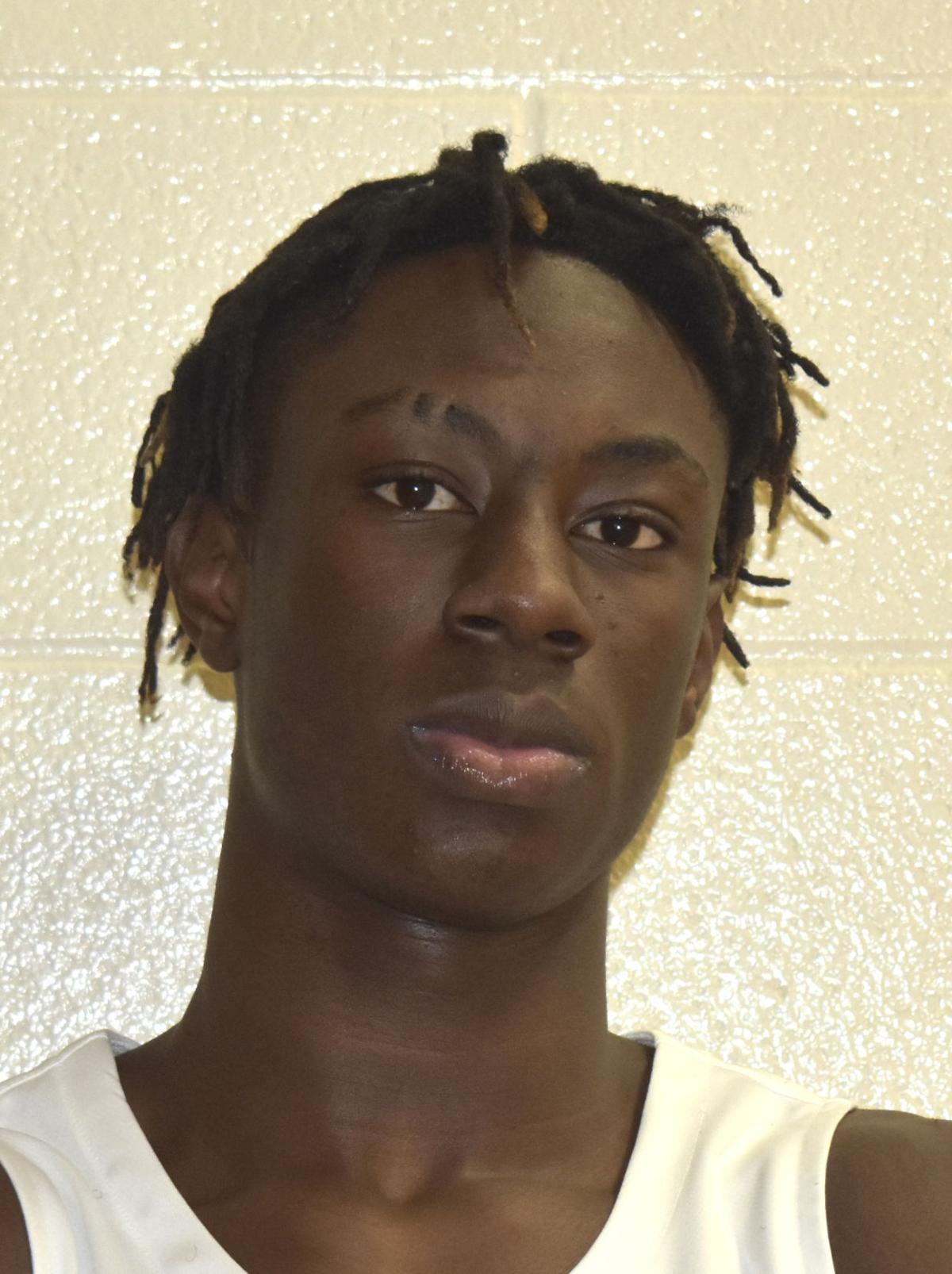 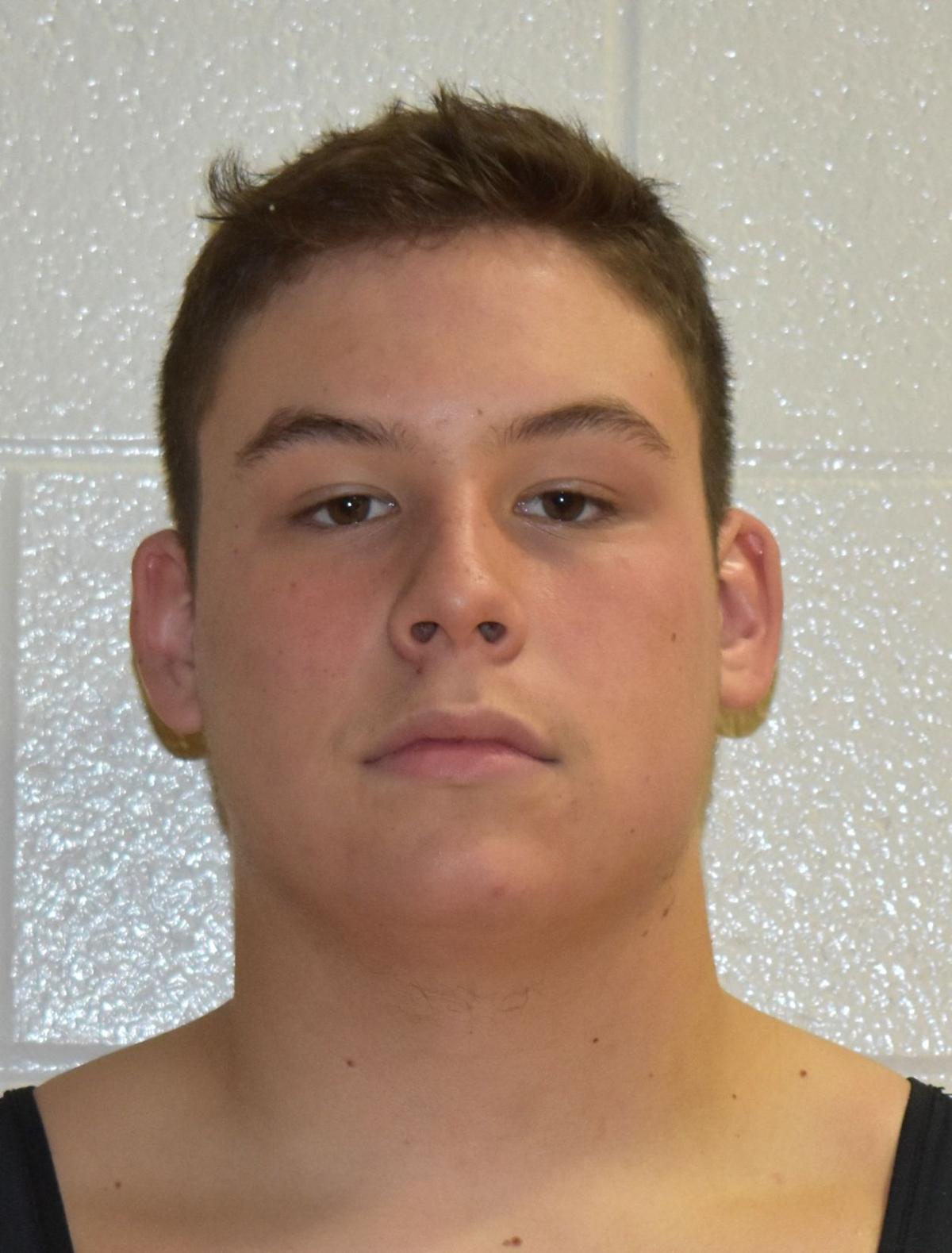 Sherando offensive lineman Keith Gouveia (right) signed a National Letter of Intent to play football on a full scholarship for the University of Richmond on Wednesday.

Sherando’s Keli Lawson (left) signed a National Letter of Intent to play football for Virginia Tech on a full scholarship on Wednesday. The Hokies are listing Lawson as a linebacker, but the versatile 6-foot-6 Lawson also could be a receiver or tight end on offense.

The Virginia Tech and University of Richmond football programs know Sherando High School well, and the two NCAA Division I institutions added to that relationship on Wednesday.

Outside linebacker/wide receiver Keli Lawson (Virginia Tech) and offensive lineman Keith Gouveia (Richmond) each signed a National Letter of Intent for full scholarships on Wednesday, the first day of the early signing period for NCAA Division I football.

Dylan Rivers (Sherando class of 2017) played in 29 games and made seven starts in three seasons as a linebacker at Virginia Tech and worked with the Hokies’ strength and conditioning staff in 2020 after retiring as a player due to a neck injury. Aaron Banks (class of 2018) is a redshirt sophomore defensive back at Richmond who has played in nine games (three starts) in two seasons, and Jabril Hayes (class of 2020) is a freshman defensive back with the Spiders.

Lawson and Gouveia — who each spoke over the phone on Wednesday — are looking forward to giving their future schools more reasons to like Sherando.

“I’m blessed to able to play what I love for another four years,” said the 6-foot-6, 205-pound Lawson, who Virginia Tech is listing as a linebacker on its website but is more than capable of playing offense. “It’s a new chapter in my life where I get to meet a whole lot of new people. [Virginia Tech recruits have] already started interacting with the people in our class. We’re already building that strong relationship and bond before we even step on campus.”

“It’s everything to me [to play college football].” said the 6-4, 280-pound Gouveia, an all-state tackle who has started since his sophomore year. “I love football with a passion. I’ve been working since I was a kid to be great, and work pays off.”

Lawson received a scholarship offer from Virginia Tech on June 2 and made his verbal commitment just 16 days later.

Lawson — who was primarily recruited by Hokies running backs coach Adam Lechtenberg — was impressed by the effort Virginia Tech put in to get to know him as a person and a player. Lawson’s 2019 season was limited to just four games at the end of his junior year due to a growth plate fracture on his knee, but the Hokies watched Lawson play on video and spent significant time talking to him and Sherando coach Bill Hall.

One of Lawson’s pluses is the type of work ethic he displayed to get on the field at the end of his junior season. The past nine months have been difficult in numerous ways for Virginia high school football players, who did not get to have a fall season due to COVID-19 concerns. But Lawson put them to good use, adding 15 pounds to his frame while not sacrificing the speed that has propelled him to a 4.53 40-yard dash timed by Sherando.

“I’ve been in the weight room a whole lot, just focusing on overall weight and strength,” Lawson said. “To be 205 now is real big for me.”

Hall said the work that Lawson put in under difficult circumstances was great to see.

“He needed to get bigger, faster and stronger,” Hall said. “He was already very gifted athletically speaking, and this gave him that time to focus on gaining the weight that he needed, the strength that he needed. It would have been very easy to feel sorry for yourself and take days off. Not that it hasn’t been a struggle, but he’s continued to push through that to put in the work necessary to give himself this opportunity.”

Hall thinks Lawson has the opportunity to do a lot of big things at Virginia Tech. Lawson is rated by the 39th best prospect for the Virginia class of 2021 by the 247Sports composite rating, which takes into account prospect rankings from all major recruiting services.

“I really think, athletically speaking, he may be one of the best I’ve ever coached,” said Hall, now in his 18th year leading the Warriors. “No one probably here locally ever got a true glimpse of what he could do because he was hurt pretty much the whole [2019] season.

“His transformation from when he was a sophomore to now is just unbelievable. Hopefully, he is going to be such a dominant force in the spring, and he’ll still make another leap when he gets to college. He’s very twitchy, he’s long, he’s so athletic, he’s got top-end speed. He checks every single box that you can imagine. And he puts in the work to realize that potential.”

Despite Lawson’s linebacker listing by Virginia Tech, he said it’s still undetermined what position he’ll play in college for a Hokies team led by fifth-year coach Justin Fuente. Hall said he can envision multiple scenarios based on conversations Sherando has had with Tech’s coaching staff.

“I think there’s still a lot of discussion whether he’ll wind up as a receiver,” Hall said. “He can be a flex tight end. He’s got so much versatility. There’s not many guys who can play multiple positions at a Power 5 school like he can. We’ll have to see where he ends up.”

While 2020 has provided plenty of curveballs, Lawson is glad he didn’t have to deal with another one this week. Fuente has been the subject of criticism this year as Virginia Tech went 5-6 (5-5 Atlantic Coast Conference). But Hokies athletic director Whit Babcock said on Tuesday that Fuente will keep his job for a sixth season. Fuente is 43-32 overall.

“It’s just nice to have the drama brushed away, to go into college with the coaches I’ve been talking with and not walk in blind to a whole new system,” Lawson said.

Lawson said he’s interested in engineering, but he may go into Virginia Tech undeclared in terms of major.

Gouveia — who had scholarship offers from 10 schools — said he first got in contact with Richmond in March. Gouveia made his verbal commitment on Aug. 21 to the Football Championship Subdivision Colonial Athletic Association school, which is not playing this fall due to COVID-19.

“The coaches are really great guys, and they have really great facilities,” Gouveia said. “Also, being able to play with Jabril Hayes [is a plus]. He said really good things about the school.”

“I can’t wait to work with him in that O-line room,” Gouveia said. “Richmond is on the come up. We’re going to be great. I’m excited.”

Like Lawson, Gouveia can play multiple positions. Over the years, Gouveia has trained at center and guard and learned everything he could about those spots.

“Keith is so versatile,” Hall said. “He’s always played tackle for us because he’s our best lineman. He has the length and size and all those things that you need to protect the blind side [of the quarterback] in high school. He’s not quite as tall as some of the tackles at the college level, but he’s grown a little bit here recently. He can play any of those positions. He’s such a skilled athlete.”

“From the first day when he walked in, it’s just been phenomenal,” Hall said. “He’s got such a great disposition. He’s kind of a throwback, hard-nosed, gritty football player, and you couple that with his size and strength and knowledge of the game, that’s a dangerous combination.”

Hall has had a lot of dealings with Virginia Tech and Richmond in recent years, and he feels good about the situations that are waiting for Lawson and Gouveia.

Hall said Rivers always speaks highly of the Virginia Tech program. And now Fuente is in a situation where the players on the roster are all people he has recruited, and he’ll hopefully get to have a normal season in 2021 and not deal with a constantly evolving situation that football teams were forced to deal with in 2020 because of COVID-19. And with Richmond, Hall likes everything the school is doing with their players on and off the field.

“From a football perspective, I think it’s important that you always have great relationships with all the coaches along the East Coast,” Hall said. “I think you develop a certain level of trust with each other in terms of how they’re going to take care of our kids, and they have a trust with me in terms of the recommendations that I give them. I feel like each of them found a good fit.”

Hall’s proud of both of Lawson and Gouveia.

“When you sign a National Letter of Intent and you don’t have to pay anything to go to school, and the type of degree, and the network they’re going to have when they leave those places, will set them up for success,” Hall said. “More importantly, I know these guys both will capitalize on the opportunities ahead of them, because that’s the type of kids they are. They both come from great families and are really supported by their families. That’s a reflection on their families and the type of work ethic they have, the type of people they are, the type of character they possess.”

Lawson and Gouveia said they’re both happy for each other.

“Me and Keli have been friends since middle school, and it’s great to see him excel,” Gouveia said.

“That’s one of those guys you really grow up with,” said Lawson of Gouveia. “You get to see him grow with you and develop, and you see him build character mentally and physically. It’s amazing to sign with him today.”