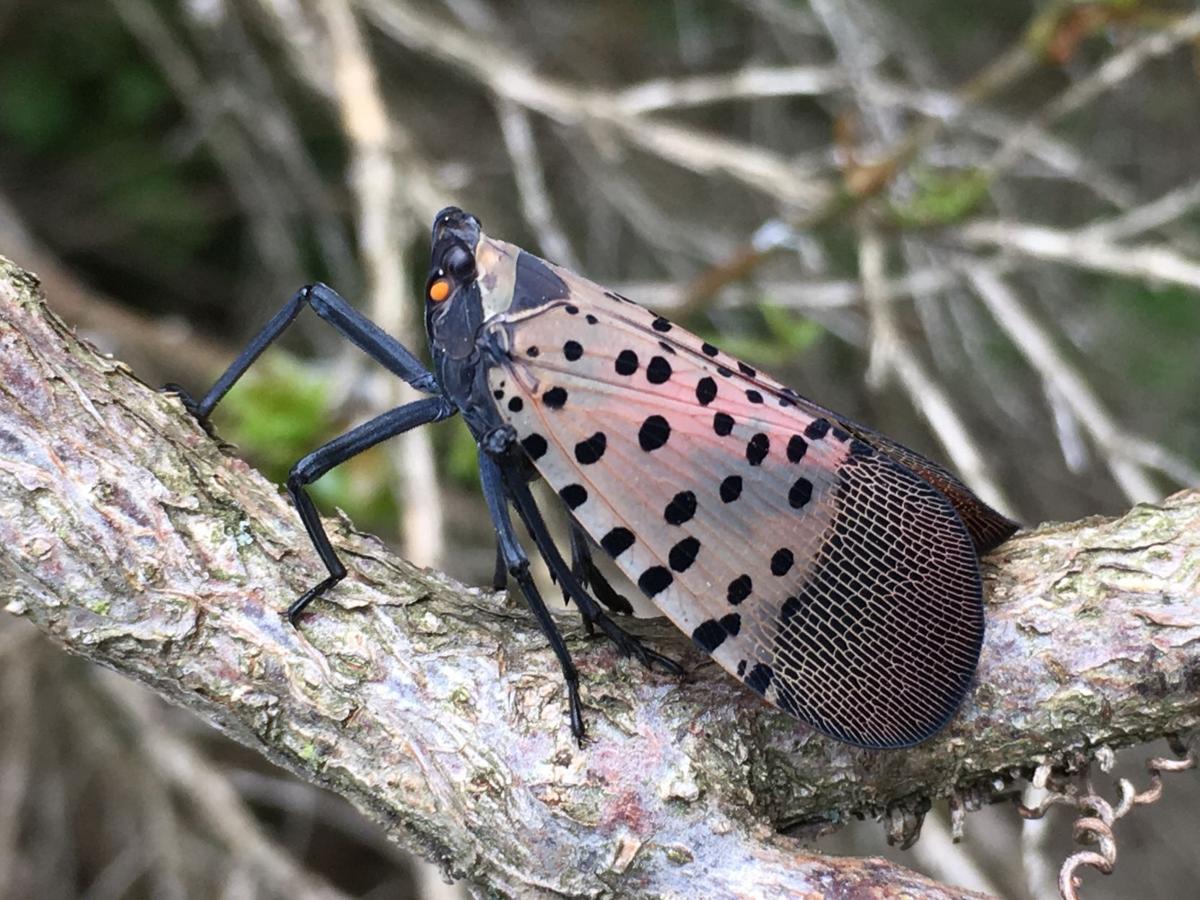 This is what an adult spotted lanternfly looks like. 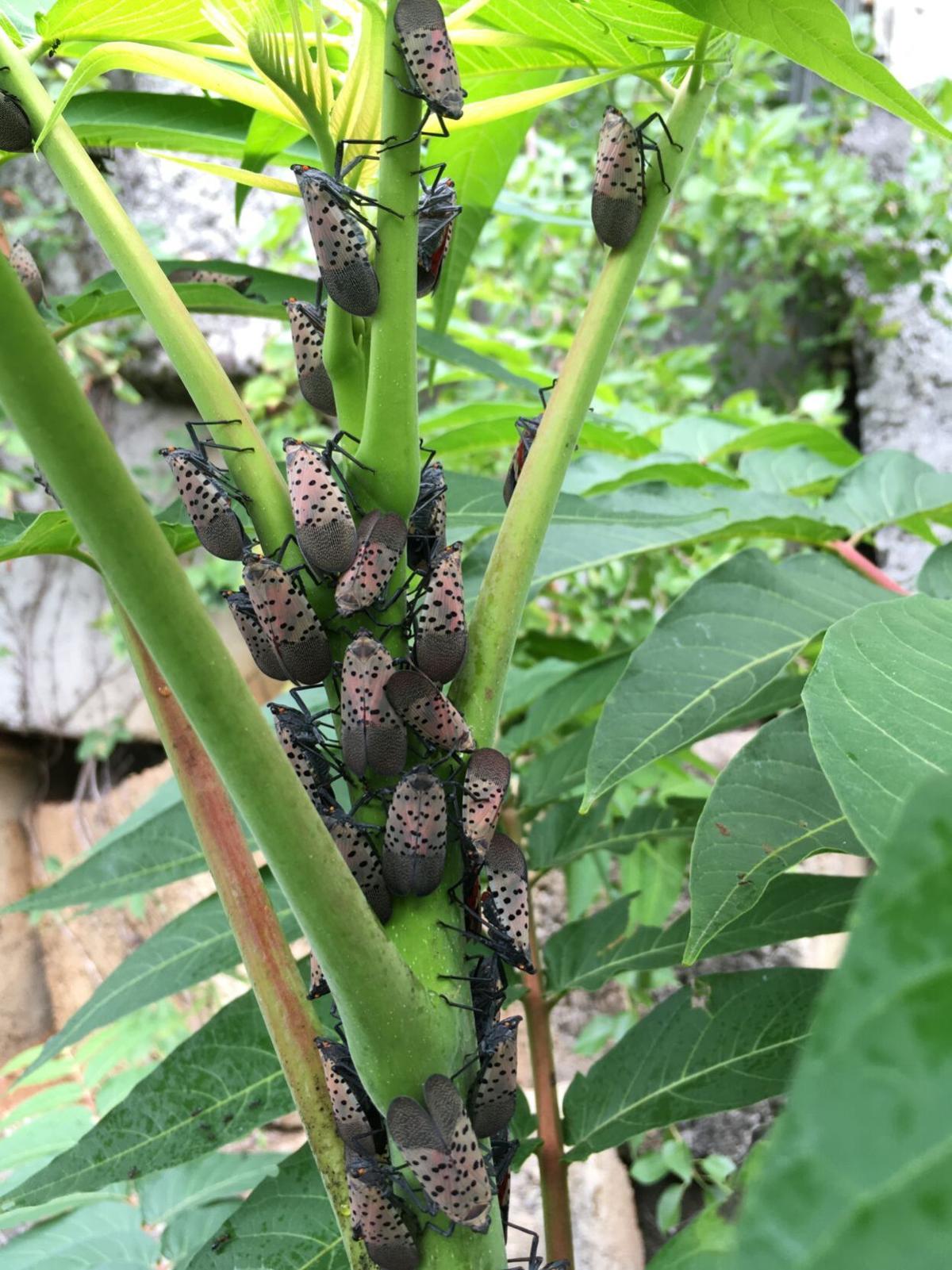 This is what an adult spotted lanternfly looks like.

WINCHESTER — Just because something is pretty doesn’t mean you want it around.

Such is the case with the spotted lanternfly. With its yellow and black body, and its red, white and black wings and dark spots, it’s eye-catching.

But this invasive species is destructive to trees, crops and other plantings.

“All of Winchester is considered infested,” Sutphin said last week.

Spotted lanternflies also have been observed in northern parts of Frederick County between U.S. 11, Interstate 81 and the West Virginia line, as well as eastern parts of the county toward Opequon Creek.

A few were discovered in western Clarke County north of Harry Byrd Highway (Va.7) last year. Sutphin said he doesn’t know of any found in Clarke so far this year.

Extension officials are monitoring the spread of spotted lanternflies in hopes of finding a way to get rid of them.

Spotted lanternflies often congregate on hardwood trees such as black walnuts and maples.

“They’re a piercing, sucking insect, drinking the sap of the tree in large volumes,” said Sutphin.

Afterward, he said, they excrete a sticky waste substance called “honeydew.” As it builds up on a surface, the substance turns into “sooty mold,” a black fungal growth covering anything it comes into contact with, including vine leaves.

Spotted lanternflies can destroy or damage crops such as grapes, peaches, apples, cherries and hops.

Infestations in Pennsylvania have resulted in death and destruction among tree of heaven, an invasive tree species originally from Asia. Locally, declines in tree of heaven and black walnut trees have been attributed to the insect, Sutphin said.

Large numbers of spotted lanternflies also can be a nuisance to homeowners, with their honeydew covering ornamental plants and even patios and vehicles.

Scientists believe the pest from Asia made its way to Pennsylvania in 2014 on a delivery of ornamental landscaping stone. Infestations spread in the United States as the stone was distributed elsewhere.

Spotted lanternflies (scientific name Lycorma delicatula) apparently found their way to Winchester in 2018. They have since spread within a 60-square-mile radius of the city.

Their eggs typically hatch in April or May, so they are becoming more noticeable as nymphs start growing into adults.

“They can occur in aggregations in the thousands,” Sutphin said. “You can have several thousand in a single location.”

What’s the best way to get ride of them?

“It’s going to require multiple steps at all life stages” to eradicate spotted lanternflies in large numbers, he said.

If you see them, kill them, if possible experts advise.

Small numbers of spotted lanternflies can be squished.

Sutphin also suggests removing trees of heaven from properties and treating hardwood trees with insecticides such as carbaryl, bifenthrin or pyrethrin. Or use a systemic insecticide such as imidacloprid, which can be injected into a tree or applied to the soil around it.

Egg masses within trees can be destroyed during the winter, and sticky paper can be wrapped around trees to trap young lanternflies. But sticky paper can catch harmless insects as well as birds and small animals, Sutphin cautioned.

Sutphin asks that anyone in Frederick County or nearby areas who finds spotted lanternflies to call the Cooperative Extension office at 540-665-5699.

Winchester residents need not call, though, because Extension officials have determined that lanternflies are pretty much everywhere in the city.

As for the long-term effects of spotted lanternflies, “We honestly don’t know,” Sutphin said.

Thanks for this great article. I wonder if you could do a follow up and publicize the work of a student science fair winner who had a cheap DIY solution for lantern flies. She is the daughter of a farmer. Her name is Rachel Bergy, you can google her.. She lives in PA and wrapped 80 trees on her family property with her DIY solution. The premise is this: "That idea is the tinfoil barrier around the tree with a tunnel that leads the lanternfly into netting, where Rachel said they tend to die within 24 hours. She said her research shows this trap catches 103 percent more lanternflies than the sticky tape and 94 percent fewer other insects." anyhow...with all the orchards around here and the general negativity of 2020, it is nice to feel there is something that one can do....thanks!!

Another "gift" courtesy of the t*rd world country, china.[sneaky]

@Con - I think we all know it's Trump's fault via Russian collusion, dontchaknow! [lol]