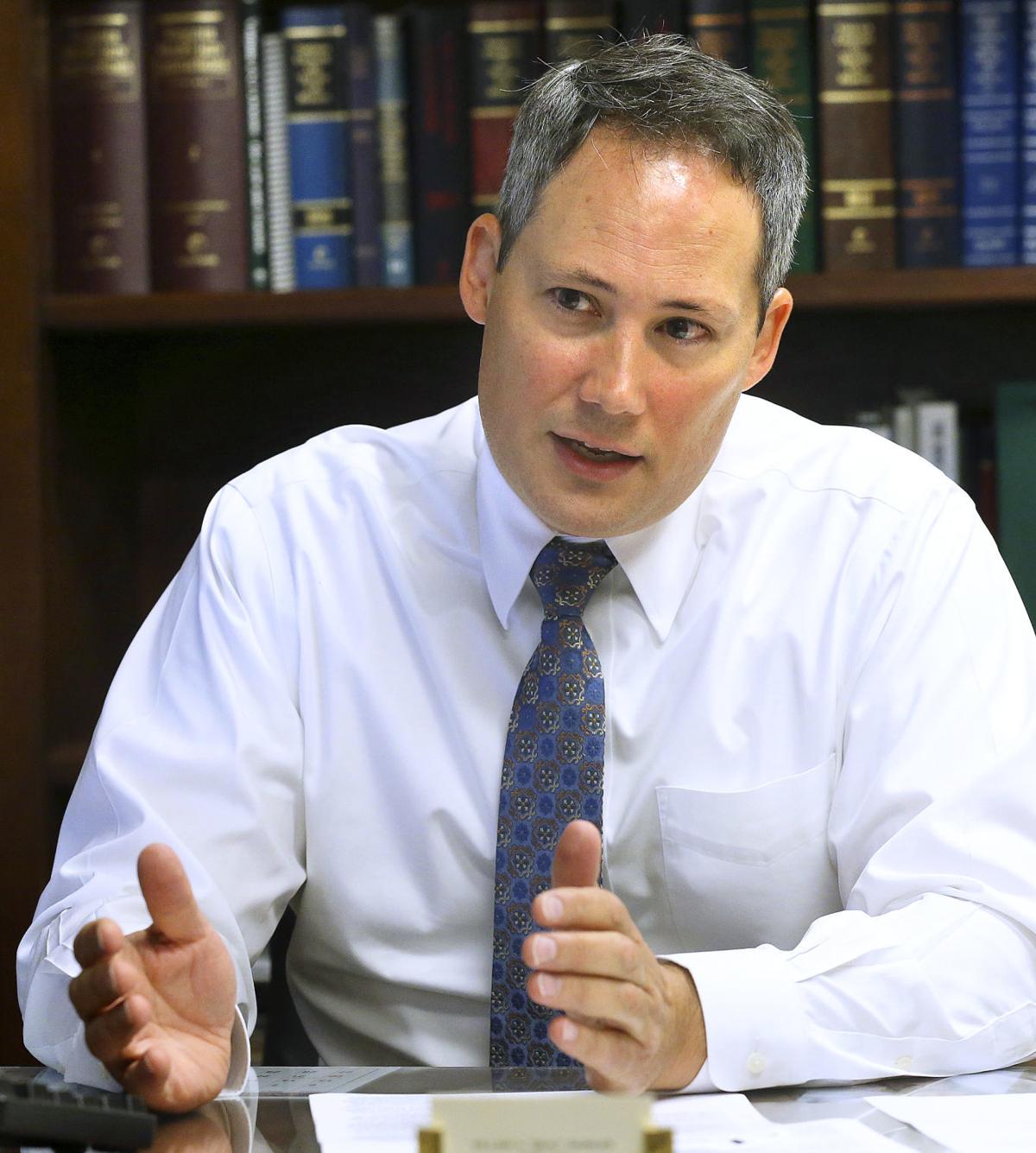 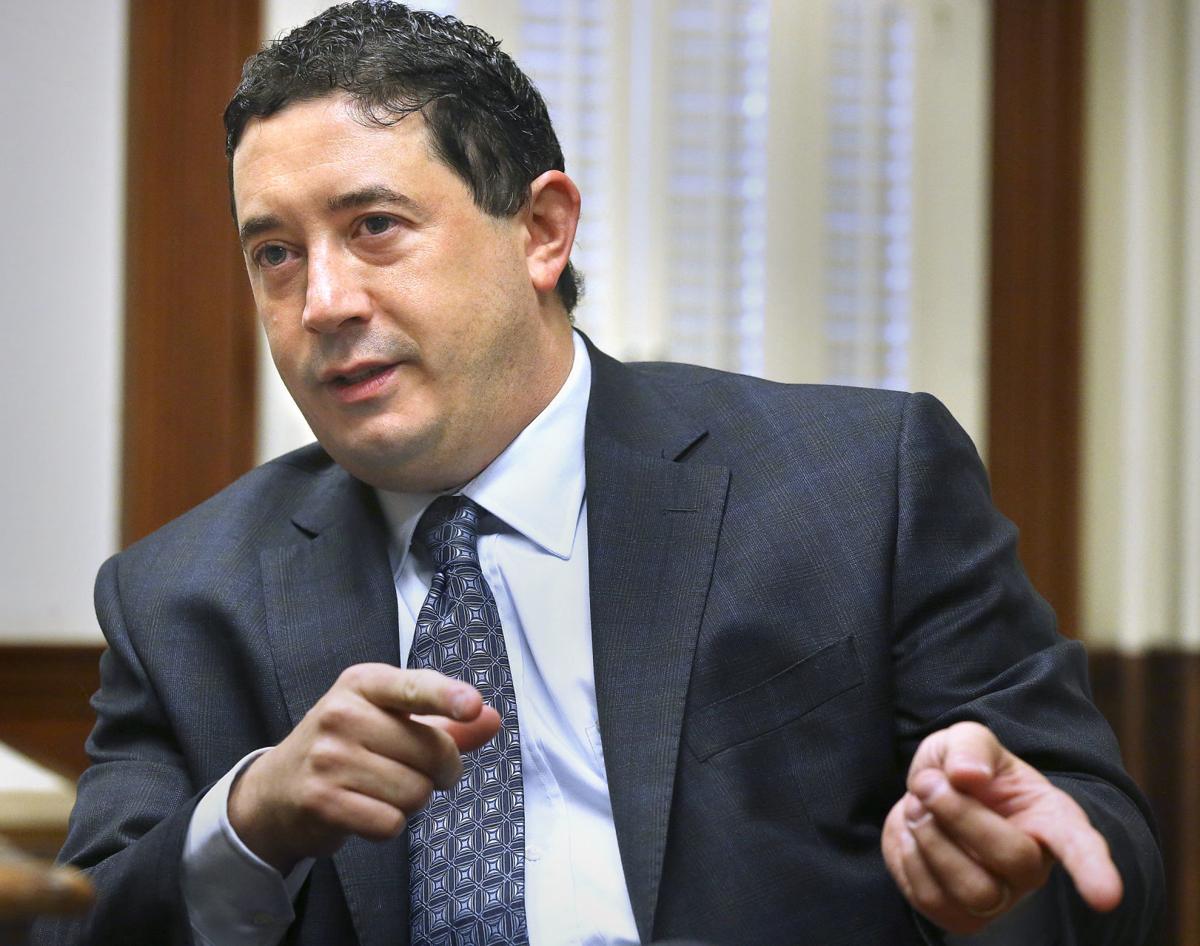 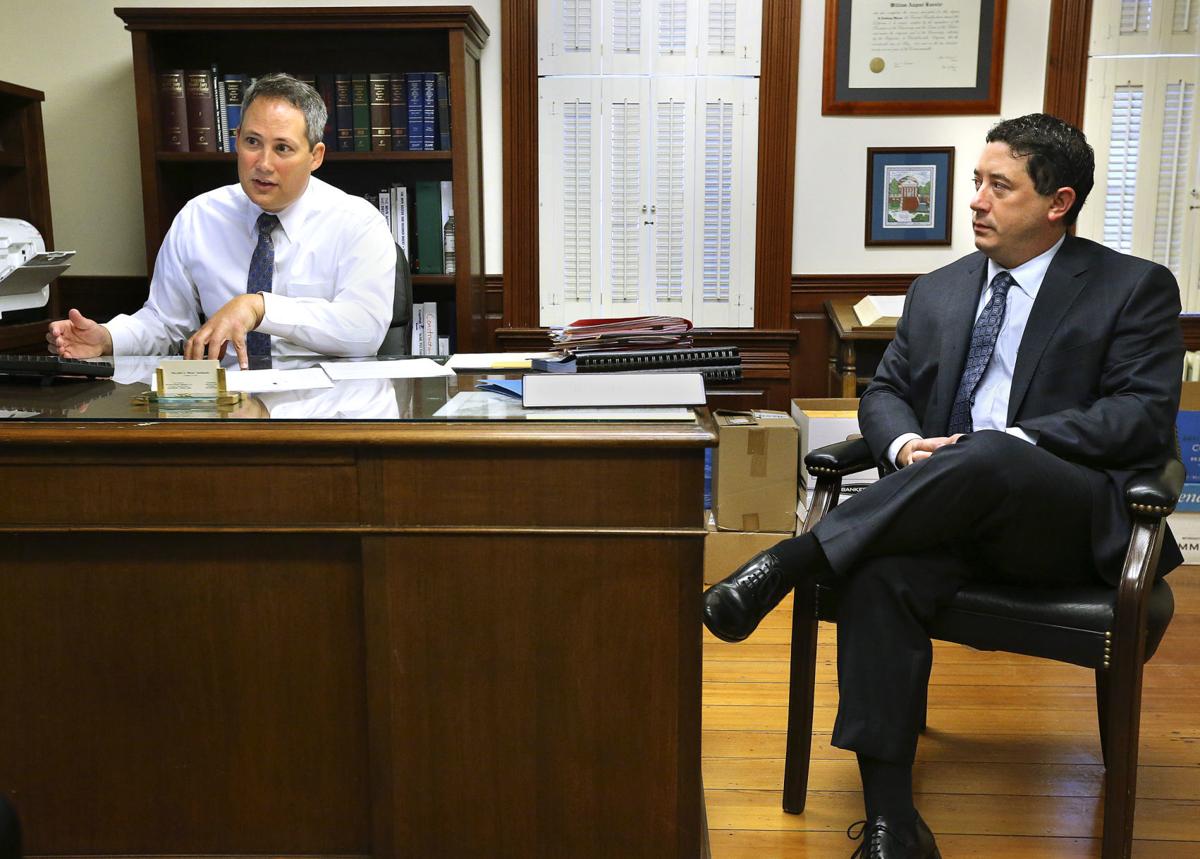 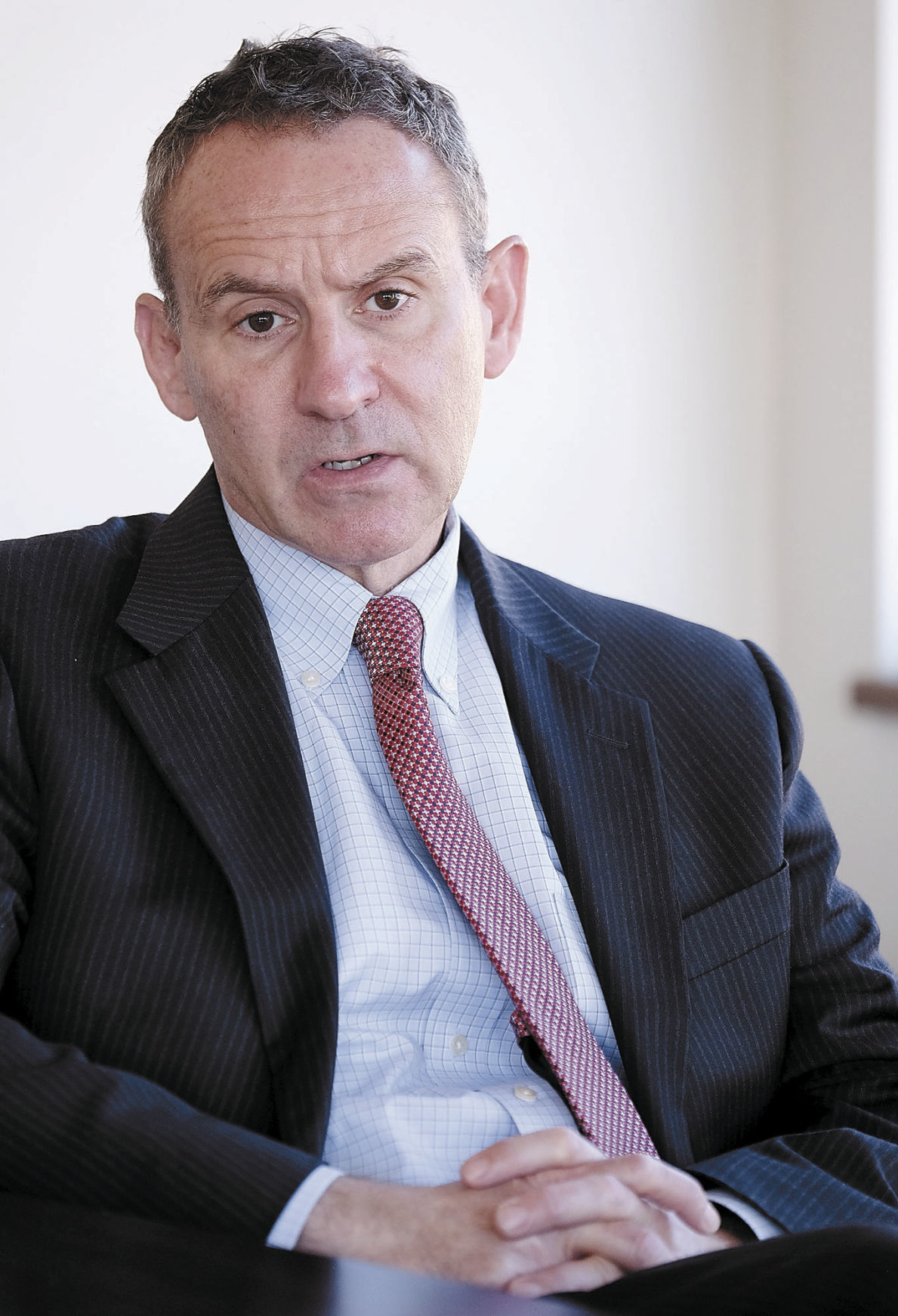 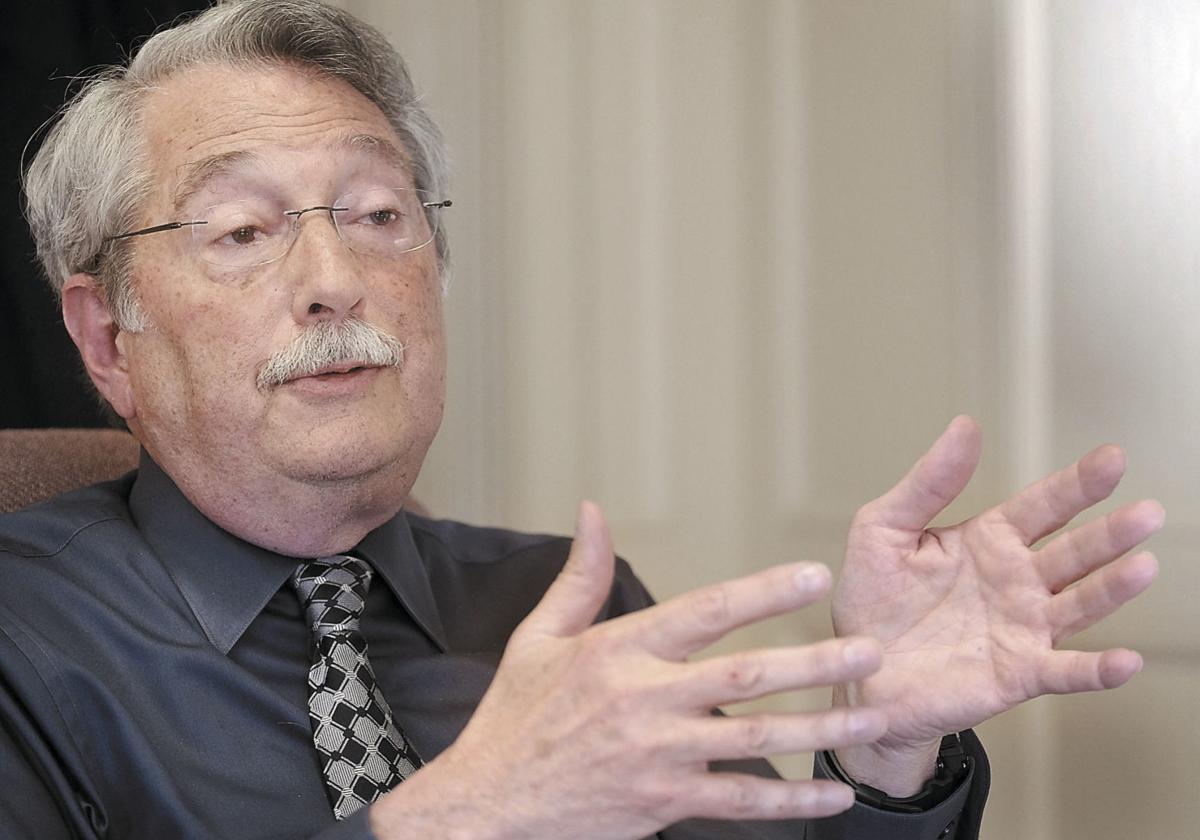 That’s the jail time Evan John Bender received when he was sentenced in Frederick County Circuit Court on Nov. 26. It’s also the amount of jail time Alessandrew Rashaun Williams got on Aug. 16.

Bender, 27, pleaded no contest to abduction, assault, and strangulation charges in an incident last year in which he beat his then-girlfriend in their home, held her against her will, roughed up her children and stalked them when they fled. Williams, 23, pleaded no contest to marijuana distribution and possession of hashish oil charges involving less than two pounds of pot in 2017.

It’s based on state sentencing guideline recommendations, which are used in about 90% of felony cases. In the remainder of cases, guidelines aren’t used because there isn’t a statistical basis to calculate them because they involve rare crimes such as the killing of a police officer.

For a generation since Virginia abolished parole in 1995 as part of a national “truth in sentencing” movement, it has relied on guidelines for punishment recommendations. As a result, convicts who maintain good behavior serve about 85% of their sentences.

One of the goals of the guidelines was to more accurately reflect the actual time a defendant faces. Under the parole system, sentences were longer, but convicts with good behavior were often eligible for parole early in their sentences.

Guidelines are voluntary, but judges usually follow them. Guidelines are credited with creating uniformity in sentencing statewide, but they can create disparities in punishment.

The guidelines recommend a sentencing range with a minimum, midpoint and maximum. They use a point system calculated by probation officers.

A defendant’s criminal history, including their juvenile record, factor heavily into scoring. Prior convictions, whether they occurred months ago or decades ago, count the same against a defendant. Under the guidelines, a first-offender or someone with a minimal criminal history involved in a violent crime is more likely to get probation than a defendant with an extensive criminal history convicted of a nonviolent crime. The disparity can even involve cases involving death.

For example, when driver Kelsey Marie Caldwell accidentally struck and killed an elderly woman in a crosswalk in 2016, she received a two-year suspended sentence in Winchester Circuit Court in 2017 for reckless driving. However, when Ernesto Anthony Newman pleaded guilty in August in Frederick County Circuit Court for shoplifting, he received a one-year sentence with one month suspended.

Caldwell had a relatively clean record, but the 48-year-old Newman’s criminal history includes convictions for domestic assault and battery, drug possession, embezzlement, theft and trespassing, which factored into his guidelines. Nonetheless, for stealing $80 worth of clothing — Newman told police when he was arrested that it was because he was cold — he spent nearly a year in jail, while a woman who accidentally took a life avoided imprisonment.

Marc Abrams, Winchester commonwealth’s attorney, said Caldwell received a suspended sentence because it would’ve been difficult to convict her on an involuntary manslaughter charge at trial. Abrams would have needed to prove Caldwell showed a “callous disregard for life.”

Abrams said Caldwell still suffered consequences as a result of being put on probation. In July, she was sentenced to up to four months in jail for violating probation after leaving the scene of an accident.

Abrams, an attorney since 1988 and commonwealth’s attorney since 2015, noted most nonviolent criminals who received jail time for drug or property crimes are habitual offenders.

“What do you do with somebody that won’t stop stealing?” he said. “We can’t ignore it and keep putting them on probation again.”

Based on his record, Newman could be considered a career criminal, but his sentence was also nearly three times as much as what Joshua Allen Putman received on Nov. 21 in Frederick Circuit Court. He pleaded no-contest to unlawful wounding for taking part in an attack in which another man struck the victim in the face with a beer bottle. Putman received a three-year sentence, with all but four months suspended.

McKenzie Marie Stickley is another example of a violent offender getting a lighter sentence than a nonviolent one. Stickley led police on a high-speed chase in February in which she nearly struck a police cruiser and ended up getting Tased by a deputy. In June, she received a seven-year sentence, with all but five months and a week of time served suspended. A year earlier, Samantha Lynn Gregory, an addict with a long history of convictions for nonviolent crimes like breaking and entering, forgery and grand larceny, received six years imprisonment after being terminated from the Northwest Regional Adult Drug Treatment Court for multiple violations.

From the outside looking in, the disparities may appear unfair. But Ross Spicer, an attorney since 1991 and Frederick County commonwealth’s attorney since 2013, said that’s an illusion.

Spicer said the guidelines are logical and sensible. If people don’t understand the disparities, it’s because they’re not privy to the details of cases.

“On the surface, it seems like there’s something out of whack, but the discrepancies can be explained if you’re willing to take the time to look at the details,” Spicer said. “They aren’t just these wild numbers that come out of the air that impose these astronomical sentences for relatively low-level crimes. They do make sense.”

Spicer said drug court defendants like Gregory are afforded an “immense opportunity” by being accepted into the alternative-to-incarceration program, which includes services like drug treatment and individual and group therapy. But to keep the court from just being a get-out-of-jail card, it has a carrot-and-stick approach. That means those who fail face long sentences like Gregory.

Regarding Putnam, Spicer said he cooperated with authorities and was willing to testify against Dustin Marshall McKenzie, who struck the victim with the beer bottle. Spicer said Putnam was also less culpable than McKenzie, who had an extensive and violent criminal record and received five years with two suspended.

In Bender’s case, Marie E. Acosta, a county assistant commonwealth’s attorney, said after his sentencing that convicting Bender at trial might have been difficult because the only physical evidence was red marks on the victim’s neck. The risk of acquittal and the victim’s reluctance to put her children through the ordeal of testifying at a trial led to a plea bargain. Trials occur in just 10% of felony cases in Virginia, according to the Virginia Criminal Sentencing Commission.

Williams and his family nervously awaited his fate on the day of his sentencing and hoped for a sentence below guidelines. Williams guidelines called for a minimum of seven months, a midpoint of one year and a maximum of 16 months.

Williams’ attorney David L. Hensley argued that guidelines are mathematical calculations that don’t account for a defendant’s character or humanity. Certainly, the fact that Williams was no drug kingpin wasn’t disputed.

In September of 2017, he dealt a half-ounce of marijuana to a Northern Virginia Drug and Gang Task Force confidential informant. About a month later, nine ounces of marijuana, a pound of marijuana edibles, hashish oil and $2,000 in cash were seized from a home Williams was staying in.

In asking Judge Alexander R. Iden to sentence below the guidelines, Hensley noted that like marijuana, there was once a prohibition on alcohol. Hensley said there are now parties where people dress like Prohibition-era bootleggers. With states increasingly legalizing marijuana, he wondered how society might look at marijuana dealers 100 years from now.

“The defendant does not have to like our laws but he has to obey them,” she said. “And when he does not, there is a price to pay.”

Williams told Iden he made bad choices but was willing to take responsibility for his actions. Iden said he believed Williams and acknowledged Virginia imprisons people for an activity that is legal in other states.

“We live in the times that we live in,” Iden said. “I don’t find what takes this below the guidelines.”

Iden’s verdict was typical. Judges, who must give a written explanation when they sentence outside of guidelines, rarely do. The legislature scrutinizes how often judge sentences outside guidelines when they come up for reappointment every eight years and a judge who often deviates from the guidelines could risk being not reappointed.

However, Meredith Farrar-Owens, sentencing commission director, said in an email that the commission is unaware of any judges not being reappointed based solely on guidelines compliance. She said only a small number of judges aren’t reappointed and the rejected ones often had higher rates of concurring with guidelines than those who were reappointed.

Farrar-Owens added that judicial discretion continues to be an important element of sentencing. She said guidelines could never fully account for the unique circumstances of each case.

“Because the guidelines are advisory, judges are free to consider any potential mitigating or aggravating circumstances for each individual defendant before the court,” Farrar-Owens said. “Such factors include the impact of the crime on the victim.”

Tim Coyne, area public defender since 2004 and a member of the 17-person commission since 2017, said judges take sentencing seriously and he’s had sentencing hearings last all day. Besides guidelines, a defendant’s alcohol, drug and psychiatric history as well as character witnesses, letters of support and victim impact statements are considered.

“A judge can always go above or below the guidelines and that’s where it’s up to us as attorneys to argue for our clients,” said Coyne, an attorney since 1991. “I get it all the time from clients. They say, ‘I’m in a jail cell with somebody and he got this for that. Why is my sentence or offer so much different?’ There are so many individualized factors that play into a sentencing determination.”

Coyne said the commission studies whether the guidelines accurately reflect sentencing. For example, guidelines were adjusted when data showed judges were often deviating above guidelines for breaking and entering cases.

Nonetheless, with judges usually adhering to guidelines, the commission is unlikely to adjust them, said William August “Beau” Bassler, an attorney since 1998.

“The more people that are sentenced according to the guidelines, the more statistics back up that that’s the appropriate sentence,” he said. “It becomes a self-fulfilling prophecy.”

Winchester is corrupt.anything for a conviction.$$$$$$

And yet a careless and reckless driver takes away someones family member and gets probation??!!!!

Wichester is such a corrupt place.they will do anything to gain a conviction..conviction= more money in their pockets.yet vs.a woman who drove reckless and carless because her cell phone was more important took a family members of someones life but thats acceptable??!!

These criminals get a slap on the wrist; that's why they keep committing crimes. I say throw the book at them.

Well, that's just the thing. The law is like a box of chocolates, as Gump might say, you never know what you are going to get. Sometimes justice, sometimes not. Some who ought to really have to pay a price for their crimes get off lightly while others pay a much heavier price.

And im sure youre a saint

And you're a saint