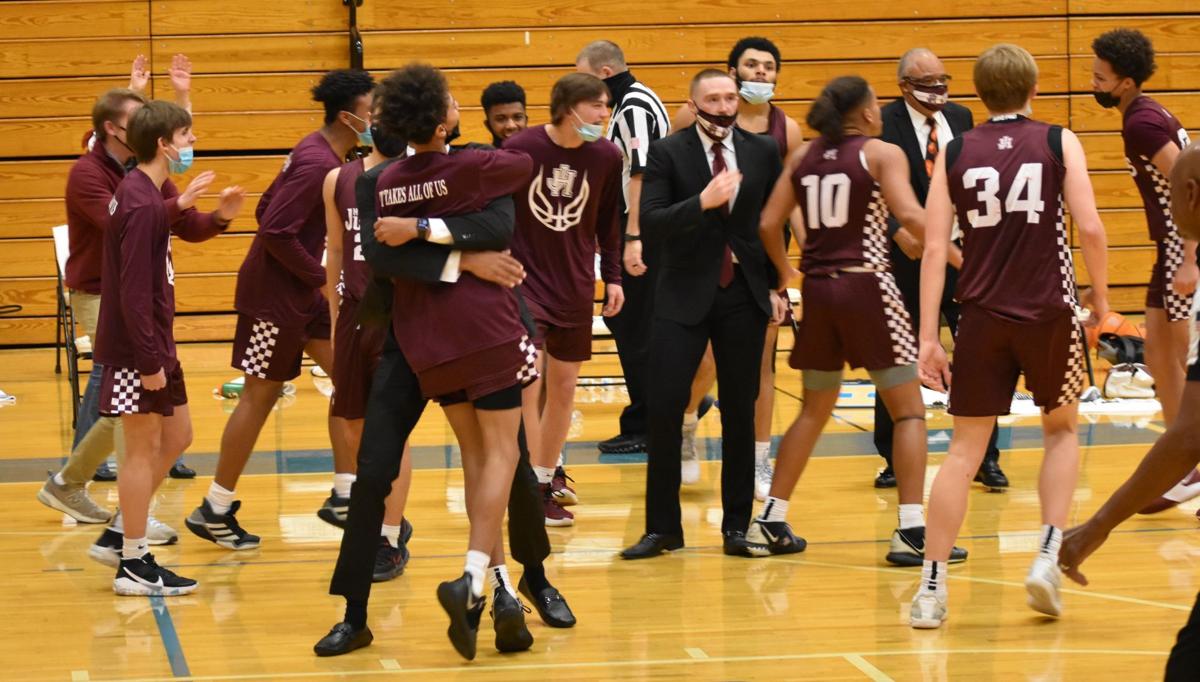 Members of the Handley boys’ basketball team celebrate following their 52-49 win over Halifax County in the Class 4 semifinals on Wednesday. The Judges will host Smithfield in the title game at 5 p.m. on Saturday at Maddex-Omps Gymnasium. 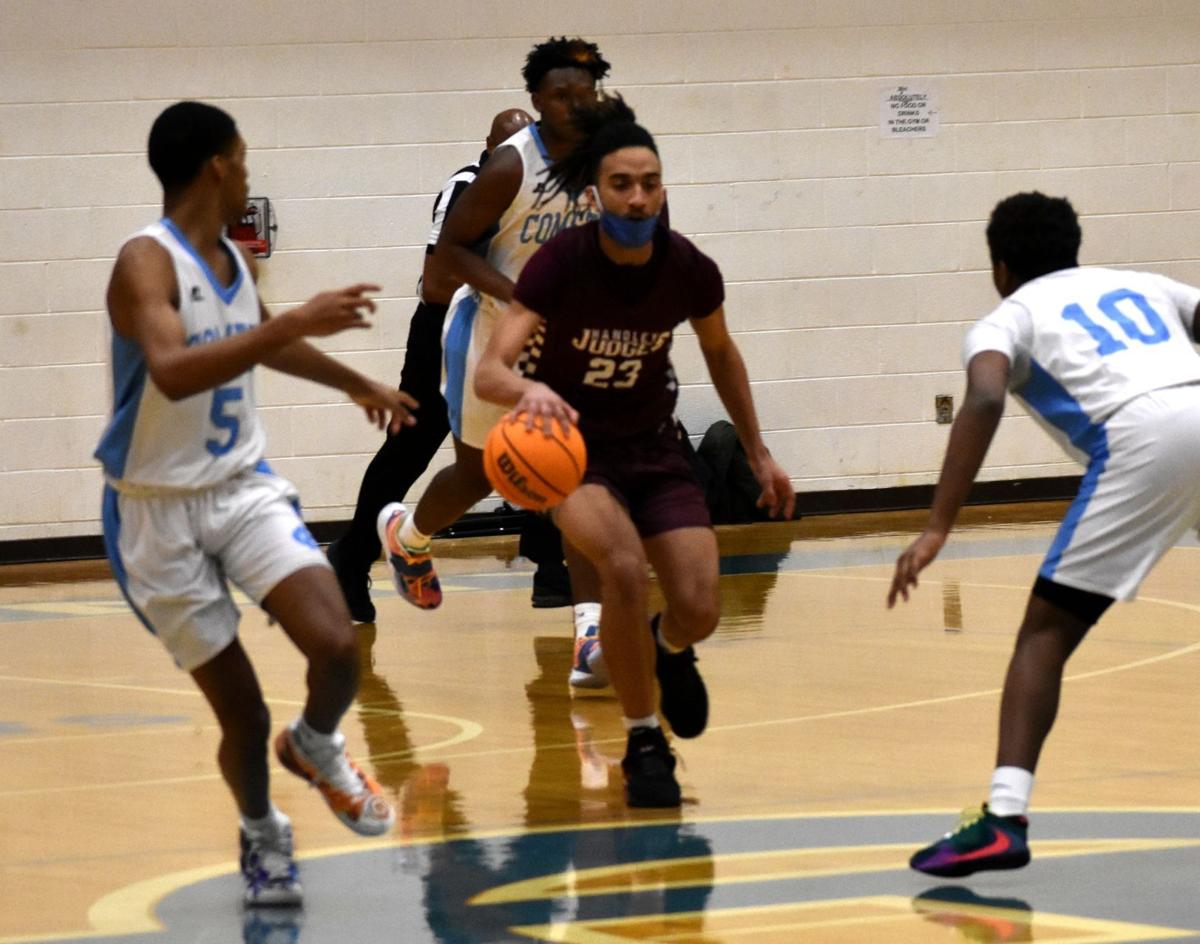 Members of the Handley boys’ basketball team celebrate following their 52-49 win over Halifax County in the Class 4 semifinals on Wednesday. The Judges will host Smithfield in the title game at 5 p.m. on Saturday at Maddex-Omps Gymnasium.

SOUTH BOSTON — Halifax County’s Keshawn Wells took the inbounds pass from the right sideline with 2.3 seconds left in regulation, and from about five feet in front of midcourt he threw up a sky-high shot that found its way into the bottom of the net after the buzzer sounded.

The Comets and their parents who made up part of the sparse crowd at Halifax County High School exploded after the 3-pointer, which sent their Class 4 state semifinal game with Handley into overtime tied at 47. Just 12 seconds earlier, the Comets were facing a five-point deficit.

It was a stunning turn of events for the Judges, but it wasn’t a deflating one.

“Man, it was like a movie,” said Handley senior forward Demitri Gardner in the visiting team locker room on Wednesday night. “I’m not going to say it was luck, but I was like, ‘Wow, that really went in. So it’s time for us to really, really dial it in.’”

In overtime, Handley produced yet another ending that gave the fans watching on their computer screens at home — as well as their parents in the crowd — something to smile about.

The Judges increased the drama a bit by falling behind 31 seconds into overtime on a six-shot possession for Halifax. But thanks to their continued defensive excellence and a clutch 3-pointer from their star performer Gardner with 40 seconds left that put the Judges ahead for good, Handley disintegrated the Comets and won 52-49 to advance to Saturday’s Class 4 state championship game.

The 11-0 Judges — who received a game-high 26 points along with eight rebounds from Gardner and held Halifax (3-3) to 19-of-60 shooting (4-of-18 on 3-pointers) by breaking from the norm and playing mostly zone defense — couldn’t have scripted a better way to end their season.

The last 12 seconds of the fourth quarter wasn’t the only rough stretch for Handley on Wednesday — for example, the Judges committed four straight turnovers against a half-court trap introduced by Halifax coach Sterling Williams in the fourth quarter, which helped the Comets go on a 6-0 run to tie the game at 40 with 5:23 left. Handley also committed 10 turnovers in the first half.

But Handley — which was also pushed to the limit by Loudoun County in a 55-53 win in the Region 4C championship game — is showing that there’s no situation that’s too daunting for it.

“I’m just so proud of their ability to just handle adversity and have a tough mentality,” Handley first-year head coach Zach Harrell said. “In the sense that when the game is not being officiated like you normally think it is, or when we turn it over a couple times, when things aren’t going our way, what we’ve done as a team is unify. We have a next-play mentality.

“That kid hitting that shot from half court to send it to overtime was a blessing in disguise. Because it gave us another challenge. It gave us another opportunity to come together and rise to the occasion. I’m just so proud of them for doing that.”

Harrell said he knew the game was going down to the wire, and it did indeed look that way throughout the game. Though each team had some notable runs — for example, the Comets had an 8-0 run over a stretch of one minute and 51 seconds to take a 17-11 lead with 6:54 left in the second quarter, only to see Handley answer with a 12-0 run en route to taking a 23-19 halftime lead — neither squad led by more than six points. There were eight lead changes and six ties.

While Gardner wouldn’t call Wells’ 3-pointer luck, it was unusual. Halifax couldn’t get much of anything going from the outside and struggled to penetrate against Handley’s zone, which became the Judges’ primary defense with just under three minutes left in the first quarter. Normally, Handley likes to mainly rely on its man-to-man defense.

“We wanted to start the game in man, get a sweat, get some flow,” Harrell said. “In big games like this, the nerves are just there for the first couple of minutes. As soon as it turned into a basketball game, it was, ‘Let’s go to the game plan.’

“We went to the zone. We wanted to try and limit [Kameron Roberts, who finished with nine points] and try and limit their penetration.”

Harrell said the Judges played zone about 80 percent of the time over the final 31 minutes on Wednesday.

“We felt like they were better at driving than we were at shooting the ball,” said Gardner of the zone defense that also helped produce 13 turnovers.

Williams said Halifax had faced zone defenses in each of its games this season, but hadn’t had much success.

When Ferrell (14 points) finally put the ball in with 3:29 left in overtime after five previous misses on the possession, Halifax had its first lead since the 6:53 mark of the third quarter at 24-23.

But the Judges shut the Comets out from there. Halifax — whose offensive production was hurt when Jaden Waller (14 points) fouled out with 2:56 left in overtime — missed their remaining four shots of the overtime session.

The last one was a 3-point attempt by Ferrell after Gardner made 1 of 2 free throws with 9.6 seconds left to make it 52-49. Ferrell dribbled the ball toward Gardner before pulling up for a straightaway 3-pointer from about 25 feet away. Gardner moved forward and put a hand up to contest it, and Ferrell’s shot was well off the mark.

“I’m very proud of how in the Loudoun County game and in this game, just how our guys have handled locking up in those final possessions there,” Harrell said. “And credit to Stephen Daley. As soon as they got an offensive rebound [late in the game], I looked at all of our coaches, and we all said ‘Stephen’ at the same time. We got him in there for certain situations, and he had three rebounds at the end of the game. Just unbelievable heart.”

It looked for a moment that Daley might have a chance to go to the line with an offensive rebound of Gardner’s missed free throw with 9.4 seconds left, but instead a jump ball was called, giving Halifax one more chance. Still, Daley did indeed play a key role, grabbing five rebounds in regulation and putting two of them back for buckets.

“I’ve gotten really used to that role this season, coming off the bench, using my size and athleticism to get a rebound, being physical in the paint with the other team,” Daley said.

And Gardner is used to delivering when Handley needs him.

The senior didn’t have his best shooting performance on Wednesday (9 of 23; Harrell felt Gardner, who had six free-throw attempts, didn’t get many calls around the basket). But Gardner knocked down four of the Judges’ six 3-pointers (Handley had 16 attempts), including the game-winner with 40 seconds left. Gardner knocked down a straightaway 3-pointer from three feet beyond the arc to put Handley up 51-49 with 40 seconds left.

“I shoot a lot of game-winners, so I had the confidence,” said Gardner, who has scored at least 20 points in every game this season. “I was going to shoot it, and it looked good. Real good. I was happy, and very excited.”

“Big-time players make big-time plays,” said Harrell of the 6-foot-5 forward who has offers to play in junior college from Richard Bland and Potomac State. “I think what Demitri figured out is I’m not going to get a lot of these calls at the rim tonight.

“One thing that makes that kid so special and why he’s getting some athletic scholarship offers is his ability to knock down that shot off the dribble, off the catch, off two feet, stop on a dime. He’s just a big-time player with a relentless mentality that puts the last miss, or last turnover, or last play behind him. He’s always ready to step up and knock down a cold-blooded shot.”

Now, Handley — which also got six points and eight rebounds from Chaz Lattimore on Wednesday — will take a shot at the ultimate prize.

The Judges have played in three previous state titles games in their history, including two since 2014. Because the COVID-19 pandemic has resulted in the Virginia High School League using high school gyms for state championship games, Handley will get the unique experience of playing at home as it tries to make history.

“I was yelling the whole game to my squad, ‘I want this bad. How bad do you want it?’ Gardner said. “We wanted it, and we won it. I just really want to be one of the first ones [to win a state championship] in Handley history.”