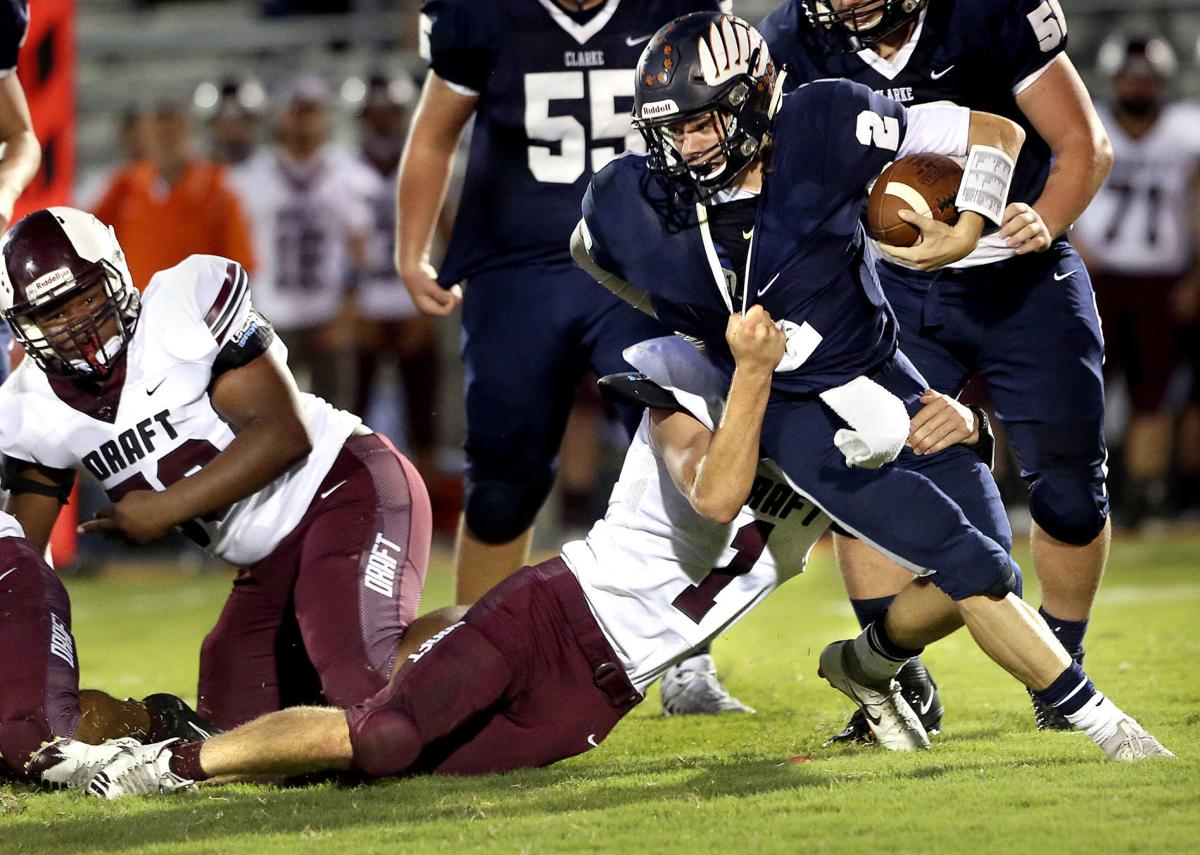 Clarke County quarterback Colby Childs is brought down by Stuarts Draft defensive back Dustyn Fitzgerald in the second quarter of their game Friday at Clarke County High School. The Cougars sacked Childs five times and held Clarke County to 157 yards in a 21-7 win. 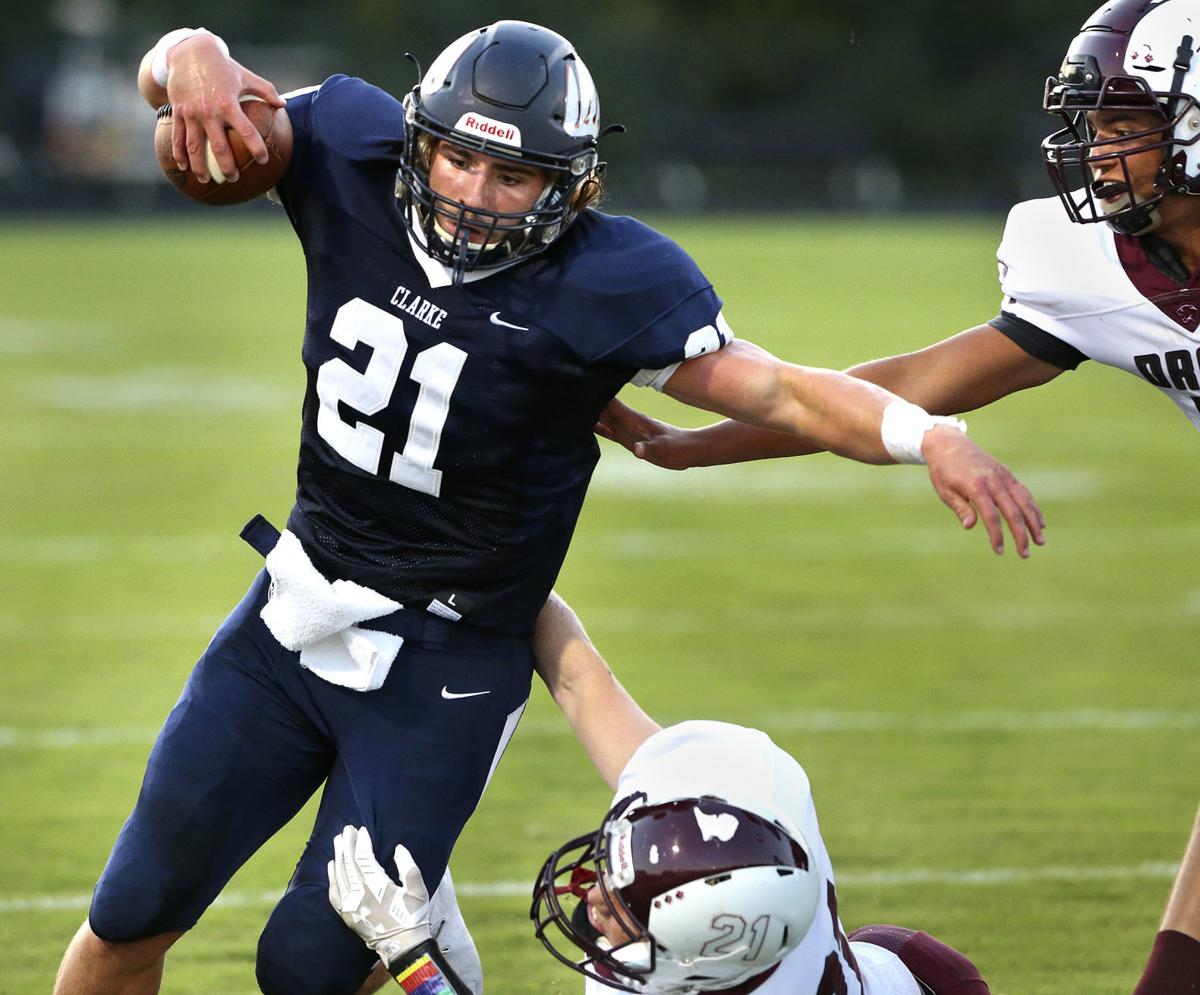 Clarke County's Peyton Rutherford is forced out of bounds by Symeon Balser (bottom) and Freddie Watkins of Stuarts Draft in the first quarter of their game Friday at Clarke County High School. Rutherford had 53 yards receiving on four catches but was held to 48 yards on 16 rushing attempts after picking up 427 yards on the ground in his first two games.

Clarke County quarterback Colby Childs is brought down by Stuarts Draft defensive back Dustyn Fitzgerald in the second quarter of their game Friday at Clarke County High School. The Cougars sacked Childs five times and held Clarke County to 157 yards in a 21-7 win.

Clarke County's Peyton Rutherford is forced out of bounds by Symeon Balser (bottom) and Freddie Watkins of Stuarts Draft in the first quarter of their game Friday at Clarke County High School. Rutherford had 53 yards receiving on four catches but was held to 48 yards on 16 rushing attempts after picking up 427 yards on the ground in his first two games.

BERRYVILLE — With just under 11 minutes left in the fourth quarter, the Clarke County football team needed just one yard to move the chains on fourth down and keep its hopes alive.

But not much came easy for the Eagles on Friday night at Wilbur M. Feltner Stadium, and Stuarts Draft’s line once again came up huge and stopped 6-foot-1, 240-pound running back Peyton Rutherford for no gain on fourth-and-1 from the Cougars’ 16.

The stop kept the Cougars’ lead at two touchdowns, and they went on to win 21-7 to keep their record perfect at 4-0.

Stuarts Draft used the misdirection of its shotgun wing-T offense to give the Eagles’ fits, but it was the fourth-down stop that best summed up its play on a night when it controlled the line of scrimmage.

"I thought their linemen, on both sides of the ball, did a good job," said Clarke County coach Chris Parker, whose 2-1 team was held to 157 yards, 257 below its average coming into Friday. "We had trouble blocking 'em, and they were moving the ball pretty good.

"We knew that they had some good size and they had some very physical backs. We had trouble. I thought in all phases of the game, they were pretty good."

The Cougars defense set the tone.

“We tell our guys, alignment, assignment and just get to the ball,” Stuarts Draft coach Nathan Floyd said. “On the first drive [when Clarke County scored its only touchdown] we blew a couple assignments. When you face a good team, they’re going to take advantage.

“After that, we were able to communicate better, and we just played a heck of a ballgame on defense, offense and special teams. It’s just a great team win. I couldn’t be any prouder.”

Rutherford passed the 4,000-yard rushing mark for his career last week and had 427 yards for the Eagles in their first two games. But on Friday, he managed just 48 yards on 16 carries and Clarke County’s single-wing attack only had 33 yards on 31 carries as a whole. (Rutherford added 53 yards on four catches.) Stuarts Draft had five sacks, with defensive lineman Jayden Watkins recording three, to strip 44 yards from the Eagles’ total.

“Our defensive line does a good job getting penetration,” Floyd said. “We want to get a push, and they did a heck of a job just bottling things up on the inside. Rutherford’s tough. We were able to get two or three people to him. You can’t single-tackle him. You got to get everybody to the ball, and we did a good job pursuing the ball.”

Offensively, Stuarts Draft picked up 303 yards and got a good push up front late when it bled the clock (Dustyn Fitzgerald led the rushing attack with 84 yards and a TD on 16 carries).

It used its deep pool of athletes to create confusion in Clarke County’s secondary to take the lead on the first drive of the second half after the game was tied 7-7 at halftime.

On second-and-10 from the Cougars’ 46, Henry Cooke went back deep to pass. He had plenty of time to survey the field, and he found Fitzgerald (two catches for 63 yards) wide open on the left side. He caught the ball at the 20 and jogged in for a 54-yard TD. The extra point from Tyler Lingenfelter made it 14-7.

Cooke (7 of 11 for 105 yards and a TD) nearly connected with a wide-open Evans 20 yards downfield on the previous play. Stuarts Draft did well to create openings by sending people across its formation, and Cooke said the Cougars decided to go with the same play after they noticed Fitzgerald was also open when he threw to Evans.

Stuarts Draft forced a turnover on downs when Clarke County threw incomplete on fourth-and-5 from the Cougar 48 on its next possession. Childs rolled right and connected with Jacob Weddle for first-down yardage, but Weddle was ruled to have been out-of-bounds when he caught the ball.

Childs (10 of 16 for 124 yards and a TD) frequently had to move around behind the line of scrimmage to get passes off.

"A lot of times he was running for his life," Parker said.

On the next play after that stop, the Cougars turned to their bag of tricks. Cooke took the snap and handed to Fizgerald, who ran left. Fitzgerald then pitched the ball back to Eddie Watkins, who was running left to right. Watkins then pulled up after a couple of steps and connected with Aaron Nice (12 carries for 50 yards and a TD) all the way across the field near the right sideline on a crossing route for a gain of 35 yards to the Clarke County 17. Two plays later, Fitzgerald scored from six yards out on a spinning run, leaping in for the final few yards to make it 21-7.

"They did a good job executing some of those big plays," Parker said. "When you have those big physical linemen, sometimes you can get away from what you're doing, which is pounding, and do those trick plays and get away with them."

Clarke County then went 66 yards over 13 plays on its next drive, but Stuarts Draft made the key fourth-down stop, and Clarke County never threatened again.

Clarke County scored on its first possession of the game, driving 75 yards on 10 plays. The Eagles finished it off on fourth-and-7 when Childs rolled right and found Weddle wide open at the Stuarts Draft 7-yard line. Weddle took it in the rest of the way untouched and Kellan Dalton’s extra point made it 7-0 with 7:47 left in the first quarter.

Stuarts Draft answered on its next possession after Jo’el Howard set the Cougars up at their own 46 with a 38-yard kickoff return. The Cougars drove 54 yards over 10 plays, with Nice finishing it off with a five-yard run around the right side and a dive inside the pylon with 2:43 left in the first quarter. Lingenfelter’s extra point made it 7-7.

Stuarts Draft had chances to add to its lead, but its next two possessions ended in Eagle territory.

After a 32-yard punt put the Cougars at the Clarke 46, Fitzgerald was stopped one yard short of a first down on fourth-and-3 to give the Eagles the ball at their own 37.

Stuarts Draft started its next drive at its own 12 and drove 41 yards to the Eagle 47. But on second-and-6 Watkins tried to leap over a pile in the middle after taking a direct snap. The ball popped out at the 45 and the Eagles recovered at their own 42 with 3:14 left in the second quarter.

The Eagles moved quickly on their next drive, with Childs connecting with Rutherford two times for 27 yards to get to the Stuarts Draft 31. But an illegal procedure and two sacks on the final two plays resulted in the Eagles having the ball at their own 40 as the first-half clock expired.

Clarke County now goes into its Bull Run District schedule next week at home against East Rockingham. The Eagles last seven games will be within the district.

"We told the team at the end that we knew it was going to be a tough game," Parker said. "One game doesn't define us. We wanted to win, but we have to come back Monday, work hard and correct mistakes. We can't let this game beat us twice."