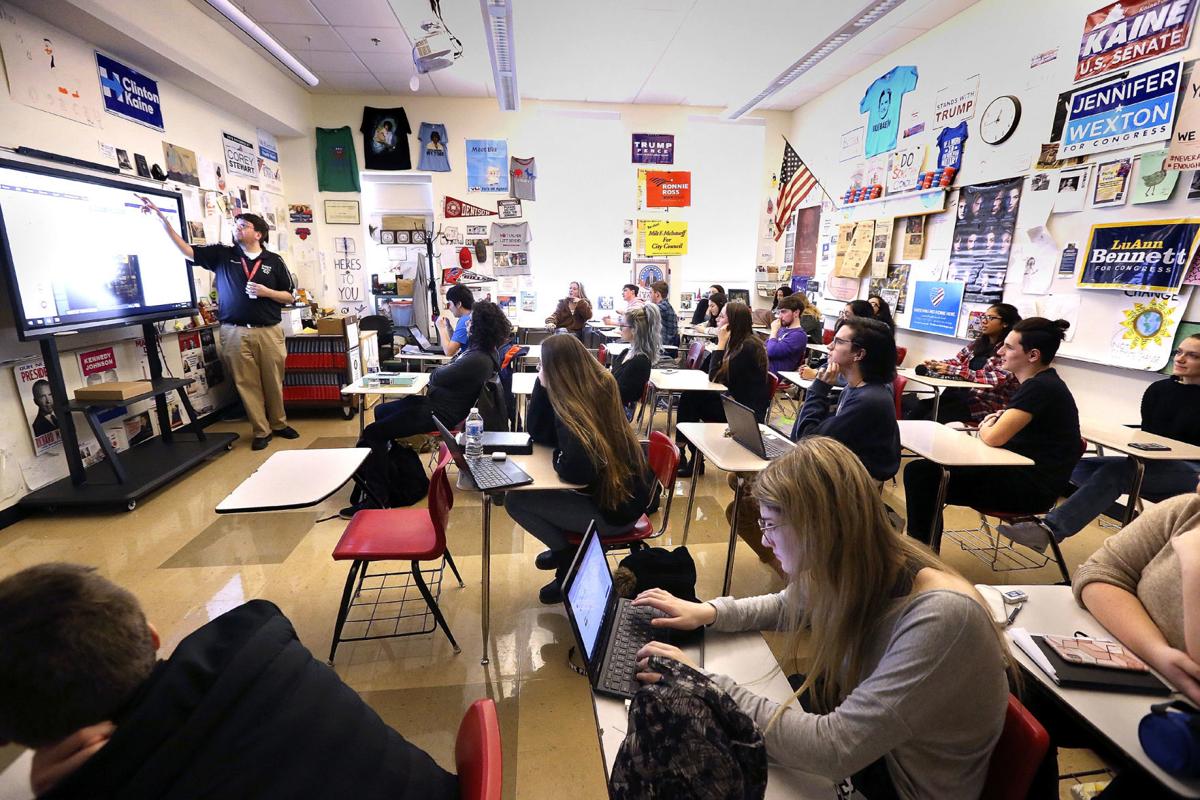 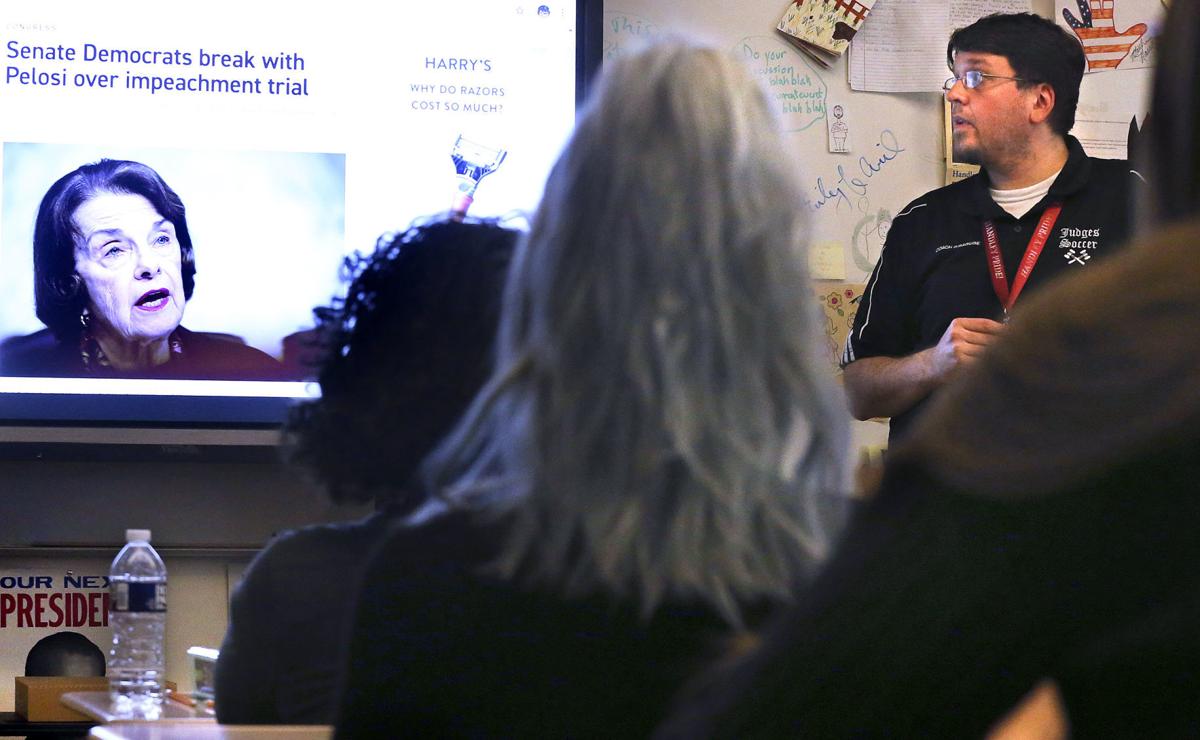 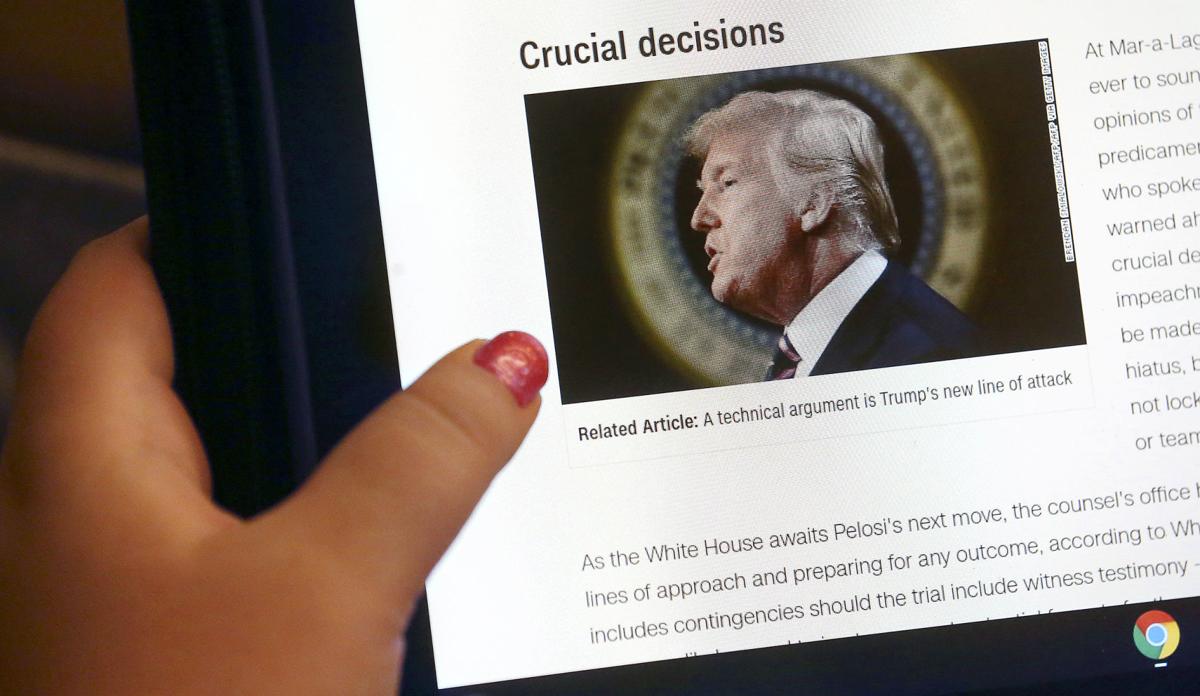 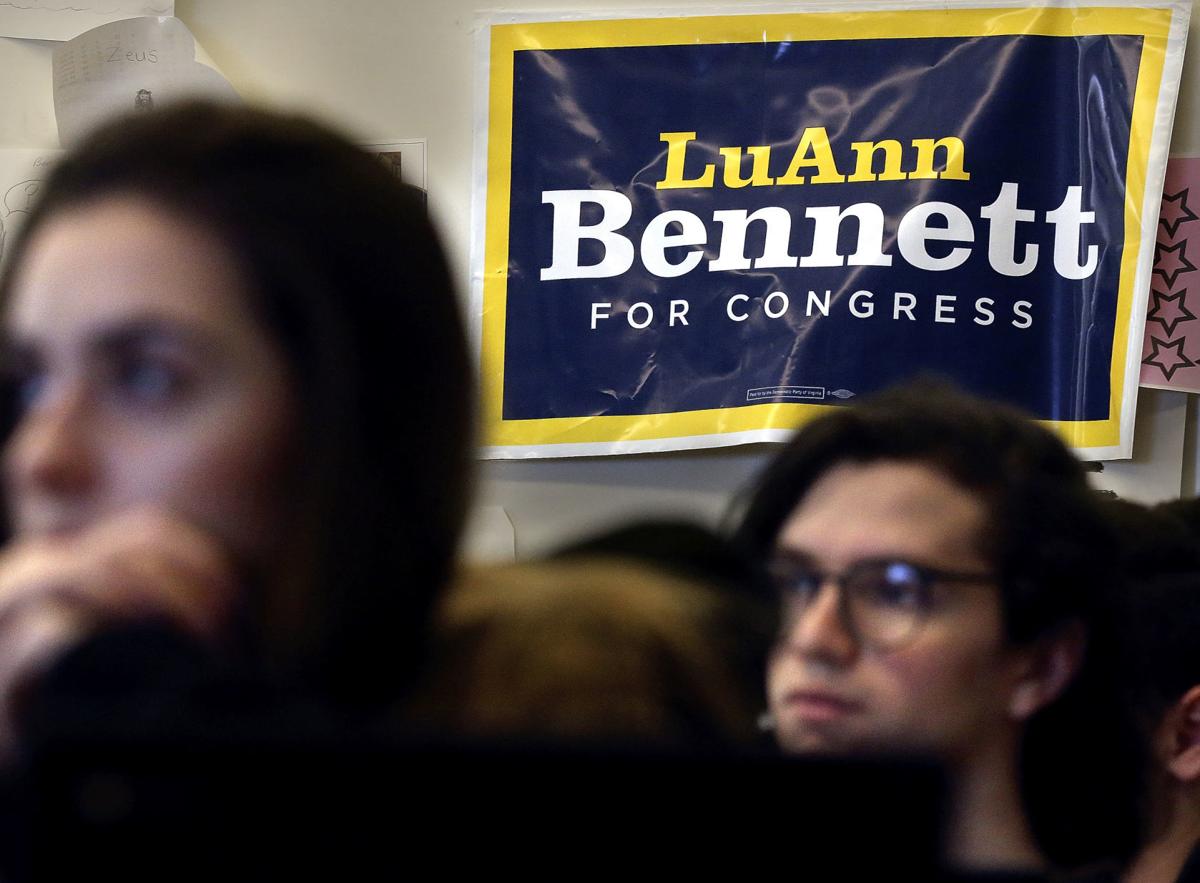 WINCHESTER — With almost daily developments about efforts to impeach President Donald Trump and now tensions with Iran, some high school government teachers find themselves occasionally tossing out their lesson plans to teach alongside the headlines.

At least that’s the case in the classroom of Handley High School government and politics teacher Michael Siraguse. On a recent day, he scratched his lesson plan on elections so his students could watch the impeachment hearings live on the classroom’s SMART Board.

Siraguse said he asked his class to ponder how the impeachment process could impact November’s elections.

“Sometimes we’ll just throw the entire plan out for whenever and just talk,” he said, adding that the curriculum is broad enough to allow for that kind of flexibility.

While other teachers might not change their lesson plans so quickly, they sometimes pause to answer questions regarding current events.

Some of the questions that students have asked recently include: Has Trump been removed from office as a result of the impeachment proceedings? Will the U.S. get into another war? Will they be drafted into the military?

“They hear things, and they have a lot of misconceptions,” said David Ravenscroft, head of the social studies department at Clarke County High School.

Discussing how impeachment works is planned further down the line in Ravenscroft’s government classes. When the time comes, he will use current events as a way to illustrate it, he said.

“The challenge is to explain it to them in terms that they understand and kind of getting beyond their preconceived notions,” Ravenscroft said. “I think my role is maybe more to challenge them and to see both sides, which is not easy to do these days.”

D.J. Cavalier, supervisor of social studies and health and wellness education for Frederick County Public Schools, said any discussions about impeachment or Iran are taking place in the division’s eighth-grade civics courses and 12th-grade government classes. The curriculum is not rearranged for current events, he said, but they are often discussed at the beginning of class.

Cavalier added that the role of government teachers is to explain the “nuts and bolts” and the meaning of a current event.

“Teachers are really responsible,” Cavalier said. “We try to be the umpires of the game.”

In a few weeks, when Siraguse’s government class touches on congressional powers, his students will read the impeachment charges against Trump made by the House of Representatives.

He hopes his students can watch the Senate impeachment trial in class.

“You all literally over the last month have lived through actual history,” he told his students. “When we think 20 years from now, last month will be in history books.”

To remove a president from office, he explained, requires 67 votes in the Senate.

“The TikToks were hilarious,” one student said about WWIII discussions on the social media video app.

Siraguse asked students if they think Trump is using the situation with Iran to distract from the impeachment proceedings, then provided them with seven documents to review to possibly use to justify their answer.

Cammi Sanders, a 17-year-old senior, was unsure. She noted the Trump administration said the general was planning on attacking Americans.

“That’s kind of like a war-waging move, because that’s like the equivalent of them assassinating one of our top guys,” she said.

Katie Hays, also a 17-year-old senior, said while Soleimani’s killing is a distraction, she’s not sure if it was an intentional one. Either way, she doesn’t think it will have much effect.

“I think the Democrats are finding any reason possible to find a way to get this man out of office, because they hate him so much,” Katie said.

Senior Max Hamme, 17, said he thinks it’s great the House is “putting [Trump] in his place.”

Whatever the outcome, Cammi said Siraguse’s class has helped her understand how the impeachment process works and how the House and Senate are separate bodies.

Thanks to the demokrat party, they get ringside seats to a circus with ringmaster Schiff.