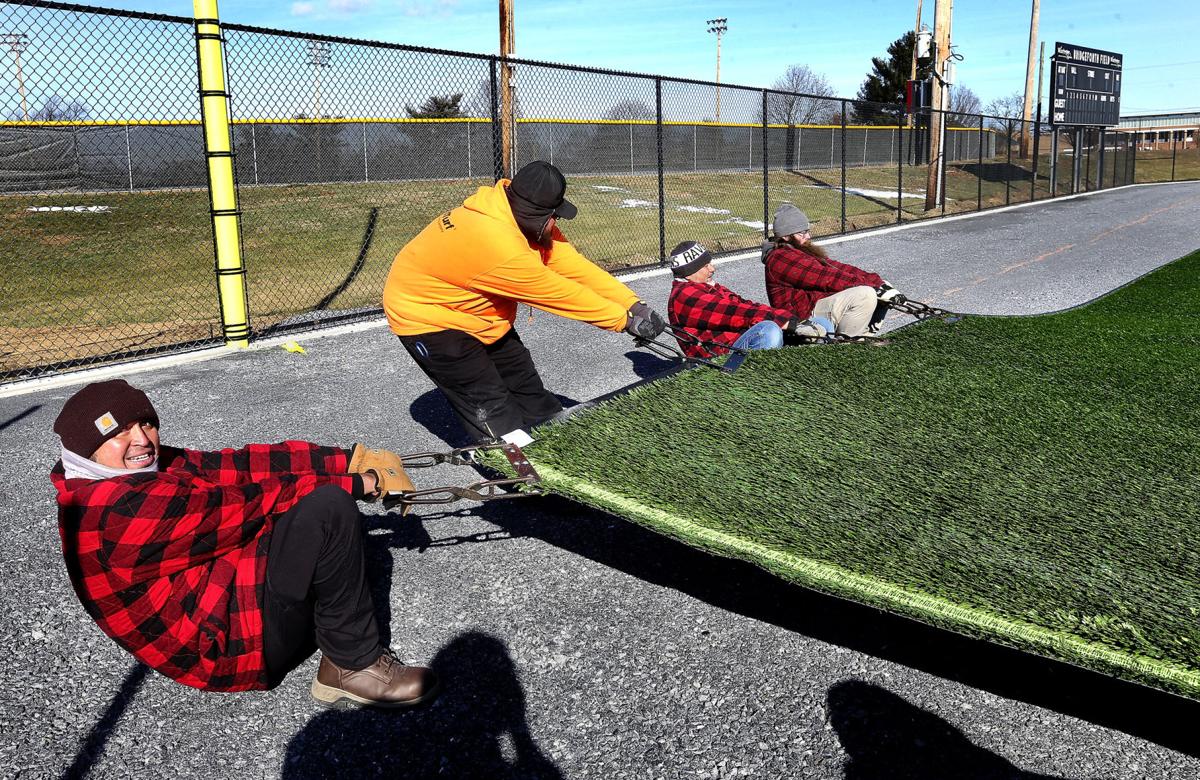 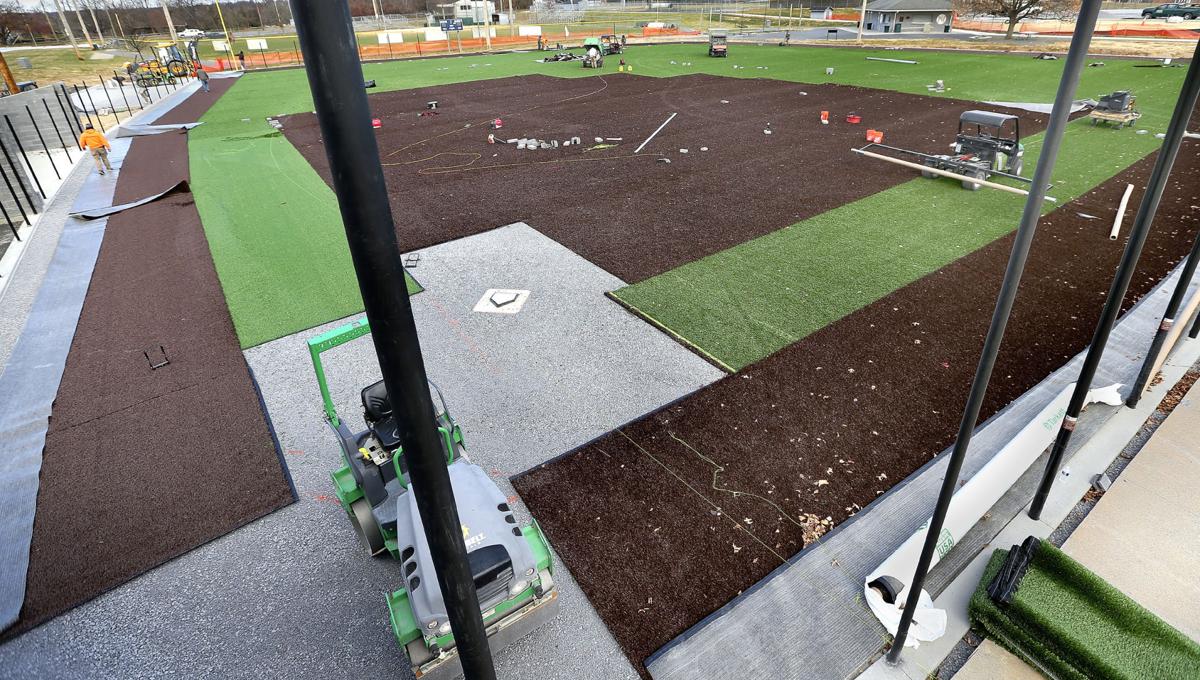 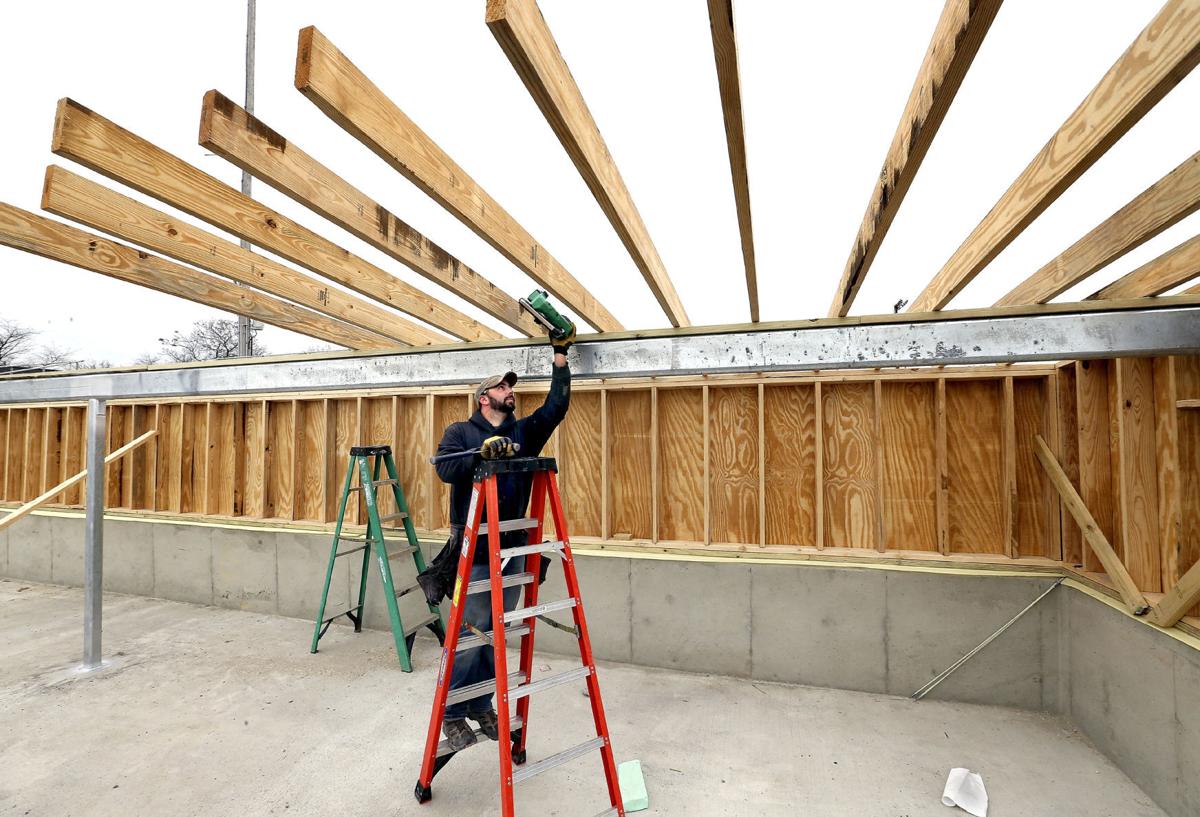 Carroll Construction of Winchester employee Mike Palumbo builds the new third base side dugout at Bridgeforth Field in Jim Barnett Park in December. 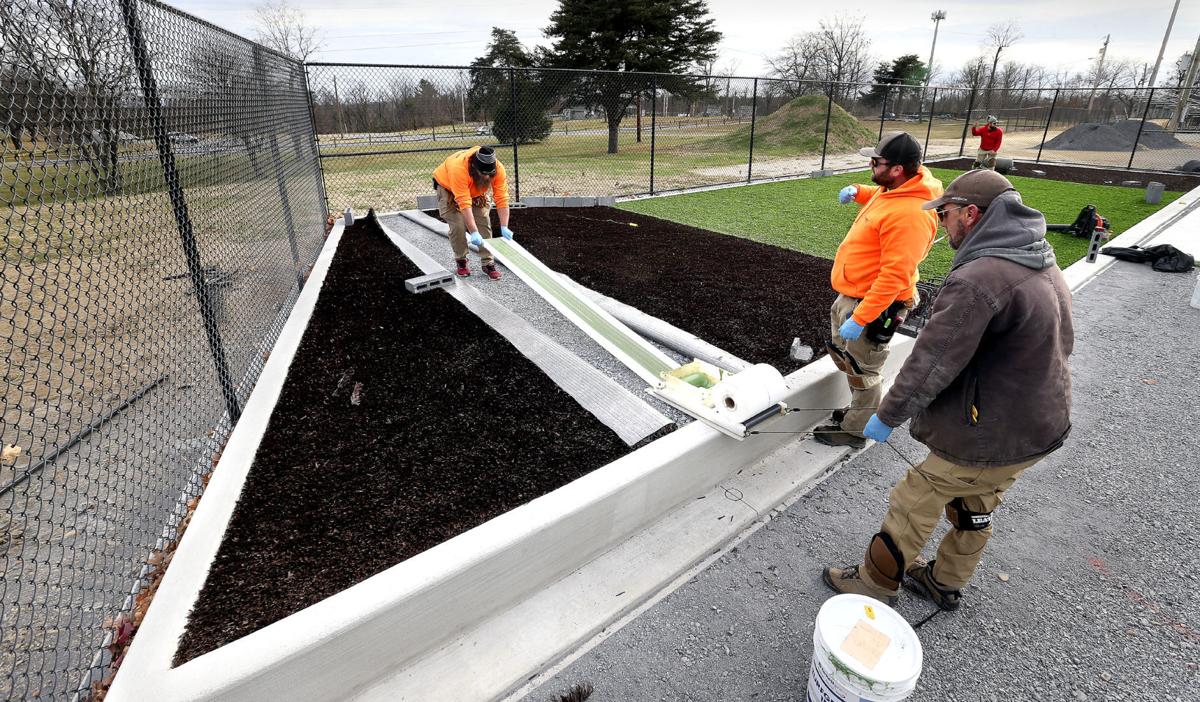 Employees of FieldTurf glue two pieces of synthetic turf together on the new first base side bullpen at Bridgeforth Field in Jim Barnett Park in December. SU director of athletics Bridget Lyons hopes the new artificial turf infill system will be completely installed this week. The Hornets baseball team begins practice on Jan. 24.

Carroll Construction of Winchester employee Mike Palumbo builds the new third base side dugout at Bridgeforth Field in Jim Barnett Park in December.

Employees of FieldTurf glue two pieces of synthetic turf together on the new first base side bullpen at Bridgeforth Field in Jim Barnett Park in December. SU director of athletics Bridget Lyons hopes the new artificial turf infill system will be completely installed this week. The Hornets baseball team begins practice on Jan. 24.

Shenandoah University baseball and softball practices are going to be a lot easier to deal with this January.

Both teams will begin practicing for the 2022 season in the next two weeks at Jim Barnett Park, and both the softball team’s Rotary Field and the baseball team’s Bridgeforth Field are expected to be ready for use.

Both fields will feature FieldTurf artificial turf infill systems after they were previously grass fields. Rotary Field was completely converted to an artificial turf field in December, and Shenandoah University director of athletics Bridget Lyons said on Monday that SU would like to see Bridgeforth Field’s artificial turf installation finished this week as well.

“Most of the turf has been installed, so we’re hoping this week that that will be complete,” Lyons said.

Renovations to Bridgeforth and Rotary began on Aug. 1, when SU formally assumed a 40-year management of the fields from the City of Winchester. SU initially hoped to have most of the estimated $4 million in field upgrades completed by Dec. 1 of last year, but Lyons said there are still some things besides the turf installation that need work. In addition to FieldTurf, Clark Companies of Delhi, N.Y., is also working at Jim Barnett Park.

Lyons said painting, fence upgrades and electrical work for both fields are not completed yet. Lyons said heaters in both dugouts need to be installed, and SU is still waiting on benches and bat racks to arrive. Lyons did not provide a timetable for when those situations will be completed.

Lyons said both fields will receive new scoreboards, but SU is still waiting on a delivery date. In case the scoreboards don’t arrive by the beginning of February, SU will use the ones that are currently in place.

Lyons said the parking lot area by Bridgeforth and Rotary will be redone, but she believes that likely won’t be finished until the summer.

Lyons said even though SU’s goal was to have the artificial turf, dugouts and fencing done by Dec. 1, it wasn’t a mandate for the university and its construction partners.

“Obviously, we want everything done well,” Lyons said. “The good news is that we’ve had good communication with Clark, so nothing has caught us off guard. When you have a project, you’re never 100 percent sure what it’s going to take. We’re feeling good with where we’re at, and we’ll feel better once the turf is down at baseball.”

While the past couple of months haven’t produced significant precipitation prior to last week’s snow, strong winds are another factor that can cause a delay in turf installation.

The main thing is that once the artificial turf is down, the baseball team can compete. And Lyons can’t wait to see what the future holds for both teams with artificial turf in place. The baseball team has played in 11 of the last 13 NCAA tournaments and is consistently ranked among the nation’s top 25 teams, and the softball team is looking to build under third-year head coach Courtney Moyer.

“We certainly were excited when they broke ground,” Lyons said. “Now, especially at softball with the turf down and the way the dugouts look at both fields, it makes it real. I think it’s just going to be an incredible place to compete for both of those teams as well as the other users [of those fields].

“It’s going to be really, truly a place for us to call home. And just the advantage of not having to cancel as many games because of weather-related issues. We had a lot of flooding happen at Bridgeforth. Having the turf field, it will keep our schedules more intact than they have ever been. In the future, I hope this will be a destination for some of the northern schools to come down and play us because of having the turf.”

Old man winter gonna have a say on this!

Weather forecasters are talking about a potential double digit snow event coming into our area on Sunday into Monday.