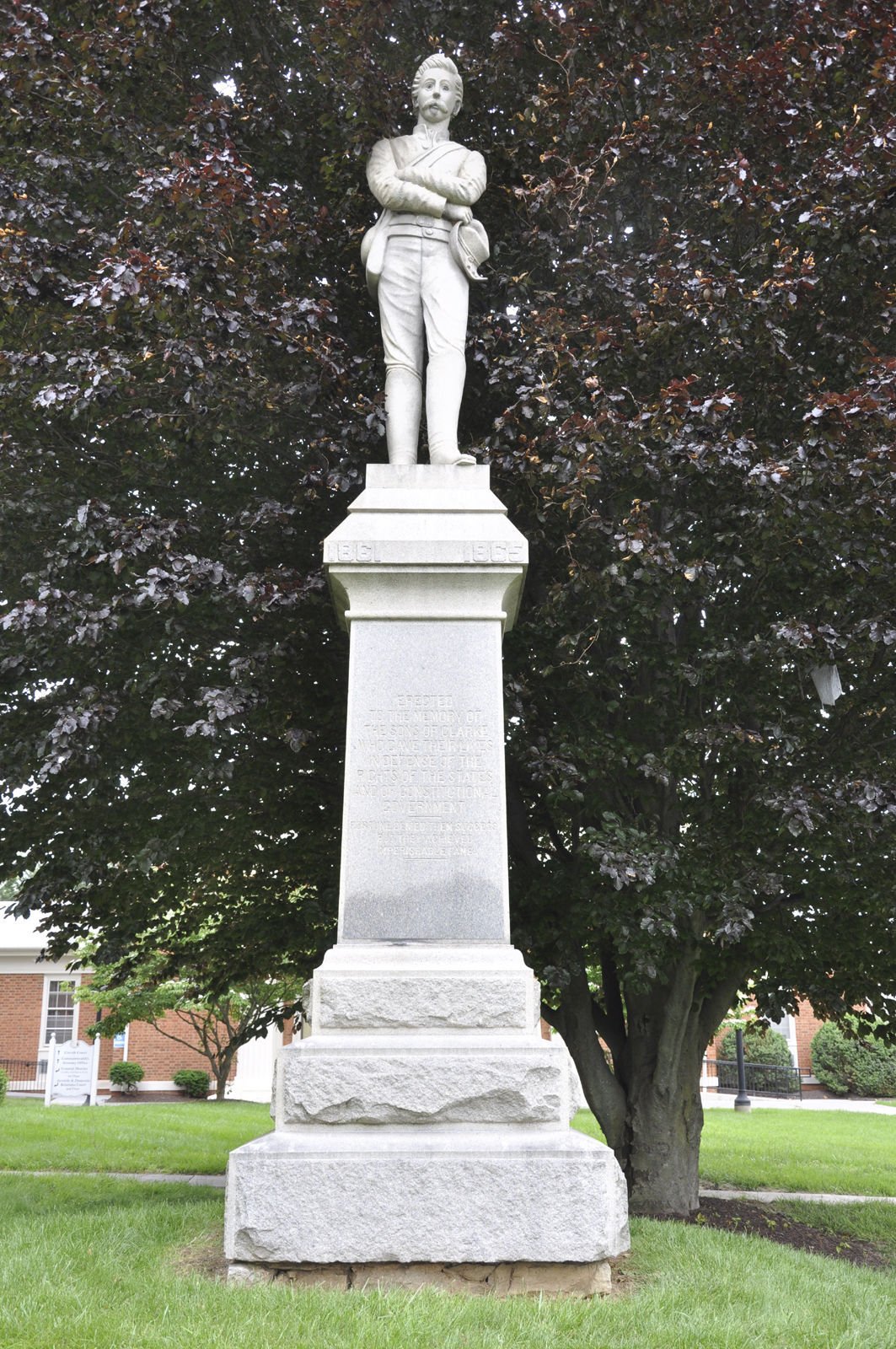 This 1900 granite monument called “Appomattox” stands outside the Clarke County Courthouse in Berryville. The Board of Supervisors is forming a committee to explore options on what to do with the statue. 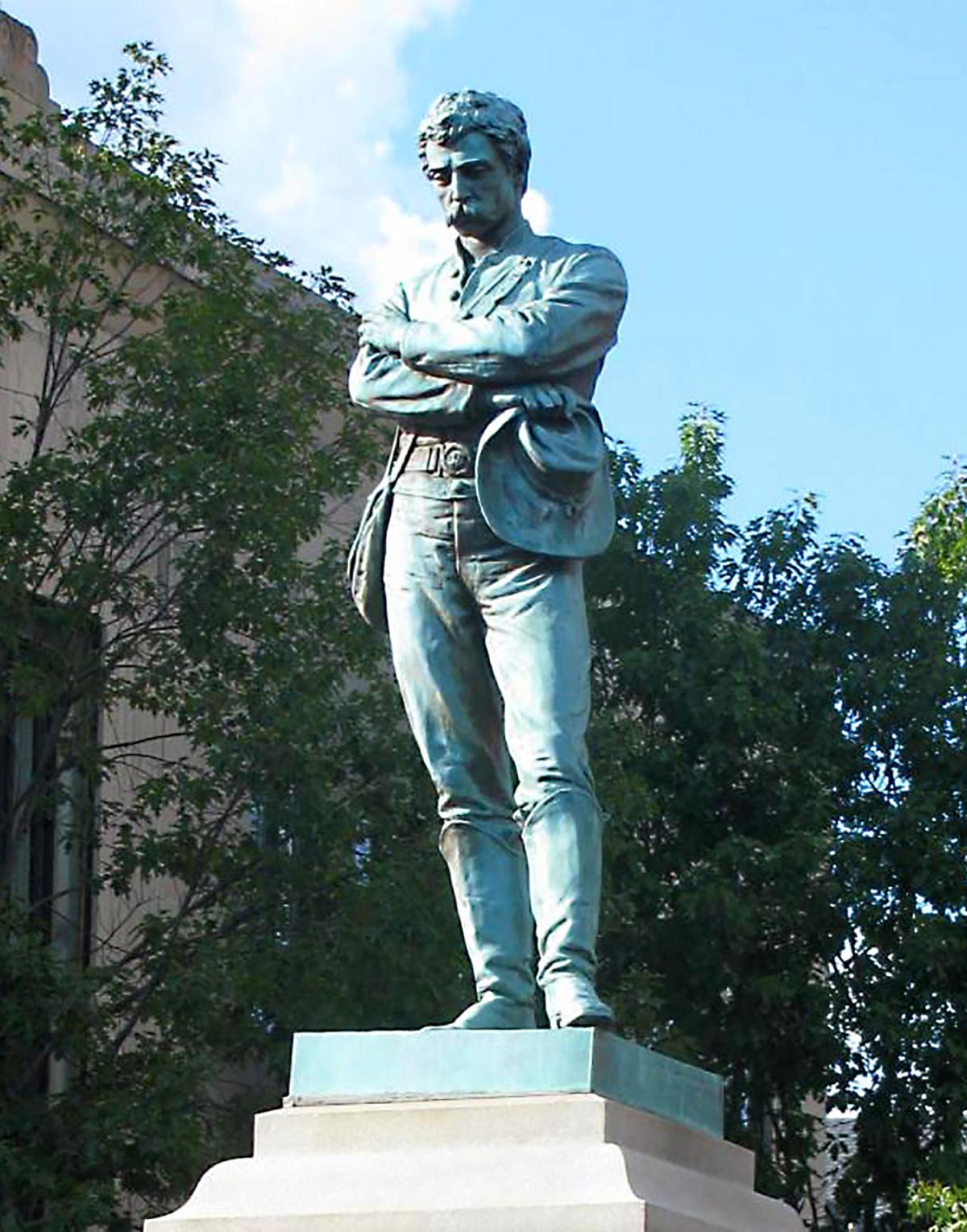 1889 bronze sculpture titled “Appomattox” by M. Caspar Buberl; based on the painting.

This 1900 granite monument called “Appomattox” stands outside the Clarke County Courthouse in Berryville. The Board of Supervisors is forming a committee to explore options on what to do with the statue.

1889 bronze sculpture titled “Appomattox” by M. Caspar Buberl; based on the painting.

BERRYVILLE — It will take months to decide the fate of a controversial Confederate monument outside the Clarke County Courthouse, county officials maintain.

As of Friday morning, at least six people have voiced interest in serving on a citizens committee that will explore options, Clarke County Board of Supervisors Chairman David Weiss said. The board announced its plans to form the committee earlier this week.

“People are very interested in how the committee is to be set up and will find a resolution to the quandary we were presented with,” said Weiss, who represents the Buckmarsh District.

County Administrator Chris Boies said it hasn’t yet been determined how appointments to the committee will be made or what the panel’s exact scope of work will be.

“We need a little time to make sure we develop a structure to support the committee that enables it to succeed,” Boies said, referring to county officials.

It will take “a number of months” just to establish the committee, Weiss said.

The courthouse is on North Church Street in downtown Berryville. Weiss said he’s hearing comments both for and against keeping the monument there.

“The issue,” he said, “comes down to how history should be remembered and how the county is to be sensitive to memories it involves among some people (including African Americans) within the community.”

With its Civil War connection, the monument has been a painful reminder of the South’s support for slavery, county resident Ross Oldham believes. In June, he asked the county to move the monument to “a more appropriate location of historical learning,” such as the Clarke County Historical Society or the Battle of Berryville site.

But the county legally cannot move the monument, according to lawyer Robert Mitchell, because it doesn’t own the small piece of land on which the memorial sits.

One person seeking to keep the monument outside the courthouse is Berryville resident George Archibald. He wants to be appointed to the committee “so that I might work with you further in behalf of the monument’s retention,” he wrote on Wednesday in a letter to Weiss, a copy of which he emailed to The Winchester Star.

Archibald wrote that the monument has “been enjoyed by generations of our community ever since” it was erected in 1900. He mentioned that one of the reasons why he moved to his apartment on North Church in July was because “my front window looks directly upon this historical monument.”

“Certainly my own rights and desires should be equally considered and upheld in a non-discriminatory fashion” alongside Oldham’s, he wrote.

His letter asks that Oldham’s request be denied.

Oldham’s remarks to the supervisors started conversation about the monument, Weiss said. “But the conversation is continuing at the board’s discretion,” he emphasized.

Manufactured by the Petersburg Granite Co., the monument was erected more than 30 years after the Civil War ended to honor the county’s Confederate veterans. The soldier depicted in its statue is based on a 1889 bronze sculpture by M. Caspar Buberl and titled “Appomattox,” according to county Architectural Historian Maral Kalbian. The sculpture is based on a painting of the same title by John Adams Elder a year earlier.

Research has revealed that the monument is not on the courthouse lawn but rather on a small parcel technically owned by the Association of the Survivors of the Clarke Cavalry (ASCC). The association disbanded long ago — its last annual meeting on record was held in 1918, Kalbian told the supervisors.

Sixty-four surviving members of the Clarke Calvary established the ASCC in 1884, Kalbian said.

In 1916, the ASCC asked the Stonewall United Daughters of the Confederacy to take responsibility for the monument when the association ceased to exist. However, Kalbian’s research uncovered no evidence that the Daughters ever did, and that organization disbanded in 1932.

The county’s conundrum, said Mitchell, its part-time attorney, stems from the parcel having been titled to the incorporated association, not its individual members. As a result, “their descendants own the property” now, he said in rendering a legal opinion.

Who knows who, or where, the descendants are?

It’s rare for local governments to have to deal with such an issue, Mitchell said.

So the citizens committee’s work to help decide the memorial’s fate could be complicated.

Berryville District Supervisor Matthew Bass is optimistic about the outcome, though.

“One thing I’ve always loved” about Berryville and Clarke County, Bass said, “is that people talk to each other. So I have great faith” a solution will be reached.

Bless all of your hearts, please read the minutes of the Board of Supervisors June meeting and the subsequent reporting by The Star. The effort is to relocate the monument to a more appropriate location. It is not, nor ever been, an effort to eradicate, destroy, bury face down, or an attempt to rewrite history. It doesn't belong sitting center stage at the county courthouse in the shadow of the American flag.

Again, much of US history is ugly by today's standards, but we learn nothing by burying it. So again I say "educate, do not eradicate."

What to do with it?? NOTHING, leave there it is history, stop the libs from erasing history!!

What history lessons are being deleted from the record with the removal of these second place finisher in a two-horse race trophies?

So if its private property why are using county tax payer resources to maintain it? It costs money to mow the private property grass around it and it looks pretty clean too. Is the county periodically cleaning it as well? Slippery slope here. The county says it has no authority to move it but it appears the county has be maintaining it for some time.

We should not be so flippant in condemning these Confederate veterans by judging them by today’s values. By these standards, we would need to erase much, if no most, of our history. With that said, if the county truly can’t move the statue, they should strongly consider putting up contextual signage so people can informed that this statue is not just a memorial to war dead, it is also linked to the Lost Cause and Jim Crow.

I also believe this article may have some inaccuracies. The way I understand, the County lawyer said the descendants have no right of ownership due to the manner the veteran association was incorporated.

@cfmaurer - A thoughtful, measured response and so will be ignored by the radical Left because they want nothing more than to erase history...

So because Jim Crow, "Black" codes, and other forms of institutional racism were acceptable at the time this monument was raised, then we shouldn't judge them on the actions as we see them now, correct?

The statue and twenty five feet around it is private property! It was deeded to a Clarke county Confederate organization over a hundred years ago. County has no legal right to decide fate of statue.

But if public funds are being used to maintain it...

Does "ShawFamily" live there? Probably not. Big talk, nameless one.

Reclaim the parcel as “abandoned”. Then, bury the statue, face down in a Confederate cemetery nearby with the inscription: “Here lies the failed attempt to seceed from the Union. Here lie the defenders of slavery. Here lies the Lost Cause.”

Totally agree w/ Slowe- Throw out the trash and turn the page to the 21st century. And good riddance!

Oh really trash? Well maybe some people consider your sort trash. You can’t judge the dead. YOU may not want to honor those that fought during the CW for the South but remember Virginia was a part of the CSA! And apparently you live in one of the Southern states so stop the hate already.

So slavery is ok because it was legal back then, right?

These soldiers did not believe in slavery, the didn’t want to be invaded by the North or pay the tariffs. If you want to continue the hate and erase history keep it up. You need to learn from the past, you cannot judge the citizens of the South from over 160 years ago! Idiotic!

Actually, it wasn't a matter of belief. Slavery existed and Southerners, slave-owners or not, depended on its existence. The economics of the tariffs and every other ancillary reason cited by apologists always ends up being rooted in slave labor.

Pick up a book and stop being so emotionally tied over a country that you never lived in.

I couldn't have said it better myself, Will. You know how it is, there's no cure for stupidity.