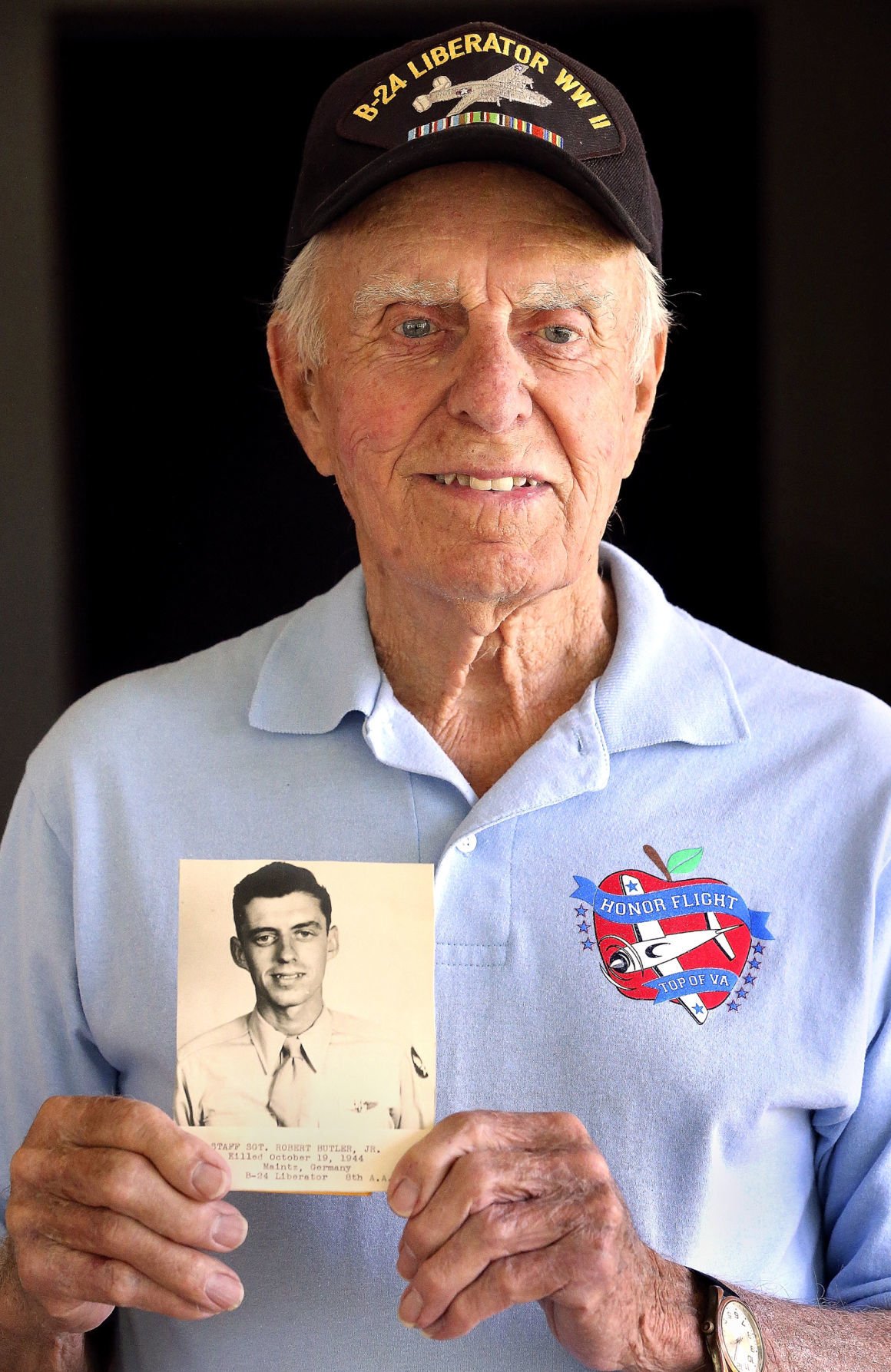 Winchester resident Doug Butler holds a photo of his brother, Staff Sgt. Robert Butler, Jr., an engineer/gunner in the B-24 Liberator aircraft, who was killed Oct. 19, 1944 when his plane collided with another over Maintz, Germany. Doug Butler was a nose turret gunner in a B-24 Liberator heavy bomber for 35 missions over Germany. 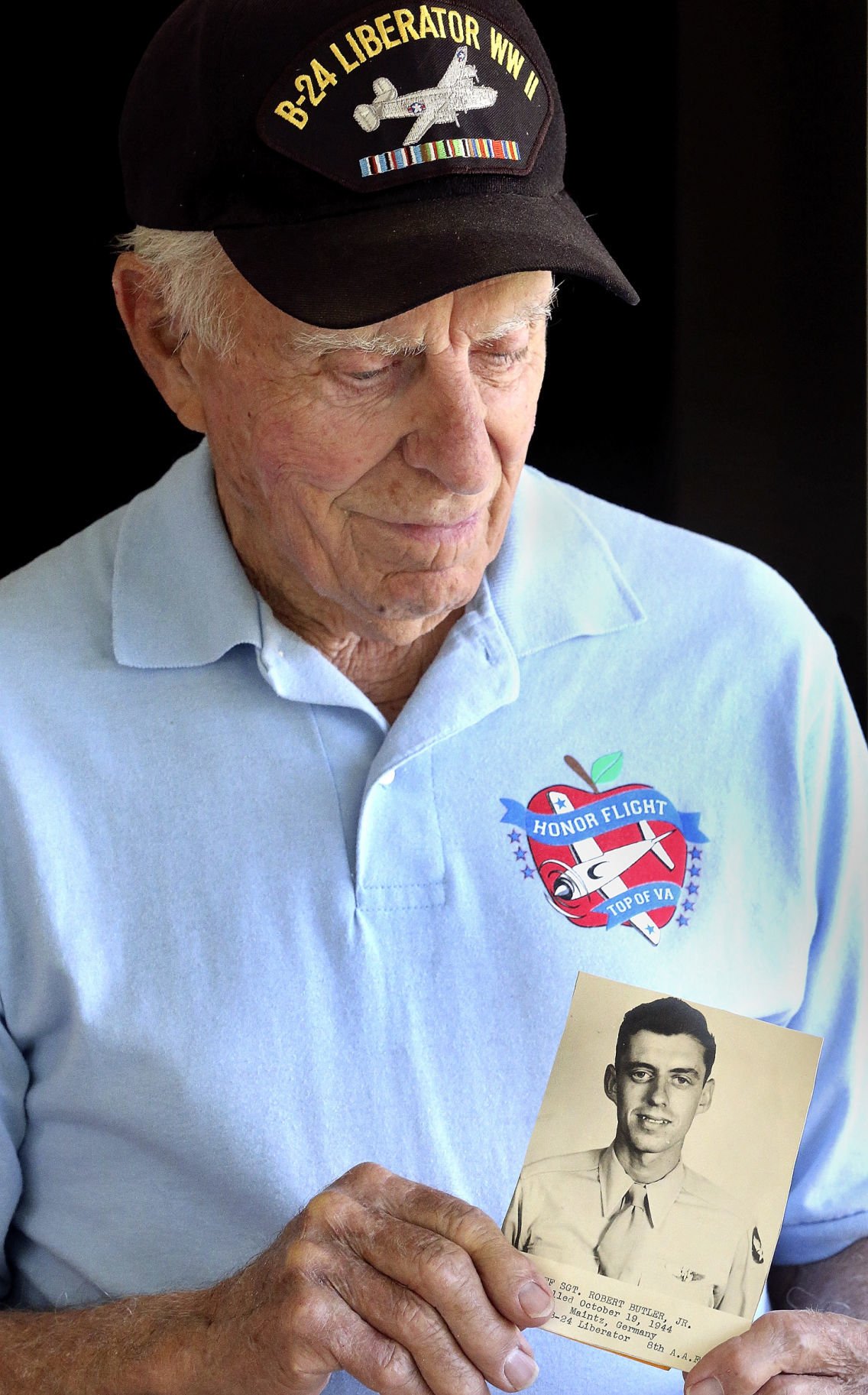 Winchester resident Doug Butler holds a photo of his brother, Staff Sgt. Robert Butler, Jr., an engineer/gunner in the B-24 Liberator aircraft, who was killed Oct. 19, 1944, when his plane collided with another over Maintz, Germany. Doug Butler was a nose turret gunner in a B-24 Liberator heavy bomber for 35 missions over Germany. 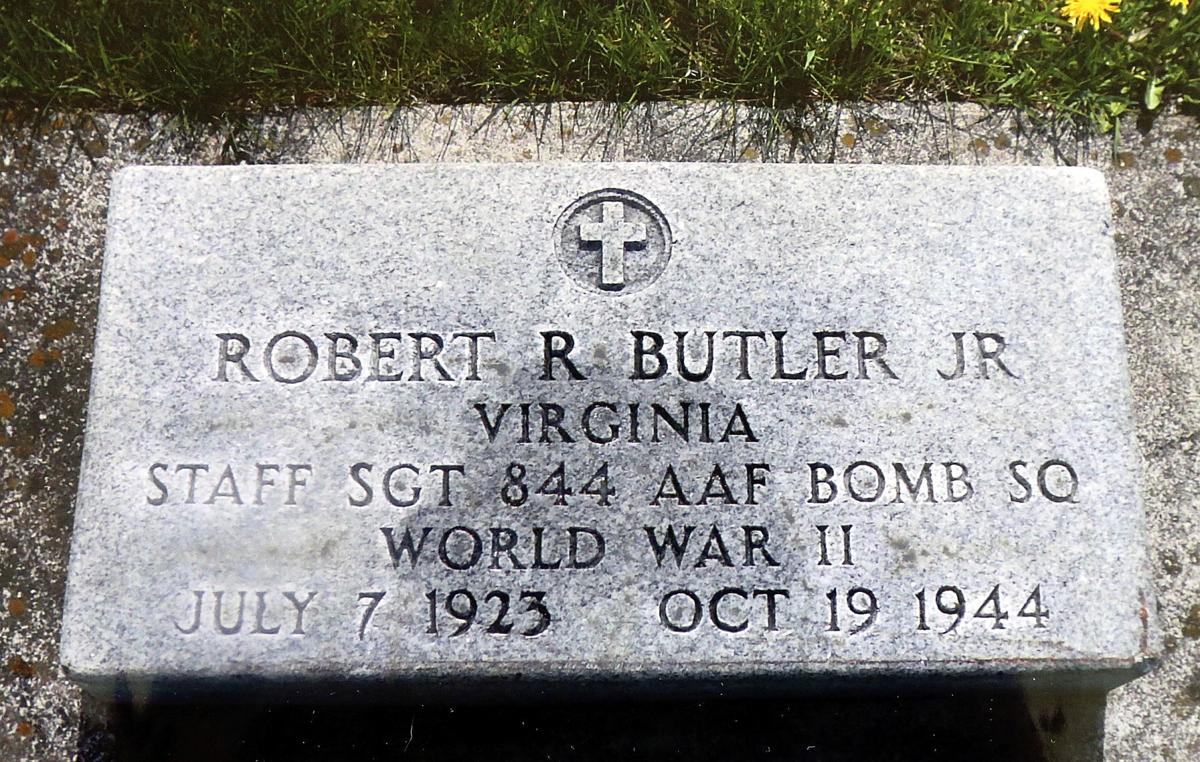 Frederick County resident Staff Sgt. Robert R. Butler, Jr., who was killed Oct. 19, 1944 when his B-24 Liberator heavy bomber collided with another plane over Maintz, Germany, rests in Mount Hebron Cemetery in Winchester. 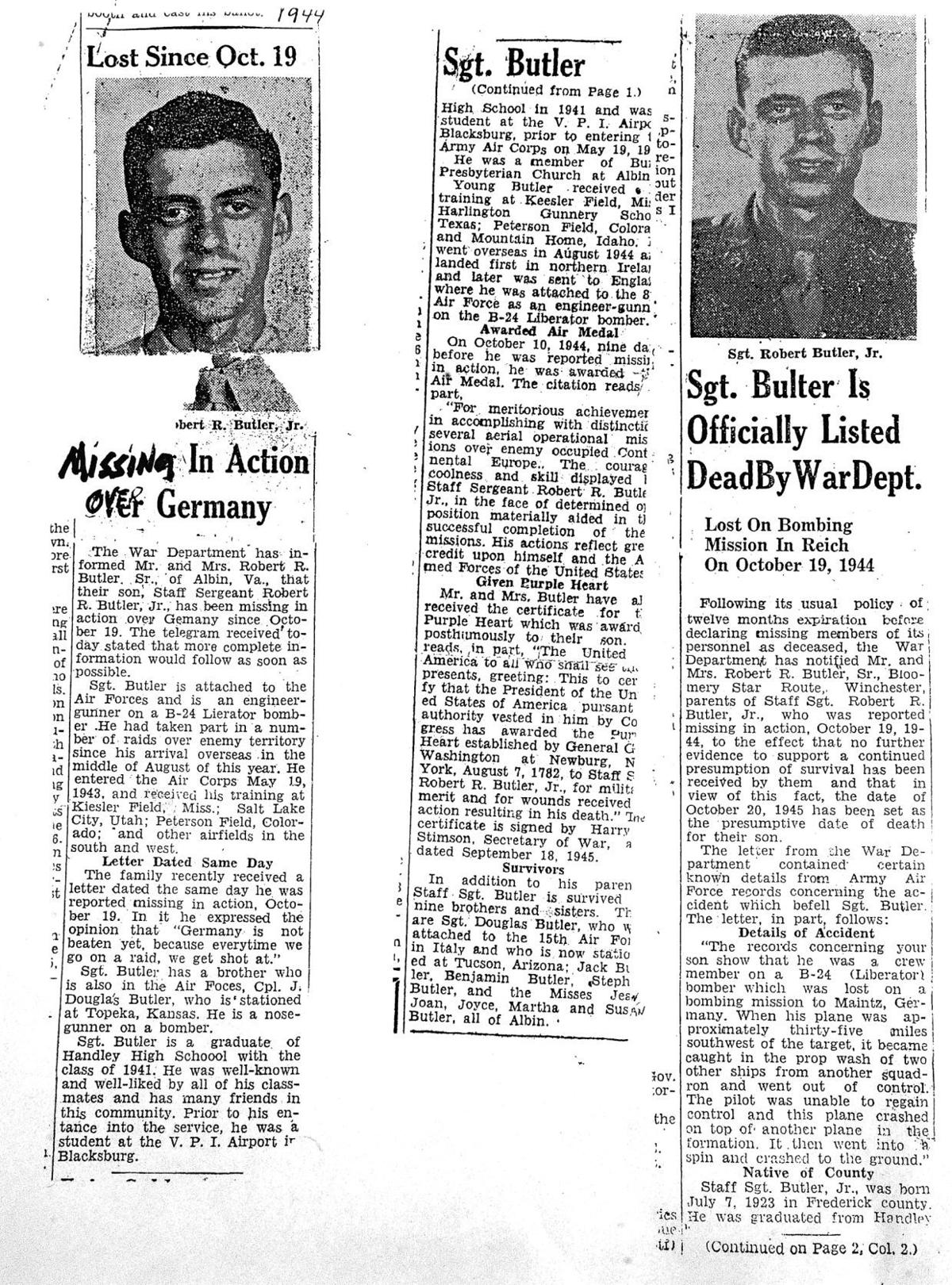 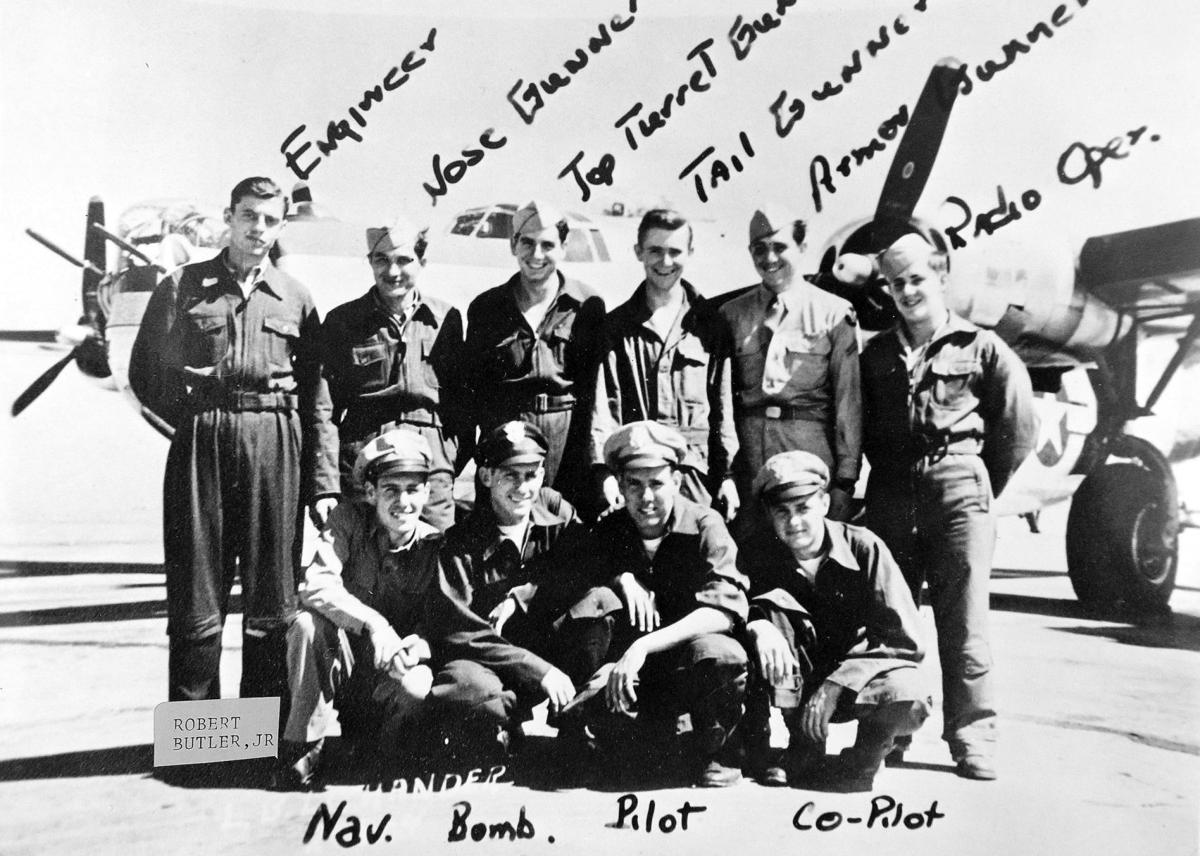 Frederick County resident Staff Sgt. Robert R. Butler Jr. (back row at left) was killed Oct. 19, 1944, when his B-24 Liberator heavy bomber collided with another plane over Maintz, Germany.

Winchester resident Doug Butler holds a photo of his brother, Staff Sgt. Robert Butler, Jr., an engineer/gunner in the B-24 Liberator aircraft, who was killed Oct. 19, 1944 when his plane collided with another over Maintz, Germany. Doug Butler was a nose turret gunner in a B-24 Liberator heavy bomber for 35 missions over Germany.

Winchester resident Doug Butler holds a photo of his brother, Staff Sgt. Robert Butler, Jr., an engineer/gunner in the B-24 Liberator aircraft, who was killed Oct. 19, 1944, when his plane collided with another over Maintz, Germany. Doug Butler was a nose turret gunner in a B-24 Liberator heavy bomber for 35 missions over Germany.

Frederick County resident Staff Sgt. Robert R. Butler, Jr., who was killed Oct. 19, 1944 when his B-24 Liberator heavy bomber collided with another plane over Maintz, Germany, rests in Mount Hebron Cemetery in Winchester.

Frederick County resident Staff Sgt. Robert R. Butler Jr. (back row at left) was killed Oct. 19, 1944, when his B-24 Liberator heavy bomber collided with another plane over Maintz, Germany.

WINCHESTER — J. Douglas Butler remembers having to tell his mother in 1944 that his brother Robert R. Butler Jr. was missing in action and presumed dead.

“Being the oldest son, she was pretty broken up. I knew if he was missing in action he was pretty well gone,” recalled the 95-year-old Butler, then a corporal and nose turret gunner with the U.S. Army Air Corps (now the U.S. Air Force). “So mother had a gold star in the window and a blue star. One for each one of us.”

When America honors its war dead on Monday, Butler will be remembering his brother. Staff Sgt. Robert Butler was one of 407,316 airmen, Marines, sailors and soldiers killed in combat and non-combat deaths in World War II, according to the National World War II Museum. Approximately 1.2 million troops have died in all of America’s wars combined, according to Department of Defense and U.S. Department of Veterans Affairs statistics.

Born in 1923, Robert Butler was the oldest of 10 children and about 17 months older than Doug Butler, the second oldest child. They grew up on the Two Oak family apple farm on North Frederick Pike (U.S. 522). They worked on the farm and rode bicycles five miles each way to Handley High School before Robert Butler got a car in his senior year.

Robert Butler graduated in 1941 and Doug graduated a year later. The elder Butler was a mechanic at VPI Airport in Blacksburg (now Virginia Tech Montgomery Executive Airport) before being drafted. Neither sought a farm deferment.

“I said, ‘Hell, I’d rather go fight somebody than stay on this farm,” Doug Butler said. “That was hard work then. From sunup to sundown.”

Both brothers were drafted in May of 1943 and took the Oath of Enlistment together. When asked who wanted a week to get their affairs in order before basic training, Doug Butler said he quickly stepped forward, but his brother declined.

But the brothers would meet one last time. Unlike his brother who was drafted into the Army Air Corps, Doug Butler was drafted into the infantry but was able to transfer to the Air Corps. He figured his chances of survival were better as an airman. And he surmised that the more training he took, the longer he would stay out of combat. After completing basic training, Butler applied to be a pilot, but pilots were no longer needed so he ended up being a gunner.

The younger Butler was on his way to training when the brothers had their last meeting. It was in late 1943 in Gulfport, Miss., where Robert Butler was training. Douglas Butler said his brother was happy to hear he had gotten out of infantry duty. They spoke for about an hour before shaking hands and wishing each other luck.

Robert Butler became a flight engineer and gunner on a B-24 Liberator bomber. He went overseas to England in August of 1944 as part of the Eighth Air Force.

Combat is inherently dangerous, but the American military has gotten better at protecting its troops as technology and tactics have evolved. The military now relies more on drones, reducing manned flights. And computers and GPS reduce human error during manned flights. But during WWII it was charts, protractors and flying by the seat of the pants in electric suits to keep from freezing to death inside planes where temperatures dropped to 20- to 40-degrees below zero.

Planes were new and often made by companies with no aircraft manufacturing experience like car makers Ford and General Motors. And pilots were inexperienced, so more accidents happened.

The U.S. sustained 52,173 aircrew combat losses during the war, according to an article on the Real Clear History website by writer and World War II historian Robert Blanchard. But another 25,844 died by accident. Accidents claimed one-third of all aircrew deaths including many during training flights.

Those who survived training and joined the Eighth Air Force were expected to fly 25 to 30 sorties, although there was no set quota. Between September of 1944 when Robert Butler had just begun flying missions and April of 1945, bomber crews flew an average of 35 missions and fighter pilots flew 270 hours prior to rotation, according to a 1968 Air Force historical study of combat crew rotations in WWII and the Korean War.

In a contentious debate with echoes of Catch-22 — a man was crazy to willingly fly combat missions but if he asked to be relieved of duty it proved he was sane and he shouldn’t be relieved — air commanders debated whether to install mission quotas because crews typically didn’t survive more than six to 12 flights.

“The thing that makes it most difficult to maintain morale is to have no policy, leaving clearly in the eye of the combat crewman the belief that he must go on until he becomes a jibbering idiot, an admitted coward, or is killed,” Lt. Gen. Ira Clarence Eaker, commander of Army Air Forces in the United Kingdom and the Mediterranean, wrote in support of set rotations, according to the study. “We are all in one mind that the effectiveness of tactical units cannot be maintained under this condition.”

It was under these conditions that the Butler brothers flew missions. The sardonic sobriquets of the planes they flew on couldn’t have inspired confidence. B-24 Liberators were nicknamed “flying coffins” due to their narrow design, vulnerability to flak and inability to fly as high as the B-17. The Liberators were faster and could fly longer than B-17’s, but Doug Butler said the planes typically flew at about 25,000 feet. He said antiaircraft fire rose as high as 30,000 feet.

The often-inexperienced crews also had to face the German Luftwaffe. While some of the most experienced pilots had died by 1944, there were still many battle-hardened German pilots flying.

Doug Butler, who would fly 35 bombing missions, recalled how Luftwaffe pilots would try to fly underneath the B-24s and attack the bomb bays. Butler was trained to lead his targets, meaning firing where he expected them to be rather than where they were when he squeezed the trigger.

“When they did, they’d hang up there and stall at 2 o’clock or 10 o’clock [high] and when they did, I’d unload on them,” Butler said. “We had armor-piercing shells that just knocked those things to pieces.”

“Germany is not beaten yet,” Robert Butler wrote in a letter to his family. “Because every time we go on a raid we get shot at.”

The letter was received on Oct. 19, 1944, the day Butler was declared MIA, according to a Winchester Evening Star article about his status. An article a year later described his death. It occurred about 35 miles southwest of Maintz, Germany, the mission target. The city’s railroad and location near a river made it a transportation hub and an Allied target.

Robert Butler, 21, was one of nine members aboard “Pregnant Peggy” one of about 300 bombers flying in close formation, according to a German memorial about the deadly raid. Severe turbulence and propeller wash from two other planes caused the pilot of Butler’s plane to lose control. It crashed on top of “Bomber’s Moon” another B-24 that was also carrying nine men. Two men from each plane were able to parachute to safety with the remainder killed. The sortie was just the fifth mission for Robert Butler.

All of the Butler children are still alive and Doug Butler said they often speak of Robert Butler and wonder about the life he might have lived. Butler said he sometimes wonders why he survived and his brother didn’t. “That was war and it happened,” he said.

On Friday, Butler placed flowers on his brother’s grave at Mt. Hebron Cemetery in Winchester.