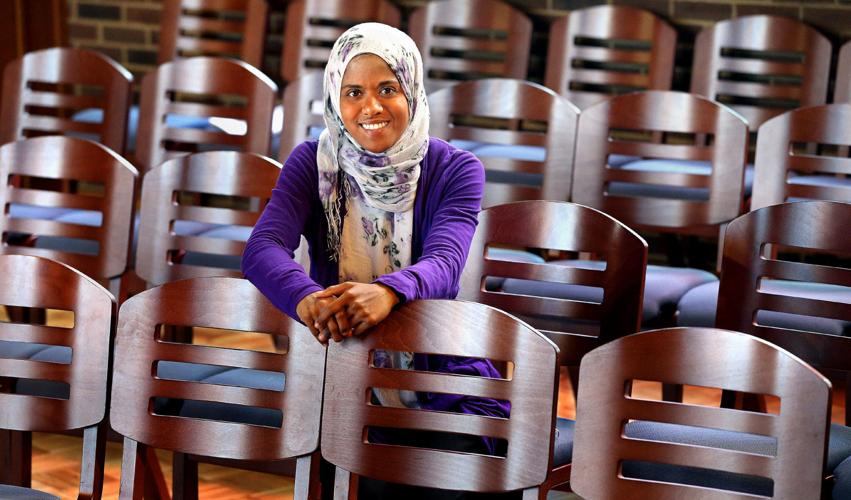 Hanaa Unus is Shenandoah University’s first Muslim community coordinator. She also has joined the university’s Office of Spiritual Life as a chaplain. She is one of three chaplains at S.U.

Hanaa Unus graduated in May from Hartford Seminary in Connecticut.

Hanaa Unus is Shenandoah University’s first Muslim community coordinator. She also has joined the university’s Office of Spiritual Life as a chaplain. She is one of three chaplains at S.U.

Hanaa Unus graduated in May from Hartford Seminary in Connecticut.

WINCHESTER — Hanaa Unus has joined Shenandoah University’s Office of Spiritual Life as a chaplain, making her the first clergy member in the university’s history who does not identify as Christian.

The 36-year-old, who recently moved to Winchester from Herndon, is also the university’s first Muslim community coordinator.

SU is one of six United Methodist Church-affiliated institutions of higher education in Virginia.

Chaplains at the university minister to people of all faiths. Unus, who is Muslim, graduated in May from Hartford Seminary in Connecticut.

With the addition of Unus, there are currently six employees in the Office of Spiritual Life, including two Christian clergy and three Christian laypeople.

To better serve the range of faiths practiced by students on campus, SU Dean of Spiritual Life Justin Allen said it was time to diversify the Office of Spiritual Life’s religious background.

“We’ve been affiliated with the church for almost 150 years, it’s the right time. All of our students are not Christian. Our students come from different faith backgrounds,” he said.

Last fall, approximately 1,030 of 3,817 students provided information on their religious affiliation. Of those responses, 16 students were in the category of Muslim or someone who practices Islam, or both, said Rebecca Layne, SU’s media relations coordinator.

Allen said he is open to hiring more religiously diverse staff in the Office of Spiritual Life in the future.

On top of interfaith work as a chaplain, Unus will be reaching out as a Muslim community coordinator to Muslim and non-Muslim students on and off campus to address their spiritual needs and create a safe space to practice their religion and discuss their concerns. She also will be reaching out to Muslim high school students about making SU their college choice.

She hopes to also educate non-Muslim students at SU about the faith and its culture.

In January, SU entered into affiliation with the Center for Islam in the Contemporary World, which is located on the university’s Leesburg education site. Allen said it’s likely Unus will be partnering with the center as well as with SU academic programs and the university’s Mosaic Center for Diversity.

Unus said she hopes to build a more strong and diverse community at SU.

“I think part of what makes our society, communities, our country and the world so beautiful is the diversity that we have,” Unus said. “I think it’s really important that we overcome that type of speech of just ‘us or them’ ... and understand that it’s a ‘we.’”

Unus wants to survey the campus community to better gauge students. A lot of her responsibilities as Muslim community coordinator will be about education and cultural competency, helping others understand the Muslim faith.

Unus, who went to George Mason University for her undergraduate degree, said the student body was very diverse and she didn’t face as many challenges as she might have on a less diverse campus. But she still felt the unique challenge of growing up Muslim post-9/11.

“We had our own sets of challenges and unfortunately I think as some of the rhetoric we’re hearing these days, a lot of that is coming back and students are having to deal with that,” Unus said.

Unus doesn’t think everyone has to agree on certain values and faith but feels there needs to be an understanding and respect for people’s differences.

For five years, Unus served as the education coordinator at the All Dulles Area Muslim Society Center, where she created programming that helped youth learn how to practice and identify as both Muslims and Americans. She said Muslim students often struggle to accept both identities. She hopes she can help Muslim students at SU realize it doesn’t have to be a choice between the two; they can embrace both.

Unus also worked with the International Interfaith Peace Corps in Herndon, where she organized international conferences that centered on empowering imams and religious leaders to combat violent extremism by holding conversations across religions. She’s also worked at the Islamic Society of North America and the Muslim Youth of North America, both based in Indiana.

Elected officials and candidates from the state and region offer their reactions to the U.S. Supreme Court's decision, in prepared statements and social media posts:

Clarke to consult with Loudoun about mountain highway matters

Here is the latest SEC sports news from The Associated Press