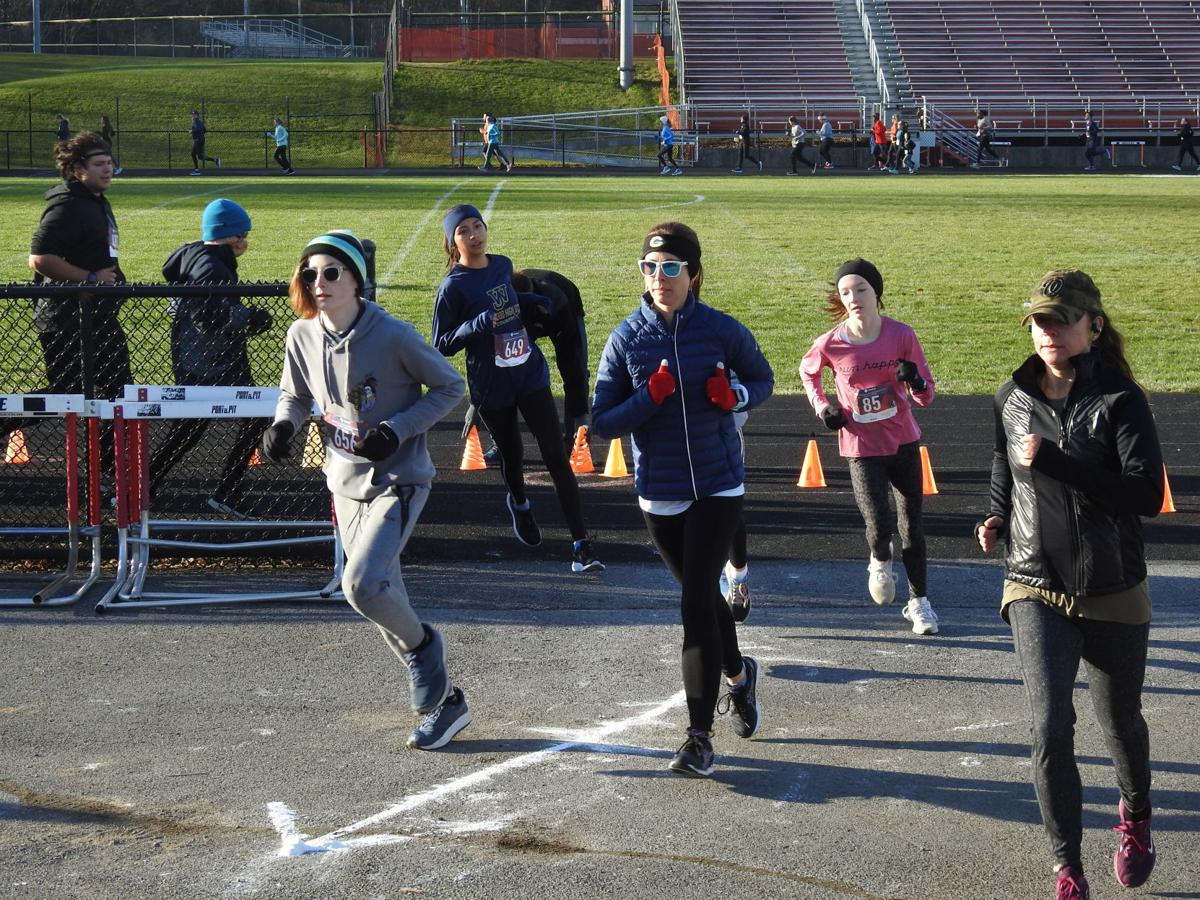 A few of the 600-plus participants in Frederick County Parks and Recreation's Thanksgiving 5K round the corner during the Thursday run. 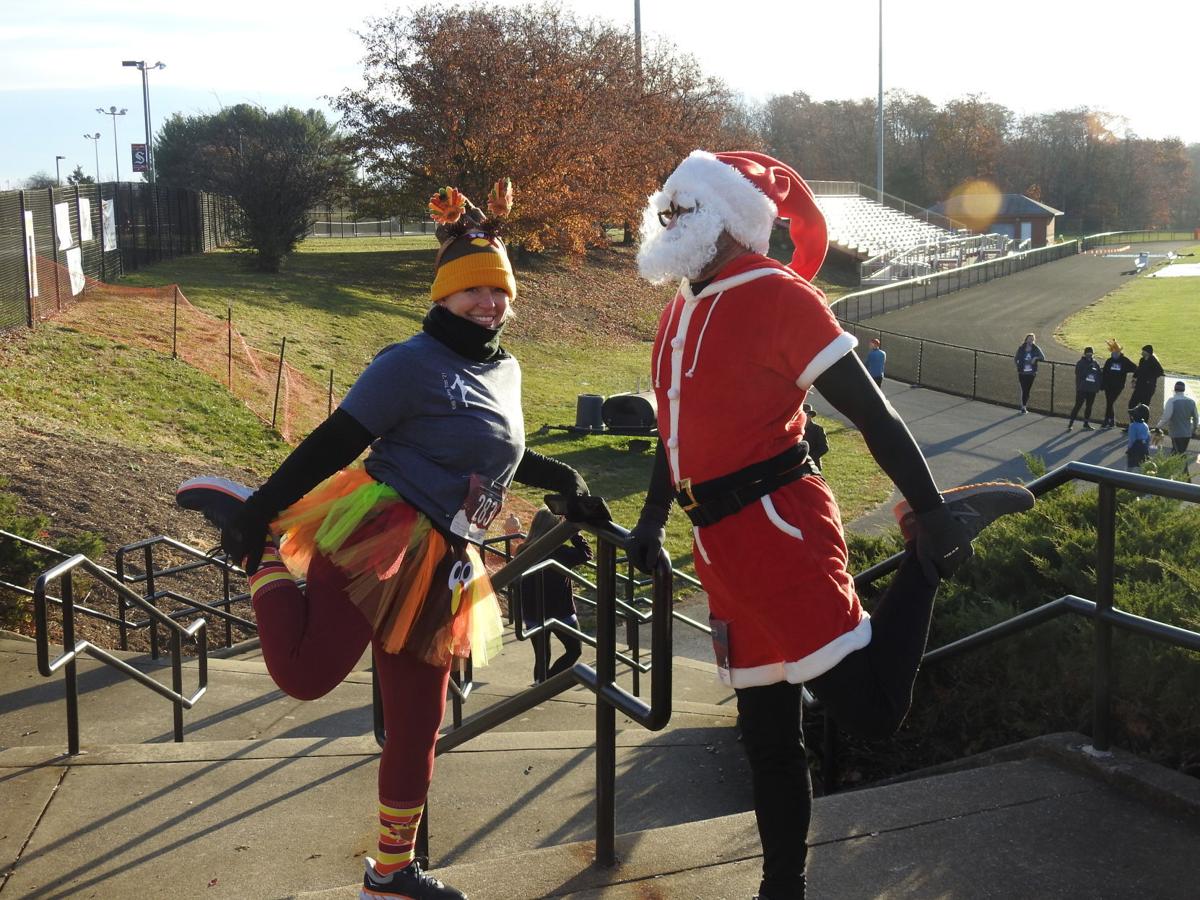 Jessica Arnold and Gage Wilson stretch while preparing for the Thanksgiving 5K. 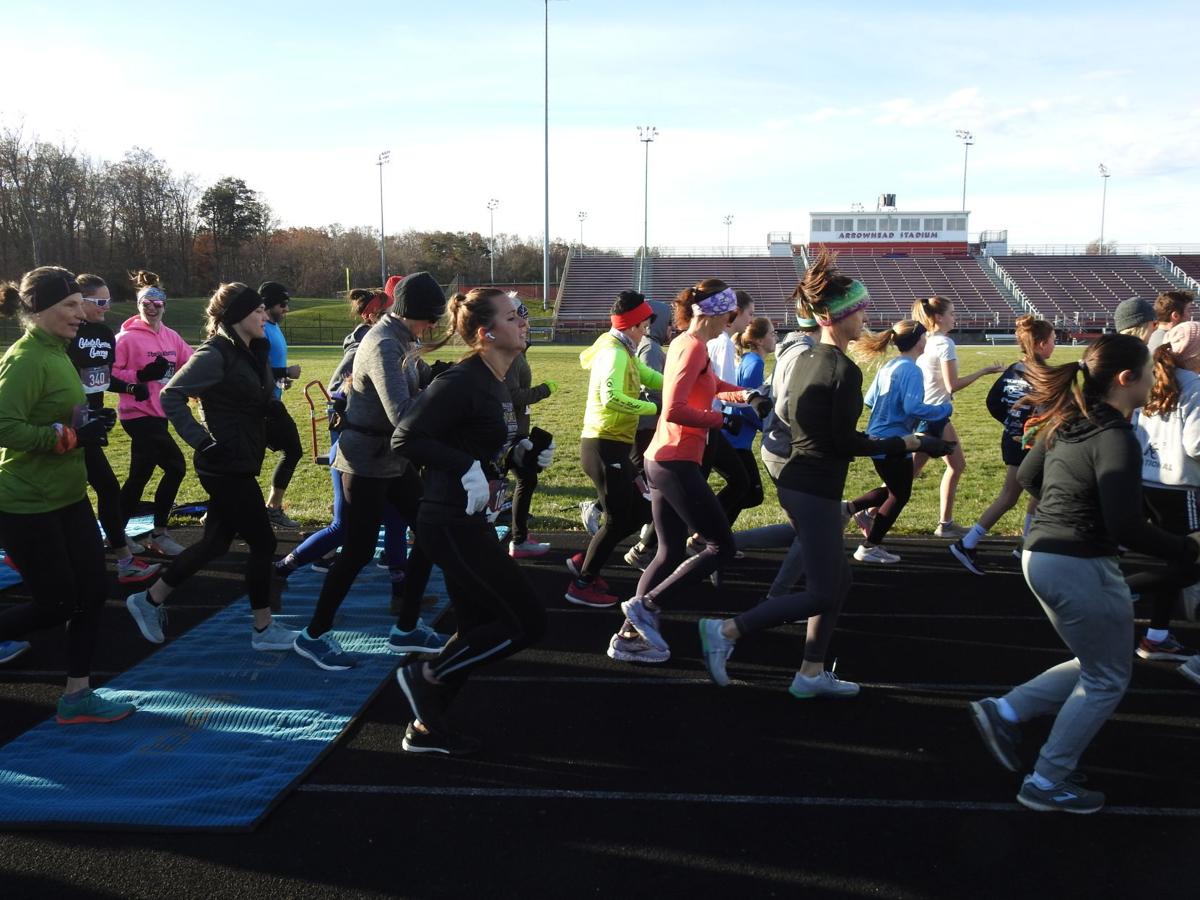 More than 630 people participated in Thursday's Thanksgiving 5K, which kicked off at Sherando High School.

A few of the 600-plus participants in Frederick County Parks and Recreation's Thanksgiving 5K round the corner during the Thursday run.

Jessica Arnold and Gage Wilson stretch while preparing for the Thanksgiving 5K.

More than 630 people participated in Thursday's Thanksgiving 5K, which kicked off at Sherando High School.

STEPHENS CITY — The COVID-19 pandemic did not thwart the Frederick County Parks and Recreation’s Thanksgiving 5K this year, as the 23rd annual race returned in full force on Thursday with more than 630 runners participating.

The 5K kicked off at 8:45 a.m. at Sherando High School at 185 S. Warrior Drive. Hundreds of runners raced through a course that included a track pavement and woodland trails of Sherando Park.

The first-place winner in the male category was 21-year-old Winchester resident Kevin Konyar, who finished the race in 16 minutes and 38.9 seconds. Konyar previously won the race in 2019.

In the female category, the winner was Jeannette Mathieu, 31, of San Francisco, California. She had a time of 18 minutes and 27.3 seconds. In second place was 17-year-old Emma Ahrens of Stephens City (19 minutes and 58.5 seconds), and in third place was 20-year-old Katie Borland of Winchester (20 minutes and 16.7 seconds).

Jessica Arnold and Gage Wilson, a local couple, came to the race dressed as a turkey and Santa, respectively. It was their first time attending.

“This is actually our first one together,” Arnold said. “I have done little five Ks everywhere, kind of you know, here and there. So I wanted us to have our little tradition to do it for Thanksgiving.”

Despite looking forward to the race, she said they did not plan to be among the fastest runners for this year.

“We’re definitely just trotting,” she said with a laugh. “I’m easing him in.”

However, 16-year-old Henry Horvath said he was optimistic about his chances in the race due to his recent success in cross country. He ultimately was the 7th fastest runner overall, finishing in 18 minutes and 35 seconds.

“I live in New York, and I just finished my cross country season,” Horvath said. “I know on Thanksgiving Day I kind of get stuffed with food and sometimes feel a little sleepy, so I thought what better way to end the season than with a 5K.”

Jeremy Sanders of Stephens City says he’s been running for 10 years and has participated in most of the Thanksgiving 5Ks since.

Sanders said he was recovering from a knee injury and simply hoped to “get a good workout in.” Instead, he managed to be one of the fastest runners in the race, placing 16th overall (both genders) with a finish time of 19 minutes and 36.8 seconds.

The Thanksgiving 5k has been held annually since 1998, and Parks and Rec Program Supervisor and event organizer Ashley Ferguson said the race has become “a tradition.”

This year’s race was a return to form. Because of COVID-19 pandemic restrictions, last year’s 5K took place over two days, with a maximum of 250 participants per day.

Ferguson said turnout for this year’s race was 637. While not as high as 2019’s record-breaking turnout of 770, she said the Parks and Recreation Department was happy with the numbers and “definitely” considered the event a major success.

“We are just happy to have so many people back after 2020. Because in 2020, the race looked so different. So to have a sense of normalcy again and to have the community support the race in such a big way, it was really awesome to see.”