You are the owner of this article.
Edit Article Add New Article
You have permission to edit this article.
Edit
Login
Home
News
Opinions
Sports
Obituaries
Life
Advertise With Us
Classifieds
Jobs
Events
Digital Replica
1 of 5 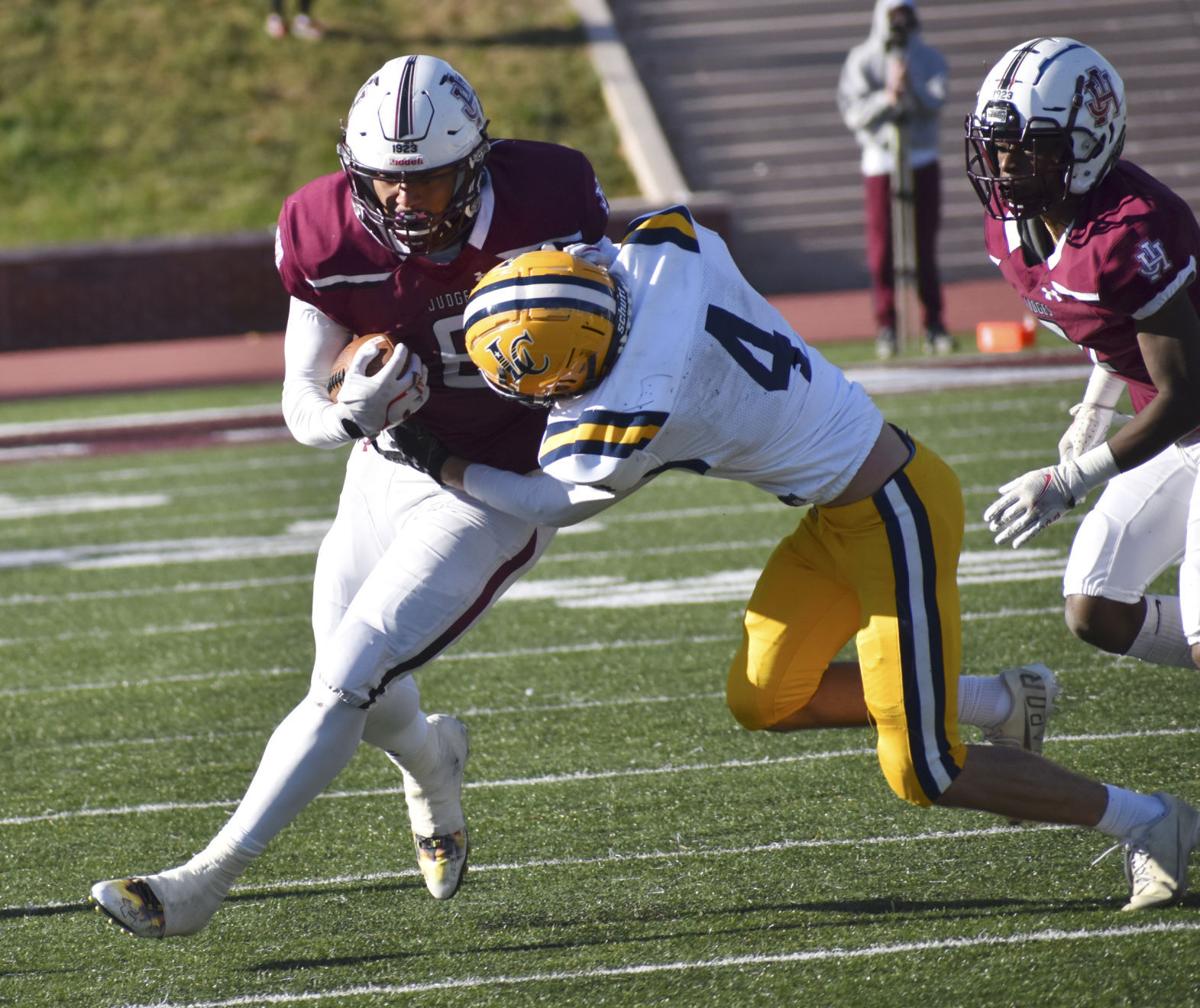 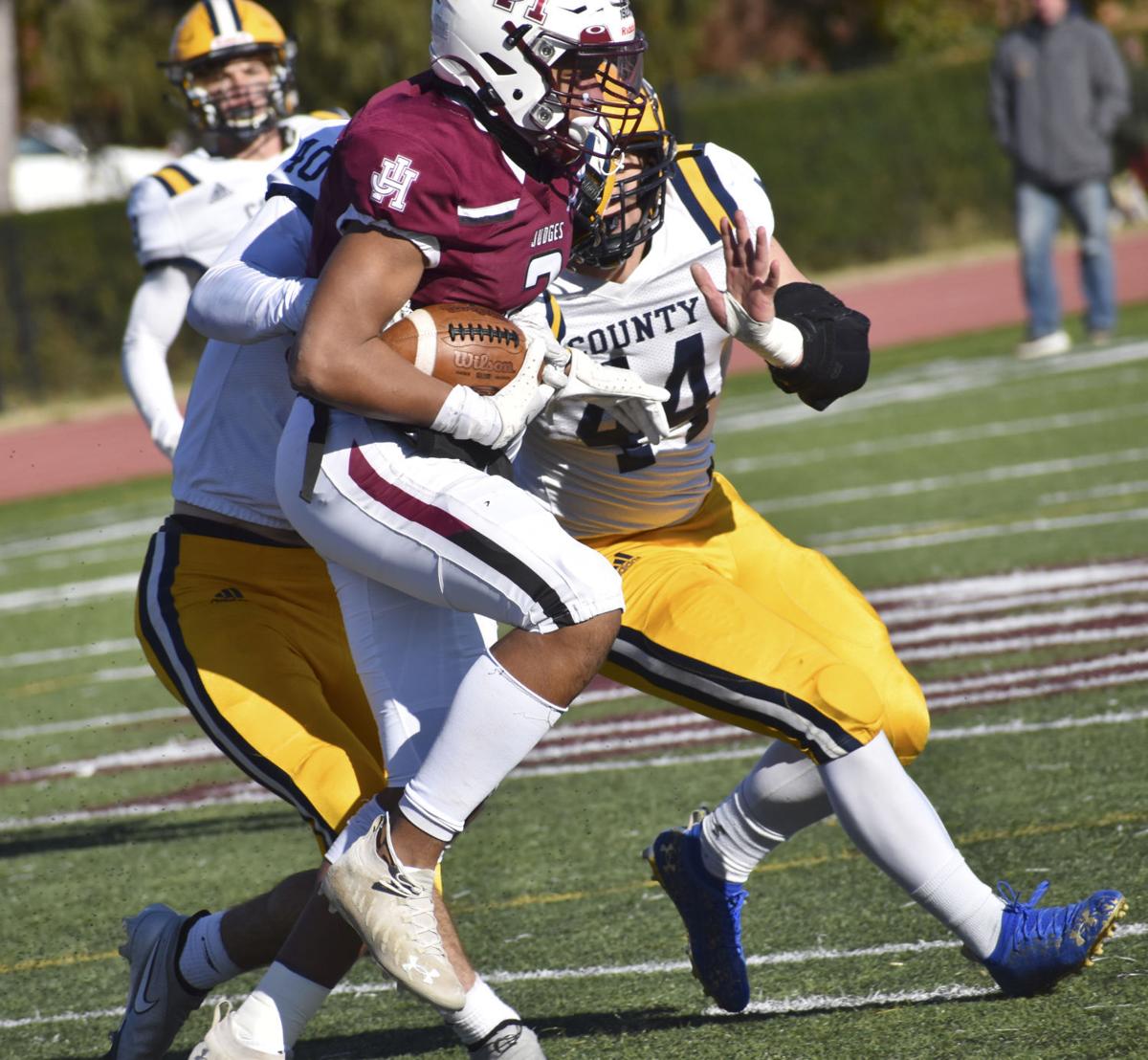 Handley's Emerson Fusco bulls for yardage as Loudoun County's Caleb Graham (44) and Jackson Snyder (40) try to make the stop during the second half of the Judges' 21-6 loss to the Captains on Saturday. 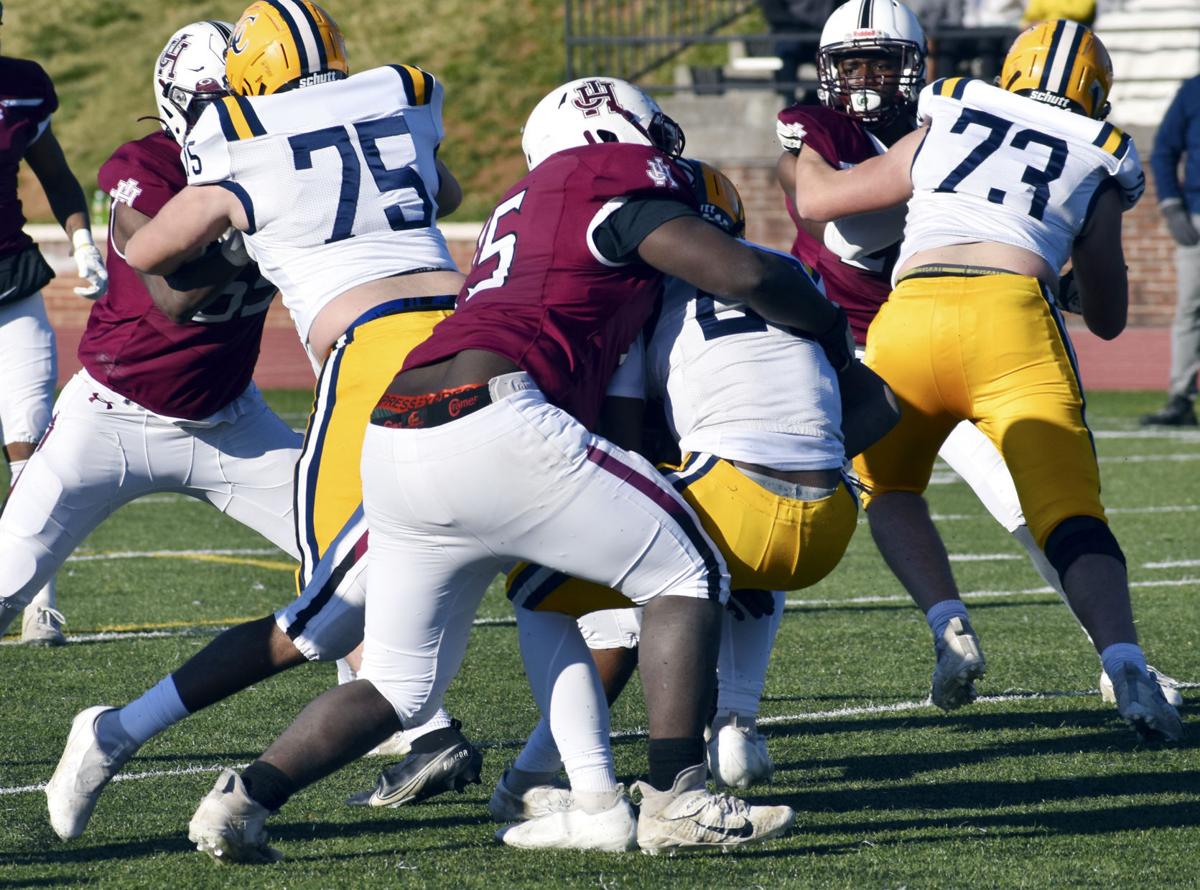 Handley's Rodd'ney Davenport swallows up Loudoun County running back Jason Murray for a loss during the Judges 21-6 playoff loss on Saturday. 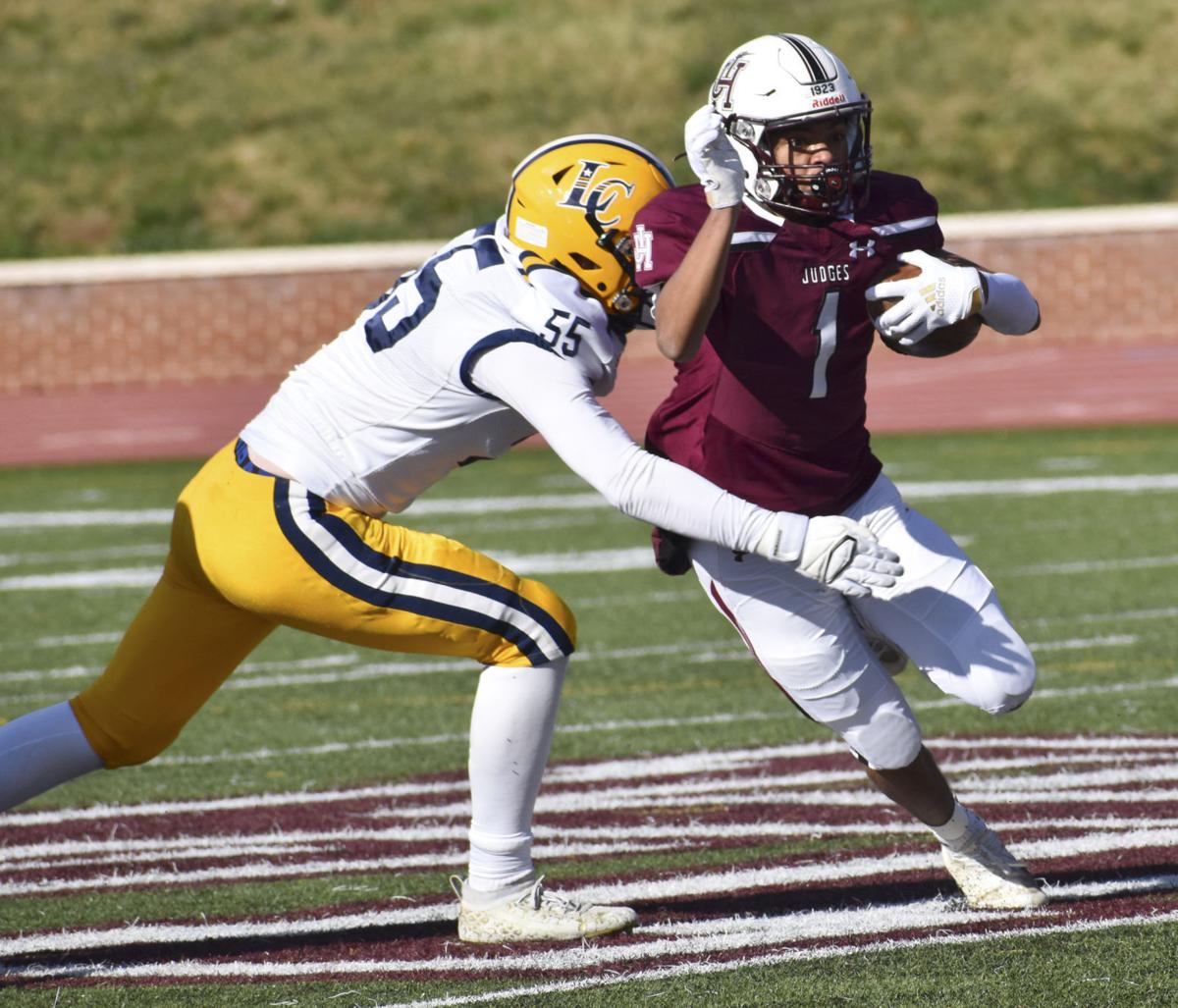 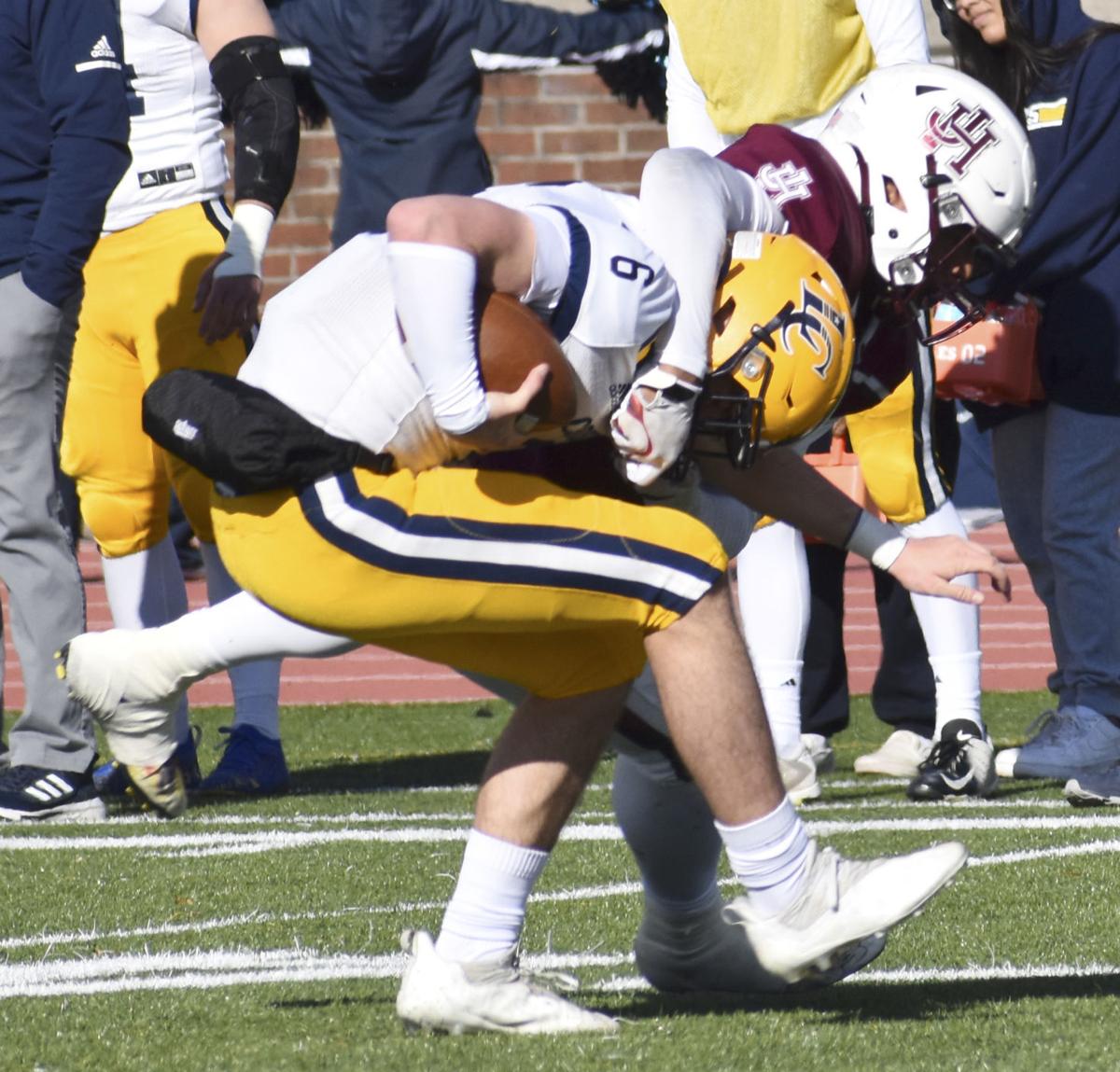 Handley's Emerson Fusco bulls for yardage as Loudoun County's Caleb Graham (44) and Jackson Snyder (40) try to make the stop during the second half of the Judges' 21-6 loss to the Captains on Saturday.

Handley's Rodd'ney Davenport swallows up Loudoun County running back Jason Murray for a loss during the Judges 21-6 playoff loss on Saturday.

WINCHESTER — The final score on the board at James R. Wilkins Stadium on Saturday read 21-6.

But in reality, it could have just read 4-0.

That’s how many turnovers Loudoun County produced against Handley as the Captains ended the Judges’ season in the quarterfinals of the Region 4C playoffs. Loudoun County (9-2) advances to play Dulles District champion Broad Run in the semifinals on Friday, while Handley finishes at 9-2.

Two devastating turnovers in the second half crushed the Judges’ chances of capturing their first playoff win since 2010 and ruined a 206-yard rushing effort by senior Stephen Daley. Loudoun County, getting a touchdown run from quarterback James Daughtrey on its opening drive, never trailed on the cool, blustery afternoon.

“You can’t turn the ball over four times against a great team like that and expect to have the outcome we wanted,” Handley coach Dan Jones said. “The score doesn’t indicate how hard the kids played today. It stings even more because the seniors are gone and they are a great group of kids.”

Handley was down 7-0 at the half, but got the ball to start the final two quarters. The Judges, behind the running of Daley and Emerson Fusco and with the help of a pass interference penalty, embarked on a 13-play drive starting at their 33. But on fourth-and-goal from the 2, quarterback Davion Butler and Daley could not get the ball exchanged properly and the Captains recovered the fumble, staving off Handley’s attempt to possibly tie the score.

“I won’t say that was the back-breaker, but if we could have gotten that, gotten in and had the momentum on our side, it definitely could have helped change the outcome,” Jones said.

“It was very tough,” Daley said of not scoring on that drive. “It’s on me as a senior. I can’t make mistakes, especially in a game like this. You have to move forward and go on to the next play and we did that the best we could.”

The Judges were able to force a punt from the Captains, but on Handley’s next possession disaster struck again. On the first play of the fourth quarter, Butler was sacked by Thomas Tyler and fumbled, giving Loudoun County the ball on the Handley 15. On the next play, Jason Murray (16 carries, 95 yards) bulled his way into the end zone for a 15-yard score to make it 14-0.

A fake punt that was unsuccessful gave the Captains another short field and Daughtrey capitalized, tossing a 22-yard TD pass to Jimmy Kibble, who appeared to shove down the Handley cornerback on the play, to make it 21-0 with 5:28 to go.

With one last offensive drive of his career, Daley finally helped the Judges score against the Captains. Daley carried five times for 70 yards and caught a screen pass for 17 yards. His final offensive play for the Judges was a five-yard TD run where he carried tacklers into the end zone.

“His attitude, his work ethic, his humbleness, all of that stuff, he’s just a class act all of the way around, just like all of our seniors to be honest with you,” Jones said of Daley, who had 31 carries in the game. “We used him until the tank was dry.”

Daley appreciated his chance for rushing touchdown No. 25 on the season. “It was very good,” he said. “Even though we did not get the ‘W,’ at least I got to score with my friends one more time before we called it a season.”

Loudoun County completed a sweep by the Dulles District of Northwestern District teams as Broad Run, Heritage and Tuscarora each won by more than three touchdowns on Friday.

“Their district is tough,” said Jones, who dropped to 0-3 in the regional playoffs. “Until we figure a way to beat somebody in that district, we’re not going to get very far.”

Loudoun County started the contest like it could be another romp. Daughtrey had three carries for 40 yards and a 26-yard completion to Joseph Fitzpatrick in a seven-play, 75-yard march. Daughtrey scored on a one-yard run.

“That’s kind of been our M.O. this year,” Jones said. “The first drive of a game, some teams have gotten the better of us, but the defense figures it out. We pretty much shut them out for the next 3½ quarters.”

Handley, too, got off to a good start. The Judges drove 43 yards to the Loudoun County 25, but Butler was picked off by Daughtrey to end the threat.

Kibble also had an interception after Handley moved into Loudoun County territory on its second drive. A high snap that led to a nine-yard loss also stalled a Judges’ drive that got to the Captains’ 35 in the second quarter.

“It seemed like we could get the ball down in the red zone and then we would have a little mistake,” Daley said. “It gave them the momentum. On defense, we tried our best. We held them to seven most of the game. Especially after that first drive when they just drove it right down, we responded well.”

Daley and Rodd’ney Davenport led the Judges’ defense. Fusco (7 carries, 35 yards) and Davenport each bounced back from injuries in the first half and finished out the game. Loudoun County’s defense was led by linebacker Caleb Graham, who had multiple tackles for losses.

“It was a tough one,” an emotional Davenport said after the game. “I’m going to miss the seniors.”

The Judges have 18 seniors on the roster.

“Man, four years go by quick,” said Daley, who pointed out the Judges improvement from his freshman season to three straight playoff berths. “… We changed the culture. The year before I got here, Handley wasn’t known for winning. To make it three years in a row, we’ve set it up for the younger kids.”

“They’ve brought us back to where we need to be,” Jones said of the senior class. “We just have got to continue and grow to get better to make that next step. They took us as far as they could. Now our younger underclassmen have to step up.”