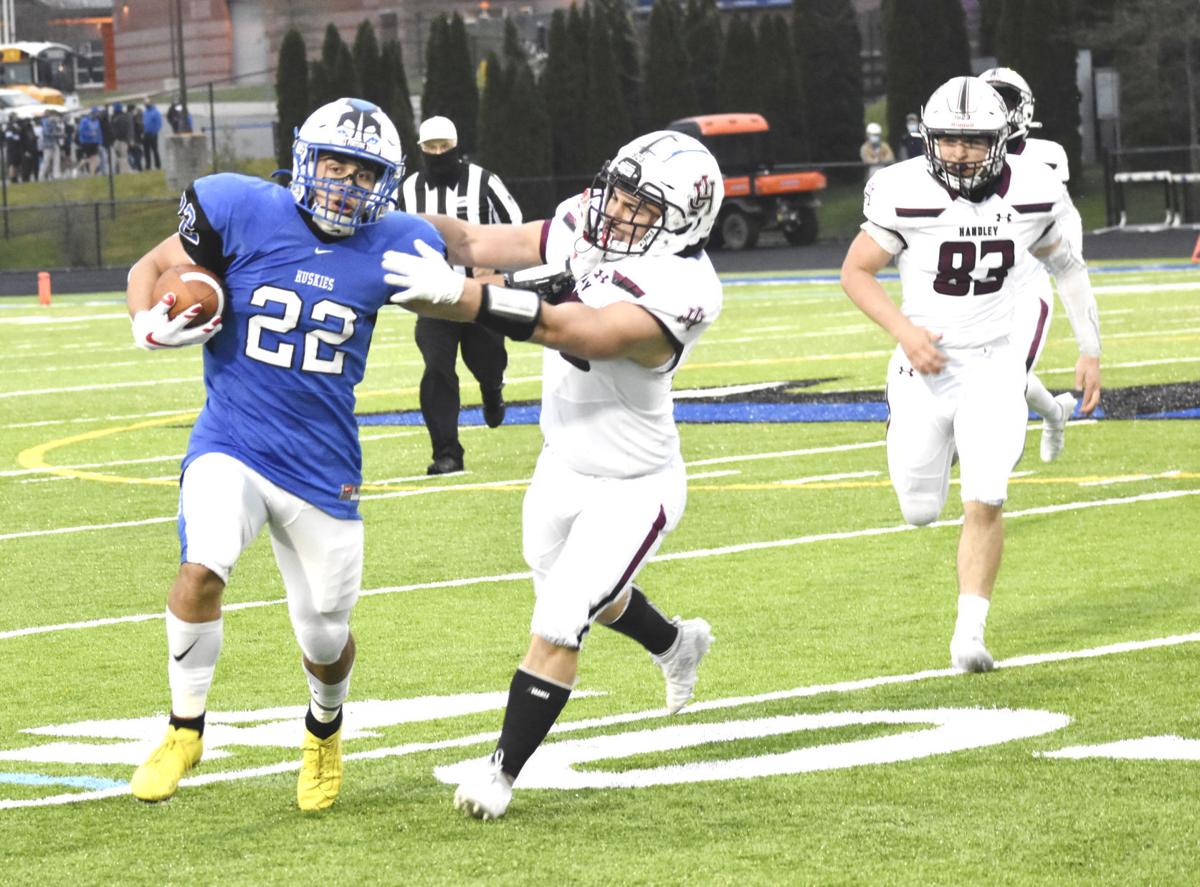 Tuscarora’s Bryce Duke was a handful for Leland Walkling (25), Joshua Corsnitz (83) and the rest of the Handley football team in Friday’s Region 4C semifinal at Fortune Field in Leesburg. Duke rushed for 217 yards and three touchdowns as the Huskies won 56-0. 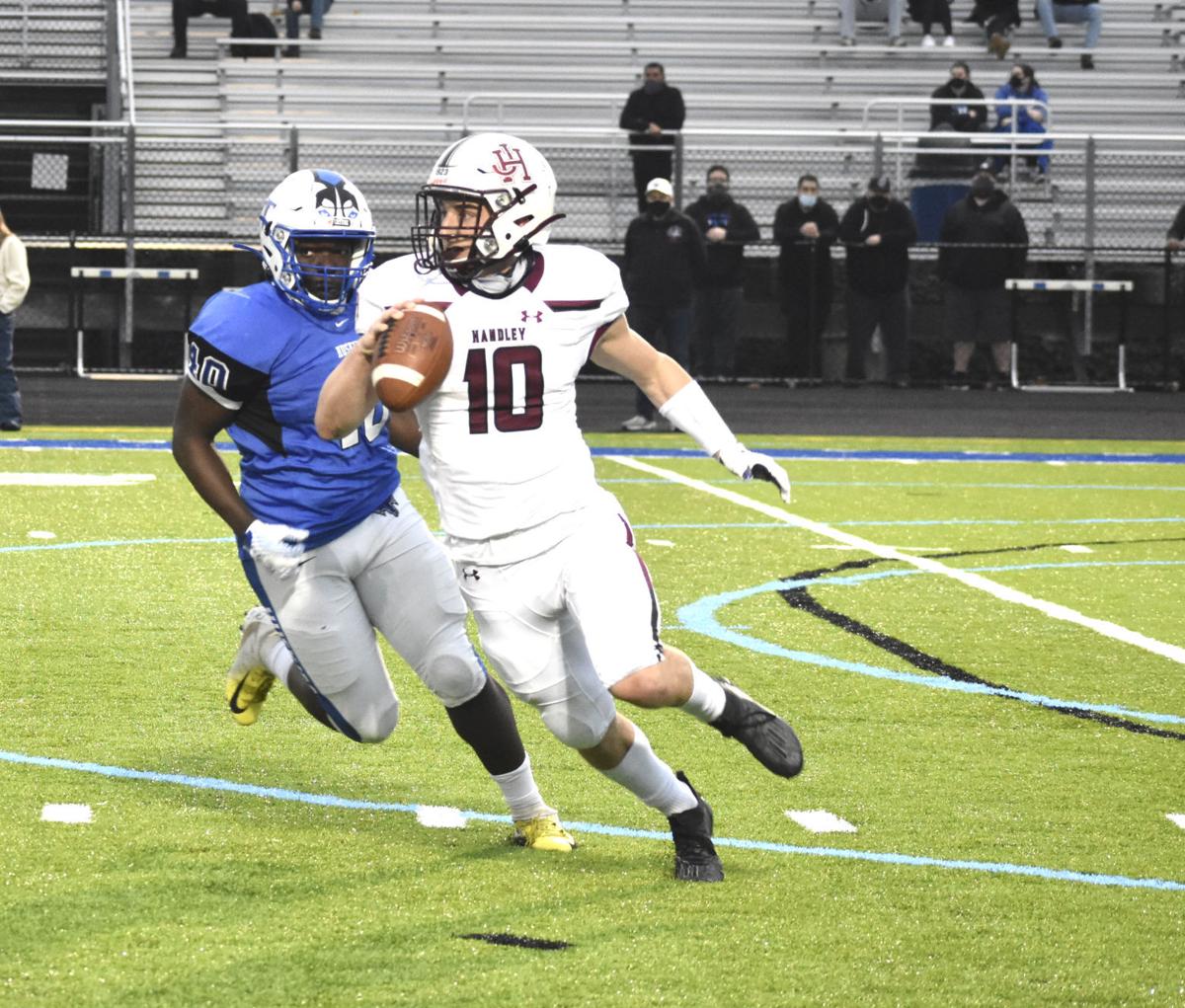 Tuscarora's Prince Ezeonyim (left) chases Handley quarterback Aidan Haines in the first quarter of the Huskies' 56-0 win in Friday's Region 4C semifinal in Leesburg. The Judges were held to 156 yards.

Tuscarora’s Bryce Duke was a handful for Leland Walkling (25), Joshua Corsnitz (83) and the rest of the Handley football team in Friday’s Region 4C semifinal at Fortune Field in Leesburg. Duke rushed for 217 yards and three touchdowns as the Huskies won 56-0.

Tuscarora's Prince Ezeonyim (left) chases Handley quarterback Aidan Haines in the first quarter of the Huskies' 56-0 win in Friday's Region 4C semifinal in Leesburg. The Judges were held to 156 yards.

LEESBURG — On the game’s first play Friday night, the Tuscarora football team had to move backward as a result of a holding call on its kickoff return.

From then on, it was full steam ahead for the 2019 Class 4 state finalists.

Junior running back Bryce Duke rushed for 24 yards on the Huskies’ first play from scrimmage to set the wheels in motion for a 56-0 win over Handley in the Region 4C semifinals at Fortune Field. It was Handley’s worst loss since losing to Sherando by the same score in 2016.

Tuscarora (6-0) scored touchdowns on each of its first five possessions. Its sixth possession ended with junior quarterback Sonny Mannino taking a knee at the Huskies’ 23 on the final play of the first half, wrapping up an opening 24 minutes in which the Huskies outgained Handley 336-72. The Judges (3-3) had only two rushing yards on 10 attempts in the first half.

The Judges had 21 rushing yards on 18 attempts. Tuscarora also had three interceptions of senior quarterback Chris Milotte (9 of 21 for 96 yards), who twice replaced starting quarterback Aidan Haines (5 of 11 for 39 yards).

“They were exactly what we thought they were,” said Handley coach Dan Jones of the Huskies. “They execute well. They do everything well.

Haines, who also plays safety for the Judges, doesn’t think he’s ever seen anything quite like Tuscarora.

“Their speed,” said Haines when asked what stood out the most about the Huskies. “Speed kills, and they have a ton of it. They’re probably the fastest team I’ve ever played in my life.”

Tuscarora certainly got off to a fast start on both sides of the ball.

Ten plays after Duke bounced his opening carry toward the left sideline to pick up those 24 yards, he walked in up the middle on a two-yard run to complete an 11-play, 81-yard drive. Duke had eight carries and 58 yards rushing on the drive.

“Bryce is special,” Tuscarora head coach Brandon Wheelbarger said. “His work ethic is second to none, and I think you’re just seeing him kind of get warmed up because of the work he puts in off the field.”

The first of eight Wilmer Salmerton extra points made it 7-0 with 7:33 left in the first quarter.

The Huskies’ defense then made a strong opening statement of its own, forcing a three-and-out in which Haines threw two incompletions and running back Dayvon Newman (26 total yards, seven carries for 12 yards) had a two-yard run.

Handley gave itself two excellent chances to make a stop on Tuscarora’s second drive. But the Judges — who jumped offsides on a third-and-2 play from their own 48 to help extend Tuscarora’s first drive — were flagged for offsides again on fourth-and-5 from the Handley 47.

Judges junior defensive end Stephen Daley recorded a 12-yard sack on the ensuing play, and two plays later Tuscarora faced a third-and-22. But Mannino connected with a wide-open Zach Drummond (three catches, 56 yards, one TD) on a deep pass over the middle of the field for a 37-yard gain.

Two plays after that, Mannino connected with Christian Camacho (five catches for 58 yards, one-yard rush TD) on a 11-yard slant for a TD to make it 14-0 with 3:20 to go in the first quarter.

Handley needed to execute almost perfectly to have any chance of beating the Huskies on Friday night. Giving them first downs with offsides calls and allowing them to convert a third-and-22 so smoothly definitely didn’t help the Judges’ cause.

“We knew coming into the game we couldn’t make many mistakes,” Daley said.

Though Daley had that sack, Tuscarora didn’t give the player with scholarship offers from schools like Virginia Tech, Virginia and Liberty many chances to make an impact. Most of Tuscarora’s plays were directed to wherever Daley wasn’t.

“It’s hard not to watch scout film and not see that kid on both sides of the ball,” Wheelbarger said. “He’s one of those kids that we [identified] to make sure we knew where he was, and what we were doing around him.”

Jones said the Judges tried to move Daley around to give him a better chance to make plays.

“Their offense is set up to [run-pass option] and do things,” Jones said. “They’re very good at what they do. They can pre-snap read things, and their quarterback puts them in a great situation.”

After another three-and-out and a 40-yard touchdown run by Duke to make it 21-0, Jones made a quarterback change in hopes of putting his team in some better situations.

Milotte nearly put the Judges on the board. High-flying basketball player Chaz Lattimore (four catches for 83 yards) made a leaping 26-yard reception over a defender to put the Judges at the Tuscarora 35. Three plays later, Jayden Vardaro jumped to try and catch a fourth-and-2 pass over the middle, but he couldn’t bring it in and Josh Bendix dove to catch the deflection for the first of his two interceptions.

Two possessions later, Jones turned back to Haines, who guided the Judges on a 46-yard drive to the Huskies’ 25. But after being flushed out of the pocket to the left, Haines’ fourth-and-12 pass to Joshua Slack came up short near the goal line with 15 seconds left in the half and Tuscarora up 35-0.

“We just tried to change things and find that spark,” said Jones, who turned to Milotte for good on the second possession of the second half.

There just wasn’t one to be found against Tuscarora.

“They all play to the whistle on offense and they block until the whistle blows,” said Daley of Tuscarora. “They don’t many mistakes and just keep on going. On defense, they’re very good at gang tackling. They all rally to the ball.”

Handley’s frustration was noticeable at times during Friday’s game, and understandably so.

But the Judges had plenty to feel good about this season, as they won three close and hard-fought games with Liberty, Fauquier and Culpeper County to earn their second straight Region 4C playoff berth.

“We’re very lucky to have a season,” Daley said. “I’m glad we got to play and we made it this far. Some people didn’t expect us to make it this far, because we lost a lot of big playmakers last year. We really kind of proved some people wrong.”

Haines transferred from Millbrook this year, and he was glad he got to experience the playoffs with the Judges. The Frederick County teams started too late to compete in the Virginia High School League postseason.

“I miss my guys at Millbrook, but I feel like this was the right move for me,” Haines said. “I enjoyed this season a lot with these guys.”

“[This season] meant a lot to me, man,” Vardaro said. “[I’ve known] these guys basically all my life. This team is like a brotherhood, and I’m going to miss them.”

Haines and Vardaro are two of 20 Judges seniors.

“I’m proud of the seniors,” said Jones of a group that took Handley to the playoffs for the second straight year after the Judges had failed to make them five years in a row. “We were beat by two very good teams, one of them (Kettle Run) twice.

“I’m proud of everybody going through this COVID thing, and where these guys got us. They took us to another playoff game, and we just have to figure out how to win one.”

Tuscarora will host Broad Run in this week’s region final. The Spartans beat Kettle Run 53-28 in Friday’s other semifinal game.