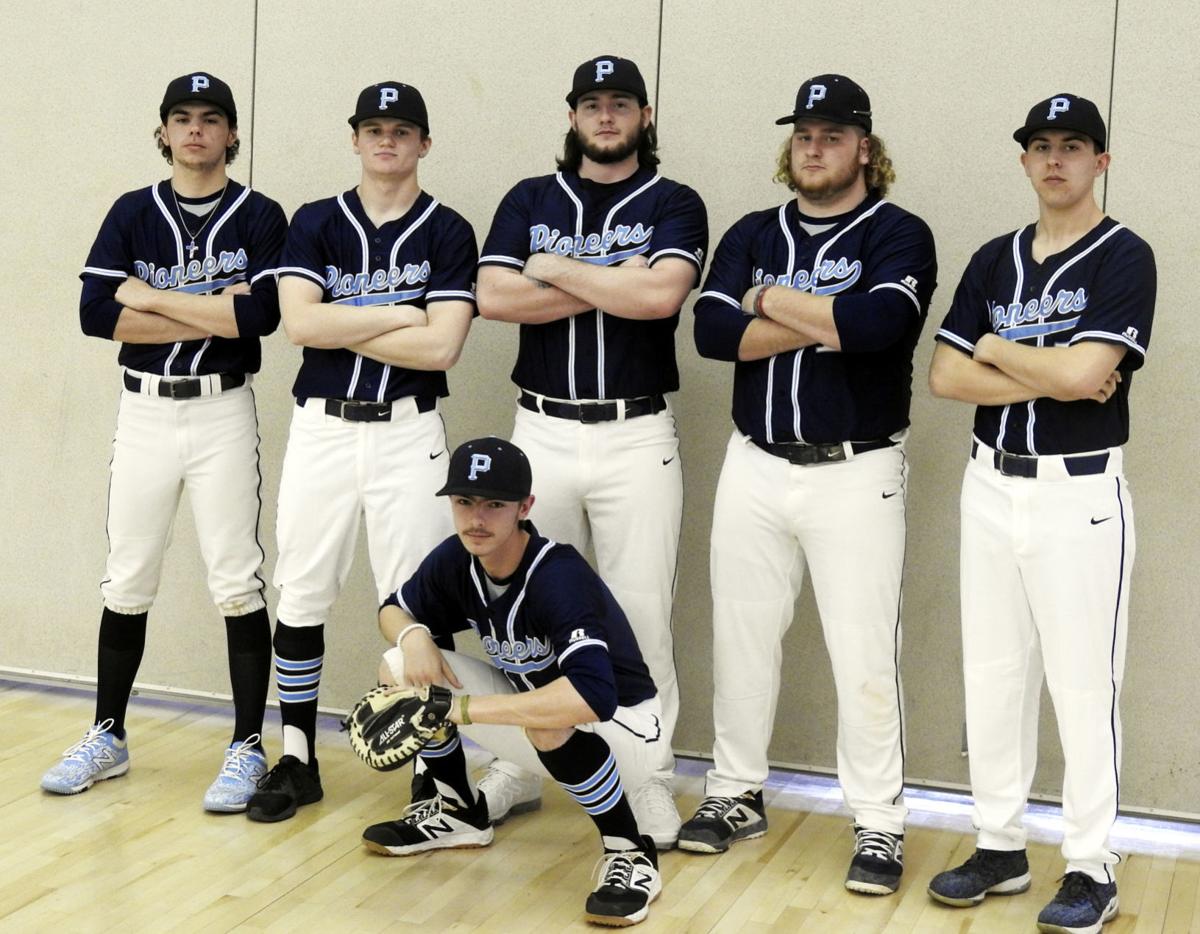 Millbrook baseball players from left: Timothy Hughes, Trevor Wright, Michael Robertson, Tyler Duckstein, Ronald Hileman and Robert Hummer (bottom), pose for a photo by a teammate during the school’s annual picture day on Friday at Casey Gymnasium. The Pioneers won’t be able to play or practice for the next two weeks because of coronavirus concerns. 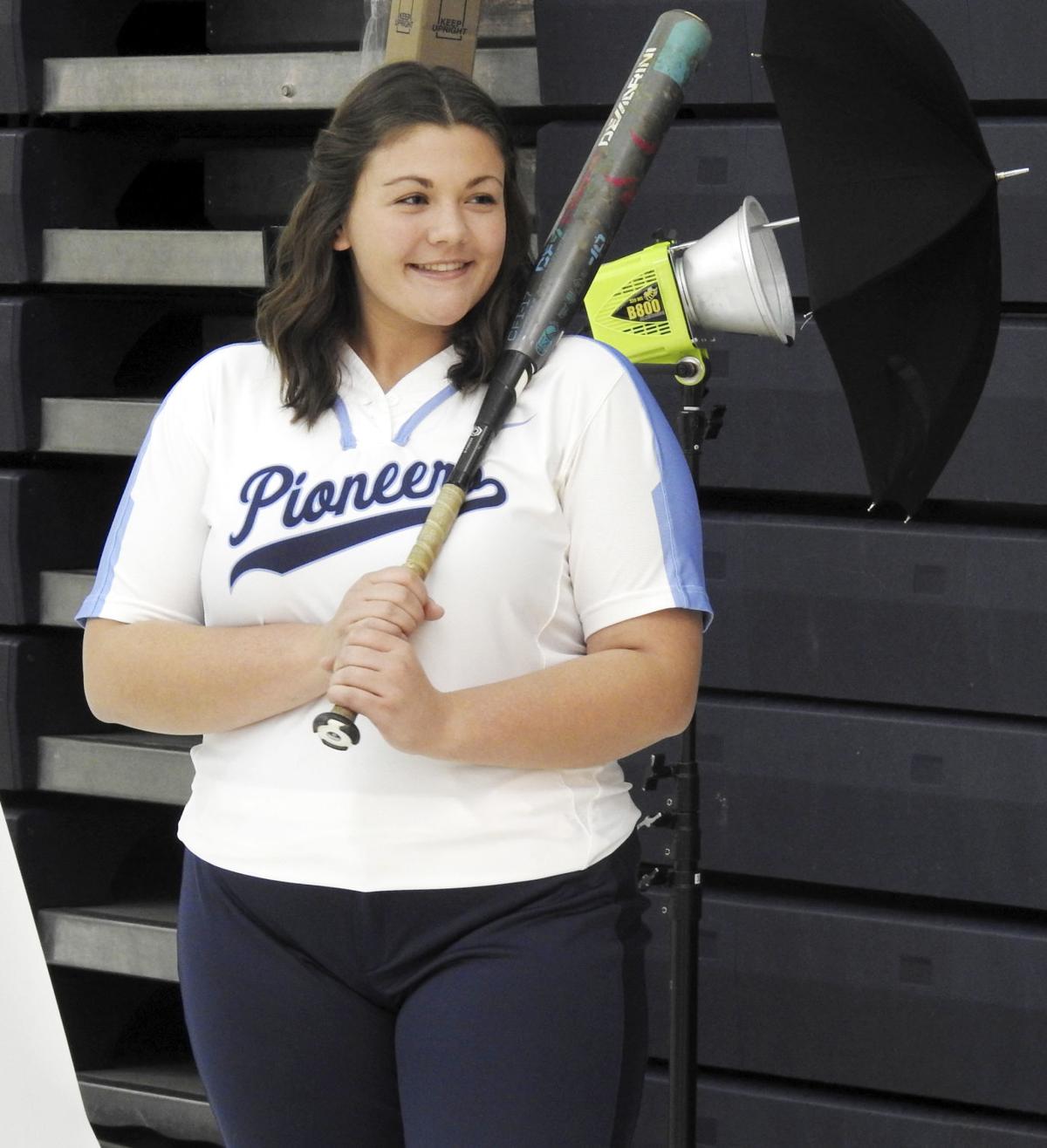 Millbrook softball player Emma Badnek poses for a photo during the school’s annual spring picture day on Friday in Casey Gymnasium. Badnek and her teammates will not be able to play or practice over the next two weeks because of coronavirus concerns.

Millbrook baseball players from left: Timothy Hughes, Trevor Wright, Michael Robertson, Tyler Duckstein, Ronald Hileman and Robert Hummer (bottom), pose for a photo by a teammate during the school’s annual picture day on Friday at Casey Gymnasium. The Pioneers won’t be able to play or practice for the next two weeks because of coronavirus concerns.

Millbrook softball player Emma Badnek poses for a photo during the school’s annual spring picture day on Friday in Casey Gymnasium. Badnek and her teammates will not be able to play or practice over the next two weeks because of coronavirus concerns.

Due to concerns over coranavirus (COVID-19), the Virginia High School League has delayed the start of the spring competition season until March 30.

In Friday’s news release, the VHSL stated its Crisis Management Committee would meet on March 25 to evaluate how to best go forward with spring sports. Currently, the VHSL is not pushing back the end of spring sports season — the outdoor track championships are still scheduled for June 5 and 6 and the Spring Jubilees for the other sports are slated for June 11-13.

The VHSL is leaving practice scheduling up to the schools prior to March 30. But on Friday, each of the three local school divisions — which include the high schools of Clarke County, Handley, James Wood, Millbrook and Sherando — decided to cancel athletic activities immediately and not resume practices until March 28 at the earliest.

Gov. Ralph Northam has ordered all schools in the state to be closed through March 27.

Numerous high school, collegiate and professional leagues have either canceled or suspended play in recent days. The VHSL’s first action was canceling the last two and a half days of the state basketball tournament, which was scheduled to conclude today.

James Wood coordinator of student activities Craig Woshner believes the VHSL made the right decision to go through with the suspension of spring competition.

“I believe it was smart on the VHSL’s part, just like with some of the pro or college leagues, to put a hold on the season and reevaluate as we go on,” said Woshner, who wished that the NCAA had opted for a reevaluation period for spring championship events. “We’ll just have to see how things are going [around March 30]. There’s not a whole lot you can do but roll with it and do what you can.

“The hope is that we can salvage the season as much as possible and give our kids an opportunity to play, but do so when it’s safe.”

As of right now, local schools are taking every precaution to keep their athletes safe. Woshner said that not only will all FCPS athletic facilities be closed to students, but also the general public. Millbrook coordinator of student activities Scott Mankins said athletes should not participate in informal practices. Both Handley and Clarke County have closed their athletic facilities.

“Once everything happened with the NBA [suspending play on Wednesday], I think that was the beginning of the snowball,” Clarke County director of athletics Casey Childs said. “Then with everything the VHSL did with the state basketball tournament at the Siegel Center, this became really a no-brainer. You name it, pretty much every single sport in America is shut down right now. This is what’s best for everybody.”

It might be best, but naturally, people aren’t happy about it.

“The seniors, they don’t know how much time they’re to have,” said Childs, whose son Colby is a senior on the baseball team. “[Colby] is hammering away at me [with questions], but I don’t have an answer to give him. I’ve told him that. We just have to stay the course and be patient.”

Millbrook had its picture day on Friday, and a couple of their seniors expressed their dismay.

“It’s upsetting because our season starts later and it’s senior year,” Millbrook shortstop and pitcher Sophie Pell said. “So I just hope we can get a lot of games in because it’s our last season together.”

“It’s definitely disappointing,” Millbrook pitcher and third baseman Michael Robertson said. “I just came off of basketball, a good season. Coming into baseball, I was prepared to get on the field and get work in.

“With everything that is going on now, it’s definitely scary not knowing what is going to happen. Hopefully everything goes by quick and we can get back on the field and play ball. With senior year, I’m definitely ready for the next level, but I want to finish strong.”

Robertson said he’s hoping to take the field for the Pioneers again, but he acknowledged that there’s a fear that it might not happen. It’s a feeling that’s shared around the area.

A recipient of a heart transplant a decade ago, Handley track & field coach Mike McKiernan has a sensitive immune system, and understands precautions have to be taken with something like COVID-19.

But on Friday at Handley, he ran into a lot of heartache.

“I’m very disappointed we have to stop the track season for a couple of weeks,” McKiernan said. “I really enjoy track & field, and I’m going to miss it. Just because of what’s happened at the collegiate level, I’m concerned that it might be over.

“I feel for the athletes. A number of them came to me today and told me they were going to miss it. Even though it’s hard work, they still enjoy it.”

For Sherando softball coach Clarence Smith, the thought of not returning to the diamond is hard to take for him and his players. The last portion of the school day on Friday consisted of players bombarding with him questions about their future.

“We spend a lot of time preparing for the season,” Smith said. “We have a lot of personal goals as well as team goals. Now suddenly everything goes on hold, and there’s a threat there may be no season at all. It’s very discouraging.

“You’re seeing all these major sports organizations cancel and postpone events. It’s hard for me to not reckon with the reality [of a possible season cancellation]. I’ve been following the coronavirus news, and they’re looking at early May as a time period for when this starts to subside. Applying that to our season [Sherando’s current regular-season finale is May 14], it’s pretty tough.”

Another question is what type of shape these teams will be without two weeks of coaching and having to jump right back into game competition.

Millbrook baseball coach Brian Burke said the layoff could be a concern.

“I think the biggest challenge will be on the pitching side of things because you’ve worked them up to a certain level, a number of pitches, and then you’re trying to expand on that,” Burke said. “With a layoff, unless they’re out there doing something on their own, it is a big setback.

For track, losing even just two weeks of conditioning could be a problem. Woshner noted that his sophomore son Nathaniel — a member of the Colonels track team — went on a seven-mile run on Friday. Nathaniel is one of the area’s best distance runners, though, and not everyone might have that self-discipline.

“Even if the athletes work on their own — which I’m sure some of them will — it’s still not the same as practice,” McKiernan said. “It’s just not the same quality and intensity as when you’ve got coaches and you’ve got a definite plan.”

Millbrook softball coach Rich Pell did point out that lengthy delays aren’t uncommon for spring athletes at this time of year, though.

“I think that’s something spring coaches are used to with the weather and being indoors all of the time all of the time because of the wetness,” he said. “Everybody is in the same boat so I don’t think it’s going to be that big a deal.”

If spring sports do start again, athletic directors from across the state will have their hands full trying to figure out what to do with rescheduling.

Mankins said any non-district events for Millbrook originally scheduled through March 27 will not be rescheduled. The only thing that Sherando has ruled out is making up a baseball doubleheader with Jefferson of West Virginia on March 21. (West Virginia has announced that all extracurricular activities are canceled through at least April 10.)

James Wood and Clarke County don’t have any specific makeup plans yet (Clarke’s baseball team is only losing two games in that time frame, but the four-game trip in Myrtle Beach, S.C.., on April 6-9 has been cancelled.) Handley director of student activities Reed Prosser could be not reached for comment.

“I think we’ll do our best to make up district games,” Childs said. “The non-district games, we’re going to have manage it and see what might work. [All the athletic directors] we also have to worry about getting officials and transportation issues. It’s going to be sticky, but our job is to do what’s best for our kids and our programs.”

Woshner said he thinks they’ll be able to make things work with officials to squeeze in games once they know how much time they have to work with.

“We’ve dealt with a lot of issues over the years, whether it was 9/11, the D.C. sniper, or major snowstorms where we’ve had to cancel activities for more than a week at a time,” Woshner said. “We’e always bounced back and been able to get the kids the opportunity to play.

“This is a unique situation that we’ve never dealt with before that’s so rapidly changing. But I don’t think there’s going to be any difficulty with securing refs or event workers or anything along those lines. Those people too are used to rolling with changes when they happen.”

Smith said it doesn’t matter to him how much practice time he gets this season. He’d love for his players to compete in as many games as possible.

“I would take weeks with four or five games a week rather than punting on the season,” Smith said. “I’m fine with doubleheaders. I just want the opportunity to get on the field and compete.

“This senior class that I have who is so accomplished and won so many awards and accolades, it’d be nice if they had that opportunity to put that cherry on top of a nice career.”

— Walt Moody contributed to this story.