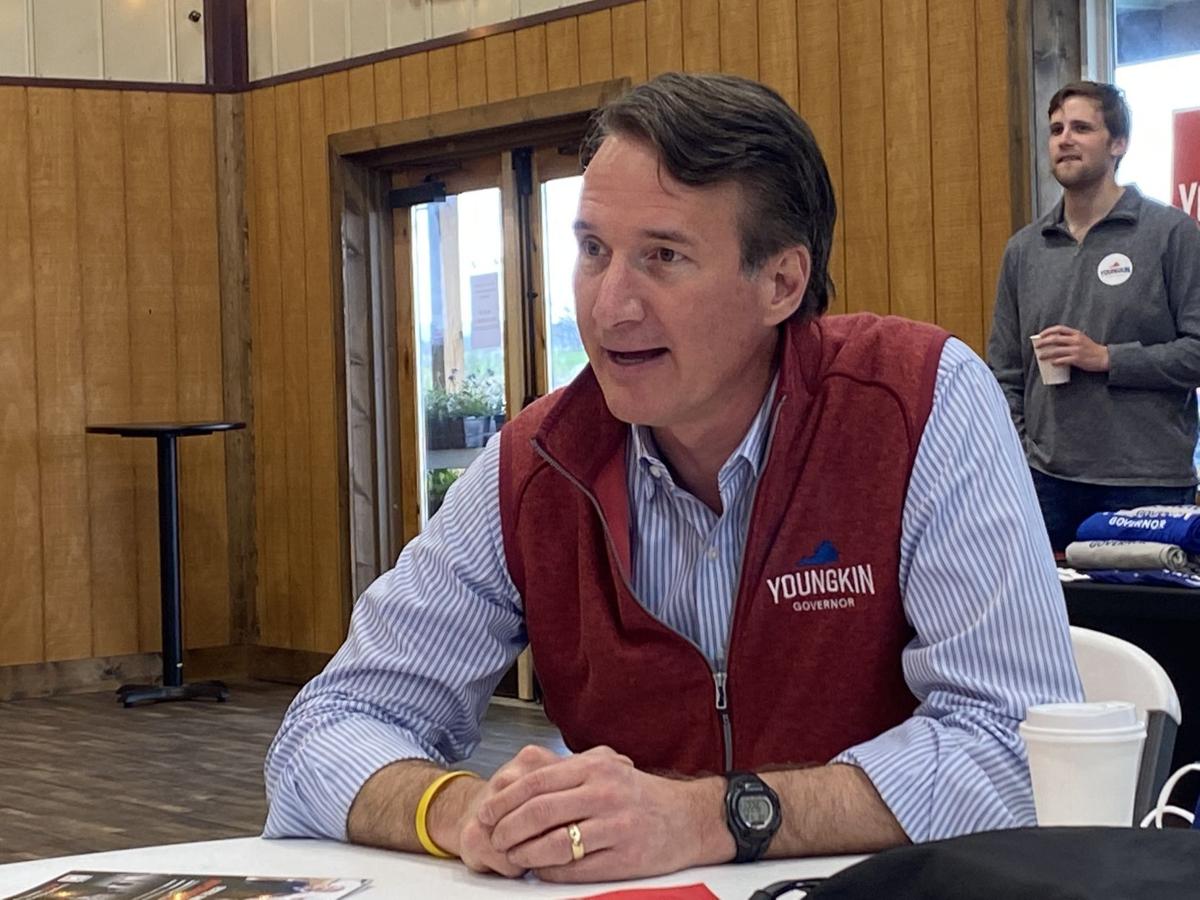 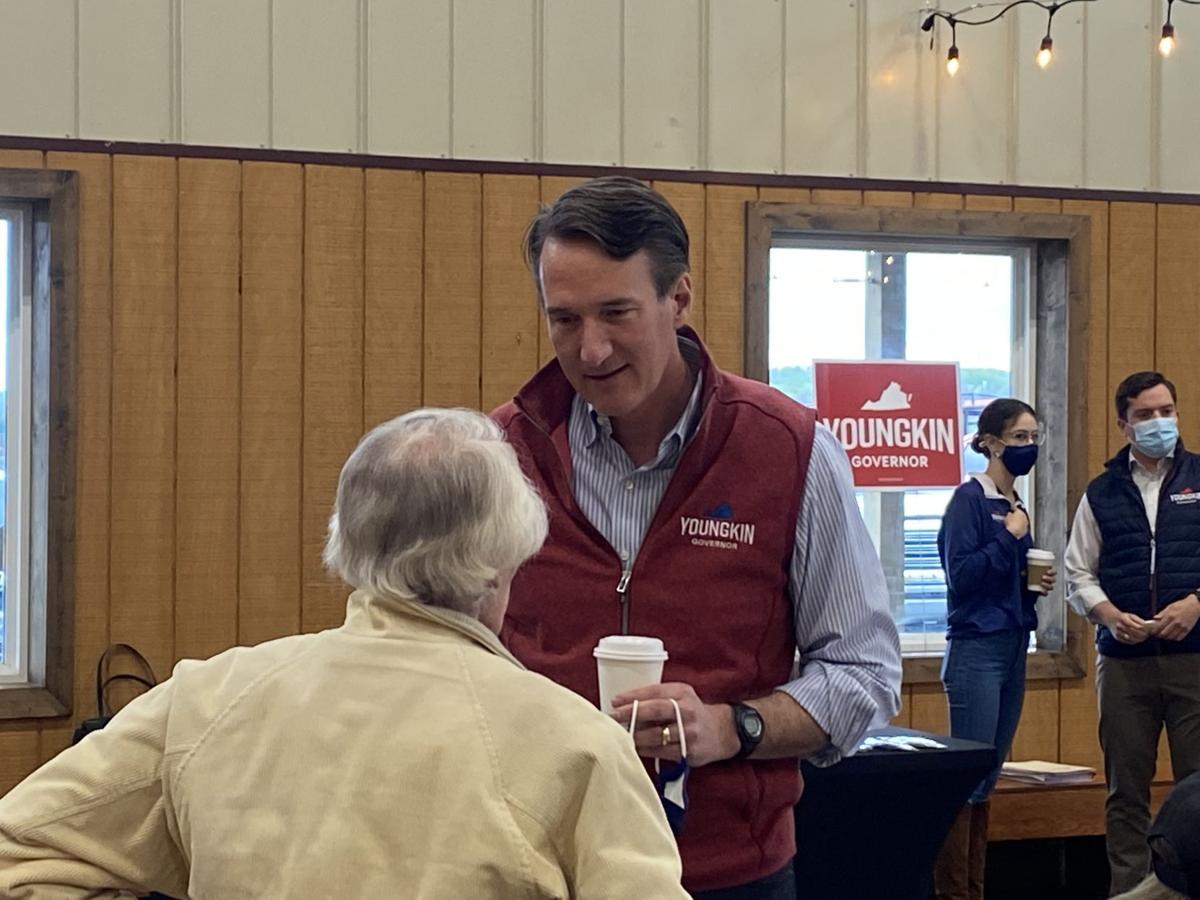 Glenn Youngkin shakes hands with voters during a campaign breakfast in Frederick County. 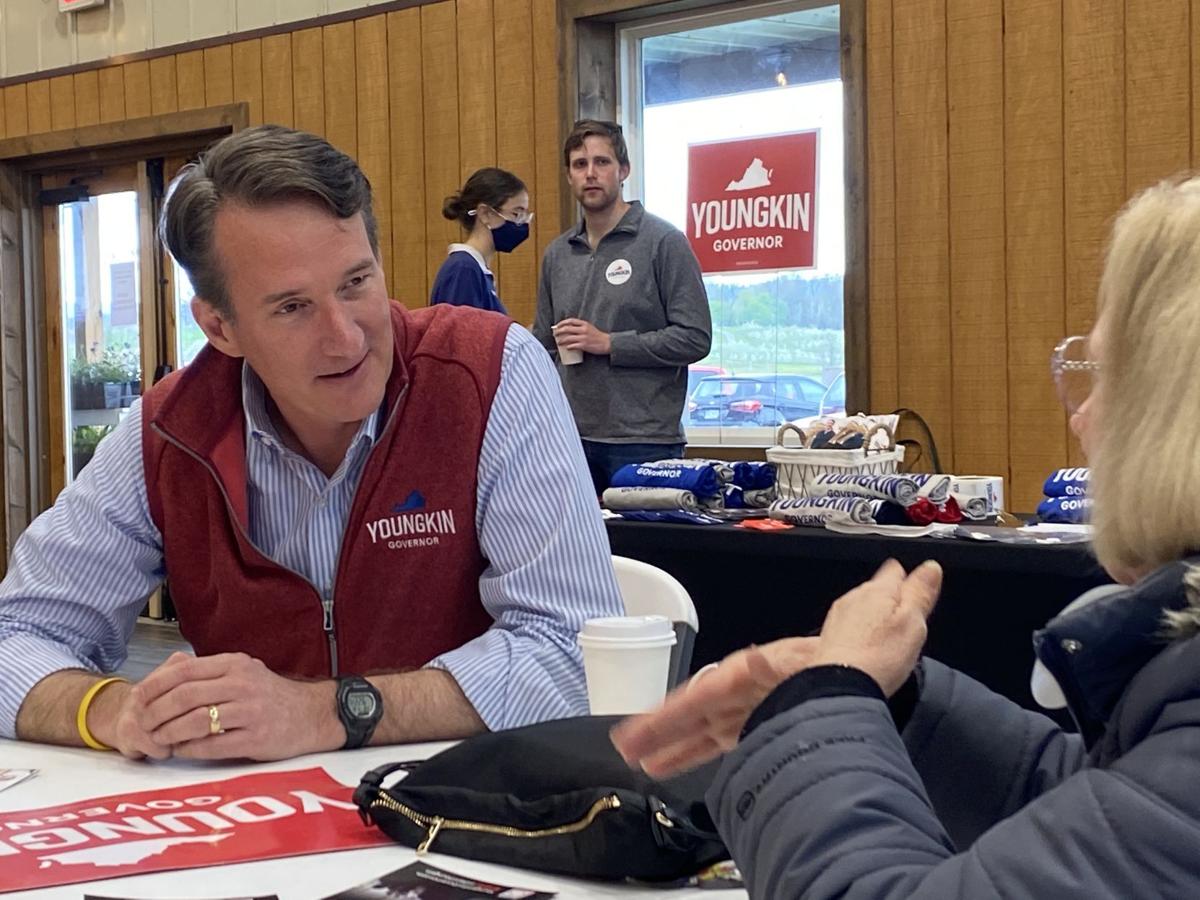 Glenn Youngkin listens to voters while campaigning in Frederick County.

Glenn Youngkin shakes hands with voters during a campaign breakfast in Frederick County.

Glenn Youngkin listens to voters while campaigning in Frederick County.

WINCHESTER — Gubernatorial candidate Glenn Youngkin stopped by West Oaks Farm Market on Friday morning to make a case for why Republican voters should select him to be the GOP nominee in the Nov. 2 gubernatorial election.

On May 8, the Republican party will hold a convention to choose its candidates for governor, lieutenant governor and attorney general.

Youngkin, who previously served as CEO of the private-equity firm Carlyle Group, described himself as a “homegrown Virginian” who grew up in Richmond and Virginia Beach. He encouraged the crowd of roughly 40 people gathered at the West Oaks Farm Market to help Republicans take control of Virginia’s leadership.

“I don’t recognize this commonwealth,” Youngkin said. “She’s in the ditch. Democrat leadership has put her in the ditch, and we’re collectively going to work to get her out.”

Youngkin spoke against high taxes and said that he will “revitalize, reinvigorate and rebuild Virginia’s economy like never before.” He criticized Gov. Ralph Northam’s COVID-19 restrictions, which resulted in schools, businesses and churches having to close their doors at various times last year.

He said he would challenge Big Tech and other institutions on what he considers to be the stifling of conservative voices. He accused colleges and schools of intimidating students from expressing conservative views and said, as governor, he would combat that.

“It’s just not right,” Youngkin said. “A governor has to stand up and say ‘that’s wrong,’ not sit in the corner and let it happen. And Big Tech is censoring and choosing what we see.”

He also voiced support for the Second Amendment, opposition to abortion and promised to ramp up security efforts to ensure “election integrity.” The Star was unable to get clarification after the event as to whether Youngkin believed the 2020 presidential election was unfair or fraudulent.

“I’m a gun owner,” Youngkin said. “I believe in the right to protect my family, to keep and bear arms. And finally, I’m pro-life. Unabashedly.”

“I know it’s a really tense and difficult time for law enforcement,” Youngkin said. “They need to know that while we don’t condone mistakes, we cannot allow them to be defunded, demoralized, demonized. We cannot.”

Youngkin also said he wanted to promote school choice and help parents who may not want their children in public schools to be able to have alternatives, such as charter schools. He also opposes efforts to repeal Virginia’s right-to-work laws.

He said the Republican party needs to do a better job of reaching out to minorities and women. He said candidates must listen to minority groups throughout the year — not just in October when they need votes. He said many white Republicans share more values with some minorities than they realize.

Youngkin said he brings a fresh perspective to the race as he is a political newcomer who has not spent his life trying to win offices.

“I have a 30-year business career that has real-world experience that is so different from any Republican, any Democrat,” Youngkin said. “It’s prepared me in a way on how to understand how to get things done in a complicated, big organization. How to deliver as opposed to making empty promises. How to set expectations and hold people accountable, including myself. I believe that as a candidate in this, I’m doing this because I want to work for Virginians — not take a governor’s mansion, not achieve a title. But, in fact, go work for Virginians to make Virginia the best state in America to live and work and raise a family.”

I'm a Republican but will not support anyone who thinks, "right to work" is okay. That does not support the worker at all and only benefits the company. I'm sick of the loonies in my party. I vote for sanity these days, no matter what the party.

Glad we'll be getting rid of old blackface. Shameful man.

"old blackface" as you so fondly call him has done many good to great things that have benefited the disenfranchised in our State. Many of my black friends find Northam to be one of the best Governor's in memory despite his vmi and blackface transgressions. Black people seem to have an enourmous propensity to forgive but not forget.

Any candidate that supports the SPLC hate machine isn’t a credible option.

"He said the Republican party needs to do a better job of reaching out to minorities and women."

this good ole boy is a comedian ...LOL

"The Star was unable to get clarification after the event as to whether Youngkin believed the 2020 presidential election was unfair or fraudulent." the whole voting integrity nonsense he spoke answered that question. he is just another lying white supremacist republiclan.

has he been to mar a lag O to kiss the "ring" of the republiclan cult messiah... until then, his candidacy is illegitimate

"He said the Republican party needs to do a better job of reaching out to minorities and women. He said candidates must listen to minority groups throughout the year"

Leftist translation: Just based on this alone, I can tell he's a white Nationalist and has done nothing good with his life... ever. Probably a gun-strutter and not smart enough to follow "the science" of Teen Vogue...

Mr. Youngkin, you already have my vote.